10 Things to Enjoy in Camotes Islands 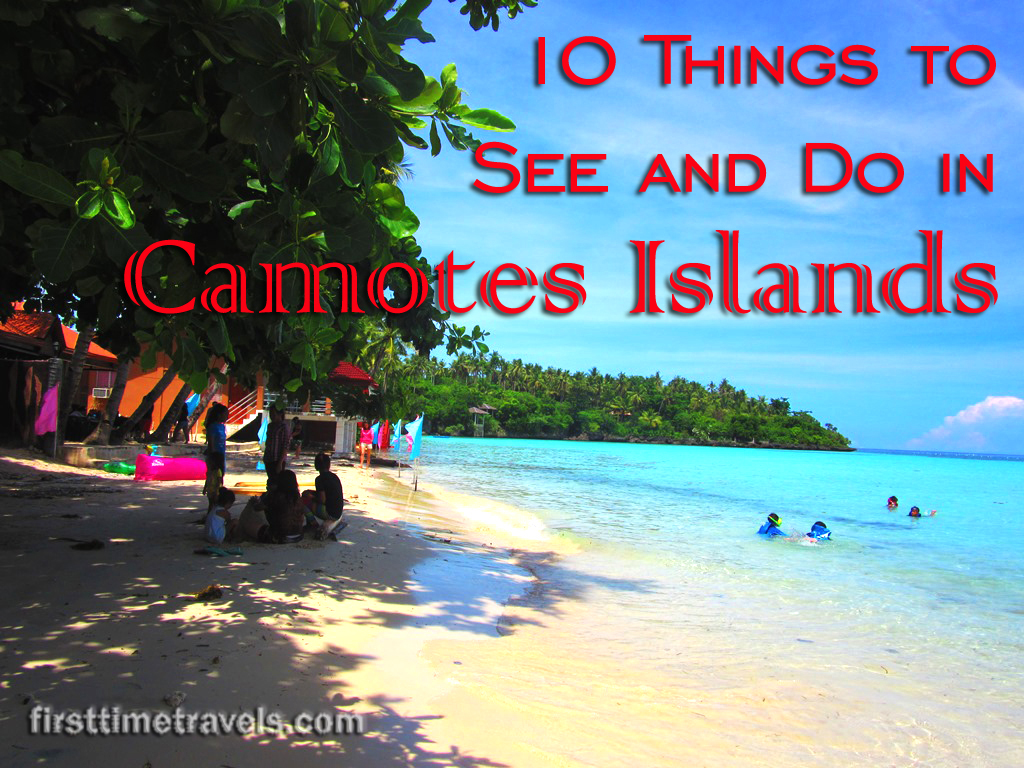 I have given you a preview of our Camotes Islands adventure (READ: First-time in Camotes Islands) in my previous post, which details how to get to this island group in the province of Cebu. You can also read about where we stayed and the other resorts we visited through my blog post Masamayor’s Beach House and Resort.

It is such a piece of paradise; one of the treasures of the over 7,000-island country of the Philippines. Two nights and two full days in Camotes Islands seem too short so we made the most of our time in this tranquil part of the archipelago.

It was a relaxing trip in Camotes Islands, especially with this serene ambiance.

Here are 10 things we enjoyed while in Camotes Islands:

When the tide is low during early mornings and late afternoons, Santiago Bay is a large white sand playground where people can run around, roll on the sand and make sand castles. When water gets into the bay during high noon till early afternoon, it is like a giant swimming pool, with its clear waters and serene surface.

You’ll see plenty of things happening in Santiago Bay – kayaking, yachting, jet skiing, among many things. At one end of the bay, there are rows of restaurants and eateries where you will hear shameless singing as the sun sets. The shore is also filled with tents of travelers who prefer to camp it out in the beach. Parties and dining by the seashore is also a common sight, especially during weekends.

There are plenty of things to see and do in Santiago Bay. This is the view during the mornings.

The wide white sand beach in Santiago Bay emerges when the tide is low.

The water slowly rises and Santiago Bay looks like a giant swimming pool.

In one end of Santiago Bay is a row of eateries where people hang out all day long, especially at night.

Mangodlong Rock is filled with white sand beach and a rock where a giant slide in the shape of an octopus that leads to the sea is built on it. A number of cottages were also built on the rock. Visitors like to swim in this part of Pacijan Island as they can choose between the sandy area or the rocky part. There is a restaurant and resort in Mangodlong Rock while a small swimming pool is also available in the resort. Entrance to Mangodlong Rock Resort is Php20.

Slides shaped like an octopus is found on the rock. So are some huts and cottages.

The resort in Mangodlong Rock has a restaurant and a swimming pool. Plus, this access to the beach front.

Get a beautiful view of the beach and the rock from this vantage point.

The entrance at Paraiso Cave, with a fee of Php25.00 per person, is well manicured. A coffee and souvenir shop stands before the gate while small huts dot the lawn. An arch marks the opening to the cave. Steps were carved out that lead down to the cave’s interior. A few steps below reveal the clear pool of water inside the cave. Visitors can swim here, for an additional fee of Php10.00 per person. A guide mans the inside of the cave, checking who swims and who does not. There are seats available inside and a small terrace was made that gives a top view of the pool.

The gate leading to the Paraiso Cave. At the left side is the coffee shop with souvenir shop.

The huts across the coffee shop just by the entrance gate of Paraiso Cave.

The opening to Paraiso Cave. One has too go down to enter the cave, as most caves are in Camotes Islands.

The interiors of Paraiso Cave.

The natural pool inside Paraiso Cave.

In Pacijan Island in the municipality of San Francisco lies Lake Danao, which has two islands within. With an area of 680 hectares, it is considered as the biggest lake in Cebu province, if not in the whole of Visayas. At the entrance of Lake Danao Park are cottages with activities for boating, kayaking and horseback riding. Other plans in the area are zipline and cable car. Entrance to the park is Php15 per person.

Horseback riding is one of the activities in Lake Danao.

Kayaking is one of the activities in Lake Danao.

There are picnic tables at the Lake Danao Park.

There are many houses around Camotes Islands that are into Soli-Soli weaving, a form of mat made of local reeds found in Lake Danao. We passed by one of these houses just near the entrance of Lake Danao Park and decided to stop and watch the women do the weaving. They were homemade mechanized set-up that makes the weaving easier and faster. A mat only costs Php100.

A sample of the soli-soli mat. This costs only Php100.

The house of the soli-soli weaver.

6.) Pools and grotto in Timubo Cave

Most of the caves in Camotes Islands are found underneath and same as the Paraiso Cave, we went down a series of steps to enter Timubo Cave. But this one was more challenging than Paraiso Cave. Water was dripping from a low-ceiling trail as stalactites and stalagmites fill the short gap between the ground below and the hard rock above. As we got to the bottom, we had to cross two small pools in a narrow passage before we got to the bigger pool where a small manmade grotto stood at one wall of the cave. The interior of Timubo Cave is darker and looks more dangerous to swim. There was no guide manning the interior and no control on the visitors which just kept pouring in. The smell inside was not amiable at all. Entrance to the cave is Php15. There are food stalls at the parking lot near the opening of the cave.

The entrance to Timubo Cave.

Getting down inside Timubo Cave.

The narrow passage at the lower portion of the cave.

The small grotto inside Timubo Cave.

The pool inside the cave.

The Baywalk Trail is where many people hang out to enjoy the breeze, wait for the sunset or view the mangrove forest that stretches between Pacijan and Poro islands. Others can bike here or walk around the Baywalk Trail.

The mangrove forest that connects Pacijan and Poro islands in Camotes.

Just near the Baywalk Trail is the San Francisco market where one can find various fruits and vegetables, as well as fresh meat, fish and seafood. At night, a portion outside the market is like a mini-food park where visitors can dine in the open and choose from the many grilled and barbecued food choices.

The food park at the market, which is also at the Baywalk Trail area.

We were trying to catch before the day ends when we headed to Bukilat Cave, located at Tudela town, at the other end of Poro Island. It was a long drive getting into the cave and once we got there we found a large tree providing shelter to the opening of the cave. Bats were flying out as the last rays of the sun were dimming. It was a few steps getting down to Bukilat Cave. A large portion of its interiors was a pool of shallow water. A narrow elevated walkway is available in one side of the cave. There were rocks in certain portions of the cave formed out of the stalactites and stalagmites. Openings on top provide natural light to stream inside the cave. Entrance to the cave is Php20.

Near the opening of Bukilat Cave taken from the inside.

The cave has many rock formations.

Light streams from the “roof” opening of Bukilat Cave.

Go cliff diving or snorkeling at Buho Rock, a rock formation that is shaped like a ship. This is an abandoned resort in the town of Poro, which is now managed by the local government. Entrance to the resort is Php20. When we got there the sun was setting at the horizon, so we opted instead to just take some pictures and watch the sky turn from orange to blue.

The blue sunset as seen from Buho Rock.

2 thoughts on “10 Things to Enjoy in Camotes Islands”

← First-time in Camotes Islands ← Jitaku Private Resort: In the Heart of Bacolod