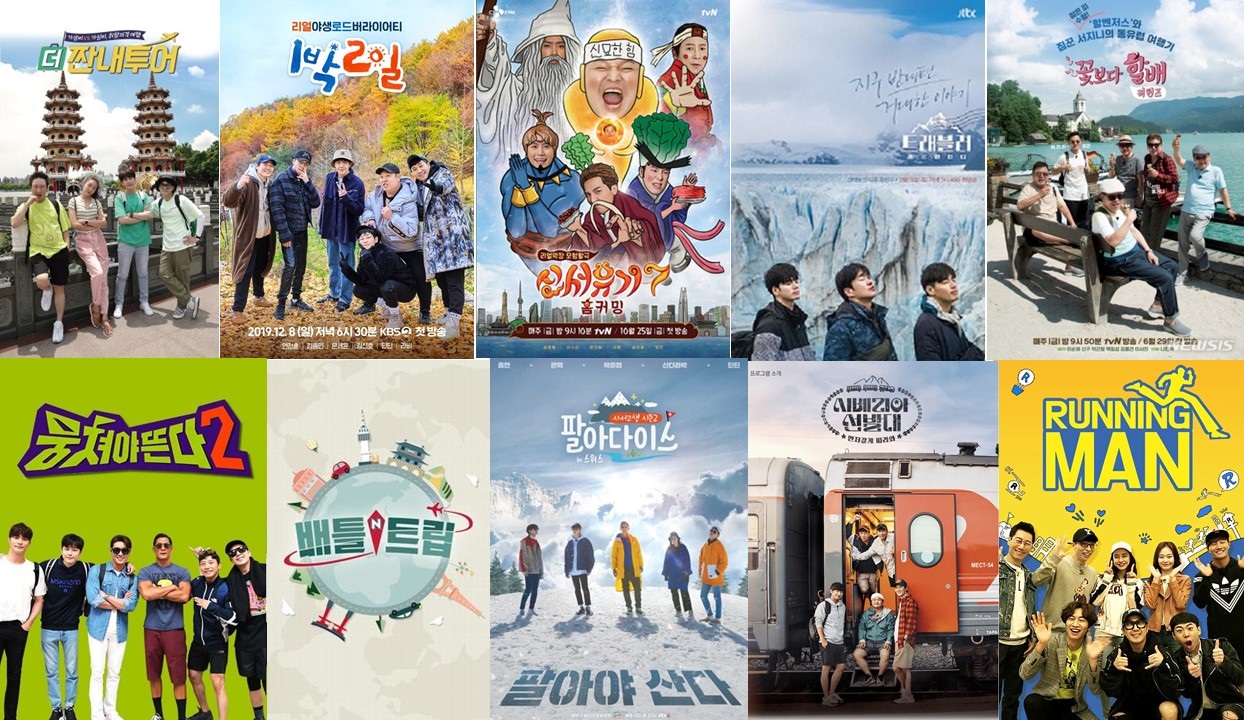 Call me a late bloomer, but it was only a few years ago when I started binge-watching Korean TV shows, K-dramas included, with a preference on variety shows with travel themes. It may be many years too late, as I’m no longer in an industry where I get to see them in person whenever they visit the country. But working at home and the rise of entertainment apps have made me a fan of Korean variety shows.

I have listed the shows I watch and those that are still on queue for some marathon watching. What made these shows interesting is that they visit wonderful places and they put a twist on how to make the experience engaging to viewers, not just a documentary-type of presentation. Some of these shows have ended their seasons (I’m looking forward to new seasons if there will be any in the future), but they are still available online through streaming sites and apps.

This is my favorite show to date. It began in August 2007 and is now on its 4th season with members are Yeon Jung-hoon, Kim Jongmin, Moon Seyoon, Kim Seonho, DinDin and VIXX’s Ravi. The longest-staying member is Kim Jongmin who has been around since Season 1. Although season 3 — composed of Kim Junho, Cha Taehyun, Defconn, Kim Jongmin, Yoon Siyoon (Donggu) and Jung Joonyoung, with Lee Yongjin as an intern — ended abruptly because of a member’s scandal, it is still my favorite season, and the longest one, so far. The show 1박 2일 or 2 Days 1 Night takes on the “Real Wild Road Variety” approach in its program, traveling around Korea, showing its sights, history and food through a fun adventure filled with games and challenges. The show was recently given the Presidential Commendation by the South Korean Ministry of Culture, Sports & Tourism. The show made history when it climbed Mount Paektu in Season 1 and visited the DMZ in Season 3.

Celebrities compete by going to places in South Korea and abroad, featuring attractions, food and activities in their respective destination. Budget is also considered. The former format had the audience vote for their preferred trip. In special episodes, guests or MCs act as judges. But with the change in the program format, there is no longer an audience that can vote on a particular trip. Some celebrities travel in pairs in the same location but with different itinerary and they compare which one has a better itinerary.

Two or three of the cast members or invited guest compete on which one was the best tour guide for the trip. Current cast members are Park Myungsoo, Han Hyejin, Lee Yongjin, Super Junior’s Kyuhyun, Kim Junho. The tour guides, usually one of the members or a guest, have to stick to the budget and the criteria for the trip. The former format was that the winning guides enjoy a luxury of their choice in the given destination. But as it did a reformat after a major change in members’ line-up, the luxury now is given when they are able to accomplish a hard task or activity set by the staff. As the primary purpose is to stay within budget, members usually commute or walk from one destination to another, really my kind of traveling.

The show has already finished season 2. Guests join cast members are Park Joonhyung, Eun Jiwon, and Sunghoon as they visit a place through a package tour. Members and guests individually rate based on their experience. It’s a good way to know the place and try activities based on the tour packages that they avail. They are often joined by other travellers that take part in the tour.

The season 2 of this travel variety show ended in 2018 wherein the cast of Park Joonhyung, Eunhyuk, Sandara Park, JR of NU’EST, and Dindin travelled to Switzerland and made money by selling Korean products in markets. They also did other activities to earn as well as see the many attractions in the country.

The season 1 of this docu-variety show featured actors Ryu JunYeol and Lee JeHoon backpacking in Cuba. They did everything from arranging their transportation, accommodation and itinerary. Their purpose was to find their true self, so they will narrate their experience, from what they see, feel and perceive. Season 2 is composed of Ahn Jaehong, Kang Haneul and Ong Seongwu traveling to Argentina. They showed activities to do and places to visit in a particular city or destination, including their encounters with the locals.

It has an “urban action variety” feel wherein the cast members Yoo Jaesuk, Kim Jongkook, Haha, Lee Kwangsoo, Ji Sukjin, Song Jihyo, Jeon Somin and Yang Sechan and guests participate in a mission. Episodes are held at a certain landmark and are often shot on locations abroad. Winners get a reward or are exempted from punishment. But the way they do the activities can have you laughing. So, get ready to have your tummy ache from so much laughter while enjoying the show’s setting whichever location it is shot.

Unlike other shows, this travel TV show features veteran actors, some of them in their 70s. They go on trips abroad and feature the various attractions of the places while the members inject their stories and humor. The last run of the show had Lee Soonjae, Shin Goo, Park Guenhyung Baek Ilseob, Lee Seojin, and Kim Yonggun as its members. They feature attractions that may be of interest to viewers, particularly those in their ripe age.

New Journey to the West

With Na Youngseok as director, who was the director of 1박 2일 season 1, New Journey to the West Season 1 reunited Kang Hodong, Lee Soogeun, Eun Jiwon and Lee Seunggi of 1박 2일 season 1. The last episode of New Journey to the West was already in season 7 with members Kang Ho-dong, Lee Soogeun, Eun Jiwon, Song Mino, P.O, and returning member Kyuhyun of Super Junior. Actor Ahn Jaehyun who saw action from season 3 to 6 was on leave and is expected to return in the succeeding season. Each season has a theme and the members dress according to their character while traveling in the country-destination, playing games and winning missions.

Actors Lee Sunkyun, Kim Namgil, Lee Sangyeob, Kim Minsik and Ko Gyupil traveled across Russia by taking the Trans-Siberian Railway. It often shows the sights outside but most of the scenes were taken inside the train. One might wonder what to show while spending most of the time indoors, but the cast made it interesting, even giving hints as what one can do while cooped inside a moving vehicle for hours.

There are more Korean variety shows that have travel as one of their main themes. I have watched Street Food Fighter featuring Chef Baek Jongwon, Exciting India featuring K-pop stars, and other TV programs that brought me around Korea and beyond. Some of them, including those in the list above, are no longer airing but they can still be viewed online. There were episodes that have inspired me to visit a particular destination and landmark or put something in my must-visit or must-do list. I also picked certain travel tips along the way.

One thought on “Korean Variety Shows with Travel Themes”