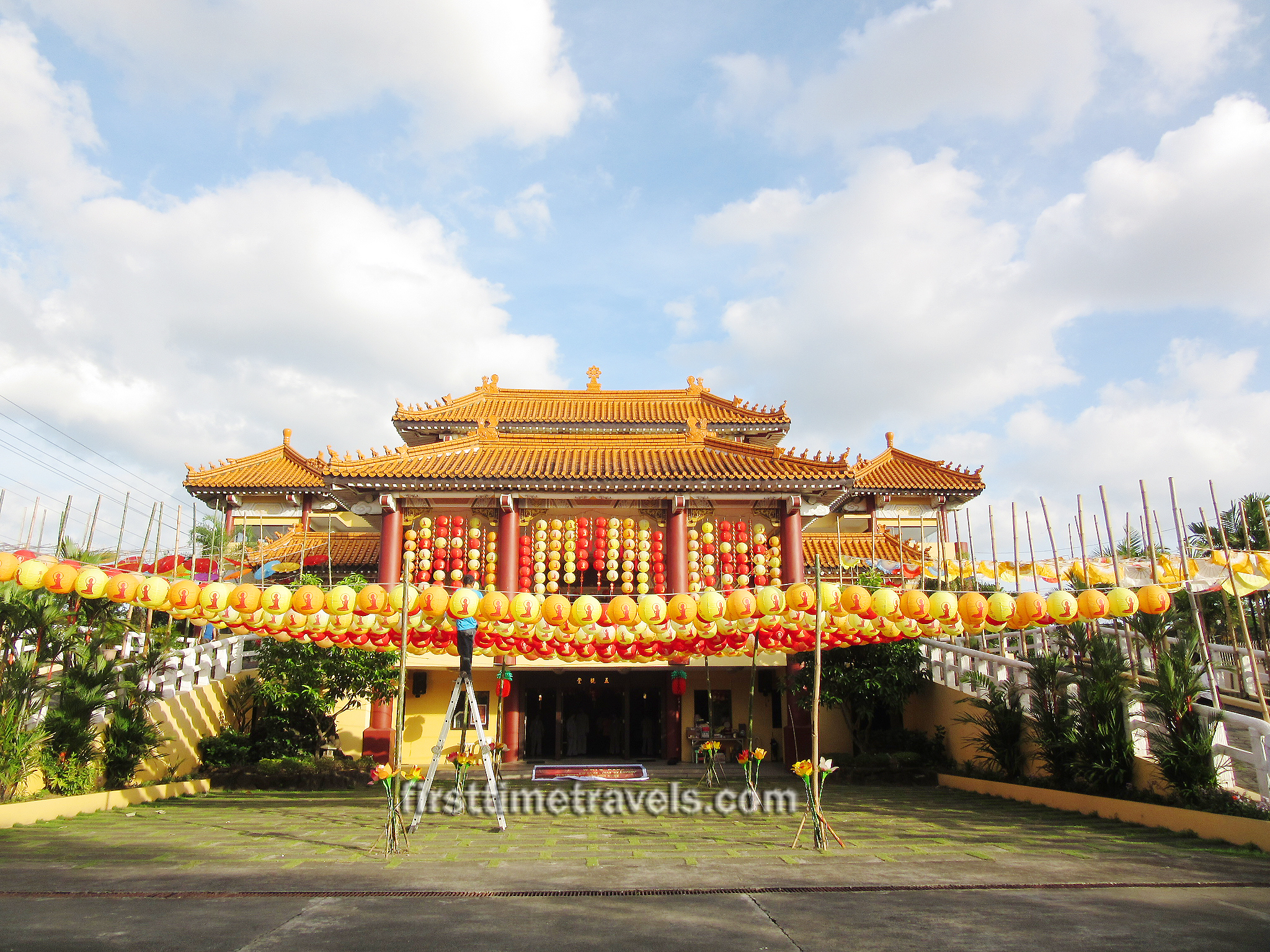 Kiong Hee Huat Tsai! We are ushering in the Year of the Rooster. And when the Chinese New Year celebrations are on the roll, Bacolod City and other parts of the Philippines also join the whole world in this milestone in the lunar calendar. Locally, we have the Bacolaodiat Festival, spearheaded by the Chinese community in our city, which includes the people behind the Fo Guang Shan Yuan Thong Temple.

Last year, My sister and I trooped to the Chopsticks alley in Lacson St. and North Capitol Road where most of the revelries happen. I wrote about it, the Chinese New Year, how it began, and our city’s local take on the occasion through my post  Bacolaodiat Chinese New Year.

The vibe along Lacson St. during Bacolaodiat

It was on our way home that we passed by the Yuan Thong Temple and got a glimpse of the colorful lanterns from the highway. We decided to stop to take photos and to roam the temple grounds. The ambiance in the temple was different from that in Lacson St., wherein the former had an authentic Chinese flavor to it while the latter was a fusion of the foreign and local feel.

This year, Yuan Thong Temple is once again opening its gates to the public who want to have a distinct Chinese feature to their New Year celebrations. The Venerable Master Zhi Yi recently provided us with a preview on what to expect during the coming weekend and beyond.

Yuan Thong Temple is getting ready for the Chinese New Year.

The temple grounds will be filled with attractions through its Food Fair and Games Stall as well as the Chinese Culture Experience and Do-It-Yourself Booths. Performances and the traditional Dragon and Lion Dance will be on hand to entertain guests. There will also be a Chinese New Year Eve Blessing Service. Activities will start from 7:00 at night of January 27 until 1:00 in the morning of January 28.

As a Chinese practice, firecrackers will be lit to drive out evil spirits. There will be a New Year’s greeting by the god of wealth, offering of incense, and distribution of gifts.

One of the rooms inside the temple.

The temple is bedecked with colors.

When the clock strikes midnight and a new day has come, Master Zhi Yi will ring the Blessing Bell 108 times to welcome the New Year in the Chinese calendar. A Chinese New Year Morning Chanting will also as the calendar turns January 28, the first day of the Year of the Rooster. At 10:00 am, the First New Moon Prayer of 2017 will take place.

The giant rooster is being set up in the temple grounds.

Many activities await in the temple, some of which will help attract good luck for the coming year.

The attractions in the temple grounds will still be available for visitors while there are other activities like experiencing calligraphy. Celebration continues the day after with the Vegetarian Food Fair, which is available only to ticket holders. Yuan Thong Temple serves healthy vegetarian Chinese food that will nourish the body.

We tried this vegetarian tempura at the temple.

The temple lights up as night arrives.

On February 11, Yuan Thong Temple will have a Full Moon Prayer for the Lantern Festival and a Valentine’s Dinner to those who have availed of the dinner tickets.

Chinese lanterns are common decors for many Chinese celebrations.

Beyond these celebrations, the temple is open to those who wants to join their activities or to those who simply wants to familiarize themselves with the Chinese culture and Buddhist traditions. They have free Tai Chi exercises from 4:30pm to 5:00pm every Mondays, Wednesdays, and Fridays. They also hve Dharma Service every New Moon and Full Moon while visitors can offer incense and flowers anytime from 8:00am to 5:00pm from Mondays to Sundays.

Tai chi is also held in the temple three times a week.

The main hall of the temple where they pray.

According to Master Zhi Yi, the temple aims to bridge cultures and exchange learnings between Filipinos and Chinese as well as among Buddhists and other faiths and religions.

Learning Cultures and Faiths through my Travels

I like learning about different cultures and traditions. Though I am a devout Catholic, I always yearn to understand other faiths and beliefs. As to the Buddhist principles and practices, I have witnessed many of them when I visited Buddhist temples in Thailand, Cambodia, Singapore, Hong Kong, and Macau. I have seen monks roam the streets of these countries, including in Vietnam and South Korea. Moreover, I appreciate Chinese history through my trips to Hong Kong, Macau and Taipei, as well as in the Chinese cities of Guangzhou, Shenzhen, Shanghai, Xi’an and Beijing.

From their architecture to their traditional costumes to their local food, I am in awe at the connections that we have with the Chinese culture as well as the distinct touches of each country in Asia.

The Year of the Fire Rooster

Each year, the Chinese calendar shifts to one of the 12 animals in their zodiac. (I learned in my visit at the Lanna Folklife Museum in Chiang Mai that the Thai Buddhists have replaced the pig with an elephant.) Also, it includes one of the five elements – fire, water, earth, wood, and metal. This practice has been around for over 5,000 years already.

One’s luck depends on the zodiac on the year of his or her birth and the animal for the current year. Some may do well during the Year of the Rooster while others may not. According to Chinese beliefs, a rooster is a symbol of punctuality and fidelity because it wakes up early in the morning, rousing people for a new day.

Whether this year is a good one for you, it still depends on your disposition, your faith, and how you deal with external factors. So, how are you celebrating your Chinese New Year?

For those who are in Bacolod, below are the activities happening in the Yuan Thong Temple and the rest of Bacolod City for the Bacolaodiat  2017 Chinese New Year festivities.