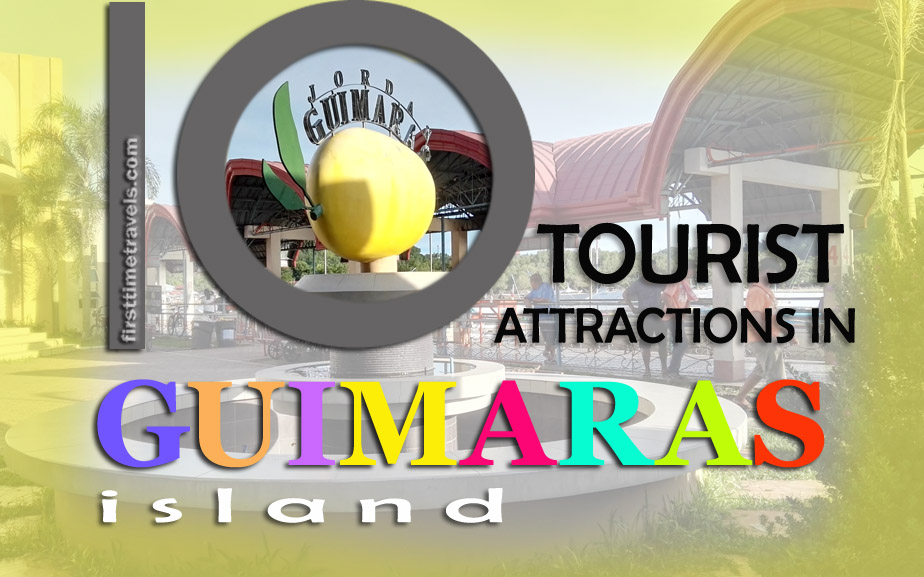 With a total area of 604.57 square kilometers only, Guimaras is considered as one of the smallest island-provinces in the 7,000 plus islands in the Philippines . It is located in the Western Visayas Region, just across Negros Island and very near to Panay Island, particularly to Iloilo. Apart from the main island of Guimaras, the province, which covers five municipalities, also has several smaller islands and islets within its political boundaries.

Upon the invitation of Nature’s Eye Resort, three of my fellow Negros Bloggers and I boarded a ferry to Iloilo and then took a 15-minute boat ride from the Parola Wharf of Iloilo City to the Jordan Wharf of Guimaras. (READ: First-time in Nature’s Resort on how to get there.)

The boat from Parola Wharf to Jordan Wharf.

The last time I was in Guimaras was when I was in fourth grade and we stayed in one of the smaller islands in the province. We only went to the main island to visit a friend of an aunt. But memories of how it looked like are now just a blur and the recent trip was a great way to help me rediscover the tiny island province just across the seas. All I know is that Guimaras is the land of the sweetest mangoes in the country but I was gearing to find out what else it has in store for us.

Our tricycle driver, Kim, met us at the Jordan Wharf and he toured us around Guimaras Island. For one full day, we traversed the highway and some narrow roads, spanning four out of five municipalities in the province. We went from Jordan to Buenavista to San Lorenzo to Jordan and then Nueva Valencia. Here are 10 tourist attractions in Guimaras that make for a great photo op backdrop for your travels.

As soon as you arrive at the Jordan Wharf, you will see a marker of a mango to welcome you to Guimaras. Before you embark on your tour, register first at the Tourism Office right at the wharf. And as you leave the wharf, the first thing that will catch your eye are the giant J-O-R-D-A-N letters right in front of the Jordan Municipal Hall. Those bold letters couldn’t be missed and it’s a nice background for your first snapshots in the province. We didn’t linger much at the “munisipyo” and went directly to our next stop.

Did you know that the smallest plaza in the country, and for some time in the entire world, is found in Jordan, Guimaras? Right in the middle of the plaza is the statue of our National Hero, Dr. Jose Rizal. The plaza is enclosed and the statue is elevated in what seemed like a concrete center stage.

The smallest plaza in the country.

Jose Rizal in the middle of the plaza.

Heading to the town of Buenavista, we first made our way to the Saint Isidore Parish Church, or often called as the Navalas Church. It is an old church that dates back its origins in the late 19th century. With its construction between the years 1880 to 1885, it is the considered as the oldest edifice in the whole province. Since it is made of limestone, it was susceptible to harsh weather and degradation. Over time, it was reinforced with concrete and went through renovation, but sparing the façade from changes in order to maintain the original form of the church. Right at its entrance is the belfry of the church, separate from the main structure and serves as an entry way to the property.

The oldest edifice in the province is this church.

The bell tower which also serves as an entry way to the church compound.

The inside of the church looks new.

The facade remains intact, however.

A heritage house of the Lopezes, Roca Encantada sits on a rock, with a spectacular view of the famed “Siete Pecados” islets from its balcony. An entrance fee of P50 per person is required to be able to access this private property. We climbed the steps to this modern-looking house and at the topmost step is engraved “Roca Encantada | 1910 | In Memory of Doña Presentacion Hofileña Lopez”.

Roca Encantada is a heritage house owned by the Lopez family.

Siete Pecados can be seen from the balcony.

The terrace is a relaxing spot with a beautiful view.

Visible from Negros Island (and from the plane when you fly over Guimaras), these windmills are scattered in the part of Buenavista that is facing the sea. We went to a hill where we were able to go up close one of the windmills. The coast and the rest of the windmills were a breathtaking sight and we couldn’t help but have our photos taken with the giant turbines.

These giant turbines have become a tourist attraction.

They are visible from Negros and from the plane.

With life-size statues of religious icons depicting the different scenes in the Way of the Cross, the Holy Family Hills is a Catholic site that is popular among pilgrims especially during the Holy Week. Built in the year 2000 within the 52-hectare land, Holy Family Hills is run by the Eucharistic Disciples of St. Pius X. Apart from the Way of the Cross, also found inside the property is the Holy Family Shrine, a chapel, a garden and other attractions. Entrance is free but you can drop any amount as donation right at the gate.

A “PEACE” sign near the entrance of the property.

A hut shaped like a coconut and made of coconut materials and other indigenous products.

Life-size statues depicting scenes in the Way of the Cross.

Guimaras only became a province in 1992. Its provincial capitol is already of modern architecture as compared to other provincial capitols in the Visayas area. Large GUIMARAS letters also stand in front of the capitol. Beside it is the museum with a monument of a local “manggagawa”, which represents fisher folks and farmers, on top of the building.

Guimaras seems to have a penchant for giant letters.

After our sumptuous lunch filled with mango-inspired dishes at the Pitstop in Jordan proper, we went to the Department Of Agriculture-Bureau of Plant and Industry National Mango Research and Development Center or NMRDC to see the mango plantation. Guimaras is known for its sweet variety of mangoes that they are even served in palaces and presidential residences abroad. Take shelter under the wide canopy of mango trees for an Instagram-worthy photo.

Our ride for the entire day.

Pre-nuptial photo shoots are also done under the canopy of these trees.

The Our Lady of the Philippines Trappist Abbey is home of the Contemplative Trappist Catholic Christian Monks in the country. People come here to pray, reflect, meditate or take a spiritual retreat from the daily grind. But apart from the quiet surroundings, visitors also come here to bring home religious and food items in their gift shop. Most of the food products have a mango flavor that people want to try and taste.

The chapel inside the monastery.

The sell various goodies in this gift shop.

Built in the 18th century as a Spanish parola, the ruins of the Guisi Lighthouse is a favorite spot for picture-taking. Perched on a cliff and overlooking the sea, the arches and plants growing on its walls provide an artistic character to the whole place. There’s a modern lighthouse built in the ruins but the old one, though rusty, still stand as testament of its role many years ago.

The ruins is a favorite venue for photography.

This used to be a Spanish colonial parola.

The view of the sea, framed by the arch, is a wonderful scene.

The old lighthouse still stands, though rusty, but climbing it is prohibited. A modern tower is built nearby.

There are several other places to see in Guimaras — waterfalls, eco-parks, forests — but we couldn’t do them for one day. Apart from exploring Guimaras inland, its coast and surrounding islands shouldn’t be missed. I’ll be writing more about the Taklong Island National Marine Reserve (TINMR) in my next post.

If you want to tour Guimaras Island, you can hire our tricycle driver Kim Amata at +63 950 825 7904. If he is not available or if you are a big group and will need another tricycle, he can refer you to his friends and family members. Whole day rate for the tricycle, which can fit five people, is Php1,500 while a habal-habal or a single motorcycle, which can carry two people (apart from the driver), is at Php1,000*. Ferry from Parola Wharf, Iloilo City to Jordan Wharf, Guimaras amounts to Php14.00* per person (the same cost on the way back).

*Rates may be subject to change without prior notice.