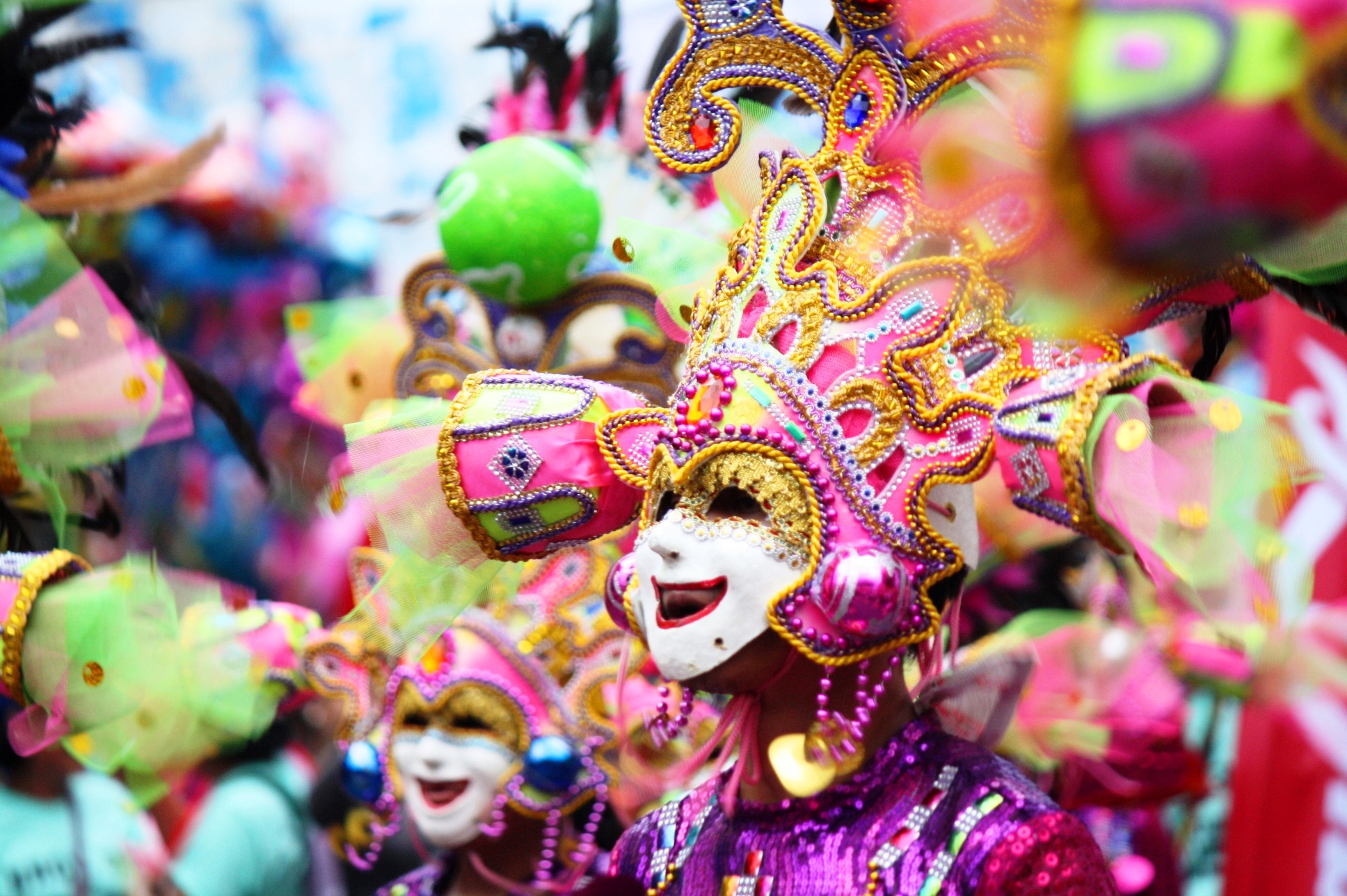 I was eight years old and I was standing in front of my mother’s office right across the city plaza watching with awe the crowd gathered along the side walk. I squeezed my tiny head in between two adults so I could get a glimpse of the parade and street dancing.

Colorful masks are one of the main features during the dance parade. Photo taken from http://www.themasskarafestival.com.

Men and women in colorful costumes, beautiful headdresses and fancy masks were dancing to an upbeat music. The plaza was surrounded by stalls selling food and items of different kind. Everyone was laughing and having fun. This is my earliest recollection of Bacolod City’s Masskara Festival.

Masskara Festival’s origin is a bit unusual. Negros Occidental was the country’s sugar bowl with Bacolod City as its provincial capital. The province has enjoyed so much opulence due to the booming sugar industry in the world market. In fact, the island has, for quite some time, even separated from the Philippines when it declared itself as the Republic of Negros because it could already sustain itself. But the independence was short-lived. And so was the affluence.

Bacolod is proud of its artists. The creativity of Bacolodnons shine during Masskara. Photo taken from http://www.themasskarafestival.com.

When the sugar industry hit its lowest, Bacolod’s economy also took a downturn. Add to this was the tragic sinking of MV Don Juan that lost the lives of many Bacolodnons. Instead of wallowing in sorrow and facing the trials with defeat, the people took a good fight and confronted their challenges head on.

Bacolodnons and Negrenses are known for their fighting spirit. During the Spanish regime, the people fought and won over their conquerors when they tricked their captors by attacking them using bamboo and woven materials painted and shaped like canons and rifles.

With the economic crisis, Bacolod City came up with a celebration to rise from the gloom and uplift the people’s spirits by turning adversity into something positive. Thus, the birth of Bacolod’s Masskara Festival.

Masskara comes from two words “mass”, which stands for the people, and “kara” or face. The festival symbolized the ability of Bacolod to smile over hardship and difficulty. Anyway, Bacolod City is not called the “City of Smiles” for nothing.

To date, Masskara Festival brings in revenues to Bacolod through tourism, being one of the prime fiestas in the Philippines. People within and outside Bacolod troop to the city each October to join in the revelry. Year in and year out, the organizers come up with different activities, like pageants, concerts, exhibits and fireworks display, attracting millions of people. Masskara’s Latin flavour and Filipino excitement can match, if not rival, the many mardi gras festivities and carnivals all over the world.

The main highlight is the Masskara street dance that showcases the creativity and artistic ingenuity of Bacolodnons. Various barangays and participants compete fiercely to come up with the most beautiful performances and masks.

Masskara Festival is not just about coming together. It is also about giving thanks for the many blessings the city has received. More importantly, it is a reminder that people can always take a positive outlook to life regardless of the situation one has. All in all, Masskara is Bacolod’s triumph of the people over challenges.

3 thoughts on “Behind Masskara’s Smile”