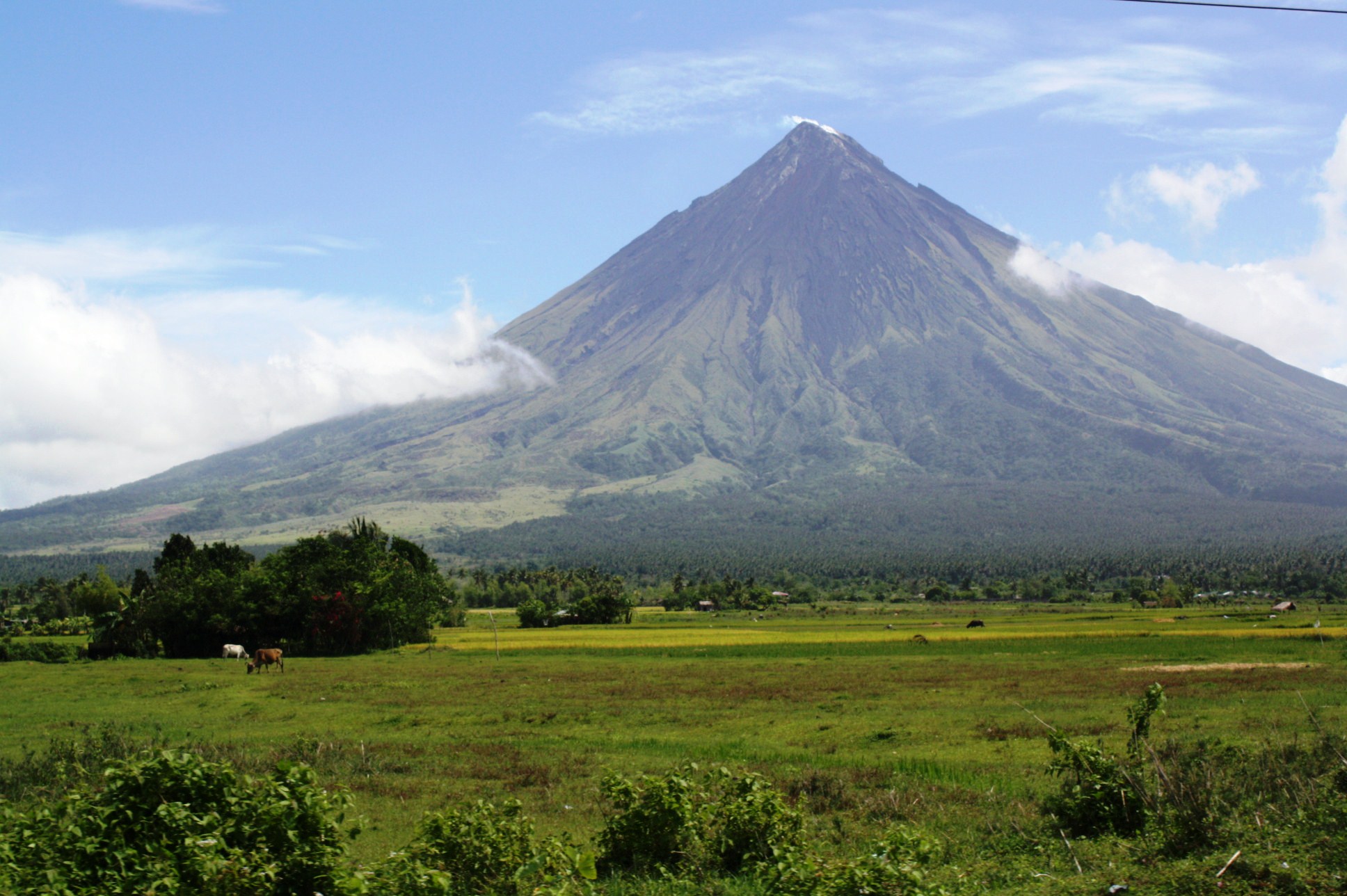 Albay is not a usual tourist destination. Located at the Bicol peninsula, about 460 km or 287 miles south of capital Manila, there are so many things that remain undiscovered in Albay. Albay came from the word Albaybay which meant “by the bay”. The first thing people picture when in Albay is the cone-shaped Mayon volcano which remains to be a beauty whether it’s in its active or dormant mode. I think I’m lucky that in my first visit, Mayon showed its beauty. It sometimes hide beneath the veil of clouds and they say you are one fortunate visitor if it shows itself to you.

Being a peninsula and boasting of one of the wonders of the world, Albay is known for its numerous natural treasures like waterfalls, caves, natural springs, beaches and marine life. The town of Malinao, Albay has the Vera Falls and the Palale Falls which are both used for ecotourism.

The local cuisines are delectable given that this is the only region in the country known for its spicy food, something that it shares with other Asian cuisines. Try the Bicol Express and the Pinangat, two of its popular spicy dishes. Pinangat and Bicol Express are popular Bicolano dishes which both uses gata or coconut milk, a staple ingredient of the local cuisine. Pinangat is made of shredded young gabi or taro leaves, shrimps, pork and ginger, wrapped in whole taro leaf and cooked in coconut milk until done. Another version of this is the tinilmok, whose filling is sliced lukadon (young coconut meat) and small shrimps. The Bicol express is a fiery dish made of sili (chili) with pork and cooked in gata. You can buy these delicacies in Camalig, a town in Albay known to have the best makers of these food products.

Old churches are in almost every town and municipality. In Sto. Domingo, Albay, we visited the St. Dominic Guzman Church made of large stones and has an architectural design that is a mix of local and Spanish influence. Historical sites found in the province are the Battle of Legazpi Trylon, Jose Ignacio Paua Monument, Old Albay, Simeon Ola Monument, Guinobatan and the Andres Bonifacio monument in Sto. Domingo. The National Museum in Cagsawa contains geological finds from Mayon.

For those shopaholics who are on the lookout for nice native stuffs to bring home, there are plenty of the finest abaca handicrafts, cutleries and ceramics. There’s the Pasalubong (take home goods) shopping in Cagsawa Ruins, Albay Pasalubong Center at the Albay Astrodome compound, and Handmade Paper Factory in Sto. Domingo.

Taking the train from Manila to Bicol sounds adventurous but may be a bit uncomfortable and time-consuming. Same can be said in taking the bus. However, there are first-class buses complete with an attendant, spacious seats, blankets and meals. Buses that ply the Bicol route are mostly in the Pasay and Cubao areas of Metro Manila. Philtranco is the first-class bus that will give you comfort and convenience during the trip.

Flights from Manila going to Legaspi City may only last less than an hour but only that you have to pay more than double than the bus and train fares. By the time you get to Legaspi, jeepneys are everywhere which can take you to various points of Legaspi and Albay.

If you contact the Department of Tourism of the Philippines, there are travel packages available and they may even coordinate local agencies to provide you with vans to take you around. Here are some of the places I have visited in Albay in my first two visits there.

A church and convent used to rise at Cagsawa. But with the major eruption of Mayon in 1814, the church was buried beneath the hot lava. The local people of Cagsawa took refuge at the church but they later perished when the church was engulfed by lava. Many lives were lost. But their memory lives on. Photos of the eruption are sold at the ruins.

To date, only the church bell tower was left which now becomes a popular foreground in many Mayon pictures. Tourists now flock at the ruins to personally view the majestic Mayon and Cagsawa. Large rocks are also scattered at Cagsawa. They are evidence of the fury that Mayon once displayed. The National Museum there preserves the life of people before the Mayon eruption in the 19th century.

Cagsawa is a few-minute ride from Legaspi. This can be visited by private cars, hired vans or jeepney and tricycle. Buses from Manila pass by Cagsawa and if you take the bus, you may get down at the entrance of the Ruins and ride a motor-run tricycle to take you at the site. At the Ruins compound, there are eateries and souvenir shops where you can have picnics and do some shopping of souvenir items. If you run out of film for your still camera, there’s a shop that sells Kodak items there.

Pili is a famous product of Albay. Pili nuts are a little bigger than cashew nuts and a bit smaller than walnuts. They are sometimes coated with sugar to make the nuts taste sweeter and more delicious. Others have hardened caramel coats that make them taste like candies.

Pili is grown in Albay which is an agricultural province. It has become one of the native products of Albay and locals come up with variety of Pili delicacies to sell to tourists and in local trade shows. As a tourist, if you do not bring home Pili nuts, it’s as good as saying that you haven’t fully experienced the beauty and delights of Albay.

You can buy Pili almost anywhere in Legaspi City but locals will point you to a souvenir store where many celebrities come to purchase variety of pili nuts products. True enough, walls of photos of known personalities who visited the store are displayed at the shop. The store is like an old house transformed into a shop. It’s near the center of the city and a walking distance to an ATM machine.

There are several islets off the shore of Albay. It must be because of the presence of Mayon that these islands were born due to its volcanic eruptions and activities. Some where uninhibited while there are some that were being developed as a beach resort. But what’s good with the resorts there was that they weren’t commercialized and still maintained their natural beauty.

We boarded a small pump boat in the local port of Sto. Domingo, Albay. The boat is part of a tour package we obtained from the Tourism office. Our guide was with us giving us background of the places we will be visiting. The boat took us to various islands off the shore of the small town.

It seemed like eternity before we reached the end of the main land and then islets started appearing in front of our very eyes. It was such a wonder to see some small huts with smoke coming out of it in the islands. There was a cable that connects the main land with the small islets but it was obviously no longer being used and has just become one of the landmarks where guides can take their visitors.

We stopped in one of the islands because our guide has to drop off something to a family. I don’t think the courier ever reaches their place that’s why they rely on people working in tourist offices and agencies as well as with fisher folk to deliver and receive letters and packages.

The sun was up and there are parts of the water that are shallow which makes it easy for people to cross from one islet to another. But you can never really be sure because there are certain points where the water suddenly becomes deep.

As we emerged from the groups of isles towards to open sea, we were astounded to find the beauty of Mayon volcano, with its perfect cone, with the blue waters in the foreground. Such a breathtaking view that I can say would be my trophy for coming all the way here.

As our boat chugged around the islands, we approached a solitary islet which has empty picnic huts and lush green trees. Coconut trees became more distinct as we approached the isle. Corals, sea weeds and sea urchins dotted the shallow sea bed.

We got off the boat and proceeded to the picnic huts as we put down our stuffs to ready for a saunter at the beach. We were really gearing for a swim but there were just so many seaweeds and corals which are not ideal for swimming. It was a bit weird to stroll along the shores because the soft brown sand has a marshy texture that made our feet stick to the ground whenever we step on it.

With the sun shining hot on a high noon, we got back to the huts and enjoyed the wind, the calmness of the surroundings until some of us drifted off to sleep. This relaxing moment is something we couldn’t enjoy in the fast-paced life in the urban cities. What’s more, the rustic lifestyle in these non-commercialized islands made us feel closer to nature.

But it wasn’t a wasted afternoon because we just had a sumptuous simple meal which included fresh mangoes, grilled fish, sea foods and chicken. We had several fresh coconuts afterwards. It was very private there and we had the islet all to ourselves. Life there was simple, very laidback and relaxing without the usual luxuries that most island resorts offer.

Sto. Domingo is a town in Albay named after its patron Saint Dominic of Guzman. This scenic town is known for its black sand beaches and the grandeur of the view of the Albay Gulf. Although Sto. Domingo is only a small town, it is a place that has been wonderfully planned. The Cathedral sits at the heart of the town and surrounding it are the public market, the public plaza and the school.

Everything seems to be a walking distance and we didn’t mind the stroll because the narrow alleys are well paved and the air is just so refreshing. We stayed at Puerto Vista Suites that has complete amenities like air conditioned rooms, a hot shower, restaurant, billiards table and even picnic huts at the rooftop. In front of the resort is the port which made it convenient for us to take the boat early in the morning for the island hopping.

While in Sto. Domingo, we grabbed the opportunity to get a massage from a local reflexologist. The activity was ideal with the unhurried and leisurely life people enjoy there. In Sto. Domingo, time seems to be running slow but the local folks’ smiles and laughter are evident that they are getting the best out of life.

If you happen to plan a trip to Camarines Sur, go to its neighboring province, Albay. It will be worth your while catching Mt. Mayon in its grandeur.

The view from the Phivolcs area.

10 thoughts on “First-time in Albay, Philippines”