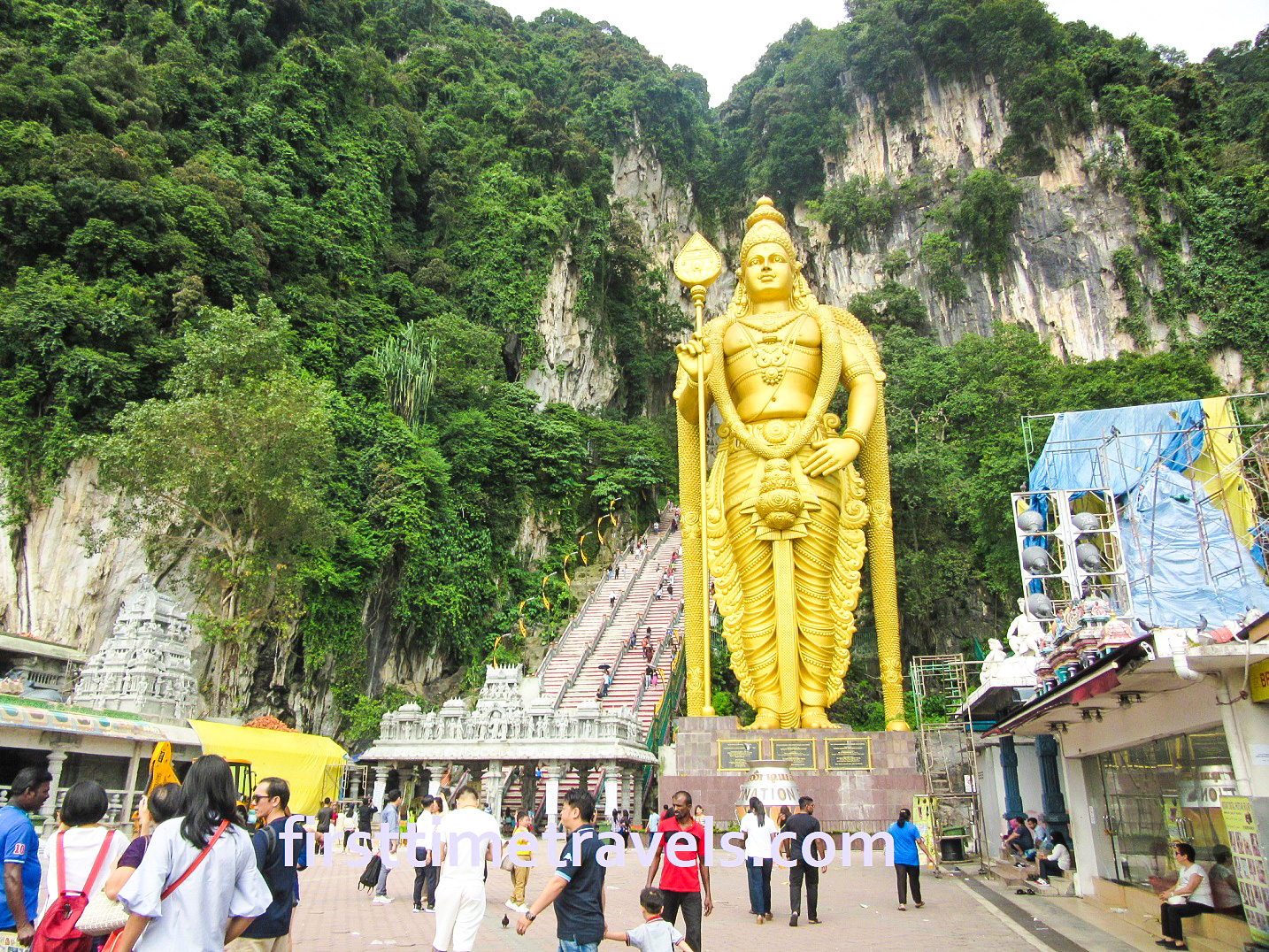 In my last trips to Kuala Lumpur, Malaysia, I spent more time in the central area. I never got the opportunity to visit Batu Caves, which is just very accessible from KL Sentral. It’s a distinct landmark with the huge golden statue of the Hindu god, Lord Murugan, and the long steps towards the cave in a limestone hill.

How to get there

The best way to get there is by KTM Komuter train from KL Sentral, taking the Rajah Laluan Route. We took this option and it was very convenient and comfortable. The train comes every 15 minutes during peak season and every 20-30 minutes during off-peak. The ride takes about 20-30 minutes. Ticket fare is about RM2.00.

Another option is to take the Intrakota Bus 11D from the Central Market. Another is the Cityliner bus 69 at Jalan Pudu. A more expensive choice is to take a cab going there.

The entrance from the KTM Komuter train station.

One of the shrines in the complex.

As we arrived at the KTM Komuter train station at Batu Caves, the limestone hills appeared at the horizon. Cars in the parking lot were also visible from the station. Vendors selling drinks, food, and souvenir items were lined up near the entrance. There is no fee required to enter the complex or the main cave. Other attractions have a very minimal fee charge.

A pond near the main cave.

Some people were gathered near the Hanuman statue or the monkey god. Monkeys were going around the area and spectators were taking photos of them. We walked, passing a shrine atop a few steps. More stalls and the entrance to the Cave Villa were spotted along the way. Then we came by a small pond with the wall of the cliff behind it.

The giant statue of Lord Murugan.

The long climb to the cave.

Then we came upon a clearing surrounded by eateries and filled by pigeons. The 140-foot tall statue of Lord Murugan stood tall at the foot of the steep 272 steps to the mouth of the Cathedral Cave or Temple Cave. Looking at the steps from the bottom seemed like an ordeal. Despite not being physically fit to do the climb, we did so as to satisfy our curiosity of what’s inside the cave.

Lord Murugan’s statue overlooking the rest of the complex.

The entrance to the Dark Cave.

But we were a few steps into our climb and monkeys were blocking us. It so happened that we were carrying our leftover lunch and they have sniffed the food. Smart monkeys. And greedy, too. One snatched a bottle of water from a tourist, opened it and gulped it all. Afraid that they might accost us, we left our lunch at the side of the steps. But not before we verified with the staff if we could do so.

We finally arrived in the cave.

Some of the attractions inside the cave.

I also came upon this scene inside the cave.

A souvenir shop at the mouth of the cave.

Our ascent was slow as we had to stop at every fifth step. We have read signages at the bottom of the steps that volunteers are encouraged to carry a brick. Imagine if we did that. We could have reached the top of the steps a bit later. As we got to the cave, souvenir shops are found at its mouth. Construction inside the cave was ongoing, like a renovation of a shrine. There were waters on the cave floor. Sand, bricks and some residue of newly mixed cement were in various areas. I looked around and found some icons on the wall and some portions of the cave.

As we descended the steps, it was scorching hot outside the cave. Parched and hungry, we entered Dhivya’s Café, just near the square at the bottom of the steps. I got myself an ice kacang to soothe my thirst and refresh myself. We went back to the train station and bid the monkeys adieu.