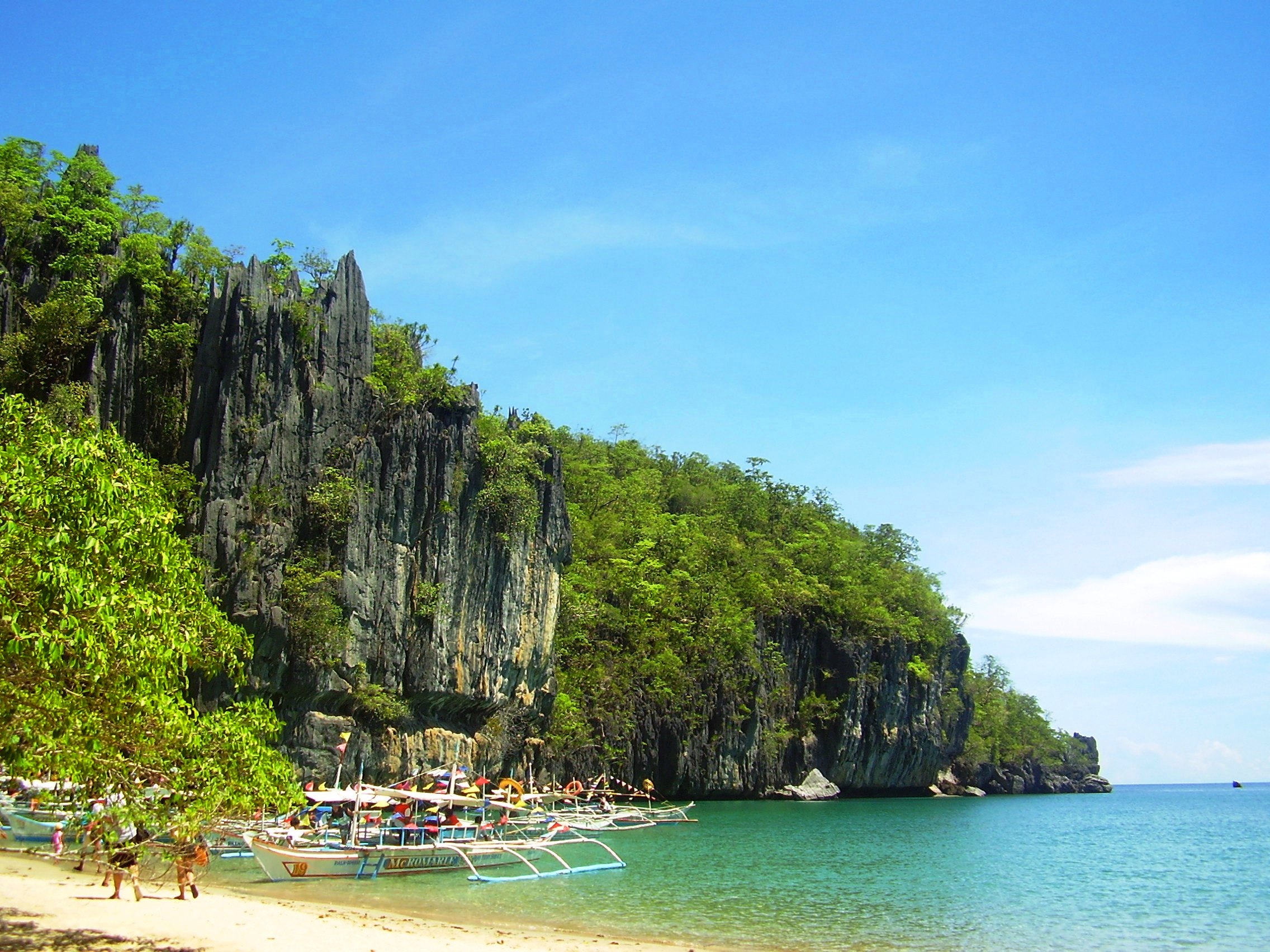 I have always been interested with Palawan. Since my childhood days, I’ve been hearing beautiful stories of the paradise on this side of the Philippines. When the opportunity came for me to visit their provincial capital, Puerto Princesa, I jumped at it and found myself hungering for more of Palawan. If Palawan is a movie, its capital is only a teaser and only entices you to look for better spots in this region.


Puerto Princesa (Spanish name, literally meaning Princess Port) is the capital of Palawan, the long, thin island in the west of the Philippines. Palawan is known for its diving spots and nearby exclusive island resorts that have been famous private getaways of international Hollywood stars and royalties. Although Puerto Princesa is more of a commercial hub than a tourist destination it also has attractions that can get your traveling blood rising.

There’s Honda Bay which will take your breath away. But Puerto Princesa, as a city, is a small bustling city without the tall buildings. It has many wildlife sanctuaries like the crocodile farm, butterfly farm and the small ostrich home at the Bakers Hill. Something that should not be missed is the Iwahig penal colony, the prison without bars, where you can see the entire Puerto Princesa at the view deck.

Puerto Princesa is the second largest city in the Philippines after Davao. But like the latter, the former is mostly composed of agricultural area and less of the commercial and industrial area. Puerto Princesa may not have a large mall but it has the NCCC (New Commercial City Center) Mall which sells all kinds of goods.

One thing I’ve observed about Puerto Princesa is that it has garbage bins all over, from the airport to small streets to major highways. No wonder it was awarded the cleanest city in the country in 1994. Kudos to its efficient local government for launching its Oplan Linis (literally means “Clean Campaign”) in 1992 which involved other agencies, non-government organizations, the private sectors and individuals in the campaign.

It’s always an advantage when you travel in groups because you save a lot in transportation and entrance fees. For one, boat rental at Honda Bay may vary from P1,000 to 2,000. It would be cheaper if you are 10-15 because every individual will have to pay a very minimal amount. Same is the case at the Underground River where every boat can accommodate 6-8 persons. Since it is more convenient to travel to the Underground River by van, having a bigger group is really beneficial.

Bring your snorkeling gear and sunblock lotion. Have comfortable clothes and slippers when traveling. When choosing for lodging, check the tourism office, make calls or surf the net and compare the packages. Better yet if you know someone who has contacts in resorts or inns.

Three days may not be enough to spend in Puerto Princesa. In Honda Bay alone, you can spend a day or two snorkeling and enjoying the beach. Add another day for the underground river. Then a few more days you need for Puerto Princesa and its nearby attractions.

Best Way to Go Around:

The best way is to hire a van so you can go anywhere you please. Travel agencies offer P500 (over US$10) per person for a city tour. Van rental may range from P1,000 to P2,500 depending on your destination and length of time for the rental.

If you are staying within the city proper, you can take a tricycle or jeepney. Most attractions are outside the city proper so it’s better to rent a vehicle that you can use wherever and how long you want to. However, the multi-cabs, the local version of jeepneys, only cost P16 or P20 (US$ 0.50 or less) per person from one point of the city to another.

The Butterfly Garden of Palawan is just a small area that has a wonderful garden inside a walk-in cage where butterflies are free to roam and fly around. It is inconspicuous as you’ll never know it’s there unless you read the signage carefully.

The butterfly garden was constructed mainly to educate visitors through a video on how butterflies develop and survive in a particular environment as well as an exhibit of the pupae. Another objective is to attract tourists and make them aware of the beautiful butterflies that are natural to Puerto Princesa.

The garden is full of flower-bearing plants where butterflies fly around hopping from one branch to another. You can find various pupae and cocoons where caterpillars transform into butterflies.

Entrance fee is very cheap at just P20 (US$0.50 or less) per person. There are only a few species of butterflies in the garden but they come in large numbers. Near the exit is a small shop that sells various souvenir items and house decors.

Honda Bay is home to various small islands at the mouth of Puerto Princesa. It has Luli Island (short for “lulubog-lilitaw” or float and appear because the island appears to have sunk during high tide), Starfish Island, Snake Island, and so much more. That is the reason why island hopping is the best activity for tourists whenever in Honda Bay.

Honda bay can be reached through private vehicle or by hiring a tricycle or jeepney towards the Sta. Lourdes wharf which is about 25 minutes or 12 kilometers from the center of the city. It is in the boundaries of Sta. Lourdes Tagbanua. From the wharf, visitors can hire a pump boat to take them to any point or island in Honda Bay. However, a number of the islands are privately owned, which means one has to inform or obtain the permission of the island owners. But other islands are open to public which generally have a minimal fee.

Somewhere along the large expanse of Honda Bay is a floating hut that guards a rich marine sanctuary filled with colorful corals and a variety of fish species. When you go snorkelling in the designated areas, you’ll find a magnificent world undersea. The main attraction is the Pambato Reef.

From island hopping, swimming and snorkeling, one can shower off at the wharf where a visitor center is established. Again, a minimal fee is charged for the use of the shower and comfort rooms. But if you can take it, you can dry off and then have your shower at the resort where you’re staying.

Snake Island is a sandbar that is 3,000 meters long depending on the tide. Small fishes fill the shallow part of the sea while at the deeper part are large star fishes and colourful fish species. There’s not much corals though that you can see in Snake Island although there’s a cordoned area where you’ll see the seabed‘s steep slope.

We spent most of the time at Snake Island because it has several cottages where we can cook and have our meal. We had a sumptuous lunch at the island. Also, several boats dock here because this is a famous stopover for tourists and visitors. There’s a wide area for swimming and snorkeling.

Then at low tide, the sand bar stretches out where one can play at the sand or get a tan by sunbathing. There are also mangrove plants in the island that makes it a bit cooler than just having a plain sand bar.

With its colorful history and breathtaking natural beauty, the national park was declared as a World Heritage Site by the United Nations Environment, Scientific, and Cultural Organization or UNESCO.

Surrounding the underground river are rocky mountains made of marbles and limestone as well as lush tropical rain forest. The coastline is ideal for swimming and relaxation as evident by the number of resorts sprouting near the national park.

From the shoreline, tourists are greeted by animals, like monkeys and iguanas. No need to panic as they won’t hurt anyone as long as they are not rebuked. Just be careful with your food or they’ll come after you.

Honda Bay, Snake Island, and the Underground River are Puerto Princesa’s gems that shine under the sun. What more could be in store for me in Palawan?