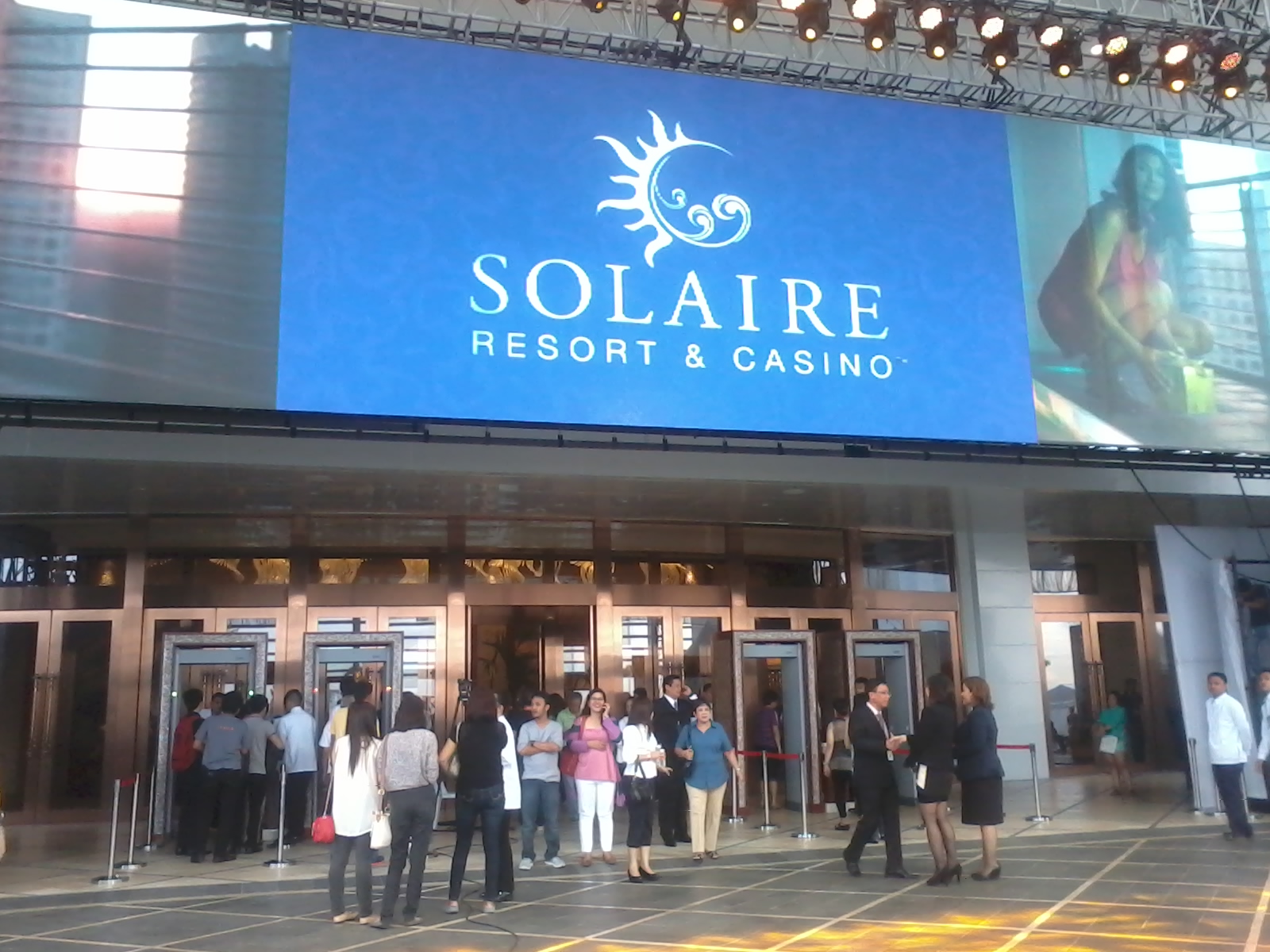 They are out to change the game. And I want to believe that they are a step into it. Solaire Resort opened its doors to the public today. Due to the hype, it was expected that a lot of people will troop to this casino resort.

Solaire Resort and Casino is Manila’s newest attraction as it brings the vibe of Las Vegas to the Philippines. Foreigners are expected to come here to enjoy Solaire’s amenities and luxurious rooms.

As we made our way to Aseana Avenue, where the so-called Entertainment City is developing, we could already see traffic building up. But the palm trees and the balloons gave an enthralling welcome to those wanting to get a glimpse of Manila’s new attraction.

Upon entering the main doors, glass chandeliers gave the interiors an edgy feel. Flowers were everywhere, which gave a touch of warmth to the casino. As much as I wanted to take more photos, I was gently asked to refrain from taking pictures by a lady guard. I willingly obliged, respecting the rules of the casino. After all, security is a high priority in this place.

Don’t you want to lay down on a bed of roses?

We went around the ground floor. Game tables and slot machines were aplenty. And with so many guests who are as curious as I am, the place was teeming with people. We had to check out the restaurants but there were those that admitted those with invitation only.

The paintings were all consistent, depicting a splash of vibrant colors. It reflected modern art, not just on the style of the painting, but also on the material used. The staff were all dressed elegantly. The lady ushers were mostly tall and attractive. Security men in suits roamed the area to make sure everything is under control.

With a hungry tummy, we headed to the Eclipse Lounge. We also checked out Fresh, its restaurant with buffet offerings. Dinner buffet, which starts at 5:30pm is at about PhP1,688. At the Eclipse Lounge, they only offer drinks although they serve some bar snacks like nuts and chips (and chicharon, too!).

We made our way to the front of the bar, where an empty table stood, and ordered some drinks. Lucky we were that the next singer was no less than the concert king of the Philippines, Mr Martin Nievera. He sang his classics and some Frank Sinatra songs. Martin is really an entertainer as he went close to the audience and sang for them. While he was doing his numbers, Solaire’s big boss, Enrique Razon, arrived at the lounge and mingled with the guests.

Martin went around the audience, serenading them with his awesome voice.

It was a full house, so we were not surprised to experience some delay in serving our orders and processing our payment. It’s their first day so it’s forgivable. But I do hope they can improve on this if they expect a full house every night.

The evening was getting late and we made our way to nearby SM Mall of Asia for a filling (and value-for-money) dinner. People were still hanging out at Solaire and most of them seem to be up until the wee hours of the morning for a beginner’s luck. A 3D mapping was being shown outside, projecting onto the carpark facade. But it was the pyromusical competition at SM MOA that capped my night with a bang.

Fireworks display at nearby SM Mall of Asia.