First-time in the Ruins, Talisay 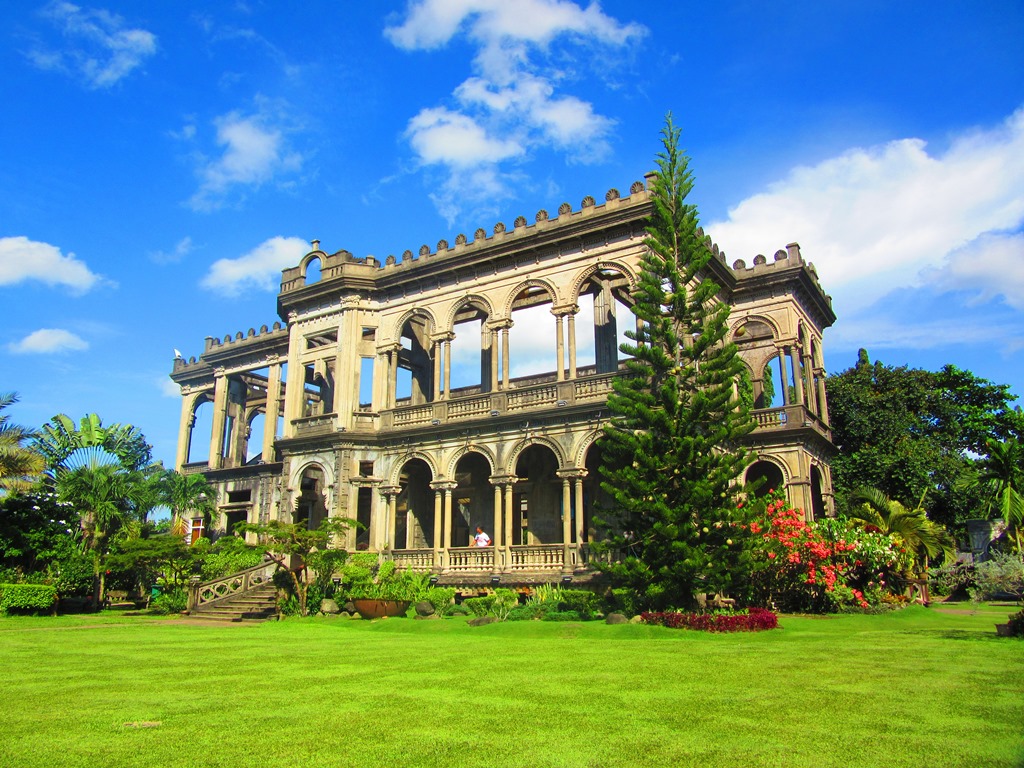 I went home last Christmas with a mission: to visit another tourist spot in my own province. It helps to know what’s going on in my own backyard, figuratively speaking, so that when I travel, I also get to talk about interesting things about my hometown.  Being away from home for 11 months in a year, I was bent to make every homecoming a memorable experience.

The Ruins of Talisay City.

I enlisted some friends who, like me, seldom go home to our province. There were four of us who wanted to see the Ruins, which has recently been popular to travelers, evident by the photos and write-ups found in blog pages and social network sites.

Roger, the tour guide, became famous because of his antics.

We met up at Bob’s restaurant across the Riverside hospital and hailed a taxi to take us to the Ruins.  The cab driver knew the place.  He took us through the main highway, Lacson St., then we turned right at the Pepsi Office towards Bata. We passed a memorial park and a subdivision. Although the driver obviously knew his way, there were directional signs that aid any tourist going to the area.

Finally, we reached the Ruins. We paid P40.00 (less than US$1) each at the entrance. The sight was breathtaking.

The fountain in front of the Ruins.

The afternoon sun provided the perfect lighting for the picturesque view of the Ruins. The fountain near the entrance enhanced the scenic grounds of the old mansion.  Many tourists were about.  A lot were locals bringing their family members and guests to see the place.  A wedding ceremony was also ongoing.  So, despite the visitors that seem to be crowding the place, there was still an air of romance at the site.

The Ruins glow in the darkened night.

The Ruins reminded me of Macau’s Sao Paulo’s Cathedral. Although only the columns and what seem to be a skeleton of the mansion left, it was still very beautiful.  This old mansion was erected by a Lacson patriarch who married a Portuguese. I have read brochures and historical articles about the place but let me tell you the story based on how I understood it.

It’s a beautiful scenery at night.

One of my dearest friends is a Lacson and is related to the family that built this house of Italian architecture. Materials used for this house were formidable that it withstood the fire that ravaged it during the Second World War. The fire was intended so as to keep the Japanese from using the house as headquarters.

The Ruins is reminiscent of old rich families from the province of Negros Occidental, which is more known as the sugar bowl of the Philippines.  This part of the country still has the hacienda system with landowners living in large Spanish-inspired houses.  The mansion truly has a European feel as evident from the intricate designs on its arches and balustrades to the imposing structure. Swathed in orange and yellow hues from the setting sun in contrast to the bright green of the grass and plants, it created a painting of history, serenity and regalia.

The Ruins is all aglow.

*Update: I have returned several times to the Ruins and the photos here were taken in 2014.

3 thoughts on “First-time in the Ruins, Talisay”

← Highlight of 2009: My first-time travels ← First-time in Kaitulari Resort, Philippines