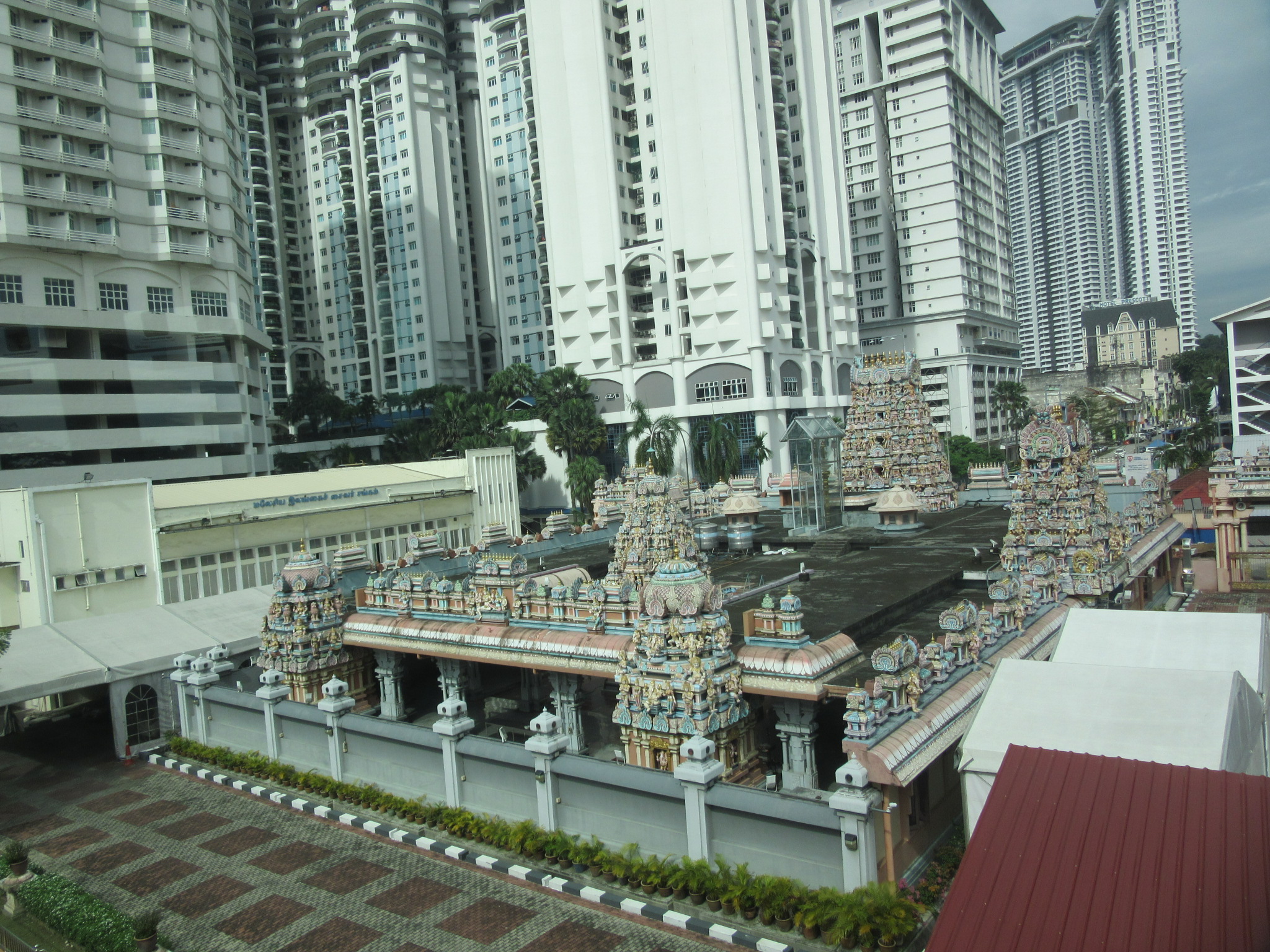 It was Holy Thursday and families in the Philippines were trooping to the churches to witness the reenactment of Jesus washing his disciples’ feet. Since I was a kid, it has been our tradition to visit Catholic churches at this time of the year. We call it Visita Iglesia.

This year, as I was in Kuala Lumpur, my friend and I decided to try a different tact. We opted to visit churches of various religions. After all, we all live in the same world and it is good to see how we all practice our respective beliefs and culture.

From our hotel at the airport, we took the transit train straight to KL. When we got to the KL Central station, we took the transit to Pasar Seni and started with our walk. We passed Jalan Tun H. S. Lee and went down to Jalan Panggong with a map on hand as we were looking for the Sri Mahariamman Temple. But it seemed to be placed wrongly on the map. We ended up at the Chan See Shue Yuen Clan House.

We were looking for a Hindu temple but couldn’t find it. We tried to look for a Chinese temple instead.  As we approached the end of Petaling street, the rain suddenly poured down. Luckily, a Chinese temple was nearby and we entered it, not only to take shelter from the rain but to also make our first religious visit.

We entered the temple and paid our respects to their revered altar. There was a small courtyard at the center. Not wanting to disturb the people inside, we stayed by the door, where a Spanish man was seated. We asked him information about the temple but wasn’t able to give us any. He was there to take shelter from the rain as well.

There were some young students waiting by the door and we turned to them to ask about the place but they could neither give us much detail.

It turns out that we entered a clan house by the Yuen family, and is considered as the largest and one of the oldest surviving clan houses in KL. It was a refuge for Chinese migrants who arrive in the city. Now, it has become a temple as well, called the “Green Temple” because of its green roof.

Looking around the place, there was an intricate carving hanging on the ceiling by the door that has images of dragons and people. There was also an unusual looking cat hanging around the area. We didn’t want to make a noise because it was very quiet inside, despite the outpouring outside. It seemed that the Buddhists are very quiet when it comes to prayer. Only smoke from the incense and from a pipe filled the air.

When the rain died down a bit, we ran towards Jalan Stadium Kuan Yin temple but it was closed at that time. A crowd was braving the rain at that time all going to one direction. To our surprise, they were going to watch a Justin Bieber concert at the Stadium Merdeka, just down the road. Fans, young and old, excitedly walked drench just to see their idol. That’s a different kind of worship.

Finally, we found our way to the Sri Mahariamman Temple. It is considered the oldest Hindu temple in KL. The façade glowed with the many colorful and artistic carvings of Hindu images. From the dark street outside, we could see the main shrine within the temple. Worshipers, dressed in traditional Hindu garb, were offering flowers and prayers. A number of tourists entered the temple.

We would have entered the shrine but we had to leave our shoes outside. With the rain, the pavement was wet and we had to visit several other places of worship along the way. But instead of hopping into a cab to visit the Cathedral of St. Mary the Virgin, we opted to walk a block to Chinatown.

Nope, this is not a place of worship but this is definitely a shoppers’ mecca in KL. Like any night market in a metropolis, Petaling Street was swarming with people. My friend was looking for a wallet so we checked a row of stalls.

Naturally, vendors offered us cheap items they were selling. Shirts, bags, souvenir items, magnets, snow globes…name it and you’ll find it here. They were even selling small tools. I looked up to see red Chinese lanterns hanging about the stalls. I was trying to find the end of the small alley but it seemed endless. After so much walking, we decided to make a U-turn and hail a cab towards our next destination.

Cathedral of St. Mary the Virgin

I have passed by the Cathedral in my first visit to KL but I haven’t been able to enter its sanctuary. That time, there was a service going on, so we entered the church. The priest, standing on a mounted sermon box, like the old churches at home was giving his homily.

Images of saints and religious icons were covered with purple cloth, just like how it was back home. But it seemed weird. It felt familiar, yet different.

After giving our short prayers, we stepped out of the church. As we were reading the bulletin and the description of the building, which was erected in the 19th century, we found out that it was an Anglican church.

Just across the Cathedral was the Merdeka Square, with the Sultan Abdul Samad Building, lit by colorful lights. The structure, with its beautiful architecture, glowed magnificently as the colors changed every other second.

I was feeling great bringing my friend around KL as if I know every nook and cranny of the city. Apart from the map and brochures, we were walking around the streets and alley based on memory. It was also helpful that I know a sentence or two of the local language.

The night ended with us going back to the KL Central Station on our way back to our hotel near the airport. Again, it was a long ride, but with the express train, we were able to visit different worship places. The rain wasn’t a deterrent either. It was a weird and new experience seeing the different architecture, images, and prayer rituals of different religions.

← Travelers and their “Firsts” ← First time in Casablanca