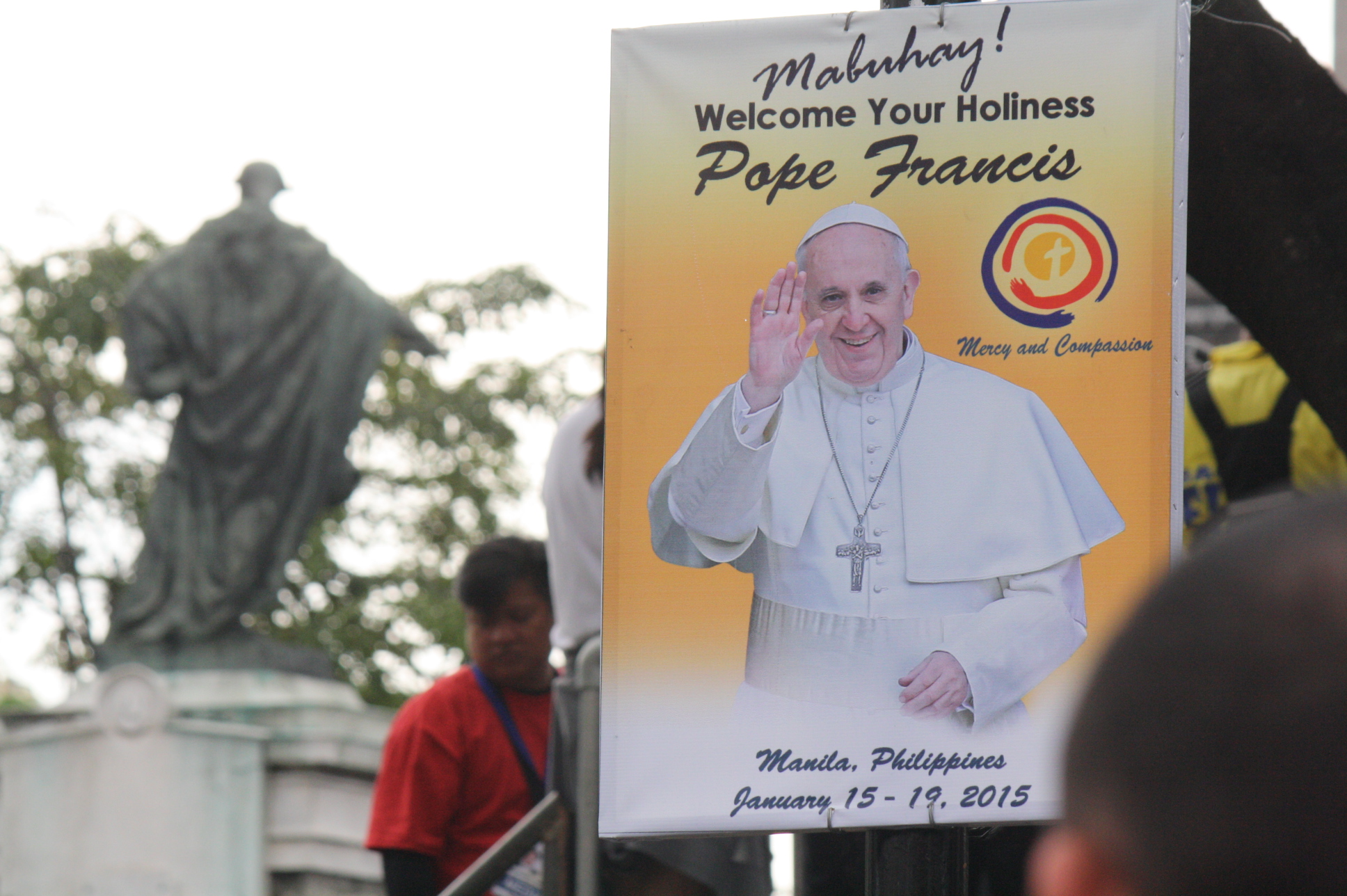 The first month of the year 2015 is a great kick-off for the Visit the Philippines Year. January is full of festivities, and religious celebrations, at that. Throngs of people were expected to gather in Manila for the Black Nazarene,  in Cebu and Kabankalan for the Sinulog, in Iloilo for the Dinagyang, and in Aklan for the Ati-Atihan. But the most-watched event was the State and Pastoral Visit of Pope Francis, the head of the Catholic Church.

When his visit was announced publicly, I thought that I had to be there. Having settled back in my home city of Bacolod, booking a flight and accommodation is a big consideration. Nonetheless, my sister and I were compelled to go to the capital for this rare opportunity to see the Pope.

Catching a glimpse of the Pope.

It’s not just about a mere “catching a glimpse” of Pope Francis. It is more than that. But let me not delve into my faith as that will require a different blog entirely.

And so, my sister and I prepared for this special religious journey.

I have to backtrack 20 years into the past. There I was, a freshman in college, enjoying my university life in the capital, and very eager to try so many things. As preparations for the World Youth Day in 1995 was underway, I enlisted in an Opus Dei study center as a media volunteer as this was more aligned with my interest as a Broadcast Communication student then.

Never have I realized that my Media Volunteer ID would give me a pass inside cordoned-off areas, getting near Pope John Paul II, now Saint John Paul II, and an opportunity to be one of the ushers in the Catholic Mass Media Awards (CMMA). We were assigned at the Philippine International Convention Center (PICC) where the media action was electrifying. On the streets, we would interview foreign delegates and submit daily articles for the organizers’ event newsletter.

I couldn’t count the times I have seen Pope John Paul II and in most of those encounters, I was a few feet away, sometimes, almost an arms length. When he arrived in PICC for the CMMA, we were at that special entrance door where he would be entering. In Luneta, where millions attended, we stayed at the media box, a steel scaffolding of about two-storey high. We had a good view of the Quirino Grandstand and the crowd but being up there was also scary.

The theme song “Tell the World of His Love” made a great dent in my memory and in my heart. And though I cherished all the moments of my WYD’95 experience, it was unfortunate that my camera film (digital cameras where not yet a thing then) got destroyed and everything just went black.

This time, I have no Media Volunteer ID to get me close to the Pope, so we had to grab every opportunity we could to be where he was. Since we booked our flights before the official schedule was announced, we realized that we wouldn’t make it to the Sunday mass in the Quirino Grandstand as we had to be in the airport by then to catch our plane going back home.

We planned our itinerary. Early Friday morning, we made our way to the Manila Cathedral where the Pope would be saying mass to priests and the religious. I knew we would be staying outside the Cathedral and I was prepared to squeeze in the crowd. That was even a small crowd and quite manageable but, still, when you are right there in the middle of action, you just have to go with the flow. We had to change locations several times, until we found a better spot near a building. Quite far, but better.

Watching the mass at the giant screen outside the Manila Cathedral.

The mass itself was moving and we didn’t mind seeing Pope Francis from afar when he walked from the Cathedral and crossed the street to the Tulay ng Kabataan Center that housed street children. When the crowd dissipated, we walked towards the Mall of Asia (MOA) direction. I thought that walking the whole stretch of Roxas Boulevard would not be that hard. But after walking only a block, our legs were already aching and we decided to take a pedicab.

We asked the driver to take us to the nearest area where we could grab a jeep or a cab but he brought us at the corner of Quirino and Taft Avenues and charged a hefty amount. We bargained and he was left without a choice but accept our payment. Though we never planned to be in this area, we decided to wait there as it was near the Apostolic Nunciature. We found a great spot and when he passed by, we had a good view of him.

As the crowd broke, we knew we had to be walking again and we decided to pursue our plan to go to the MOA. We were able to get a jeepney but we had to go down a long way from MOA since most of the roads were closed. From Libertad, we crossed Roxas Boulevard and walked towards Macapagal Avenue. Tired, exhausted and famished, we decided to instead have dinner at the Project Pie in the Blue Bay Walk. We were resigned to the idea that after eating, we would just head home and get some rest.

We got a closer and clearer view of the Pope when he passed us by near Mall of Asia.

Alas, as we were finishing the last of our pizza, the crowd cheered outside. I went out towards the highway and a few seconds later, Pope Francis passed by, waving at us. It was an exhilarating feeling.

If you are going to a large religious celebration, whether it is a Christian gathering or otherwise, these are things that you should bear in mind:

1. Wear clothes that are appropriate to the occasion. If there will be prayers or rites, be sure that what you wear is not offensive to the local faithfuls attending the gathering. Also, wear shoes that are comfortable for walking or standing.

2. Pack light. You wouldn’t want to carry that heavy backpack while the crowd squeezes on you and you have to walk several blocks to get you to your destination and back, right?

3. Bring the essentials. You should have an ID there, in the first place. No large amounts of cash, especially if you are a foreigner attending a local religious celebration. Be mindful only of those that are allowed in the area. For this Papal Visit, for instance, umbrellas were not allowed.

4. Check the weather. If it will rain and it’s an open-air venue, know where you can take shelter. If it is a closed door affair, know the times to get there so you can avoid an impending rain.

5. Find a good vantage point. Being near sometimes is not strategic. Oftentimes, you have to take a few steps back, find a higher ground, and you’ll get a better view of the happenings.

6. Eat, drink, and go to the toilet beforehand. If you have to camp out hours or a day before, have a food available in your belongings. If going to the toilet before the celebration begins can’t be avoided, always try to look where the toilet is and situate yourself not too far from it.

7. Look up. If the crowd is too tight and you feel you can’t breathe, look up so your nose can breathe the air above you.

8. Be friendly. Fights often erupt when people push each other. Be nice to those around you. Sometimes, you’ll need their help. Besides, it is always good to spread positive vibes.

By Sunday, while everyone was camping out in Luneta, we attended a quiet morning mass at the historic Malate Church. Getting into the airport was such a challenge but we were thankful we got there early.

The messages — his words, his smiles and gestures, the whole scenario, the people enduring in the rains — they all burn in my heart after this experience. The joy, the blessing, and the sacrifice are indescribable. Witnessing the realities of human nature, the need to be in front and near the Pope, yet the ability to reach out and lend a hand to a complete stranger, they touched me in a humbling way. It was not all merriment, it even rained on the parade, literally. But the happiness of standing up and expressing my faith…

Now, words fail me. Delving into my faith do not require more words. I find comfort in the silence of my heart.