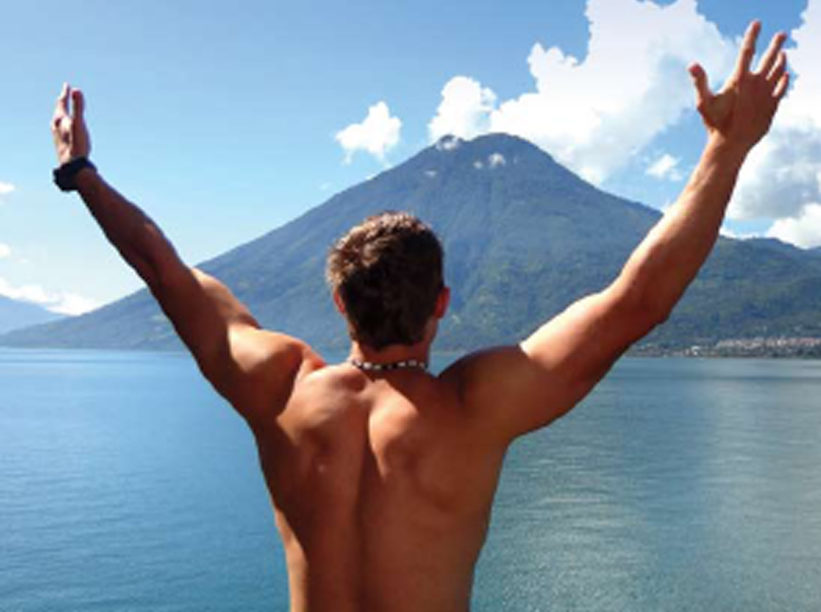 I get a lot of propositions in my First-time Travels e-mail every now and then. I read through them all and choose which best suits my interest and my blog’s theme. Recently, I received a message from a memoirist and traveler, Adam Shepard. He is one of those who are bold enough to leave the comforts of his routine life to chase after his dreams and explore the world out there.

He sent me his book, One Year Lived, for me to read and I got hooked. “Inspired” would even be a better word. If I could earn as much as the likes of my counterparts in the first-world countries, I would probably save my money, take a year off and go vagabonding around the world. For now, I contend myself with promotional air fares and accommodations that would take me beyond the borders of my country. Other times, I go with friends exploring what’s already in our backyard. With 7,107 islands, there is so much to enjoy about the Philippines. And one thing that got me interested in One Year Lived is his own experience about my country.

So, what’s One Year Lived all about?

From late 2011 to late 2012, spending just $19,420.68, less than it would have cost him to stay at home, Shepard visited seventeen countries on four continents and lived some amazing adventures. “It’s interesting to me,” he says, “that in Australia, New Zealand, South Africa, Europe, it’s normal for people to pack a bag, buy a plane ticket, and get ‘Out There.’ In the U.S., though, we live with this very stiff paradigm—graduate college, work, find a spouse, make babies, work some more, retire—which can be a great existence, but we leave little room to load up a backpack and dip into various cultures, to see places, to really develop our own identity.”

His journey began in “the other Antigua”—Antigua, Guatemala—where Shepard spent a month brushing up on his Spanish and traveling on the “chicken bus.” During his two months in Honduras, he served with an organization that helps improve the lives of poor children; in Nicaragua, he dug wells to install pumps for clean water and then stepped into the ring to face a savage bull; in Thailand, he rode an elephant and cut his hair into a mullet; in Australia, he hugged a koala, contemplated the present-day treatment of the Aborigines, and mustered cattle; in Poland, he visited Auschwitz; in Slovakia, he bungee jumped off a bridge; and in the Philippines, he went wake boarding among Boracay’s craggy inlets and then made love to Ivana on the second most beautiful beach in the world.

His yearlong journey, which took two years to save for, was a spirited blend of leisure, volunteerism, and enrichment. He read 71 books, including ten classics and one—slowly—in Spanish. “If you can lend a hand to someone, educate yourself about the world, and sandwich that around extraordinary moments that get your blood pumping, that’s a pretty full year,” Shepard writes.

One Year Lived is the compelling and transparent account of his experiences abroad. I like the way Shepard shared his adventures, as if I was there in every situation he narrated.

Hungry for more? One Year Lived is now available online and in bookstores.

Get a free e-copy by taking the steps below.

The good news is, you can get a FREE e-book copy of One Year Lived when you do the following:

1. Leave  below in the COMMENTS section of this post (that’s the box below) your answer to this question “If you have the resources and the time to take off for a year, where will you spend this and why?” Please limit your answer to 100 words or less. Include your Twitter name after your answer.

4. Once you’ve done all three above, I’ll e-mail you the e-book or give you details how you can download it.

Sounds easy? Grab a copy of One Year Lived now and be inspired by Shepard’s adventures.

Shepard’s trip comes just three years after he made national headlines for taking a year to test the viability of the American Dream. With just $25 in his pocket, he boarded a train and headed to Charleston, SC. He lived in a homeless shelter for 70 days and took odd jobs until finding a full-time job as a mover, eventually earning enough money to buy a pickup truck and a furnished apartment. After the resulting book, Scratch Beginnings, was released by HarperCollins in 2008, Shepard appeared on the Today Show, CNN, FOX News, 20/20, and NPR. He was also interviewed by Atlantic Monthly, the New York Post, Christian Science Monitor, and over 140 radio programs. For more about the book, visit his site www.OneYearLived.com.