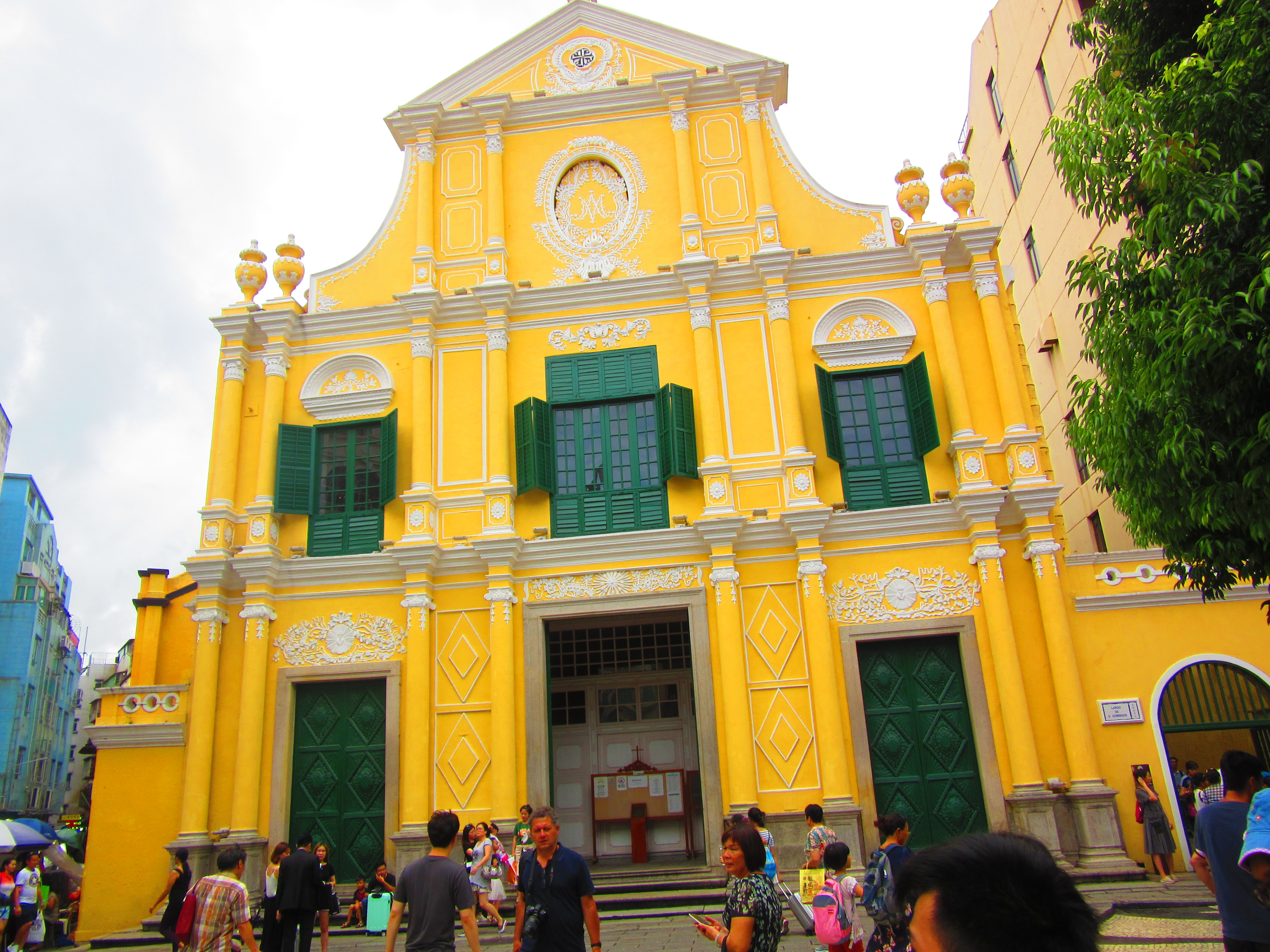 When one has a day job and has to take some time off to travel to some foreign destination, the journey is often scheduled near the weekends to make the most of it. That’s what I always do. Several times, I time my trips during the Holy Week when business in the Philippines are mostly on a standstill.

But traveling should not get in the way of my faith. The weekend is a special time for worship. Even though my travels make me even appreciate God’s creation, it is still different when I really make time for prayer. During my trips, my travel buddies and I always see to it to attend mass to a local church whenever it’s a Sunday (or Saturday night for the anticipated mass).

Interestingly, since the Philippines is a predominant Catholic country and there are millions of Filipinos all over the world, we would see large contingents of Filipinos abroad in Catholic churches. Even when I was assigned for work in Jakarta, Indonesia, I found that the Vatican Embassy was always filled with Filipino pilgrims who had been attending daily mass there.

These are the churches I have visited and heard mass. These might also help those who are looking for a Catholic Church when in a foreign land. Mass schedules may be found in their respective sites. Another reference is the Catholic Directory site.

My sister and I walked from our hotel to the length of Nathan Road to hear mass at the Rosary Church. It looked near when I was studying the map but when we were walking towards the church, it was a bit far. My legs were aching after a few blocks of traversing them. When we got to the Rosary Church in Tsim Sha Tsui, Kowloon, we found that it was still closed.

We checked the bulletin board and the next mass was not until an hour and a half later. Good thing that right across the church was the Hong Kong Museum of History. So, instead of waiting in front of the church, we explored the museum and got out in time for the mass.

Although the diplomatic relations of China and Vatican are yet to be restored and strengthened, Catholic Churches are still present in China. When I went to Guangzhou in the Guangdong Province, my friend and I attended a mass, in Cantonese, at the Cathedral of the Sacred Heart of Jesus. We took the subway to get to Yide Road, where the church was located.

It looked like a European Church and I found out that it was modelled after the Basilica of St. Clotilde in Paris, France. We went there a few days after New Year’s Day and there was still a nativity scene at the side of the church. The choir was composed by nuns and it was good that there were songbooks and mass guidebooks available at the pews, which helped us participate in the mass.

Cathedral of the Sacred Heart of Jesus
Also known as Shishi Cathedral or Stone Cathedral
56 Yide Road (or Yat Tak Road)
Near the Haizhu Square in the city center
Phone:+86 20 8333 6761
https://en.wikipedia.org/wiki/Sacred_Heart_Cathedral_(Guangzhou)

After visiting the World Expo in Shanghai and journeying to Xi’an and Beijing, we ended our mainland China trip by going back to Shanghai. The last leg of our trip was more easy and breezy that we devoted our Sunday attending church. Our travel companion’s friend based in Shanghai, Judd Reyes, who also acted as our guide as he toured us around the city, led us to St. Peter’s Church.

There was a bit of walking that we had to do to and from the train station. Interestingly, the church’s main hall where masses are held is located at the second floor. Though there were many locals who attended mass, there were several expats as well, some of them were friends and schoolmates of Judd as he introduced us to them.

On my first morning in Los Angeles, I had to roam downtown LA on my own as my friend, Cathy Muñoz, who was my host then, had to report to work at her office. She gave me a map of downtown LA and a few instructions to guide me on my solo exploration.

I walked a several blocks, chanced upon some homeless along the way, and got to the Cathedral of Our Lady of the Angels on foot. Along with two Australians, I joined a tour of the cathedral, including its Crypt Mausoleum, where personalities like Saint Vibiana, Gregory Peck , June Marlowe, to name a few. I returned a few days after to hear mass with my friend Cathy and she introduced me to the priest who officiated our mass, who turned out to be a fellow Filipino.

It was in 2003 when I heard mass in Bangkok and I couldn’t fully remember the name of the church. My colleague at that time and friend, Ariane Aliggayu, brought me to the church and introduced some fellow Filipinos who were also part of the Couples for Christ/Singles for Christ (CFC/SFC) group in Bangkok.

Based on the photos and its proximity in the Sukhumvit Area, I am bent on believing that we attended mass in the Holy Redeemer Church. The CFC office is also located across the church.

Since I stayed in Jakarta for seven months in 2002, I was able to go to several churches in the metropolis. I got acquainted with a Filipina, Kathy Quiaño, who was working with CNN’s Jakarta Bureau. I asked her where I can attend Catholic masses and she pointed me to the chapel at the 13th floor of Atma Jaya Catholic University, which was coincidentally just across our office building along Jl. Sudirman.

When I went there for the first time to attend Sunday mass , I heard during the announcement that there was a Catholic community that gathers every Friday at Gereja Santa Perawan Maria Ratu on Block Q. I went to the church and met fellow Filipinos who were members of the Genesis Catholic Community. I then frequented the church for the prayer meetings.

But as time went by, I realized that there was a Catholic church closer to where I was staying in Sunter. It was the St. Yohanes Bosco Parish. Not only that the church was run by the Salesian brothers but the Couples for Christ Catholic ministry were also active in this church. During first Sundays of the month, there were fellowships where parishioners eat together.

However, during my birthday, I celebrated it by hearing mass at the Jakarta Cathedral. It was a huge church and impressive. What was interesting was that the cathedral is right across the grand mosque in Jakarta.

During my last visit to Singapore, my high school classmate, Eisyl Labarro, her mom and I walked the city center to look for a church where we can attend mass. We passed a few churches but seemed there were no schedules right away. We kept walking until we got to the Cathedral of the Good Shepherd. It was an old church, based on its structure and building materials. As it turned out, it was the oldest church in Singapore.

Cathedral of the Good Shepherd, Singapore.

Finding a Catholic Church in Kuala Lumpur was a bit of a challenge. The one we found near Merdeka Square, the Cathedral of St. Mary the Virgin, was an Anglican Church. Our guide, a friend I met through the ASEAN Tourism group in Multiply, Pak Roger, drove us to a hilly portion of KL, towards St. John’s Cathedral. The KL Tower looms ahead at the backdrop.  The mass was finished so we just said a prayer and left afterwards.

From our hotel, we got a cab to the City Hall of Ho Chi Minh City. From there, we walked around until we got to the Basilica of Our Lady of The Immaculate Conception. But we never made it to the scheduled mass so we ended up taking photos instead and heading to the post office beside the church.

The Basilica of Our Lady of The Immaculate Conception  is often called as the Saigon Notre-Dame Basilica. It also looked like a European church, similar to the one I visited in Guangzhou, China.

We found the Myeondong Cathedral as we were roaming the shopping district of Seoul. It was accessible through the subway. At Myeondong, we climbed a flight of steps before we made it to the church. There, the Gothic structure rose before us. Filipinos and expats also filled the church during the mass. It was a solemn mass that we heard there.

Trying to make it to the scheduled mass, we took a cab from Ximending to St. Christopher’s Church and got there in just 10 minutes. If we would take the subway, we had to walk a few blocks from the station and we might not make it on time. The cab dropped us a few buildinds away from the church. Filipino groups were already converging near the church and we knew that we were in the area. The church was pretty small from the outside but as we entered it, it looked spacious. It was a touching felling to see my fellow Filipinos finding a sanctuary in this church.

31 thoughts on “Traveling and Worshiping”