Aboard the Seoul City Tour Bus 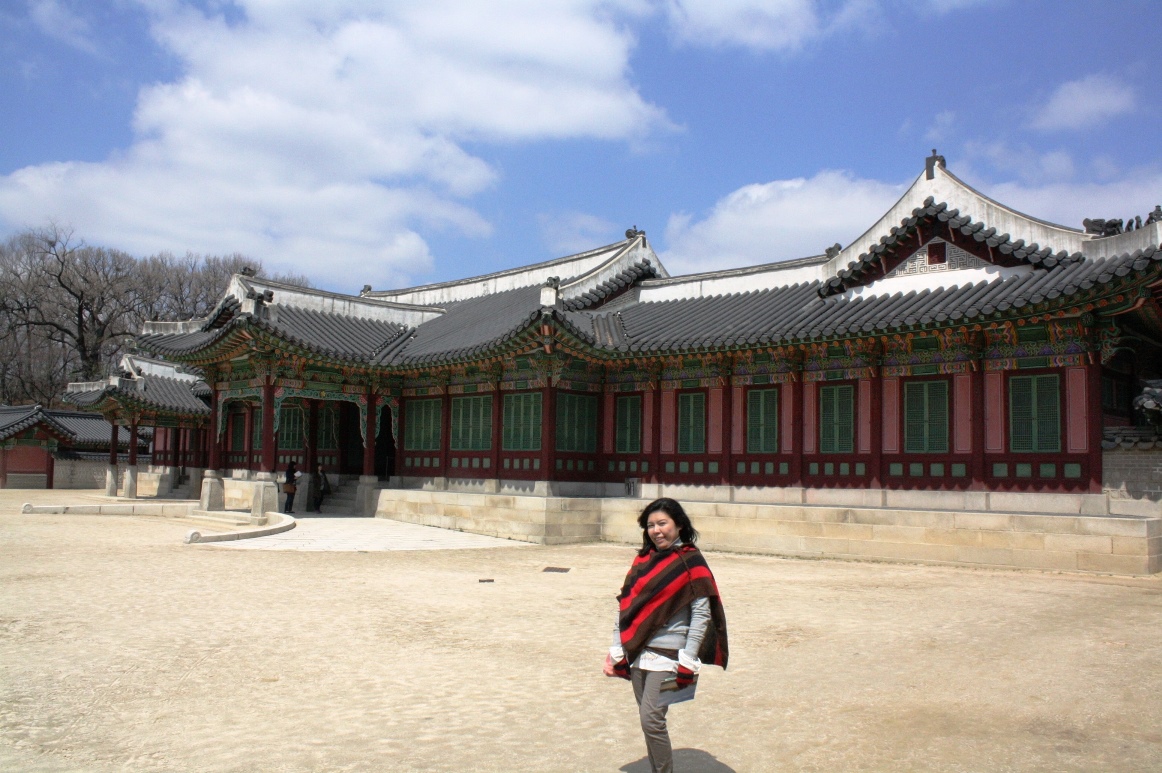 I first experienced a “hop-on, hop-off” tour in Singapore and found it very convenient and cost-efficient. It has an itinerary so you don’t have to worry how to navigate through unfamiliar city streets. But you can plan what to skip and where to linger most, depending on your interest.

Watch out for the Seoul City Tour Bus red posts where the bus stops.

As a first-timer in Seoul, the city tour bus was indeed helpful, especially on a rainy day. With 26 stops, it took us practically around the city at W10,000 (about US$10). We started our day at Gyeongbokgung Palace.

Most of the tourist materials I got list Gyeongbokgung Palace on the top of must-see places in Seoul. For only W3,000, we were able to tour the palace grounds. Tours in various languages were available at the information center but we decided to explore the palace on our own.

The palace’s main gate was guarded by traditionally clothed guards in colorful garments. Due to the rainy weather, the customary changing of the guards was cancelled that day we visited.

Gyeongbokgung Palace reminded me of Beijing’s Forbidden City. It wasn’t a surprise because Gyeongbokgung’s architectural design has a lot of Chinese influence. There was also the main hall where the royal family entertain guests. There were separate halls for the king’s offices and quarters, the queen’s, the crown prince’s, and the dowager queen’s respective quarters. The palace was restored after it was burned during the Japanese invasion. But the government has done a good job in bringing back the olden glory of Gyeongbokgung.

Gyeongbokgung on a sunny day.

My favorite spot in Gyeongbokgung is the Hyanwonjeong Pond. A garden was also located at the back of the palace grounds. For tourists, it is not difficult to go around because there are markers placed in important spots. A coffee shop is also located inside the compound.

We took the Seoul City Tour Bus at the eastern gate. But because it was the last stop, the bus brought us to Gwanghwamun where the first stop is located.

Gwanghwamun is the main gate of Gyeongbokgung Palace. Across the gate is a huge plaza with the larger-than-life statues of King Sejon the Great and Korean hero Admiral Yi Sun-Shin. Streams flow at the sides of Gwanghwamun Square.

King Jeson’s statue. Behind it is the entrance to a museum.

Underneath the square, at the base of King Sejon’s statue is an entryway leading to an underground museum featuring the inventions and discoveries of King Sejon, such as the sundial and the Korean alphabet, to name a few. The museum also showcases the naval prowess of Admiral Yi Sun-Shin. Admission is free.

From there, the bus proceeds to the Deoksugung Palace. A few blocks away is the Namdaemun Market. The bus stops right in front of Shinhan Bank and the underpass leading to the market.

Namdaemun’s main attraction is the Namdaemun Gate. But it is the Shopping Center that is the main attraction to tourists. You’ll find electronics here, clothes, bags, shoes, ingredients, and souvenir items.

Since it was lunchtime, we decided to try the food at Namdaemun Market. Through the tourism information volunteers, we were pointed to a food alley, a narrow street that has restaurants offering Korean food.

The Seoul City Tour Bus arrives every 30 minutes. We missed one of its schedules so we walked two blocks towards Seoul Station, the next stop, to catch the next bus. With rain continually pouring in, we stayed on the bus as it navigated towards the USO, the Yongsan Station, National Museum of Korea, The Korean War Memorial Hall, Army Base in Yeongsan, Itaewon, Crown Hotel, Myeondong, and Namsangol Korean Town.

The village featured a cluster of traditional Korean houses, or hanok, which belonged to elite families during ancient times. The compound is huge and an ideal place for walking exercises. A stream runs around the area that leads to a pond.

Traditional Korean folk houses. Behind is the N Seoul Tower.

The houses had complete household items, with jars and storage places for their local food, such as kimchi. Traditional Korean games are also available in the village grounds. From the house roofs, one can see the N Seoul Tower as a backdrop.

The House of Korea is located in the same stop but we weren’t able to visit it. We also skipped Sofitel Ambassador Hotel and the National Theater of Korea so we could spend more time at N Seoul Tower.

Located in Mt. Namsan, the N Seoul Tower is one of the modern landmarks of the city. It houses the observatory and the Teddy Bear Museum. There are entrance fees for each with a special package if you want to enter both. However, at that time, when Seoul has zero visibility because of the fog, we decided to hang out at the souvenir shops and the restaurants.

There is also a cable car going to and from N Seoul Tower. The other end is near the Pacific Hotel.

The Seoul City Tour Bus then proceeds to Hyatt Hotel, Shilla Hotel, Dongdaemun Market, Daehakro, Changgyeonggung Palace, and Changdeokgung Palace. Since the palaces were already closed at that time, we decide to visit Changdeokgung the day after.

It is one of the five main palaces in Seoul. Changdeokgung is considered to be the most beautiful, and a UNESCO heritage site at that. Similar to other palaces, Changdeokgung features a main hall and several offices and residences for the royal family and his staff within the palace compound.

A secret garden is found at the farther end of Changdeokgung, which requires another entrance fee, apart from the one paid at the main gate, and can only be entered when you avail of a tour.

Around Changdeokgung Palace is the Bukchon Hanok Village, a cluster of traditional Korean houses wherein built in the area are modern houses, cafes, and shops. Farther up one of the streets is a school building that is being used as a shooting location for Korean soap operas, like “Winter Sonata”.

The setting of “Winter Sonata”.

Almost at the end of the tour, the next stop is Insadong where Korean crafts and souvenirs are sold. The bus then goes towards Cheongwadae, the National Folk Museum of Korea, and the final stop, Gyeongbokgung Palace.

We also passed by the stream, one of the attractions in Seoul.

It was interesting to see Seoul in a day. But, of course, you can also avail of night tours, which have different itineraries. It is ideal to visit the markets for the night tours.

Check out also my posts First-time in Seoul and Spring in Seoul.

2 thoughts on “Aboard the Seoul City Tour Bus”

← First-time in Myeondong ← Spring in Seoul