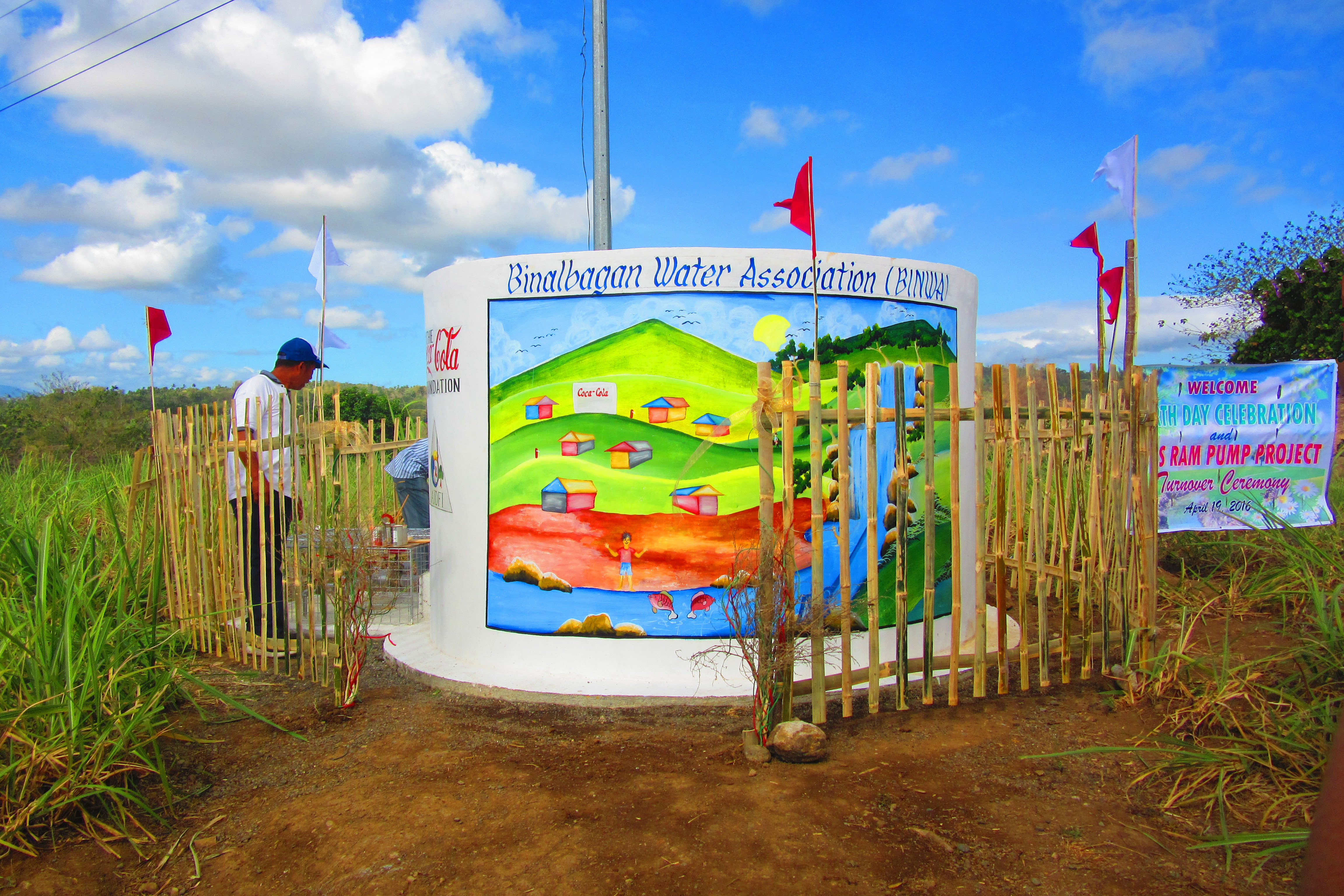 We started early in the morning coming from Bacolod City going through the Murcia-Bago road onward to La Castellana, Negros Occidental for the turnover of the Agos Ram Pump project of Coca-Cola Philippines, in partnership with the Alternative Indigenous Development Foundation, Inc. (AIDFI), in celebration of Earth Day 2016. With several vehicles on convoy, we got to La Carlota City in about an hour. From the highway, we turned left at the crossing that indicated the way to Kanlaon City.

The crossing to Kanlaon City.

Going through the zigzag road wherein some points seemed to be cliffs and ravines, we went towards Biak-na-Bato to Barangay Masulog in La Castellana. The majestic Mt. Kanlaon, which was reported to be spewing ashes a few weeks before we went here, was looming before us. Getting this close to nature was indeed a great way to kick-off my personal observation of Earth Day. And, this is probably the closest view I’ve had of Mt. Kanlaon (although I have been to Kanlaon City before).

We stopped at a certain point and went down our van and then boarded an open truck Canter. The Canter went through a rough road, braving a path with slopes on both side of the road, and arrived at a round concrete structure wherein the community was waiting for our party. It was the  reservoir that stores the water. And when we thought that was it, we were again asked to load the Canter and went further ahead to a more densely populated area. The small village is surrounded by mountains. I passed by a public faucet, which was obviously connected to the whole project that we were about to witness that day.

Riding on an open truck.

The road to Sitio Binalbagan.

Beneficiaries waiting at the reservoir area.

From the village, we hiked downhill, walked through a rice plantation, went downwards to cross a small stream that connects to a wide river, and climbed a steep hill where the ram pump was located. We did this while the sun was shining immensely at us, and I could feel its rays scorching my back. Imagine the villagers who had to walk this path, carrying 20 to 40 liters, or probably more, of water for their day-to-day use.

Going through the rice paddies.

Coming down from the Ram Pump area.

Project beneficiaries Victoriano Avila and Fructoso Casipong of the Binalbagan Water Association (BINWA) and the Can-urong Water Association (CANWATA), respectively, shared exactly that, on how it was difficult for them before the Agos Ram Pump Project was installed in their area that now benefits Sitio Binalbagan, Barangay Masulog and Sitio Can-urong, Barangay Puso. Fructoso even shared that often, their water containers would break and they had to walk again all the way to the river to fetch water.

Crossing boulders to get to the other side.

Coca-Cola Philippines President and General Manager Diego Granizo said during the event, “In support of the 100 percent water replenishment goal of The Coca-Cola Company, we started the Agos Ram Pump Project, which provides simple and sustainable water systems to water-poor communities in the country.”

The Agos Ram Pump Project is a modified version of a 200-year old technology that elevates water without the need for electricity. It harnesses the momentum of naturally-flowing water to propel itself into reservoirs, which in turn channels water to common tap stands near the clusters of houses. AIDFI Management Committee Head Auke Idzenga explained the whole process to the Coca-Cola executives, the community partners, and other guests.

Auke Idzenga explaining the process of the Ram Pump.

More than 140 households in the village benefit from the Agos Ram Pump, which supplies 25,920 liters of fresh water daily. Across the Philippines, a total of 20,018 households have benefited from the project since 2011. As of 2015, 1.319 billion liters of water have flowed through Agos Ram Pumps. There are 129 Agos project locations – 118 ram pumps and 11 rainwater catchment facilities and gravity installations – throughout the country, including the remote villages in my province, Negros Occidental.

We left the project site with the villagers thanking everyone who did their part in helping them have access to water. Project leaders remind them that they own this project and must work together as a community in taking care of the facility as this is a legacy they can hand over to their children and their children’s children.

16 thoughts on “Earth Day: Agos Ram Pump for the Countryside”