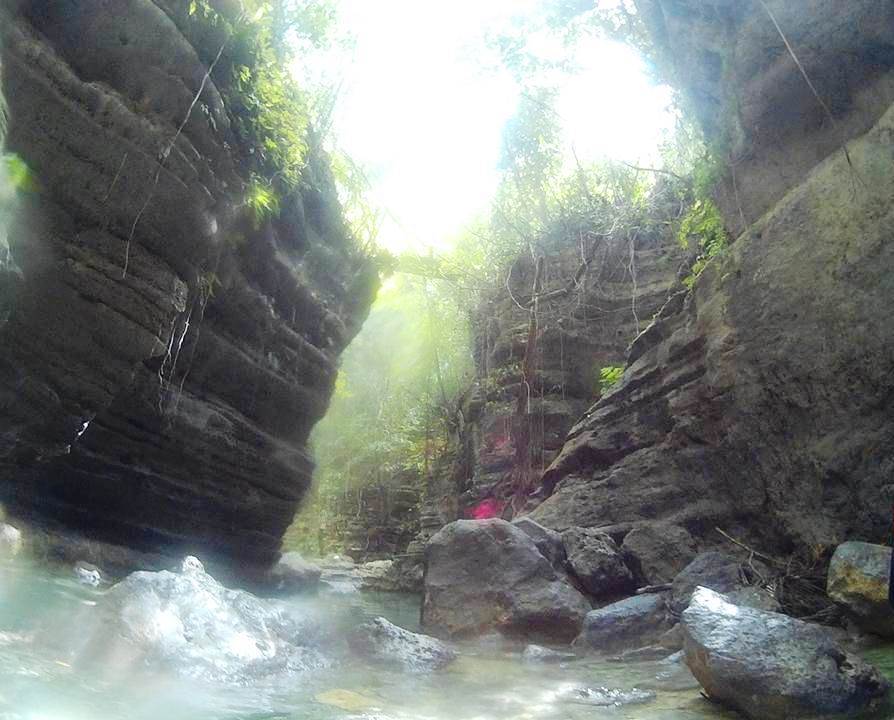 It all started with a discussion with fellow bloggers and online influencers about going to the southern part of Cebu, which is an island away from Negros, in the Philippines. Friends from the academe have been there recently and we wanted to go there, too. As we were asking those who have been there before us, they told us not to miss the canyoneering activity at the Kanlao-ob River and Kawasan Falls in Alegria and Badian, two neighboring towns in Cebu.

We planned this as an overnight thing, just a weekend getaway while it’s still summer in the Philippines.

From Bacolod, we took the Ceres bus bound for Cebu via Mabinay. Here’s something you need to know. Ceres is a major bus line that covers the entire Negros Island, Cebu, and other parts of the Philippines. But in Negros, they are somewhat your only bus option, if not for the private vans and shuttles that ply certain routes. But they really need to up their ante when it comes to customer service. They don’t have a site where schedules are updated and there was no information desk at the South Terminal in Bacolod. There’s no standard procedures as there are buses where you need to buy tickets before hand and there are those wherein they don’t issue tickets unless you’re already onboard.

Anyway, to get to Badian from Bacolod, you can either take Cebu or Dumaguete via Mabinay. If you are taking the latter, get off at the Lite Shipping port in Looc, Sibulan. But if you are taking the former, the bus will cross from Negros to Cebu by barge. Once you get to Cebu, take the bus from the port in Bato to Moalboal via Badian.

If you are from Manila, you can fly to Cebu or Dumaguete. From Cebu, it’s a three-hour trip to Moalboal. You can take the bus to Bato via Oslob and then change bus going onwards to Badian.

It is important that you have a guide for your canyoneering adventure. We opted for the Lucero Adventure as referred by our friends. Erwin Lucero, the father, is one of the pioneer guides for Canyoneering but he has passed this on to his son, Elthon John Lucero.

Gemma and his brother-in-law Erwin.

John (left) and Aljon (2nd from left) were our guides.

Plus, Erwin, his sister-in-law, Gemma, and John were extremely nice to us. Their family home is just along the highway in Barangay Malabago. After our canyoneering, they even cooked lunch for us.

The Lucero house, which is along the highway.

The billboard outside their house.

To get in touch with John Lucero of Lucero Adventure, the contact details are:

According to the Luceros, canyoneering in their area started around 1997, when some Europeans explored the areas and found a great trail for canyoning or canyoneering. Those who are more adept have taken the opposite route, going upstream, which is more challenging.

Eventually, word got around and as the activity is featured in TV shows, more adventurers find their way to this part of the Philippines. In fact, we have met a group of Russians, as well as some Japanese, Koreans, Americans and other nationalities who also braved Kanla-ob River.

Kanla-ob River is not for the faint of heart. Large boulders, as well as cave-like structures, dot the whole stretch of the river. Here are some tips on how to prepare for canyoneering:

Riding the motorbike to Alegria, Cebu.

We began our adventure at Alegria – about three to five kilometers from the Lucero house, on board a motorbike – where we had to register and be oriented on what’s going to happen. When we arrived at Kanla-ob River, the first thing we had to do was jump from 8 to 10 feet above water. This first jump is compulsory, so you have to muster all your courage to do this.

We registered and had our orientation at Alegria.

And so our adventure begins.

The trail was a mix of swim, hike, slide and jump. There are certain points wherein you can choose between jumping or going through tiny openings within rocks. Either way, they are thrilling and exciting. We traversed the ever-changing landscape of the river as the depth of the river’s water level varied every now and then.

The water is clear.

Happy to surpass the first jump.

Taking the tiny ridge by the river wall.

Can you take this jump?

There is a point along the way wherein we had to climb a huge rock and there were grilled food served there. It’s a resting point but quite far from the starting area. From the resting point, you can either jump the 60-foot high ravine or continue downwards with some small jumps and slides. There were also areas wherein you can find stalactites and stalagmites at the sides of the river.

We had to climb this rock.

Barbecue atop the rock.

The trees and the stalactites above us.

Going through a rock opening.

A cavity at the river wall.

Afterwards, we walked through a dry river as if the water suddenly disappeared, it was such a mystery. Our theory was that the water probably went through other channels, maybe below ground, because after some walk, we ended up at the third level of the Kawasan Falls. There were already many people swimming there, diving from the high spot, and swinging on the rope tied on a tree. There were some women doing laundry in one area, which I hope that the local government should regulate. In Calipay Springs in Siquijor, the laundry area was designated away from the swimming area, towards the end of the stream that opens up to the sea.

The third level of Kawasan Falls.

You can jump from the cliff or swing by the tree.

The second level of Kawasan Falls.

We again trekked downwards to the second level of Kawasan to the first level. Both areas were already crowded with tourists and locals who were enjoying a swim at the pool of water beneath the waterfalls. It was the finish line for our great adventure. The whole stretch of what we did covered about three kilometers and we did it for around 3.5 to 4 hours.

The first level of Kawasan Falls.

View of the first level from the ground.

I couldn’t believe that I was able to finish my canyoneering adventure. I have faced my fears and I have done it. It was an experience that I’ll always treasure and will share with my friends.

Photos courtesy of Darrell Deramos Java. Thank you also to our guides, John and Aljon, for taking some of our photos.