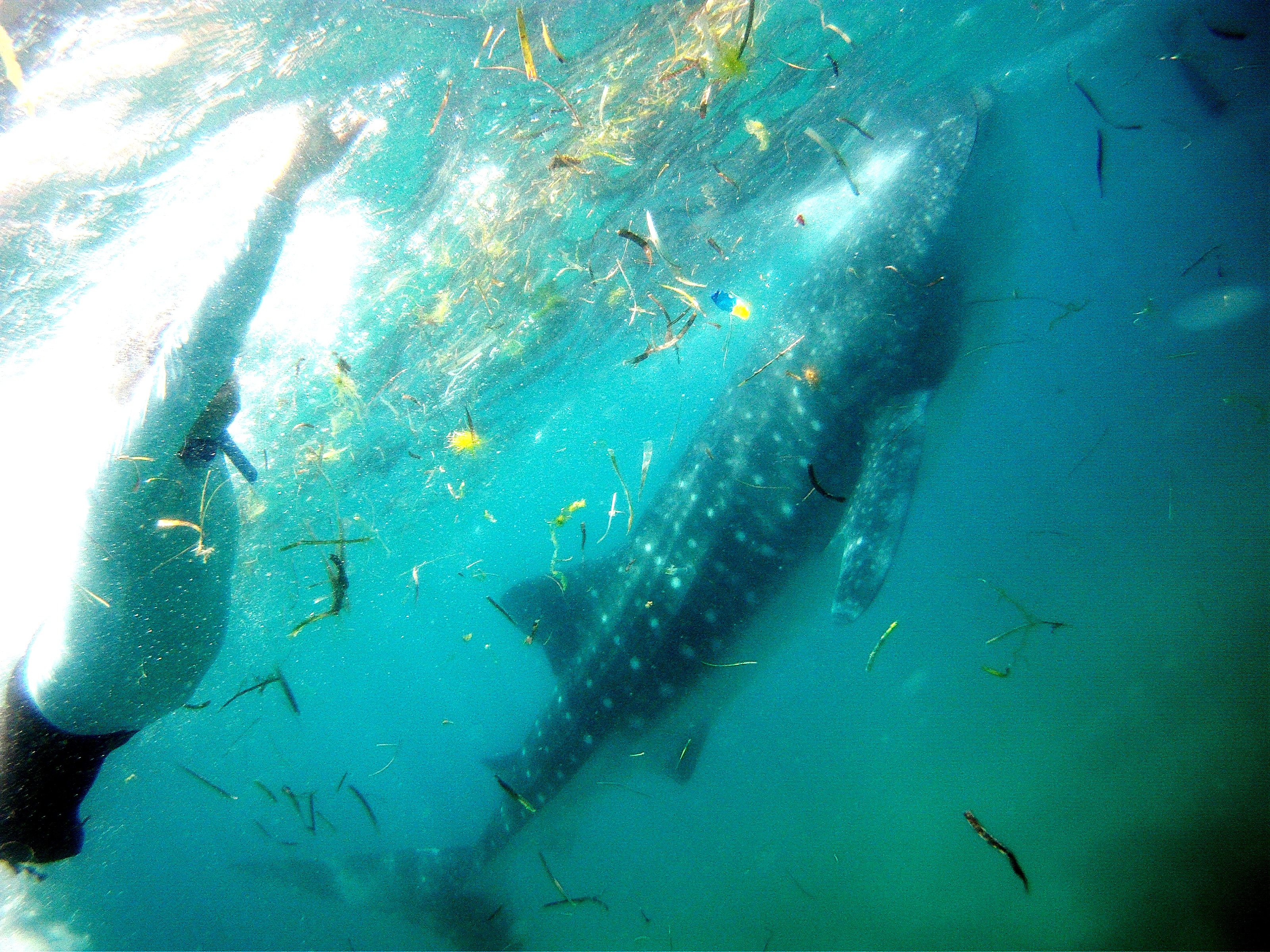 
I admit that I had hesitation about going there myself. However, I wanted to write about it, but all are based from what I hear or read. I have been to Donsol in 2005 (Read: First-time in Donsol, Sorsogon). The experience of seeing these gentle giants, called butanding, was so magical that my friends and I went back in 2012, seven years after (Read: Be Gentle with the Gentle Giants).

Still, there was that part of me that wanted to see the whale sharks in Oslob – to relive my awesome experience and, more importantly, to know the real story there and how they were treating the whale sharks. It’s hard to make a stand when you only base things from what others say about it.

We took the opportunity to go to Oslob as it’s only across the sea from Negros Island. As we are from the western part of the island (Negros Occidental), from Bacolod City, we had to take a bus to cross to the eastern part (Negros Oriental) where our bus bound for Cebu loaded a barge and crossed the strait to Cebu City.

Our travel time totaled to 8 hours: 6 hours by land from Bacolod City to Sibulan; 1 hour by sea on board the barge; and 1 hour from Bato, Cebu to Oslob.

Originally, we estimated our departure time at 11:00pm and our arrival time in Oslob at around 7:00am. Since it was only at the terminal where we found out that the bus to Cebu via Mabinay was scheduled at 2:00am, which meant we would arrive in Oslob at 10:00am, we were no longer too optimistic that we would still do the whale shark watching. It would be a major change in our itinerary if it happened.

Sumilon Island as seen from Oslob.

We went on with our travel and when we crossed to Cebu island, we informed the bus attendant to drop us where the whale shark watching is done. The bus stopped right in front of MB’s Sunrise View, so we immediately went inside to check if we still made it to the activity. We inquired and the manager informed us that we could still do the whale shark watching, which is only 30 minutes long, as it happens every morning until 12 noon. We opted to do snorkeling, which cost P500 (app. USD 10.87) for Filipinos. Rates are different for foreigners, which is higher, and for Oslob residents, which is cheaper. These rates may vary as time goes by.

MB’s Sunrise View is right along the highway.

There is some extra cost that we paid at MB’s Sunrise View but it granted us the use of their shower and they allotted us lockers where we kept our valuables. There were additional rates for the underwater camera, with the boatman as our photographer. The manager also assigned Chuchay, 14 years old, to be our coordinator, who accompanied us to the orientation area.

The orientation area was crowded with so many tourists, I was surprised myself. From there, we could see from the distance rows of boats lined up. They were the current batches that were doing the whale shark interaction. They seemed too near to the shore.

Getting ready to get on the boat.

We registered at the logbook and listened to a lady telling us the do’s and don’ts when it comes to whale shark interaction. Here are some of the rules and my observations on them:

The rules posted at the orientation area.

And the last thing I caught from the orientation is that violation could lead to 6 months to a year of imprisonment. I’m not sure if anyone has been caught going against the rules and if penalty has been implemented.

That day, we were group 275, and the organizers announced that they were already stopping the issuance of tickets since the activity is only until 12 noon each day.

Another poster at the orientation area.

But based from what I’ve heard before and from what I see, there seems to be a development because the first time this broke out around 2011, tourists were touching the shark and riding them. And from what I’ve read, more environmentalists and activists have been in dialogue with the local government, so certain restrictions are now being enforced. I hope that as time goes by, the whale sharks will be allowed to follow their natural patterns, just like how they are treated in Donsol.

There is a difference with the way humans interact with the whale sharks. If you have read my second blog on Donsol, the 6 tourists per shark rule is also somehow not followed. Here are what I have observed.

The whale shark goes around the perimeter following the feeding fisherman.

But, of course, for those who come all the way from other parts of the world wouldn’t want to go home empty-handed after spending a lot of money just to enjoy this kind of experience. So, it’s no wonder why many of them opt to go to Oslob than Donsol. And we can’t fault those who want to see the gentle giants. My only wish is that stricter rules and enforcement should be put in place to make sure that these travelers won’t hinder the natural habitat of the whale sharks.

Swimmers are advised to stay near the boat and not to touch the whale sharks.

What Should We Do

While I was chatting with Chuchay, I asked her how life was before this whale shark tourism in their locality exploded. She said that locals only thrived through fishing and copra making from coconuts. This latest attraction is a blessing for them. This coming school season, she will be in 9th grade, and she is doing this summer job to save some money for her studies. And though she will be studying, she said she will still spend her weekends working at the resort as additional income for her and her family.

Whether the whale shark interaction will continue or stop in the future, there is a need to strike a balance that can offer a win-win solution for the local community and the whale sharks. The locals find this as their source of livelihood that puts food on their table, sends their children to school, pays their bills, and provides for their other needs, but we have to care for these animals as they are part of our whole ecological system.

There is more reason to engage the local government and the communities and to further educate the public to ensure that the whale sharks are protected and cared for, allowing them to live in their natural habitat. My bet is that if these whale sharks in Oslob will be released to the wild, their routine and habits have already been altered by the feeding activity. Thus, it is imperative that the feeding of the whale sharks be stopped.

Also, even with an orientation, tourists are still bound to break some rules or circumvent them, so it’s important that the sea wardens themselves become responsible in making sure that the whale sharks are not harmed. And for tourists, we must take it upon ourselves to follow the guidelines set for whale shark encounters.

As this activity continues, there is no guarantee that tourists themselves will voluntarily boycott whale shark watching in Oslob. My take is that it has to be regulated well, like how it is being done in Donsol or close to it, while stakeholders provide alternative livelihood to the locals for the lean seasons.

Other activities that can be done in Oslob.

And for tourism, there are other things to see and do in Cebu, such as the Canyoneering in Badian or diving in Moalboal, or other attractions within the Oslob area, like the heritage park, which I will blog next.

22 thoughts on “Guidelines to Whale Shark Watching in Oslob”