El’s Coffee and the Art of Brewing Coffee 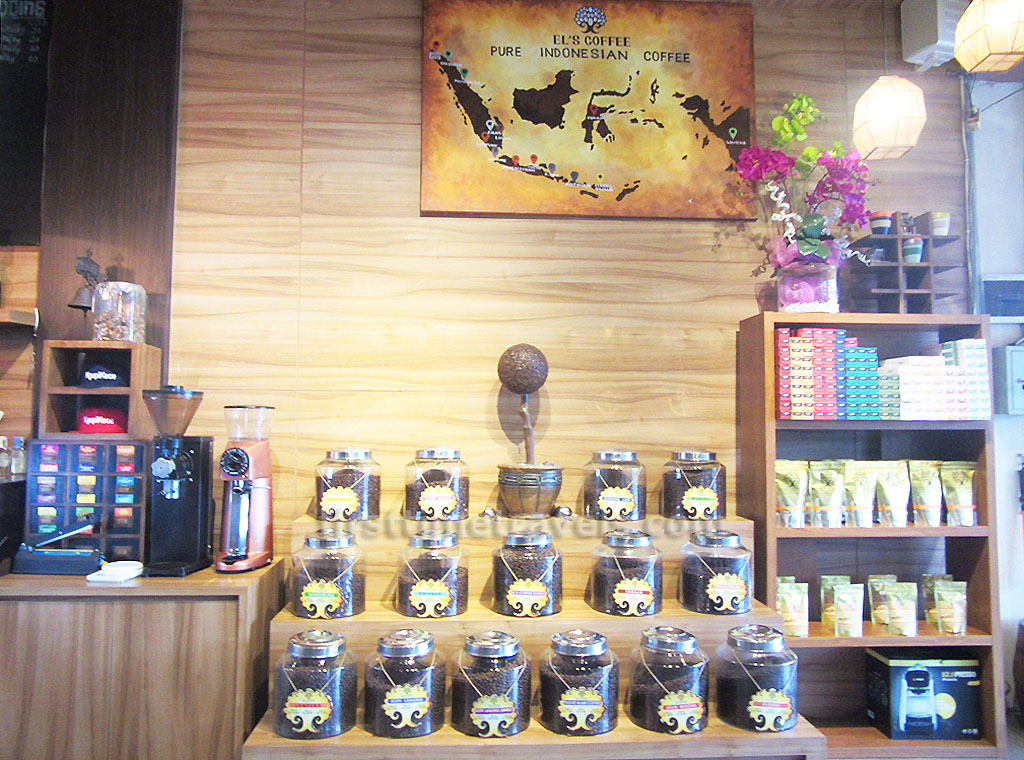 The moment we entered the doors of El’s Coffee House in Bandar Lampung, Indonesia, the whiff of the coffee’s aroma filled my senses, evoking a juxtaposed feeling of calmness and excitement. Jars of coffee beans that are stacked three layers on one side of the wall immediately caught my eye. A map of Indonesia hangs above the glass jars. I turned at the other side of the room and there were two roasting machines that looked so new, without any trace that would indicate that it was used earlier in the day. I spotted what seemed like a tall oxygen tank at the counter and wondered why it was there. But I brushed the thought aside and followed my friends.

One of the staff led us to a small room with a huge lighted COFFEE signage and a wall filled with photos of power women. What I like about El’s Coffee is that there are many divisions and rooms that you can really enjoy a quiet conversation with family and friends over… well, what else, but coffee, of course.

Entering into El’s Coffee House leads you to a whole new coffee experience.

Our bit of a corner inside El’s Coffee House. With me and Jojo are Alvita and Angki, who were our guides and hosts during our remaining time in Lampung.

(L-R) Those are the coffee machines at the left side as you enter the store. The bar counter is directly seen from the door (can you spot the tank?) Fellow Negros blogger Jojo Vito and I with El’s Coffee owner, Elky (in green).

Elky, or Elkana Arlen Riswan, arrived and sat on our table. He is a friend of Indra, my Indonesian blogger-friend, who referred us to Elky, the man behind El’s Coffee. Elky was excited for us to try his products for free and as he showed us around his store and his products we can sense his brilliance with the way he talked. His eloquence, especially when it comes to business and coffee, was even more evident as we chatted along. As he revealed more about himself, it seemed the clouds parted when he told us that he came from a family of coffee makers, originating from his grandfather who built a small business out of coffee. However, it was Elky’s father who catapulted the business into a coffee export enterprise. The trajectory continued its ascent when Elky decided to have his own endeavor and launched El’s Coffee.

By the way, here’s a bit of a Coffee 101 piece. Indonesia has two kinds of them: Arabica, which grows in the uplands; and Robusta, which thrives in the lowlands and emits a strong aroma.

Wanting us to enjoy a memorable El’s Coffee experience and to take us through the varying coffee flavors, Elky had us try their Mochatella. Each of us was served a wooden tray that carried a glass of what looked like a bed of chocolate with white foam on it and several frozen coffee cubes, along with a tiny bottle of milk, as tall as the glass. You read it right — frozen coffee cubes. That bed of chocolate underneath? It’s Nutella. This was so novel for me that I took my own sweet time pouring the milk on the coffee cubes. Elky quickly instructed me that I just pour the entire bottle of milk all at once and allow the cubes to thaw in the milk.

He then showed us their slow iced drip technique. It’s called the Nitro Coffee by El’s Coffee, which is cold brew coffee infused with nitrogen. So, that’s what the tank is all about. The set up reminded me of a science lab, complete with syphon and nitrogen tank. He also showed us their Dutch Coffee, which is ready to drink coffee in a bottle, and it is better served cold.

Everyone, I introduce you to the Mochatella.

We went back to our table and our food was being brought in. Since it was still in the afternoon, Elky had us try their Bao Series, or their snacks menu. Right there in front, the Two Ways Banana, Tempe Mendoan and Bakwan Classic beckoned to us. The food were presented beautifully as gourmet dishes and they really looked appetizing. For instance, the Tempe has grated cheese over it, with a bit of a sauce. I especially liked the Bakwan, a kind of Indonesian vegetable fritter, which has a bit of spice, topped with melted cheese, and sprinkled with sesame seeds and spring onions. The sliced bananas, on the other hand, were served crunchy, with half of the servings coated in white while the other half coated in chocolate.

And from El’s Signature Foods, we were given the Black Coffee Chicken, with fries on the side. It is called such because the chicken was marinated in a mixture that has coffee in it. It definitely gave the food an extra kick of flavor.

And while we were digging the food, Elky also asked us to taste the Cascara Tea, a kind of herbal tea made from the dried skins of the dried berries of the coffee plant. It doesn’t have the bitter taste that I expected. I like drinking tea from flowers and the Cascara Tea is something that appealed to my palate. He also served me a cup of Capuccino, which was a good way to cap our dining experience.

The one at the left is the Single Origin Coffee for Jojo and at the right is the Capuccino for me.

Cascara Tea was relaxing. I like the taste, and it wasn’t bitter at all, contrary to my expectations.

We tasted all these while we exchanged stories. Elky shared that he wants to spread awareness about Indonesian coffee, particularly Lampung coffee. He is also keen in supporting the local economy and the local artists. They often hang out in his stores or hold seminars there as well as various activities.

Apart from El’s Coffee, he also has El’s Specialty that will provide a personalized coffee experience to the customers. Another project is the El’s Coffee Lab, which will be a venue for those who want to know more about coffee and the business of roasting them. On top of these, Elky also makes sure that their baristas are trained well are happily enjoying their profession.

It seems Elky is brewing a lot of worthy endeavors in this side of Lampung. And he’s branching out. Who knows, maybe time will come when you’ll find an El’s Coffee in your neighborhood.

Other stores are located in:

Our route for this adventure.

This is part of my 12 Days in Indonesia journey that took me to four cities within this Asian country.