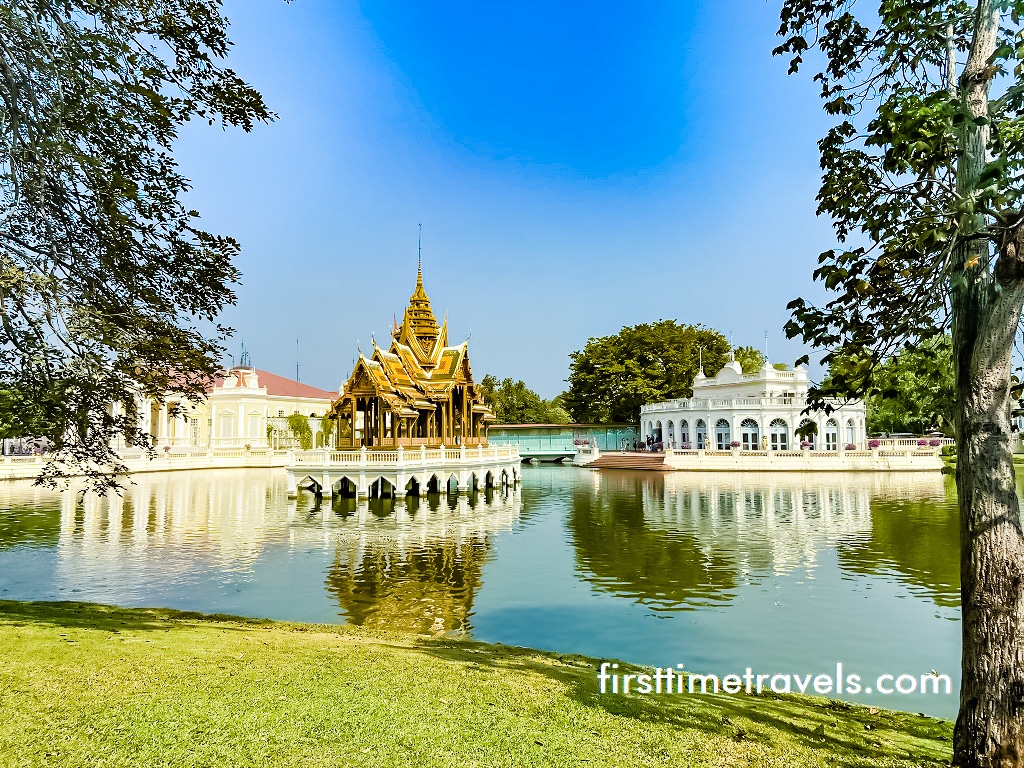 Bang Pa-In Royal Palace was built during the 17th century during the reign of the Ayutthaya Kingdom. Located at the Bang Pa-In District, 24 km south of Ayutthaya, which is about 20-30 minutes away.

The story has it that his father, King Ekathotsarot, got shipwrecked at an island along Chao Phraya River. There he met and fell in love with a woman and had a son with her. The name “Bang Pa-In” is said to correspond to Bang, meaning “place”; Pa, which meant “to meet” and “In”, which is the name of the lady that his father met.

During his reign, King Prasat Thong established Wat Chumphon Nikayaram, a monastery built on the site at Bang Pa-In Island that is believed to have belonged to his mother. The palace was constructed south of the monastery. The chronicle of Ayutthaya named only a single building within the palace complex, and that was the Asiawan Thiphaya-art Royal Residence. Later on, the palace became derelict and unkempt.

King Mongkut or King Rama IV of the Chakri Dynasty of the Rattanakosin Kingdom, the forerunner of present-day Thailand, revived the palace. He built a temporary residence on the outer island. It was near Wat Niwet Thammaprawat, which is somewhat unique because this Buddhist temple is designed in Neo-Gothic European style. However, several of the structures inside the 46-acre Summer Palace grounds were built during the rule of King Mongkut’s son, King Chulalongkorn or King Rama V. Succeeding Thai sovereigns use the Summer Palace for special occasions.

During our recent trip, we went to Bang Pa-In Palace as part of a local tour package to Ayutthaya where Bang Pa-In was the first stop. My first visit to Ayutthaya was by private car. Going there on your own may be a bit of a challenge but still doable.

There are trains from Bangkok’s Hua Lamphong Train Station that head to Ayutthaya and Chiang Mai, which are in the northern line. They stop at Bang Pa-In, but you have to start early as train schedules might be limited. It is best that you check the schedules and purchase your tickets beforehand. Once you arrive at the Bang Pa-In Train station, you can opt to walk to the Summer Palace or take a songthaew, which is a cross between a pick-up and a jeepney. It is around 2 km from the station to the palace and it may take about 25 minutes to walk if you are considering that option. However, it may become too hot and you will also be walking around the Summer Palace, so it’s best to take the songthaew.

Another mode of transport is the bus, which you can take from Bangkok’s Northern Bus Terminal Station in Mo Chit. You can opt for a bus bound to Nawa Nakhon or Ayutthaya, as Bang Pa-In is somewhere in between. But the one closer to Bangkok is Nawa Nakhon, and then you can continue your journey by taxi or songthaew.

Admission to Bang Pa-In Palace is THB100 (about USD3.33). It is open from 8:00 am to 4:00 pm but the ticket booth closes at 3:30 pm. It is best advised that visitors should dress politely. Sleeveless shirts, tank tops, short pants and short skirts are prohibited inside the palace grounds. Short pants are not allowed even among men. Those who are wearing clothes that are deemed inappropriate will have to rent a shawl or scarf to cover the shoulders or wrapped around the waist.

Landmarks around the Summer Palace

After Roger gave us a brief about Bang Pa-In Palace, we were given about 45 minutes to explore the entire compound on our own. There were golf carts available at THB400 per hour and THB100 per succeeding hour. There are regulations in place when renting the carts, and there was a line of visitors at the rental booth so we decided to just walk around the sprawling property. It is divided into the Outer Palace, where structures are used for public and ceremonial gatherings, and the Inner Palace, which is only for the royal family, and male members of the court were once prohibited in this area. These are the buildings found at the outer Palace.

We passed by a tiny stone edifice midway the rectangular pond that greeted us at the entrance. The structure is a Khmer-style prasat and it has the image of Buddha inside. This was built in 1880 under the directive of King Chulalongkorn dedicated to King Prasat Thog of Ayutthaya.

This colonial-style building is the Assembly Hall for royal relatives. The two-storey structure was built in 1876 for King Chulalongkorn’s accommodations and his brothers’ suites. The edifice also put on display various artifacts.

One of the first things that captured my interest was this Thai-style pavilion at the center of an outer pond. The pavilion has four porches with a spired roof. It was also built in 1876 by King Chulalongkorn. It looks like the Phra Thinang Aphonphimok Prasat found in the Grand Palace that was built by King Mongkut where they change regalia before they mount a palanquin. It was named as Phra Thinang (Royal Residence) Aisawana Thiphya-Art (the divine seat of personal freedom) after the original pavilion of King Prasat Thong. Now, the pavilion keeps a bronze statue of King Chulalongkorn in a Field Marshal’s uniform. It was placed there by his son, King Vajiravudh or King Rama VI.

Another European-inspired Neo-classical building in the complex is the Phra Thinang Warophat Phiman or the Royal Residence of Excellent and shining heavenly abode. King Chulalongkorn also had this one-story mansion built during 1876 as his residence and throne hall. Oil paintings of significant Thai events and Thai literary scenes are hung at the audience chambers and anterooms. King Chulalongkorn himself commissioned the historical paintings in 1888. When the Royal family visits Bang Pa-In, they still use the private apartments that are found in the Inner Palace section.

A covered bridge with louvred wall separates the Inner Palace from the Outer Palace. This louvred wall on one side of the bridge allowed court ladies to look out while not being seen from the opposite side. The bridge is a passage from Warophat Phiman Mansion to the Thewarat Khanlai (The God King Goes Forth) Gate, the main entrance to the Inner Palace. Residential buildings, gazebos and pavilions dot the Inner Palace. It also has an expansive garden, especially that King Chulalongkorn loves gardening.

Structures inside the Inner Palace are the following:

This semi-circle building displays some interesting artifacts. But people come here because it provides refuge to visitors since drinks are sold in this building. There are also tables and chairs where they can view the pond from the inside, while at the other side is the sprawling gardens.

It is a colorful observatory that serves as a lookout tower and a place to view the Palace grounds and its surroundings. We didn’t climb the observatory due to save time and to conserve our energy.

The favorite residence of King Vajiravudh or King Rama VI, this Chinese-style mansion is near the lookout tower that one will not miss when roaming around the property.

This is King Chulalongkorn’s favorite residence. It was under renovation when we visited Bang Pa-In Palace. It was accidentally burned when minor repairs were done in 1938. Her Majesty Queen Sirikit expressed her wish to have a new building replace the old structure and it was done in 1996. The remaining part of the original structure that was retained was the water tank, which appears as a Neo-Gothic tower.

During a boat trip along Chao Phraya River in 1881, disaster struck upon the boat bearing Queen Sunandakumariratana on her way to Bang Pa-In Palace. At that time, commoners were prohibited to touch royalty and committing it was punishable by death. People only watched the tragedy and couldn’t do anything. Overcome with sorrow, King Chulalongkorn built a marble obelisk to her memory. In 1887, King Chulalongkorn’s consort, Princess Saovabhark, and his three children passed away, so he had a marble cenotaph placed near the Memorial to Queen Sunandakumariratana in their honor.

It was almost noon when we finished walking around the property. The sun was high, and we were sweating from the heat and the physical exercise. It was time for us to leave the Palace and move on to our next destination in Ayutthaya.

← The best Pad Thai at Thipsamai ← A day trip to Ayutthaya