A day trip to Ayutthaya 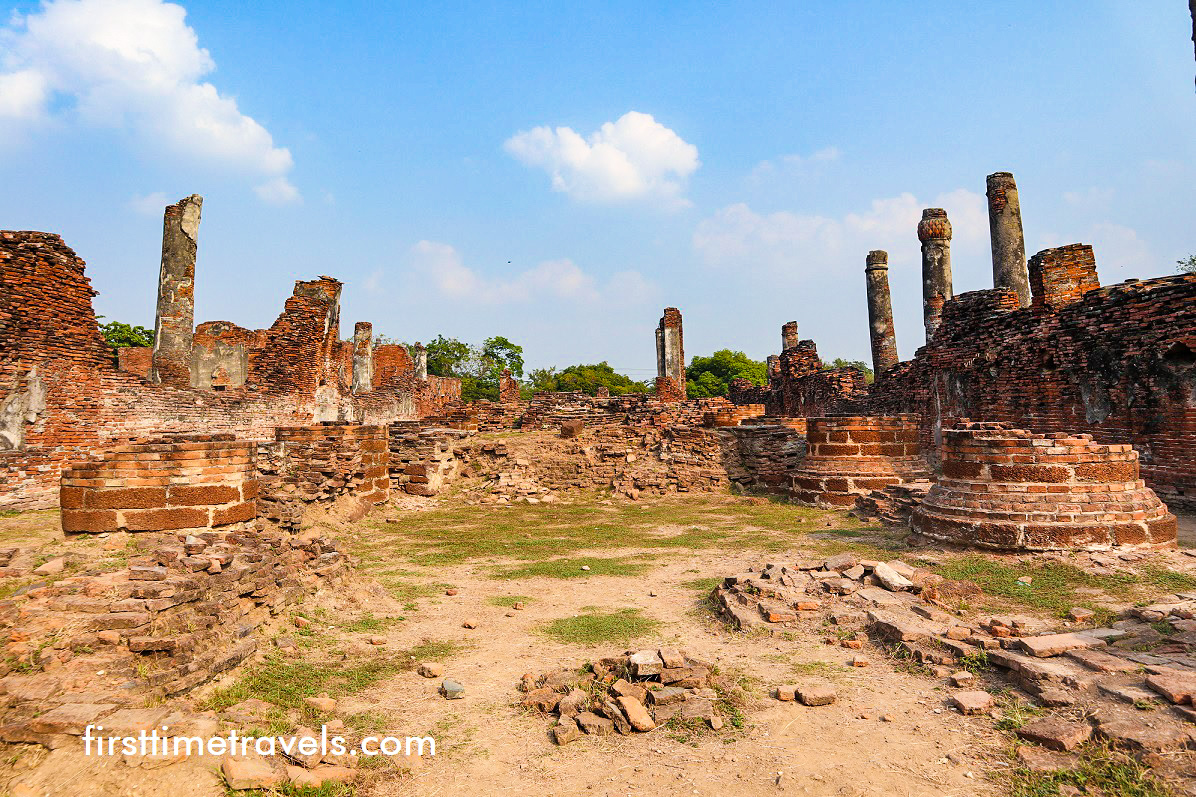 During my first trip to Thailand in 2001, Ayutthaya was one of the places we visited. It was an extremely hot day and I could remember seeing ruins, stupas and chedis. But digital cameras and smartphones were not yet common at that time and all I have are a few film photos in my album. Now, after almost two decades, I’m back in Ayutthaya, the seat of the Ayutthaya Kingdom that ruled from 1350 to 1767 by 33 kings, long before present-day Thailand came about.

Thailand, formerly Siam, recognizes Sukhothai as its first kingdom that reigned from 1238 to 1438. It was followed by the Ayutthaya kingdom. The third was the Thonburi Kingdom which only lasted for 15 years from 1768-1782. The last is the Rattanakosin Kingdom of the Chakri Dynasty, which is presently reigning the land. It was during this era when the country became officially known as Thailand.

The Kingdom of Ayutthaya was founded by King U-thong or King Ramathibodi I. The old capital, which is Ayutthaya or Phra Nakhon Si Ayutthaya, is now a municipality in the Phra Nakhon Si Ayutthaya province.  It is found in the valley of the Chao Phraya River. Surrounded by three rivers, the central part of the city sits on an island.  the central portion, especially the island is part of the Ayutthaya Historical Park and declared a UNESCO World Heritage site. Most of the landmarks and attractions are in ruins. They were heavily destroyed during the Thai-Burmese war as most of the structures were burned and pillaged.

As such, I was so excited to be back to Ayutthaya and revisit the history of Thailand. We availed of a local day tour, and we had to meet at 9:00 am at Siam Paragon. Our guide for the English tour was Roger, and he ushered us to four vans parked outside the mall. Each van must have a dozen people because there were 12 of us in our vehicle, which was more manageable because we didn’t have to wait for the rest of the group.

We traversed the highway going north for about an hour and a half until we reached our first destination for the day. We then arrived at Bang Pa-in Palace where we spent about an hour exploring the place before we went for lunch. For a more detailed account of our visit at Bang Pa-In Palace, please read my post, First-time in Bang Pa-In Royal Palace.

Going to Ayutthaya on your own

The first time I visited Ayutthaya, I went with colleagues and one of them had a Thai friend who drove us all the way to Ayutthaya and around the ruins. This time, we joined a group tour. However, if you plan to go to Ayutthaya on your own, you can take the train from Hua Lamphong Station as there are several trips from Bangkok to Ayutthaya throughout the day.

Another option is to take a bus from Mo Chit at the Northern Bus Terminal Station. At the station, you can inquire on the bus number that will be leaving for Ayutthaya. If you prefer to take the minivan, there are vans bound for Ayutthaya near the Victory Monument BTS station. The fastest but most expensive way is to hire a taxi or private car.

If you want a different experience getting to Ayutthaya, you can go there by riverboat. Cruises from Bangkok to Ayutthaya are being offered, with a stop at Bang Pa-In Palace.

Once you are in Ayutthaya, you can rent bicycles to go around the temples and ruins. Remember, however, to observe precautionary measures for your safety. If you are not comfortable riding in bikes, then hire a tuk-tuk that can take you around the attractions you want to visit.

The restaurant was all in Thai script so I really don’t know the English name of the place where we had lunch except that it’s ก๋วยเตี๋ยวเรือวัดใหญ่ (วัดใหญ่ไก่ฉีก) in Thai, which literally translates as Boat noodles at Wat Yai (Wat Yai Kai Tiew).  Near the entrance of the eatery are large jackfruits on display. Since the restaurant is open-air or without walls, there are trees surrounding and within its property. A huge jackfruit tree filled with fruits hanging on its trunk stands in the middle of its kitchen.

There were many tour groups spending their lunch inside the restaurant. We got some Thai pork barbecue, spring rolls and iced milk tea. Although we didn’t get to enter Wat Yai Chai Mongkhol, we could see the large chedi from the outside. It is a Buddhist temple and monastery that was built in 1357 by King U-thong for the monks. This temple and the eateries around it are a bit outside Ayutthaya island but is only a few minutes away from the other temples.

After a filling lunch, we proceeded with our tour around Ayutthaya.

I remember visiting Wat Mahathat 18 years ago, but at that time, I had little knowledge of Thai history, especially of Ayutthaya. Back then, I couldn’t put it in my mind how life went at the heyday of the Ayutthaya Kingdom nor fully grasp the significance of this era in Thai history that has led to its present.

Since it is near the Grand Palace of Ayutthaya, Wat Mahathat houses the royal monastery and seat of the Supreme Patriarch of the City Dwelling sect. Built during the 14th century, the complex has a Khmer-style stupa that bears the relics of Buddha.

One of the postcard photos of Ayutthaya is Wat Mahathat, which means Temple of the Great Relics. It is where the head of the Buddha is wrapped by the trunk and roots of a tree. But when taking photos, the head of the Buddha must always be higher than anyone else. So, they provided a wooden plank where visitors can sit on the foreground.

Wat Mahathat is open from 8:30 am to 4:30 pm and entrance fee for non-Thais are THB50, as are common in many historic sites around Ayutthaya.

Wat Phra Si Sanphet is regarded as the most sacred temple used by the royal family. No monks resided in the monastery as this is considered as a royal monastery. It is located within the old Grand Palace complex of Ayutthaya that King U-thong or Ramathibodi I, founder and first king of the Ayutthaya Kingdom, built in the mid-14th century. But Wat Phra Si Sanphet itself might have been built a century later.

After the first two chedis were built, King Ramathibodi II added a worship hall as a royal chapel for a golden standing Buddha image, called Phra Si Sanphet, that is of gigantic proportions. However, most of the structures in Wat Phra Si Sanphet were destroyed during the Burmese invasion.

A few walks away and within the vicinity of the Wat Phra Si Sanphet and Grand Palace complex in Ayutthaya is the Wihan Phra Mongkhon Bophit, a temple with a modern structure that houses the huge statue of Phra Mongkhon Bophit or Buddha of the Holy and Supremely Auspicious Reverence. It is almost 13 meters tall. Notwithstanding its modern look, it also traces a long history based on the photos that were also on display inside the temple. The original image was carved during the rule of King Chairacha (13th king of Ayutthaya). The image was moved when the first temple that housed it was laid in ruins. The image went through several restorations and a new temple was built.

A few minute-ride from the Grand Palace complex is Wat Lokaya Sutha or the Temple of the Earth, which is known because of the giant outdoor reclining Buddha. Lying at 42 meters long and 8 meters high, it is one of the largest reclining Buddhas in the country. The whole complex has two other wats nearby. It was already late in the afternoon and we no longer had time to explore the vicinity of Wat Lokaya Sutha.

Other attractions you can visit while in Ayutthaya:

I cannot recall the other places I have visited during my first trip to Ayutthaya, but these are the other sites that you can explore when you are in this historic city.

When visiting any temple, be sure to note these rules:

You may opt to spend a night or more in Ayutthaya to fully explore the place. But if time is of the essence, a day trip from Bangkok and back will be enough to marvel at the beauty of Thailand’s colorful past.

One thought on “A day trip to Ayutthaya”