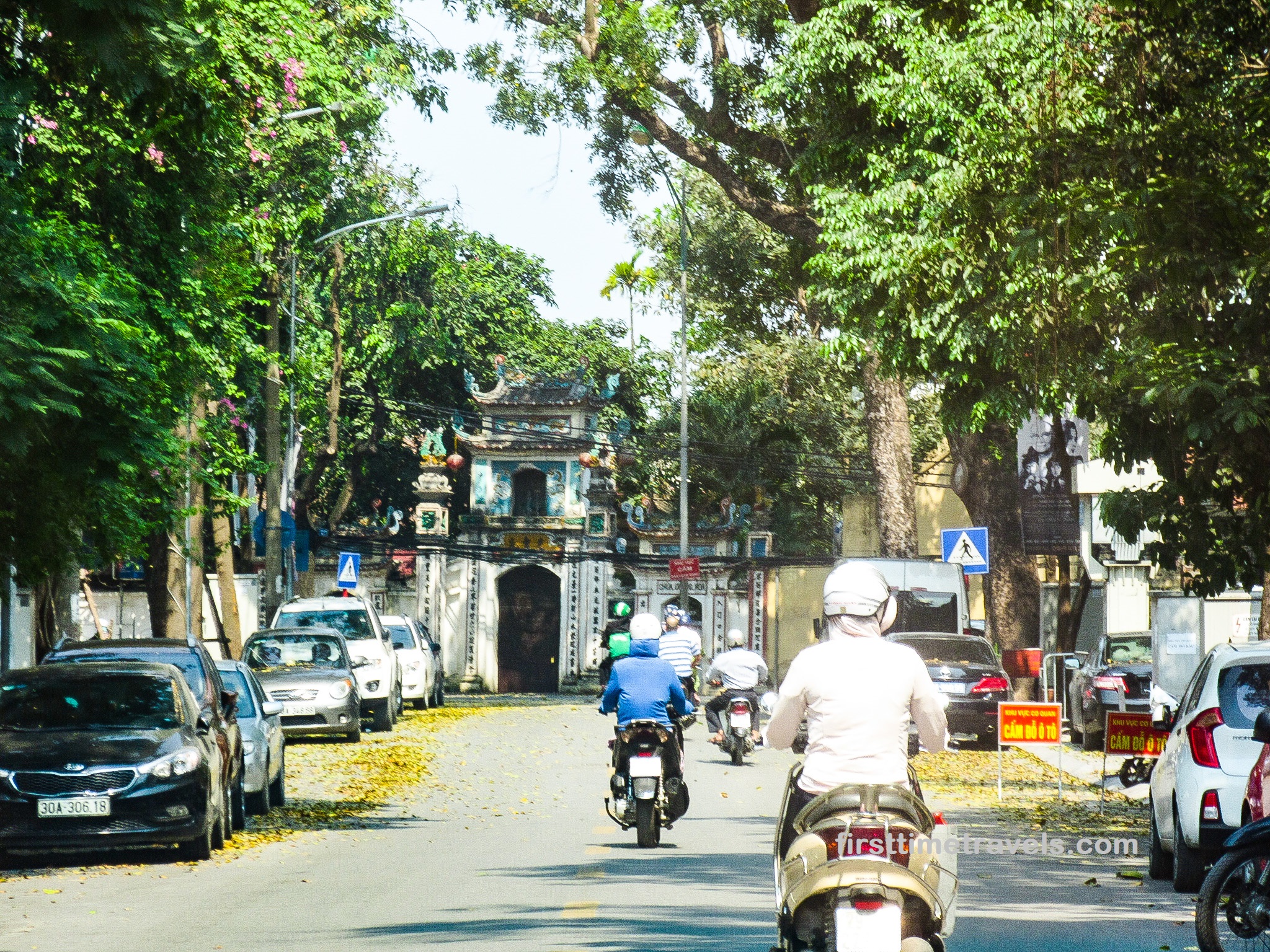 Hanoi, the capital of Vietnam, is a sprawling city in the northern part of the country that has much old architecture and cultural and historical attractions that give off a charm that delights visitors and locals alike. Although it’s not my first time in Vietnam, since I have visited Ho Chi Minh City in the south years prior, Hanoi has shown me a different vibe of the country. The mix of the old and new, Asian and French architecture, as well as the fusion of a busy and laidback atmosphere, have definitely caught my interest.

Look through the eyes of a first-timer as I share with you my experience roaming Hanoi during my first visit to this city.

How to get there:

You can get to Hanoi via the Noi Bai International Airport or if you’re coming from other parts of Vietnam, you can go to Hanoi by taking the train, Vietnam Railways or the Reunification Express. Coming from nearby countries like China, Laos and Cambodia, you can also opt for buses, but you have to endure the long ride.

From the airport, you can take a taxi to your accommodation or you can use the Grab app, which can give you a fair price. Taxis are available 24/7 as we arrived in Hanoi at 2:00 am. Just be wary of drivers that may take advantage of tourists.

There are certain things to note and attractions to consider visiting in Hanoi that may help first-time travelers.

Things to note when in Hanoi:

Places to see and visit:

There are plenty to see in Hanoi. Just by walking around the Old Quarter, we stumble upon interesting architecture or attraction. You can start off with the following landmarks.

Hoan Kiem Lake or Turtle Lake is one of the main attractions of Hanoi. Located near the Old Quarter, the lake serves as a favorite hangout place of locals and tourists who want to enjoy the serenity within the bustling city. In the middle of the lake, the Turtle Tower can be seen, which is believed to be part of a legend.

Temple of the Jade Mountain

On an island within the lake stands Ngoc Son Temple or the Temple of the Jade Mountain. Entrance to the island is 30,000VND per adult (app. 1.30USD) and 15,000VND for students (app. 0.65USD). It is free to children below 15 years old. The temple is open only during weekdays from 7:00 AM to 8:00 PM. Once admitted at the gate, you will have to cross the Huc Bridge (Morning Sunlight Bridge) to get to the main temple area. The temple was built around 18th century in honor of military leader Tran Hung Dao.

Around the periphery of the lake is the Thang Long Water Puppet Theatre, featuring puppets telling the story of Vietnamese life and legends with the use of water as its stage. Some of the performances include the boat trip of Emperor Le Loi, glorious return of the candidates to their village after passing the national exams, Vietnamese farmers’ works, fairy dance, phoenix dance, and regatta.

The UNESCO World Heritage Site Thang Long Imperial Citadel traces its beginnings in the 11th century when the first structure, the royal enclosure, was built by the Ly Viet Dynasty. After witnessing the various changes in Vietnam throughout the centuries as the seat of political power for many years, the Imperial Citadel now stands as a testament of  Vietnam’s rich cultural and historical heritage. The citadel is open from Tuesdays to Sundays (it is closed on Mondays), 8:00 AM to 5:00 PM with an entrance fee of 30,000VND (app. 1.30 USD).

Located in Ba Dinh Square, the Ho Chi Minh Mausoleum houses the remains of Vietnamese leader Ho Chi Minh. Although entrance to the mausoleum is without cost, it follows a strict dress code. Also, it is only open from 7:30 AM to 10:30 AM during Tuesdays to Thursdays and from 7:30 AM to 11:00 AM on Saturdays and Sundays. Since his remains are sent annually to Russia for maintenance, the mausoleum may not be open to the public during October and the succeeding months.

Behind the Mausoleum within the Ho Chi Minh Complex in Hanoi has a vast collection of the life and works of Ho Chi Minh. On the topmost floor stands his giant bronze statue. It is best to explore the museum starting from the top going down. Entry to the museum costs 40,000VND (app. 1.72USD) for international visitors. It is open from Tuesday to Thursday, Saturday and Sunday from 8:00 AM to 12:00 PM and 2:00 PM to 4:30 PM. On Mondays and Fridays, it is only open from 8:00 AM to 12:00 PM.

Behind the Ho Chi Minh Mausoleum and near the Ho Chi Minh Museum is this tiny temple that stands in the middle of a square pond, supported by a single pillar. It is said that the One Pillar Pagoda was built in the 11th Century under Emperor Ly Thai Tong’s reign to resemble a lotus flower. A stone’s throw away is the Chua Dien Huu Pagoda, also built in the 11th Century. This small temple has a courtyard and a shrine. Monks were praying during the time of our visit, so we decided to just pass through en route to the Ho Chi Minh Museum.

The Neo-Gothic Catholic Church is found in the heart of the city. The structure was first built in 1886, patterned after Notre Dame Cathedral in Paris, France. It’s a few blocks from Hoan Kiem Lake as we walked from the cathedral to the lake. We attended the Easter Vigil Mass on Black Saturday and the cathedral was filled with devotees. Even the aisles were crowded that night. As we walked out the cathedral, churchgoers filled the front of the church. We visited also during the day and the afternoon and tourists always filled the front part of the building, trying to get photos of the façade.

From the church walking to the lake, we stumbled upon Ba Da Pagoda, which was a small archway between buildings, with a narrow alley leading to a courtyard. But it was late at night and dark, so we retreated and went back to the main road. Another interesting attraction that we also accidentally found was the Ca Tru traditional music performance venue near our hotel in the Old Quarter. We initially thought it was a small temple. The caretaker was already turning off the lights when we took a peek inside.

As we were riding a Grab car around the city during our last day, we passed by this art deco building that caught my eye. It turned out that it’s the State Bank of Vietnam. Built after 1930s, the structure’s middle façade is a convex while both wings have long columns and a porch area. The building is located along Ly Thai To Street and near the Hanoi Opera House.

If you are heading to other parts of Vietnam, you can head over to the Hanoi Railway Station where trips to various Vietnamese cities and towns are available. But more than just a hub to the rest of Vietnam, the station is also a heritage site as it opened in 1902. Although certain portions of the building were damaged during the Vietnam War, there were still parts that were preserved.

We were curious about this mall. When we got off our Grab car, we only saw what seemed like a glass-enclosed archway. Behind it was just a flat surface with a long water fountain in the middle surrounded by statues that looked like Greek gods. Tall buildings stood at the horizon, but the scorching sun was reflected on the flat cement surface in front of us. We entered the archway that led us to the mall below the fountain. Vincom Mega Mall Royal City. Various local and global brands can be found here. There are two levels and the lower level is where you’ll find many restaurants and eateries. There are also water fountain and koi pond at the lower floor. Inside the mall is a water park, skating rink, gaming centers, and theaters.

There are more places to visit in Hanoi, but we only had two full days to see the city for the first time. It’s best to explore the city on foot. The good thing about Hanoi is that it’s streets are full of trees. But you have to watch out for the many motorbikes when walking or crossing the streets. The Vietnamese are also warm and hospitable, so that also makes your visit more enjoyable. Also, we had to allocate another full day just to go to Halong Bay, which I’ll feature in my next post.

← 10 Things to See in Iloilo ← First-time in Halong Bay