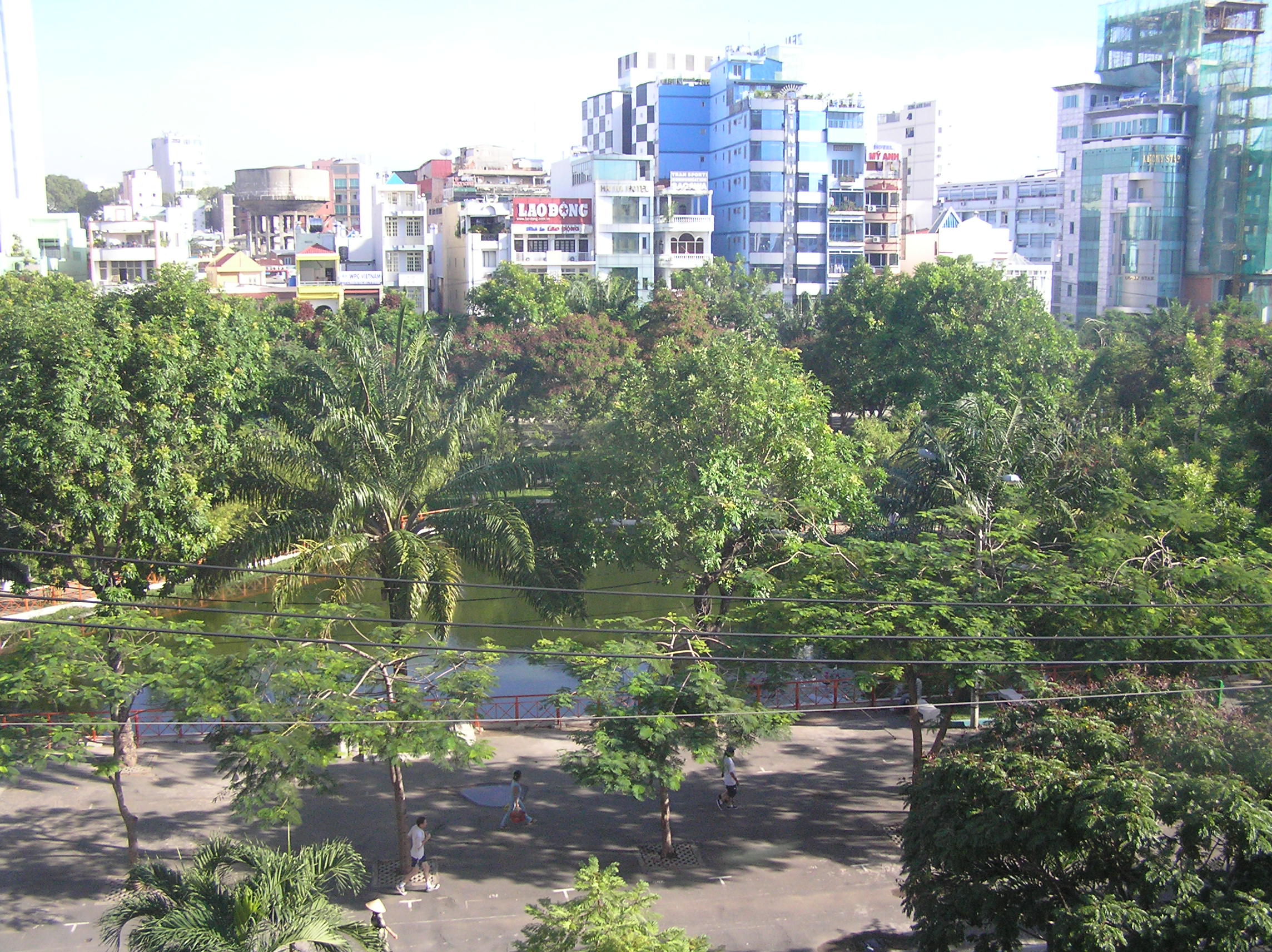 When I posted online that I was embarking on a long trip and one of my destinations would be HCMC, so many asked me if I were going to Hong Kong and Macau. For the uninitiated, HCMC is Ho Chi Minh City, formerly known as Saigon. It is the biggest city of Vietnam and the country’s economic hub.


Taking the Sapaco Bus Line, we exited Cambodia via the Bavet – Moc Bai boundary.  We had to unload the bus, including our luggage, to go through immigration and then board again, all for a good 30 minutes or less. It was easy for citizens of the ASEAN countries, like the Philippines, to enter other member-nations.

Although it was still a flat plain that greeted us as we crossed to Vietnam territory, the scenery was greener and more modern architecture.

From Cuchi until we neared Saigon, we’ve been seeing motorcycles along the main highway. But as we entered the city, there was a traffic jam of hundreds of bikes in Ho Chi Minh’s wide avenues.

Nevertheless, with a HCMC map on hand as reference, it was easy to determine our location because of the slow traffic.

We were stuck for about an hour or more within the city until the bus finally made its stop at Pham Ngu Lao, the famous backpacker’s street and where our hotel was located.

Hanh Hoa was a narrow building along Pham Ngu Lao, dwarfed by larger hotels nearby. But don’t be deceived by its façade. The small building had the nicest hotel room we’ve had in this entire journey, so far. And it came in cheap as well, with almost similar rates as Tune Hotels.com in KL and Phnom Bok Hotel in Siem Reap. Royal Guest house was the most expensive in the trip and we didn’t get the right value for our money. The Hanh Hoa staff was also friendly despite some difficulty in English. Our hotel room came with free breakfast. But breakfast were rice noodles and bread only (garlic bread was bread with a saucer of garlic sautéed in butter).

We got a family room at Hanh Hoa. It was a spacious room with wide windows that provide a wonderful view of HCMC. It has a computer installed in the room that has internet access. On top of this, there were so many wi-fi connections available, making it easier for me to connect with my Asus EeePC.

Hanh Hoa, which is part of District 1 of HCMC, was conveniently situated in landmarks and shopping destinations. The whole block of Pham Ngu Lao was a backpackers’ area filled with hotels, travel agencies, bars, restaurants, boutiques, and souvenir shops. And if we wanted to relax, there was a park across the hotel.

Everything you can find in District 1

District 1 seemed to have it all. With the traffic in HCMC, we decided not to venture far from District 1. We had two days to visit interesting spots. Although we didn’t know it was there, we found the Tourism Information Center at Le Lai St., strategically located between the Opera House and the People’s Committee Hall.

The Opera House was a beautiful European-style architecture, which has brick-like roof. Images of angels adorned the top of the arch of its façade while goddesses served as columns.

Just across the fountain rotunda was the People’s Committee Hall or the city hall of HCMC.  French art influence was evidently all over the place. It has intricate designs with arches and a clock tower that provided a classical touch. In front of the hall was a park that housed the statue of Ho Chi Minh, the Vietnamese leader from whom the city was named after.

We walked a few blocks further behind the city hall to visit the famous Notre Dame Cathedral. The beautiful image of the Regina Pacis (translation, “Our Lady of Peace”) erected in front of the Cathedral was a sight to behold.

We passed by the Reunification Palace but it was closed for lunch. Our feet were still aching from our Angkor Wat escapade and all the walking under the scorching sun was already draining us.

Pho food and no free wipes

When you say “Vietnamese food,” Pho (or rice noodles) instantly comes to mind. We had our fair share of Pho meals at HCMC. But whenever you enter an eatery, may it be a fast food joint or restaurant, don’t open the tissue wipes offered at your table because they come at a price. We realized it wasn’t free when we got the bill and found out that we were charged for opening the individually packaged tissue wipes.

After how many days of local food, we craved for the usual fast food joints that jot every city in the world and so, we had our first meal in HCMC at KFC. The store had special promos and VO cards were available for free.

We visited Ben Than market but it was too warm inside the market. There was also a system wherein stores near the entrance sell goods at a fixed price (we really couldn’t haggle) while the stalls in the inner part of the market sell their products at a higher rate but can still be haggled for discount. It was crazy and we were able to buy only a few things which we could bring home to friends.

One of our purposes for visiting Saigon was to buy Kipling and North Face bags because of its cheaper price. I’m not sure why these bag brands, which are known to be very expensive, were more affordable in HCMC but I think it was because they have factories in Vietnam.  They really came at very good price range that I was even surprised. We bought several Kipling bags – different sizes, different styles, different colors, and different designs. They were so affordable that I could go back to HCMC just to buy more of them.

Apart from Kipling and North Face, some friends also asked us to buy coffee-coated or milk-coated peanuts which were made in Vietnam. We packed our belongings and our luggage multiplied with all the things we’ve brought at HCMC.

And whichever mall or shopping place we went, we would always bump into fellow Filipinos who were also spending their holidays in this southern city in Vietnam.

It was the end of our Southeast Asian sojourn. Another adventure is yet to come.

One thought on “First-time in Ho Chi Minh City”