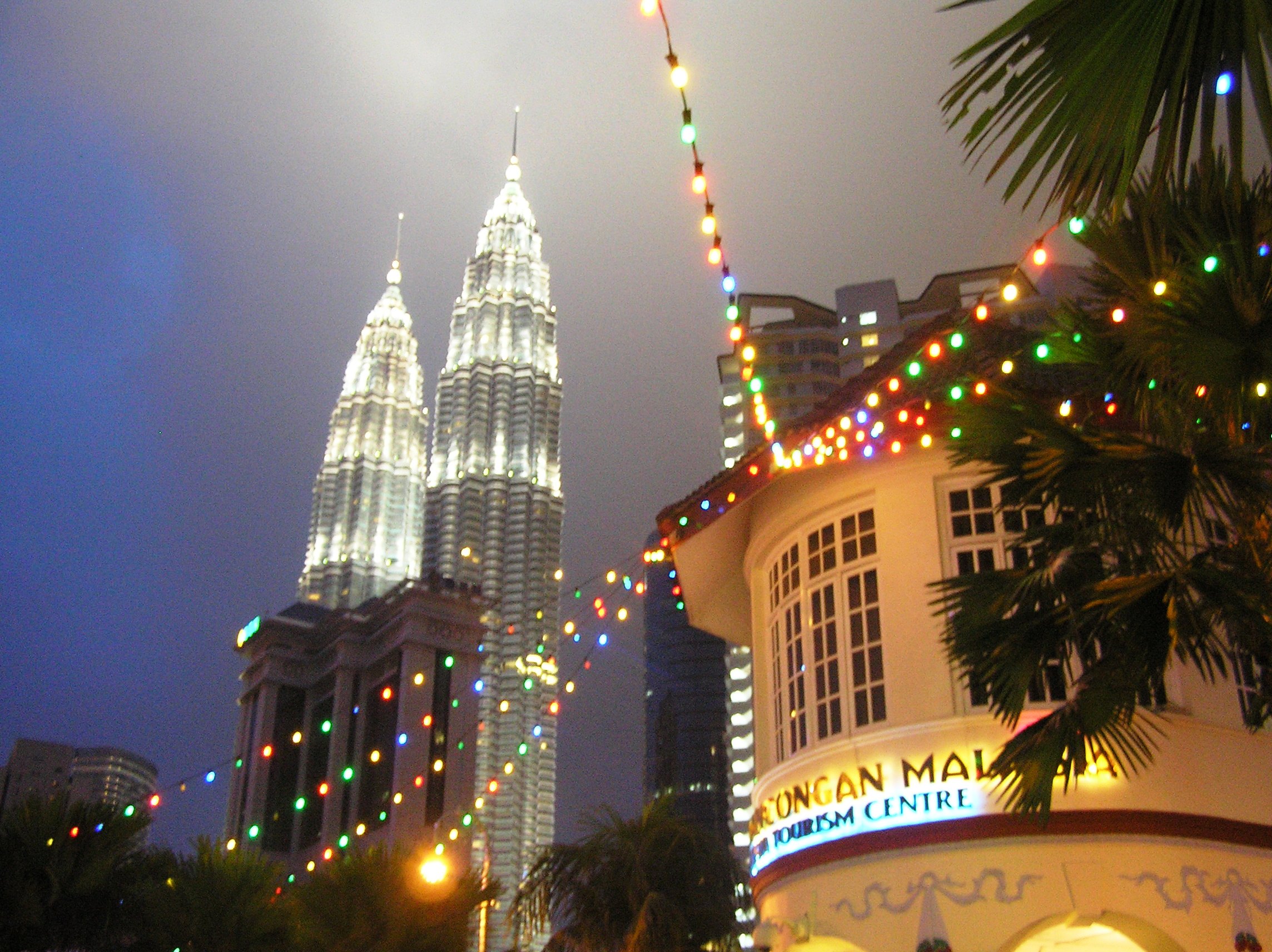 Although I haven’t been to Malaysia before, I was very much familiar with this country. For one, I have studied its history and much of its political environment back when I studied international studies and through watching the global news. Two, the language is very much similar to Bahasa Indonesia, which I spoke when I lived in Jakarta. Three, its tourism ads are shown in many cable channels (I can almost hum their song in my mind). Four, there is a connection between the Philippines and Malaysia throughout history. And finally, the Petronas Tower is a landmark that will never be missed and with the F1 coming up…


Our trip to Kuala Lumpur (KL) was one year in the making. Air Asia, one of the budget airlines from Malaysia, did a promotion and we instantly grabbed the opportunity. We bought tickets that would take us from Clark, Pampanga to Kuala Lumpur and then from Kuala Lumpur to Siem Reap, Cambodia all for only P3,000+ (US$60+). The ball started rolling and every piece of the puzzle just came into place until we finalized our plans.

The F1 was ongoing when we were in Malaysia.

A Tune to lay our heads

As our plane landed in the KLIA Low Cost Carrier Terminal (LCCT) a green expanse of palm plantation greeted us. Palm oil production is one of the industries of Malaysia. KLIA is about 50 kilometers from the heart of KL. Travel time is about an hour, and you will pass through palm plantations on your way to KL central. With this in mind and with an early morning flight out of KL, we decided to stay at Tune Hotels.com at LCCT, which is just about a minute or two walk from the terminal.

Tune Hotels.com is a chain of budget hotels that offer affordable yet clean and comfortable accommodations to travelers in Malaysia. Their branch at LCCT was newly opened and we were fortunate to get a booking with the influx of travelers this time of the year. A lot of tourists were also bound for KL because of the Formula 1 Petronas Malaysian Grand Prix. The venue was held at the Sepang Circuit which is close to the airport and Tune Hotels.com was a good choice for the grand prix enthusiasts.

There are small shops at the ground floor of the hotel and guests can hang around at the open-space lobby. Shuttle buses come every now and then to ferry visitors to and from the airport. The rooms were quite small and there were only two electric sockets. The hotel is most affordable if you settle for its basic services (room, beds, electric fan, water and lights) but every additional service has additional fee. There is also an internet room near the front desk which keeps visitors connected to their families and friends.

Although Tune Hotels.com is conveniently located within the airport compound, it is not a good site for those who would like to enjoy the nightlife at downtown KL because buses from the Central bus station to LCCT are only until 10:00pm.

We arrived at KL late in the afternoon but the sun was still up. (At 7:00 pm, the sun was still shining and this puzzled me only to find out that all of Malaysia, including KL, follows the Eastern Malaysian time zone.) We readied ourselves for a wonderful night in KL. Getting to central was easy because of the many buses plying the LCCT-Central route at the airport and it costs RM8 or about US$2.

Roger, our friend from OneASEAN.multiply.com, and his companion Vic brought us at Saloma Theatre Restaurant, named after a Malaysian celebrity, where we feasted on a buffet of dinner and an enjoyable cultural show. Kryzzie, another OneASEAN Multiply member joined us and brought us delectable chocolates from the Cocoa Boutique.

Performances at the Salome Theatre.

They showcased the different cultural influences that make up what Malaysia is today. There was a mix of Chinese, Malay, Indian, and Portuguese dances. Some of the dances were quite similar with Philippine folk dances especially with the use of native products like bamboo and coconuts.

The last part of the show provided an opportunity for guests, especially from various countries, to take part in the dances. It was fun to see all of them trying to learn Asian dances.

After the sumptuous meal, jovial dance show, and picture-taking, we headed off to Conlay, where we sang to our hearts content a mixture of Filipino, Malaysian, Indonesian and English songs. It was past midnight when we were done and the hotel was still an hour away.

Despite the lateness of the night, there were still a lot of people in downtown KL especially at Jalan Bukit Bintang (Star Hill St.) It was a long drive and another day was yet to unfold.

A Nature Trip to a Giant Aviary

The KL Bird Park is considered the world’s largest free-flight walk-in aviary. True enough, the bird park’s wide vicinity and variety of attractions didn’t disappoint us. Although we got there by private car, the aviary was very accessible since it was close to the KL Sentral Station and the Merdeka Square. They open at 9:00am and they admit adults at RM 39.00 (US$10+).

The flamingos at the aviary.

The love aviary greeted us at the entrance where colorful birds were charming the guests as they enter. I’m not at all familiar with all the bird names but I can somehow identify some of the birds I’ve seen at the aviary.

The peacocks were everywhere and some were even walking with us as if leading the way. There were a number of feeding points and small pockets of man-made bodies of water for the flamingos, storks, ducks and other birds who love the water.

Attractions inside the bird park were the Flamingo Pond, Horn bill Park, World Of Parrots, Waterfall Aviary, Children’s Playground, and Amphitheatre where the bird show is done at 12:30pm. Although the park’s primary target audience are the kids, those who are young-at-heart can also enjoy a morning walk around the aviary.

To cap our visit, we watched the bird show at the amphitheatre. However, when it was almost at the end of everything, rain started pouring in and the show has to be cut. We ran for cover but didn’t’t make it to dry land. Our gracious host, Roger, bought us all flamingo-designed shirts at the Horn bill Souvenir Shop and treated us (again!) to a sumptuous lunch at the Horn bill Restaurant complete with horn bills and other birds watching us at the terrace.

The Tale of the Muddy City

“Kuala Lumpur” literally means “muddy estuary” because of the muddy rivers that converge at one point in the city. The city used to be mines until it became a trading post. We were brought to the spot where these two rivers converge, which is just behind the Sultan Abdul Samad Building. Just across the building is the Merdeka (independence) Square where Malaysia’s independence from Great Britain was proclaimed. A 95-meter flagpole stands in one end of the square.

The story of the muddy city came from this exact location.

A few blocks from Sultan Abdul Samad, at the other side of the river is the Central Market where various local products, from souvenir items, to arts and crafts, to clothing and textile, could be found. Of course, we wouldn’t pass the opportunity to explore the Central Market.

And then, a few meters down the road where Merdeka Square stands is the National Mosque (Masjid Negara), which takes on a modern look in its architecture. Right across the mosque is the Old Train Station with its Moorish design which I have mistaken as a mosque.

A trip to KL would never be complete without a visit to the famous Petronas Twin Towers, which held the title of the tallest building in 1998 until 2004, when Taipei 101 grabbed the record.

Still, everyone looks up at the twin towers of Petronas. With its figure gracing every KL postcard, brochures and promotional materials, it was hard to get a different angle on the famous Petronas Towers. I managed a bit and am extremely happy with the shots I captured.

At the base of the towering skyscrapers is the Suria KLCC, which is a shopping mall. Given that we were at KL at the height of the Grand Prix season, Suria displayed various Grand Prix paraphernalia and race cars.

At night, when the white lights of the towers glow at the KL skyline, another figure emerges—the KL Tower, which is a TV antenna, and home to a revolving restaurant.

Me Say a Little Prayer for You

As Catholics away from our home during holy week observance, we stopped for a visit at St. John’s Cathedral. It’s an old 19th century church but its architecture, though typical of many Catholic churches, is still very modern. Surrounding the church is St. John’s Institute run by the La Sallian brothers. I paused and thanked the Lord for the wonderful blessing of being able to visit KL, to know their people more, and to reconnect with our Malay brothers and sisters.

The interiors of the Catholic Church.

We left KL at 7:00am dawn. The sun was slowly rising and the fog that covers KL slowly faded before my eyes. Our time in KL was short but sweet. Yet, we have seen, tasted, and enjoyed the best things this city can offer. There are still many areas which remain to be explored but I consider them an invitation for a return ticket to KL. Selamat tinggal!

The tower can be seen from the church.