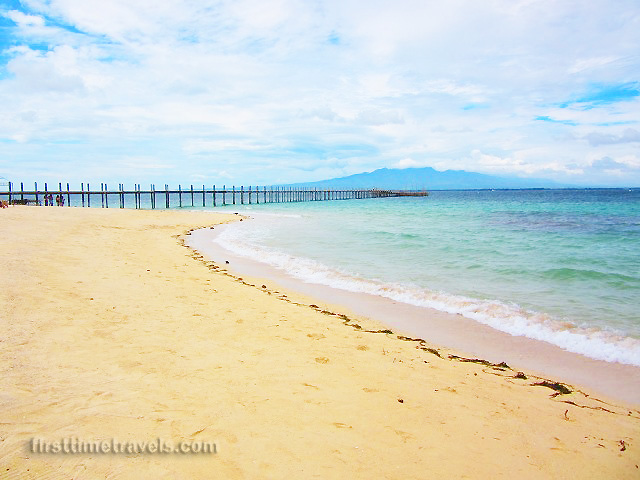 I have heard Lakawon Island when I was a teen but haven’t been to that part of my province, Negros Occidental. A year after I moved back to my hometown, Lakawon Island was again making the whispers among my fellow travel enthusiasts. In fact, it was featured on national TV at the “Kapuso Mo, Jessica Soho” magazine show a few days after our visit there.

Lakawon Island, as seen from the port in Cadiz.

Lakawon Island is located north of Negros. The jump off point is Cadiz City. Only 13 hectares in land area, this banana-shaped island, with its white sand beach, seclusion and privacy, has captured the attention of a number of tourists. Currently, it is undergoing development and improvements under a new management to better serve more beach lovers.

Cottages at the other side of the island.

When my friends Alissa and Loida scheduled their vacation in Bacolod, I planned a day trip to Lakawon with them. I was a bit apprehensive because it was raining hard days before they arrived. Plus, I didn’t want to drive there as I wasn’t familiar of the place, so I told them that we would just commute going to the island resort.

At around 6:00 to 6:30am, we met up at the new Ceres North Terminal in Bata. Every 15 to 20 minutes or so, a small Ceres bus leaves for Minapasok, which pass through Cadiz. As soon as the three of us were complete, we boarded the bus bound for Minapasok, but not before we had some noodles for breakfast at the terminal.

The map at the Ceres Bus North Terminal.

It was a non-aircon bus so we settled by the window. I could feel my adrenaline rushing as our bus moved out from the terminal towards the highway. The bus conductor approached us to ask where we would get off. I initially said “Cadiz” but immediately added “to Lakawon Island”. The conductor was nice enough to tell us that we should get off at Martesan in Brgy. Burgos, Cadiz City, which is before the city proper. I told him to inform us once we are at the right stop and we paid the Php65 per passenger fare.

The travel was a little over an hour. The breeze was cool and lulled us to sleep. The bus went through the cities of Talisay, Silay, and Victorias, and entered the town of Manapla. As soon as we crossed the border of Manapla and Cadiz, we readied ourselves. The bus went through what seemed like a driveway in front of a small bus terminal. The conductor told us that it was already Martesan, our stop.

We went down and approached an area where tricycles were parked. We told them we needed to get to the port where boats bound for Lakawon Island ply. Each passenger costs Php20 but since we wanted our tricycle to leave immediately, it would be a special trip, which was Php50 per passenger.

The long road to the port.

The view on the way to the port.

The tricycle ride was quite long. We went through a narrow road, some paved, some are not, through sugarcane fields and fish ponds, until we reached the port. A small office functions as a ticketing office of the Lakawon Island Resort and Spa. You can also stay overnight in the island but we preferred to just spend a day there.

Certain fees have to be paid at the ticketing office, such as the entrance fee of Php100 a person, terminal fee of Php20 a person, and the boat fees. There are two options for the boat: one, you can ride with other groups and pay Php150 per person for a roundtrip ride (last trip from the island is at 5pm. Otherwise, you will be charged overnight fees); or, occupy a whole boat at Php1,000 (good for 1-4 persons), Php 1,200 (good for 5-7 persons), or Php1,500 (good for 8-10 persons). We opted to pay the Php150 per person and waited for our boat. The thing is, the wait was over an hour. There was no boat available at the pier at that time because the prior trip has already left.

Fees to pay when going to Lakawon Island.

Trip to the island is about 20 minutes. Eventually, our boat arrived. It was huge as it could accommodate about 80 people. And as by Marina ruling, we had to wear our life jackets the entire trip.

The sun was up at that time and the breeze was good, a great weather for a swim. Eventually, the long pier of Lakawon Island came into view. We could see some men still working to certain portions of the pier. As soon a we docked, I excitedly descended from the wooden plank into the white sand beach.

My feet are ready to take a dip.

We went to the office near the octagon-shaped structure to check our reservations. I already called ahead of time to reserve an umbrella hut, which costs Php600, good for 1-6 persons (additional Php100 per extra person).  And, yes, we were on umbrella hut no. 1, near the shore. There was a deposit of Php500 to be paid at the office and can be claimed when you leave the island.

The white tower is where the office in the island is located. Our umbrella hut is at the leftmost part.

View of the Lakawon Island pier from the octagon-shaped structure.

Right by the beach there were four cottages that are in the sea. Yes, these cottages get submerged as the tide goes high. But it was fun to stay in these huts in the sea because we got to swim with a roof over our heads. And there were benches, too, where we could sat on it while the waves crash on us. It was a fun swim. Plus, we were able to doze off inside our umbrella hut, with the fresh wind rocking us to sleep.

The cottage in the sea. This wooden shed has benches where you can sit and submerge yourself while the waves rock you.

Since there were only three of us, we opted not to bring any food. Some groups had spaghetti, coolers, containers with viands, and lechon! We ordered at the restaurant in the island. The got milk fish and buttered garlic shrimp. The food wasn’t spectacular, but enough to fill us. We also got some frozen yoghurt. The service was quite well though as we could text the waiter what we wanted so that we didn’t have to walk to the restaurant for our additional orders.

The dining area of the restaurant, but we opted to have our food delivered in our umbrella hut where we had lunch.

The clean toilet in their restaurant.

I only hope that they provide an area where local fishermen can sell their fresh catch for guests to grill at the island. That will be a good community project where it is a win-win solution: it’s an attraction in the island, while it helps small fishermen in the area.

A secluded area at one end of the island.

Other structures in the island. There were lots of dragonflies there as well.

We wanted to get into Tawhai, a floating bar where you pay an entrance fee of Php200 that allows you a free boat ride to and from the island to the floating bar and a free drink. But the weather suddenly turned gloomy. A few hours after our lunch, the sky went dark and it started drizzling. The waves were also getting bigger. Good thing that we have already changed from our swim wear to our traveling clothes when the crew advised us that we should get back to mainland Negros.

A closer look of Tawhai.

It was a relaxing trip. Though we only spent less than a day at Lakawon, it seemed that we were fully recharged and rejuvenated. It wasn’t a stressful trip at all, despite the commute. The management of Lakawon continues to develop the island. Maybe when it’s fully operational and all its planned amenities are in place, I’ll come back to this place again. That’s for sure.

11 thoughts on “First-time in Lakawon Island”