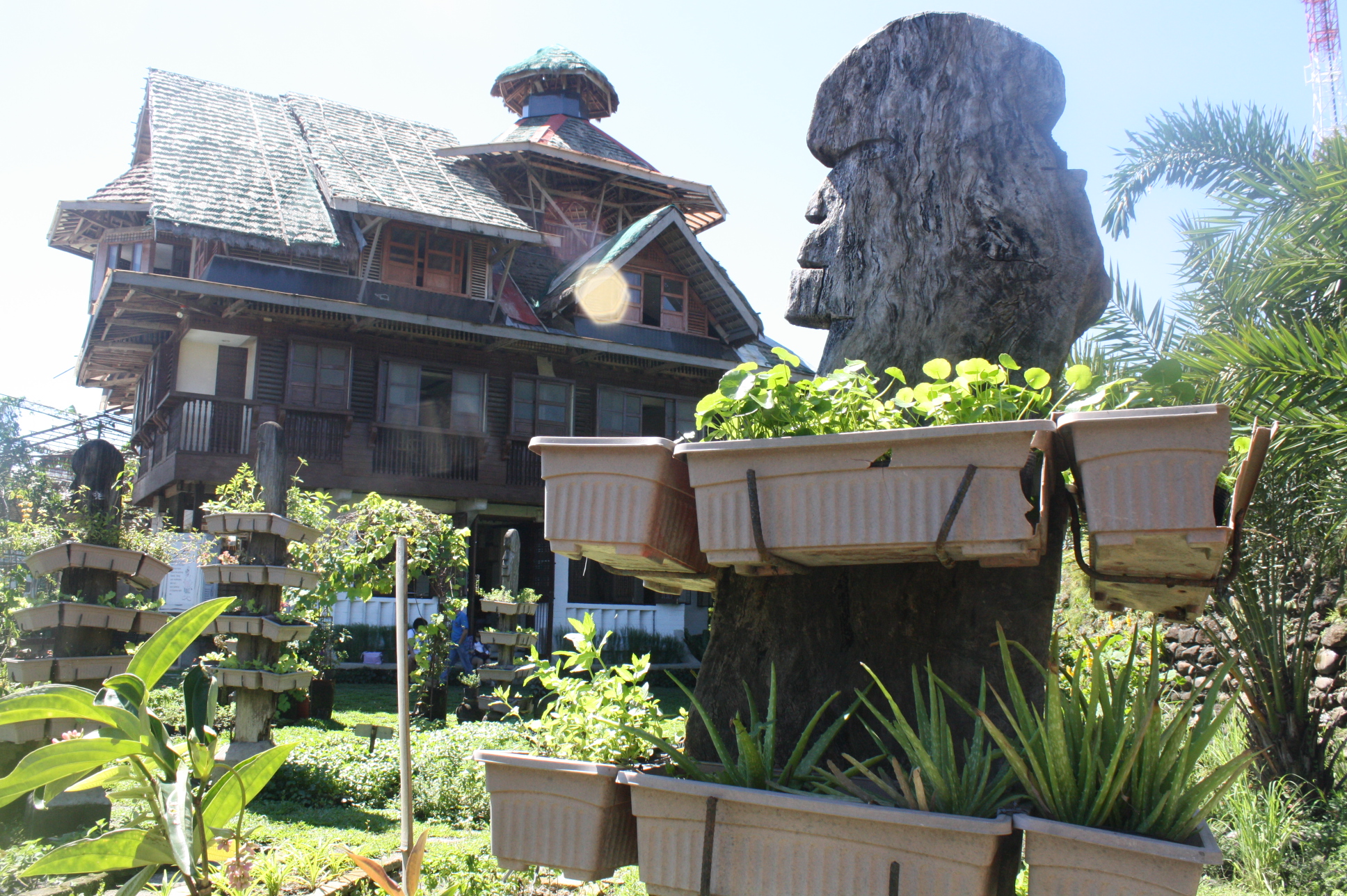 It was a bright sunny morning when we drove from Bacolod City in Negros Occidental, the Philippines to nearby Victorias City. There were six of us online media partners of the 9th Negros Organic Farmers Festival that were given this exciting farm tour sponsored by Peñalosa Farms, Fresh Start Organic Farm, Negros Occidental Tourism Center, and the Negros Occidental Provincial Government.

From the highway, our companion pointed to our destination – the Peñalosa Farms. The architecture of the building looked weird from afar. As we entered the red gate, columns and layers of plants were displayed on steel structures and the walls. Then the house came into view.

The Peñalosa Farms house, an identifiable landmark in Victorias City.

It looked like a burrow cottage set in a wonderland. Not your typical house, the lower portion seemed narrow and the middle part a bit wide while the top has a small tower. Up close, you’ll find that the design is that of a native Filipino house, with its capiz shell sliding windows and carved wooden elements. It looked like a fusion of a bahay-na-bato and a tribal hut in the uplands in the northern Philippines.

The house up close.

Beds of vegetable gardens could be found in front of the house. On one side was a steel structure with plants hanging from it. We entered the house and we were given our welcome drink – a five-leaf hot tea composed of pandan, lemon grass (tanglad), taheebo, gotokula, and gynura leaves with a touch of spearmint and calamansi. With one sip of the drink, I already anticipated a different kind of experience in this farm, one that would be full of healthy learnings, discovery and fun.

The five-leaf tea as a welcome drink.

A Negrense by choice, Mr Ramon Peñalosa, Jr., is the man behind the Peñalosa Farms.

The owner, Quezon-born Ramon Peñalosa, Jr., walked in the house and had us sit down. We chatted for hours, learning about the state of farming in the country and the province and his advocacies: to introduce farming as a way to becoming an agripreneur; to shift the idea of conventional farming into organic farming; to promote an integrated farming system where there is zero-wastage in a self-contained ecosystem; and to let people experience all these through farm tourism.

The vegetable garden in front of the house.

Chatting with the insightful Peñalosa, with his wit and humor, was a good foundation on how our almost half a day of the visit would unfold. He divided us into two groups and gave us different assignments. Our team focused on crops, would be to look for various plant species in his 4,000-square meter micro-model farm according to the usage and function that he gave us. But before “unleashing” us to roam freely inside his property, he first led us to the multi-purpose hall where Filipino folk music is played, then to Cafe Organic.

One of the private dining areas in Cafe Organic.

The cafe was like a floating structure, surrounded by water where different fishes were cultivated. In the cafe, Peñalosa’s wife, Grace, was waiting for us with our snacks – a vegetable salad, where we had a choice between a red onion vinegrette or honey mustard dressing, and a suman (a rice delicacy) with mango bits and caramel sauce. With it was a drink with blue flowers. Hmmm… interesting.

Our snack. Everything there is edible, including the flower.

At first bite of the salad, “interesting” was suddenly replaced with “delicious”, “impeccable”, “heavenly” and so much more. Grace added us some bits of wisdom about their philosophy in the farm. I liked it that the couple even shared with us some bible verses that have become their guide as they grow their business and run their farms.

Then, the activity began. We looked for Intal, who was to be our guide around the farm and help us with our assignments. She was very knowledgeable of every plant that we pass by along the way. There were several familiar plants that could be found in our backyard but I only learned of their uses through Manang (or big sister in Hiligaynon) Intal.

After listing all the plants for our assignment, we also visited the piggery and the chicken coops. It was amazing how they kept the animals healthy and clean, without a stench that are common in most animal farms.

As soon as we scoured the entire lot, we were invited to see the interiors of the house. There were rooms for guests. There were a twin bedroom and a dormitory. All in all, the house could accommodate 60 people to stay for the night. I climbed three sets of steps and at the fourth-level, the topmost was a tower that offered a 360-degree bird’s eye view of the entire property. Plus, there was a tiny chapel there, which is ideal for meditation.

View from the tower.

The chapel at the tower.

View from the second floor.

I felt the wind gushed through my face as I looked at the colorful windmill and the vegetable gardens below. I would like to experience spending the night in this place. I hope to bring my friends here someday and encourage my readers to visit Peñalosa Farms. I’m sure, you would be delighted to experience farm tourism, the Peñalosa way, and bring home not just loads of fresh, organic produce but also loads of insights that will inspire you to be an agripreneur like them.

P.S. By the way, Mr Peñalosa will show you how to earn seven to eight figures (in Philippine pesos) in net income per hectare.

To know more about the place and to make appointments, check the signage at the gate.

3 thoughts on “First-time in Peñalosa Farms”