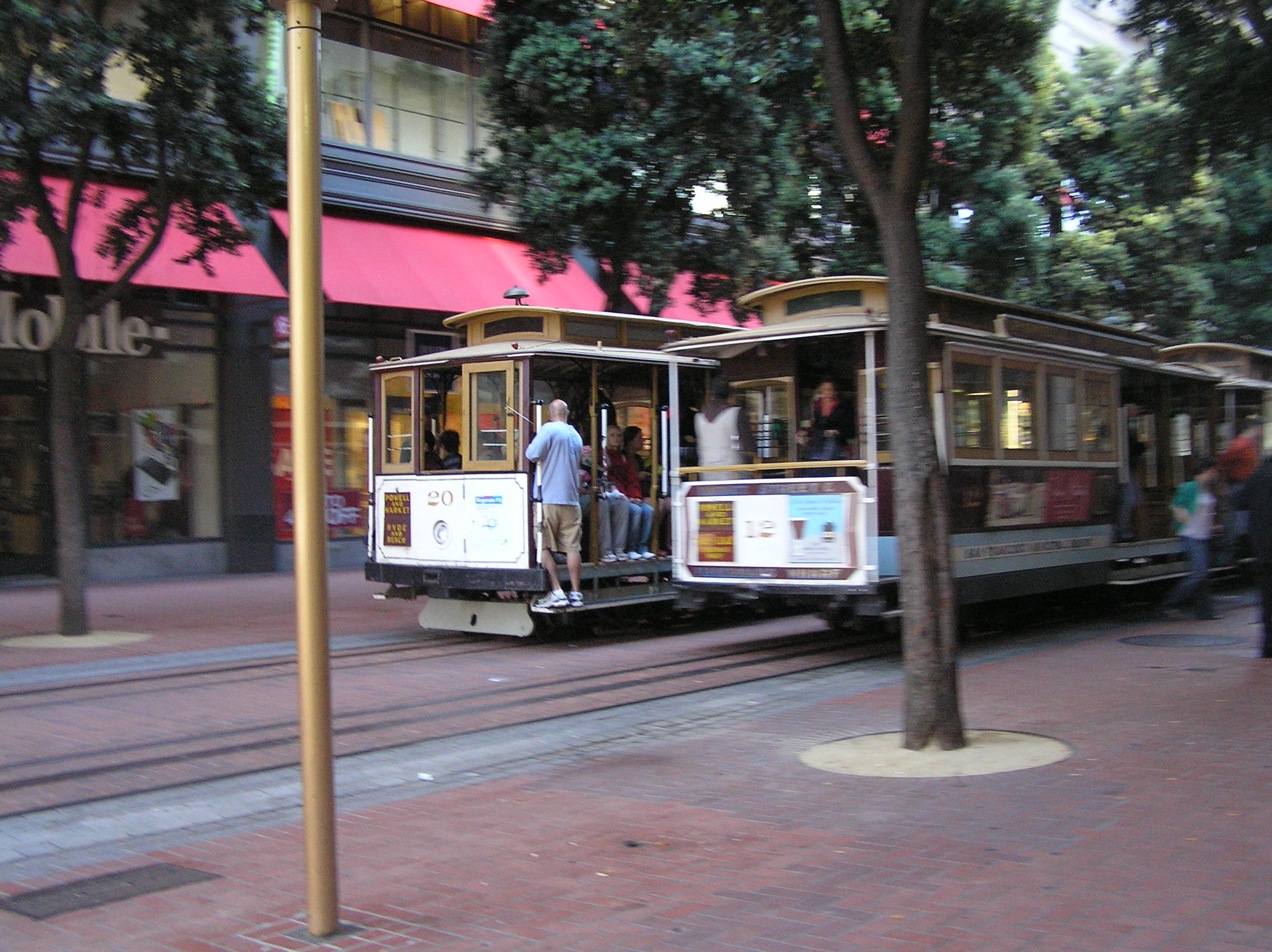 I went to the US to attend the 2009 National Conference on Volunteering and Service as a representative of Hands On Manila Foundation, an international affiliate of Hands On Network, powered by the Points of Light Foundation in the US. It was a big shot event opened by no less than First Lady Michelle Obama. (READ: NCVS 2009 with Michelle Obama and Some Hollywood Stars) So, there I was in San Francisco, coming all the way from the Philippines by myself although joined at the conference by our board members. We all just met up at Moscone West, the conference venue.

Through its narrow streets and uphill neighborhoods, the peninsula of San Francisco offers so many interesting tourist spots. Riding the cable car was quite an experience. Seeing with my own eyes what I used to view on TV or in magazines was awesome. Add to that the different feel of the cool San Francisco breeze, the smell of fresh leaves, and the sound of the bay’s waves and of nature – they were all quite an experience!

I roamed San Francisco by foot but I also had various opportunities to see its famous landmarks. First, a bus ferried us from Moscone West, located in the South of Market but near the downtown area, to Fort Mason for the Cheers to YOU party. Then, I joined an immersion program in the Presidio which also took us through San Francisco’s streets. Of course, we went around the city before proceeding to our destination. I met up as well with my childhood classmate, also named Claire, who indulged me in riding the cable car all the way to the Fisherman’s Wharf. Lastly, on my way back to San Francisco from LA, a bus pick-up from the Amtrak station in Emeryville took us through the Bay Bridge, around the Financial District, the Embarcadero, and in various drop-off points.

San Francisco’s layout is easy to understand. The northern part is where the Fisherman’s Wharf, Marina, the Presidio, Russian Hill, Telegraph Hill, Cow Hollow, and the Golden Gate Bridge are found. At the central area are the Civic Center, Chinatown, Japantown, Financial District, Union Square, and Tenderloin. Cutting right in the middle is Market St. It’s right smack in the Shopping District. On the southern part is the South of Market (SOMA), Yerba Buena, Castro, and all the way to Daly City and the international airport.

Golden Gate and The Presidio

The Golden Gate can be seen from the Presidio.

Part of the Presidio is the Crissy Field, a marshland that is now converted into a park where various plant and animal species grow. The Presidio also provides a beautiful view of the Golden Gate Bridge, Alcatraz, and San Francisco Bay. People bike and jog around the area, often flying kites or watching sails at the bay. Just near the Presidio is the Palace of Fine Arts which is also another tourist spot.

How fortunate I was to be able to join this immersion learning program. So excited was I for this activity that I was the first in line at the bus pick-up point. Even I was the only one from an international affiliate on that bus, I didn’t mind. I was just delighted to join the whole contingent off to the Presidio. I learned a lot and experienced the beauty of their national park firsthand. It was the best session I’ve ever attended. And before we left Crissy Field, we were given goody bags which included a flash drive containing all information about the program as well as souvenir items like a collection of postcards!

The bay and the Golden Gate bridge.

I was billetted at Hilton San Francisco, right at the city’s downtown, which is also within the Tenderloin area, known for its number of homeless people and a place that should be avoided. I witnessed it first hand since the night I arrived until the day I left for LA. One homeless man followed me and my friends from the cable car all the way to O’Farrell St.

Every block seems to have a Starbucks while parking buildings are scattered everywhere. Two blocks from Hilton, which is located along O’Farrell St., is Macy’s, San Francisco Shopping Center, and several other stores. It was summer sale when I was there and I found brands like Old Navy, Gap, and FCUK selling their goods at discounted prices.

Restaurants of various kinds of cuisine can be found anywhere in the downtown area. There are Japanese, Italian, Indian, Thai, and American restaurants. You name it, they have it. I tried one Indian food outlet just across Hilton and found their food very delectable. Friends from our mother organization also took us to Farmerbrown, a restaurant offering soul food, which is more commonly found in southern states. Farmerbrown, although offering American food, definitely has character and far different from usual fastfood joints that the US is known for.

The Financial District skyline is distinguishable because of the famous Transamerica Pyramid. Not only is it the tallest building in San Francisco but it is also the most unique because of its triangular shape.

Also located in the downtown area is the Civic Center that includes the city hall, museums, theaters, and the main public library.

The conference venue is located at Moscone West, which is part of South of Market. It’s a short walk from Hilton, passing through Powell St. and the San Francisco Shopping Centre, which houses Bloomingdale’s.

Moscone West was surrounded by Metreon, Yerba Buena Garden, The San Francisco Chronicle, City College of San Francisco, California Academy of Science, and Jollibee. Yes, the historic Filipino fastfood chain has landed on this side of San Francisco.

The Fisherman’s Wharf is frequented not only because of its many attractions but also because of known restaurants and cheap boutiques. Visitors go to the famous Boudin bakery where they find various kinds of bread made in different forms and shapes.

We dined at the Rainforest Cafe that has a souvenir shop on the ground floor. The restaurant truly has a rainforest feel with life-size robotic elephants, starlit ceiling, and fountain which has Atlas carrying the globe on his shoulders. On the walls were aquariums that housed different kinds of fishes.

The sun was still up at 8:00 pm and may be confused for a 5:00 late afternoon. But the breeze says otherwise. The cold air at night lets you forget of summer. Thus, wearing clothes in layers is a wise move whenever you are in San Francisco.

A never-to-be-missed spot in the wharf is the Ghirardelli Square which is famous for its chocolates. You can even view how they make these chocolates and enjoy the delectable sweets right there at its plaza or in the confines of its restaurant.

Near the Fisherman’s Wharf is Fort Mason where we had our opening party. Also popular near the wharf is Pier 39 where the Aquarium of the Bay is located. Sea lions found a hangout place at Pier 39, and have become an attraction to tourists.

Around San Francisco via the cable car

One should never miss the cable car while in San Francisco. These famous trams have been around for many years. We took the tram from end to end of Powell St. to Hyde St. It passes through the downtown area, Union Square, Chinatown, and Lombard Street, giving a magnificent view of San Francisco’s narrow, steep streets and the financial district’s skyline. It also gives passengers a view of Coit Tower, the crooked street at Lombard, and Alcatraz.

Down there is the winding road and on the horizon is Alcatraz.

In addition to other sights of San Francisco, the city also has the Castro, which is an area for gays and lesbians. Last June 27 and 28, a gay pride parade was held at the city.

San Francisco also has biking tours and sightseeing tours. Others take a wine tour at nearby Napa Valley across the bay. If I had time, I could have also visited neighboring cities and counties. Still, I feel content for having seen as much as there is to see in San Francisco.

Other blog posts that are part of this trip are:

2 thoughts on “First-time in San Francisco”