First-time in the Sto. Nino Shrine and Heritage Museum 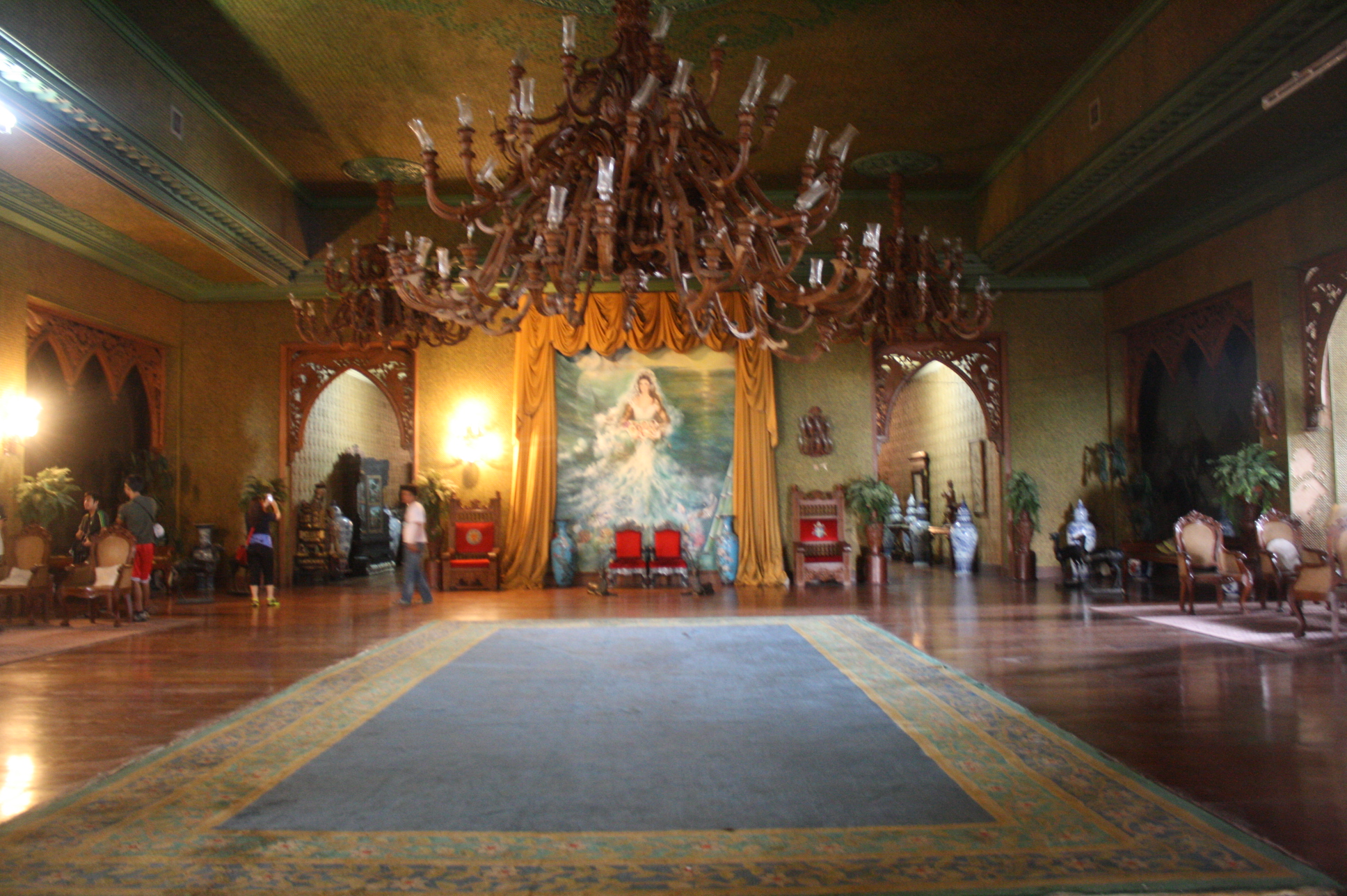 The Sto. Nino Shrine and Heritage Museum, located at Tacloban’s Real Street, is one of the city’s jewels that houses the antiques and valuable collections of the Marcos family. It is also situated in one of the badly hit areas by typhoon Yolanda.

The facade of the Sto. Nino shrine and heritage museum.

The signage at the entrance.

Almost lifeless palm trees surrounding the building showed the remnants of the devastation that the museum withstood from Yolanda’s wrath. On December 8, 2013, after recovering from the damages of the super typhoon the museum re-opened to the public, another proof of the resilience of the people of Tacloban.

Entering its doors leads you straight to a chapel.

Open from 8am to 4pm, we visited the museum at 10am, our last stop before we were to leave the city. At the entrance, we paid a fee of P200 for a group of 5 persons and an additional P20 per person, plus the P30 charge for the use of camera.

The group pose at the chapel before the guided tour.

Upon entering its huge doors, we found ourselves in a chapel. At the end of it is an altar with an image of the Sto. Nino, or the holy child Jesus, enshrined in a circular wooden frame. It is said that the image “walked” towards the door when Yolanda struck.

Intricate patterns and products used for the walls and ceilings.

A diorama of Imelda’s life is found in each room.

The walls are made of intricate woven wood product. Surrounding the chapel are elevated areas which have about five rooms on both sides. Each room has a theme, complete with a bathroom, individual photos of former Ferdinand Marcos and his first lady, as well as a diorama on the life of Imelda.

This is the shell room.

The beds, furniture, and decorations would vary depending on the room’s theme — Palawan, coconut, shell, Muslim, Bicolnon, capiz, etc. Along the hallway has paintings of the stations of the cross and a giant mosaic artwork of Jesus on one side and of Mary at the other side.

Larger than life mosaic of the risen Christ.

Photos of Ferdinand Marcos and of Imelda Marcos are displayed in each room.

At the end of the hallway, behind the chapel, is a huge living room with dramatic ceiling lights and a fountain made of shells at the center. It leads to a dining room that has a very long table that can host a state dinner. The room’s ceiling has an intricate mosaic of floral design.

The living room with a fountain made of shell at the center and a ceiling with light patterns.

Between the chapel and the living room is a large staircase with a big Egyptian mirror at the bottom. At the first landing hung the painting of Imelda’s family tree.

The second floor ushers to an expansive ballroom with artistic, huge chandeliers that are one-of-a-kind. Everything in this shrine seems to be huge and larger than life, indicative of the life that the Marcoses once lived. The shrine and museum used to be one of the presidential rest houses during their time, although the family has never really lived here. It is said that Marcos had this built for his wife, who is a daughter of Tacloban.

Stained glass windows and artworks abound in this museum.

The rooms on the second floor are bigger and more opulent. Imelda’s room is the most luxurious of all. Apart from the canopy bed, its bathroom has a jacuzzi, walk-in closet, a canopied shower, and a sink where Imelda can have her hair washed.

Since it is a Sto. Nino Shrine, there are also various religious icons displayed everywhere. The museum gave us a glimpse of the extravagant life of the Marcos regime. Decades after, such extravagance is the exact opposite of the scene beyond its walls as many families were left homeless by the super typhoon. Yet, we are hopeful that Tacloban will rise again soon.

3 thoughts on “First-time in the Sto. Nino Shrine and Heritage Museum”