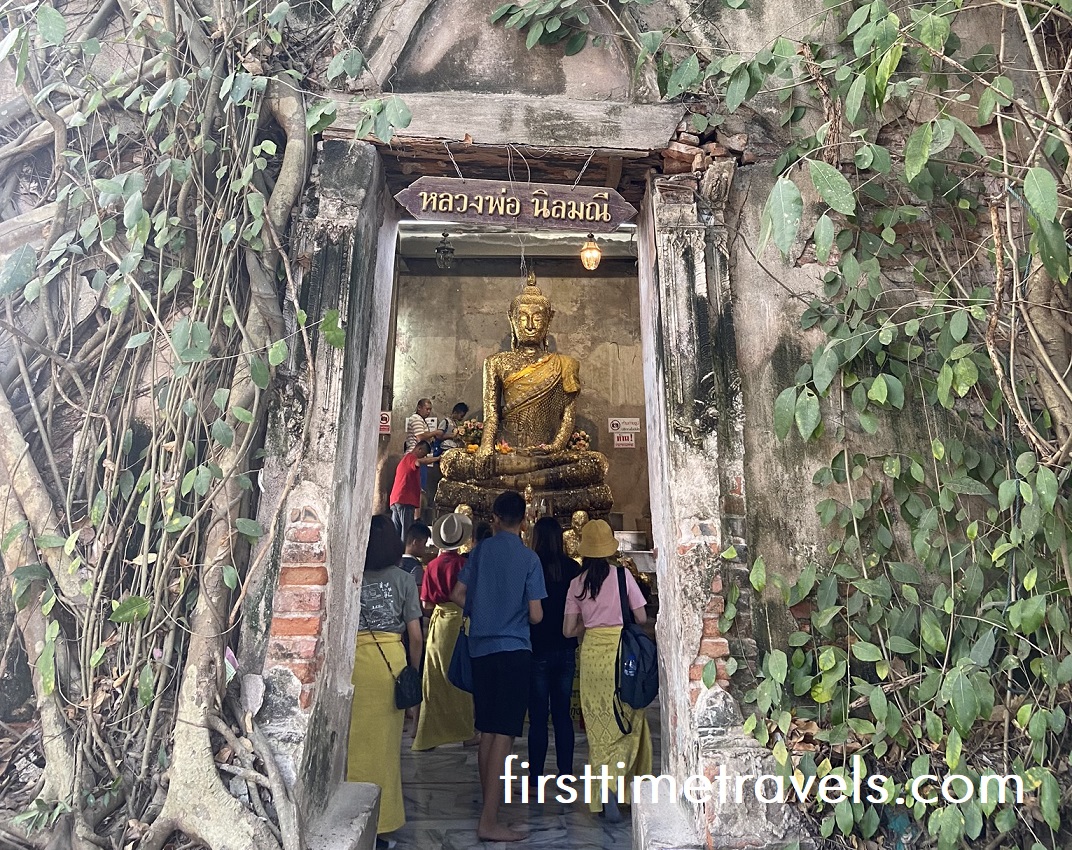 As our bus entered the compound of the wat, rows of men in various fighting positions filled both sides of the road at the entryway of the temple. And when I thought it was an ordinary temple like the ones I have previously visited, it turned out that Wat Bang Kung or the Thai Boxing Temple in Amphawa, Samut Songkhram in Thailand.

Wat Bang Kung has been around since the Ayutthaya kingdom. The small temple served as a spiritual center for soldiers at this naval fort near the Mae Khlong River. The Siamese army in Bang Kung, led by then General Taksin who later became King Taksin of the Thonburi Kingdom, fought with the Burmese forces and the area was part of the battleground. The Burmese then withdrew in 1768. After the war when General Taksin and his troops left the camp, Banyan trees flourished in the area and consumed the tiny temple at Bang Kung. In 1967, as part of the bicentennial celebrations, the site was restored by the Thai government and statues of King Taksin and the soldiers were put up in the area.

Getting to Wat Bang Kung

Private tours. Wat Bang Kung is often part of a private tour to the Maeklong Railway Market and Amphawa Floating Market. There are many travel agencies and online booking sites that provide private tours to this destination.

Commute. In Bangkok, go to the Bang Bamru Railway Station and take the train going to Ratchaburi, where you can hail a cab that can bring you to the temple. Another method is to take the train from Wongwian Yai Station and transfer at the Maha Chai Station/Samut Sakhon for a bus bound for Samut Songkhram, where you can get a taxi to Wat Bang Kung.   If you want to take the bus, you can either take one from the Bangkok Mochit New Van Terminal to the Amphawa Floating Market or from the Bangkok Southern Bus Terminal to Damnoen Saduak, then proceed by taking a cab to Wat Bang Kung.

Muay Thai figures. Male figures in pairs, bare chest and with blue short pants, are lined up on both sides of the small street inside the compound. Apparently, these statues were exhibiting the different Muay Thai positions. Thai boxing is part of Thai history and culture that has played a crucial role in the Burmese-Siamese War.

General Taksin and the roosters. There were a few statues on site but the one that caught my attention was the huge building with the statue of a sitting General Taksin with his sword on his lap, which seemed to be looking over a veranda. In front of him were statues of roosters of various sizes. I think our guide mentioned about him and his interest in cockfighting.

The temple beneath the tree. My sister and I almost missed this temple. It looked inconspicuous, except that our companions from the tour were heading there one by one. I spotted a statue underneath the huge tree and approached it to take a snapshot. That’s when I realised that the tiny block of concrete beneath the tree was the temple itself. We entered the small chamber and some devotees were heading to the elevated area at the sides of the Buddha to put the gold leaves and pay their respects.

Mini-zoo. After visiting the temple, we decided to head to the parking area and wait there near the bus for the others in the group. It was then that I saw a family feeding the horses by the stable. I went near them to take a closer look at the horses. There are other animals in the zoo but I never got around to explore and look at them.

Wat Bang Kung is an interesting place. I didn’t know that it has played a significant part in Thai history. But the roots of the Banyan tree kept it alive, not covering it; and instead, giving testament to the role of the spiritual center in the Bang Kung camp.