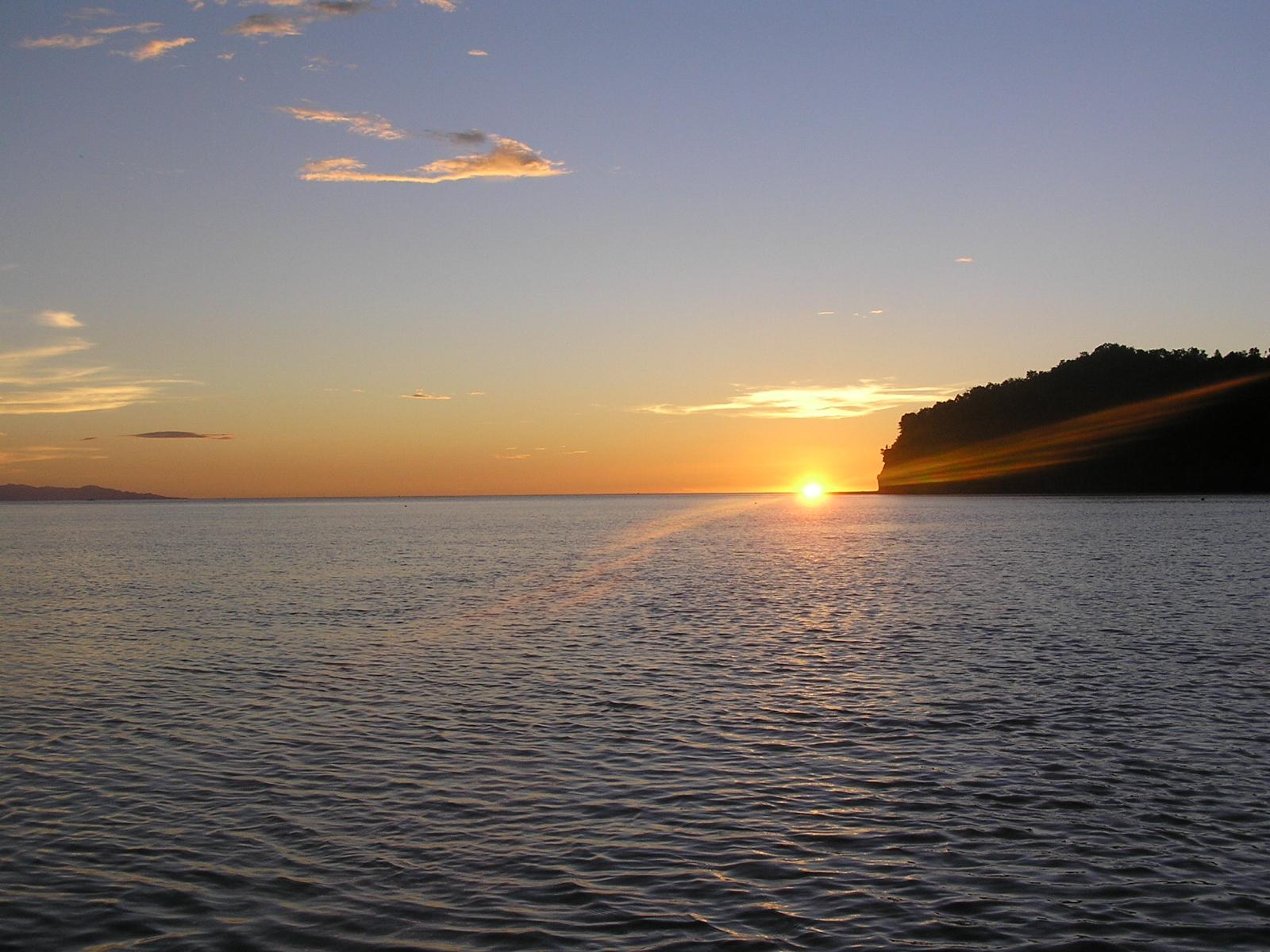 Zamboanga del Norte is in the island of Mindanao, the second largest island in the Philippines. And when one mentions Mindanao, tourists suddenly cringe and take a turnabout-face, especially when travel advisories label this part of the country as dangerous. The name Zamboanga alone may cause goose bumps to travelers. Scary is the exact opposite of Zamboanga del Norte, particularly its twin cities of Dipolog and Dapitan.

We landed at the Dipolog airport.

Both cities face the Visayas region, the central part of the archipelago. Dapitan is where our national hero, Jose Rizal, lived in exile for sometime.

Last month, my friends went to Dipolog and Dapitan, to the beach resort of Dakak, for a weekend getaway to celebrate the birthday of one of their companions. I instantly declined, having visited Dakak Resort just more than a year ago, since I prefer to go to someplace I’ve never been before, or where I haven’t been to for a long time.

The beach front in Dakak.

Our trip was still vivid in my mind. There were three of us who flew to Dipolog. As soon as our plane landed, we were met and welcomed by a resort representative. Along with other tourists, we boarded a van and went on our way to Dapitan City, which was 30 to 45 minutes away. We asked our welcome party if we could tour both cities on our own, without hiring a van from the resort. He cautioned us that it would be difficult. Not only was the resort secluded but the only means of transport from the gate would be a tricycle or a habal-habal, which is a motorcycle. We confidently told him we could make do with any of the two, and our host only shrugged.

We passed by this family on a motorbike along the way.

As we moved out of busy Dipolog, passing by rivers and mountains, we arrived in quiet Dapitan. The road leading to the resort was undergoing improvements and the red soil was creating a cloud of dust everywhere. Realizing how we would look like if we do our tour on an open-space two-wheeled or three-wheeled vehicle, we burst out laughing.  Feeling resigned, we decided to rent the van the next day to take us around interesting places.

From the resort’s gate, it was still a long ride. We passed by some of its amenities until we arrived at the resort lobby. We had our welcome drinks of orange juice and we immediately took our lunch.

The dining area was an open veranda that gave us a majestic view of the beach. The cove was covered with white sand and the sea was very still. I immediately took out my camera and snapped away. Excited about the inviting waters, we devoured our lunch so we could go to our room and put our bags away.

One of the facilities in the resort.

The bell boy helped us with our bags and led us to our cottage. From the lobby and the dining area, we walked beside a swimming pool with cascading falls, went over a bridge with fresh orchids, passed by a boat-shaped restaurant and conference hall, towards another pool, and through a man-made mini-cave that led to a narrow path lined up with torches and trees on the side, and climbed several steps before we found our room. There were also several cottages clustered around our area arranged in an amphitheater style.

Our cottage has a terrace with two lazy boy-like chairs made of wood. Inside were soft beds, rattan sofa and couch, a TV set, and a long side table. There was an inner room with a refrigerator and a wide area for changing. It has a sink, a dresser, and mirror. On one side of the inner room were a shower area and a toilet. The cottage was big enough for the three of us. Moreso, it was extremely comfortable.

Time seemed to stand still in this place and the sun kept on shining while the wind and the birds lulled us to sleep. All about swimming was forgotten. We woke up and the sun was still up. Not wanting to waste such beautiful afternoon, we walked around the resort. In one of the winding and intersecting roads, we saw a signage called “The Repeater” with an arrow pointing to a series of steps.

The Repeater is the 300 steps leading to the top of a hill that overlooked the entire resort. It was not an easy climb. At some point, we had to stop to catch our breath and wonder at the beauty before us. We saw the view at the other side of the cove, with a small island at the center. Finally, we made it to the top, but not before going over the slippery part of the climb. Now, we were facing the resort and the whole cove in view. It was majestic, especially with the sun slowly descending at the horizon.

View of the beach from the hilltop.

After our climb, we tried to look for the chapel within the resort. We had to go through various clusters of cottages, almost got lost at the tennis court and basketball court, before we made it to the chapel. It was tiny, made of large stones and bricks. It was so serene inside. The chirping of the birds and the sounds of insects and swaying branches provided background music as we paused for a reflection.

Later that night, all the resorts’ occupants were gathered at the dining area and we were entertained to a night of Philippine dances while we enjoyed our dinner. I was surprised that the veranda was full since we only saw a few people around the resort during the day. Probably, most of them were just inside their rooms or maybe the resort was that big we didn’t see many people hanging around.

The tiny chapel inside the resort.

It was easy to lose track of time in Dakak. We slept through the night and woke up late. It was a good thing we still made it to the breakfast buffet.

We spent most of the second day outside the resort. We had to go through the road that was being constructed. Bulldozers and large equipment blocked some parts of the road. From inside the van, we saw locals aboard motorcycles effortlessly easing their way around the traffic. But it was crazy as we saw some motorcycles with four to five people riding them.

Our first stop was the shrine of Jose Rizal. At the gate, we were met by a boy of 12 with an old film camera hanging by his neck. He never introduced himself, but we found out later that his name was Ricky Boy. He was persistent in taking our photos but we declined since we brought a digital camera with us.

The statue of Rizal in Dapitan.

The classroom where Rizal taught.

Rizal’s house was made of wood elevated on stilts. It was spacious, built with good ventilation and a terrace around the house. Followers of Rizal, the Rizalistas—women wearing white dresses with long hair were guarding the house. Some of them had white veil on their head.

This is where Rizal lived.

A few steps uphill was a natural pool coming from the mountains. Rizal built a small dam to hold the water and act as a swimming pool. Little huts were seen at the other side of the tiny creek. It was Rizal’s hospital rooms where he operated his mother. The compound was interesting and educational, giving us a glimpse of the life our national hero lived. It was by the sea and I could tell that Rizal had a rich and well-spent life here.

We went next to the central part of the city of Dapitan. The streets were deserted. We passed by an old Spanish house so we decided to get inside the house and take a look. A caretaker was living there and she seemed used to having strangers climbing her house.

The town plaza of Dapitan.

A few blocks away were the main city square which consisted of a simple park with a relief map of Mindanao that was made by Rizal himself. Across was Dapitan’s St. James Church. What I liked about its interior was the swirling salmon-colored tiles on the ceiling and inner dome. After the church visit, the van rounded up a corner and we were already out of the city. It was so small; it was like a small village.

The beautiful ceiling inside the church.

We rode to Dipolog, which was busier, with more cars, pedestrians, and shops. We also visited some churches at Dipolog. The driver drove us to the boulevard that gave a view of the blue sky and sea.

Parched and hungry, we went out to look for a nice eatery. We read somewhere that we had to try Cafe Isabelle, which we laboriously looked until we located it in a residential area. Yet, our efforts paid off because the restaurant was not only neat and nice but also served pasta and delicious pastries. Some locals and tourists arrived and occupied the few tables around the coffee shop.

After having our fill, we had to buy some good food souvenirs to bring home to our family and friends. We passed by the market but found it too crowded. The driver, who must have been used to bringing resort guests around, brought us to Montaño’s Sardines. They were known for making homemade sardines and other bottled food products. It was good to try their products but it was difficult to bring so many because the bottles were heavy and fragile, especially when we had luggage to carry.

We had enough of the tour so we headed back to the resort and spent the rest of the day at the beach. We went for a swim and waded through the cool, undisturbed water. It was glorious to have the sea all to ourselves and only a few visitors.

Dinner was another round of entertainment. This time, the resort staff arranged the tables and brought them out to the beach. It was an amazing experience eating under a starry night, surrounded by torches and with the sea just a few steps away. The sand underneath our feet relaxed us as we enjoyed our food and watched the dancers perform our folk dances.

Getting ready for our dinner by the beach.

There were a lot of Caucasians around and they were thrilled to try the bamboo dance, a native Filipino and Malay dance. Again, the night seemed long and we spent most of it sleeping and most of the day snoozing. It was truly a relaxing vacation. No rush, no schedules, no extreme activities, no stress and pressure.

As we left the resort, the sky poured out rain and we were grateful that the sun was out during our stay. We bid Dakak goodbye refreshed and rejuvenated. Going back to the capital was like waking up from a deep slumber. And we were back to the traffic. I wished I would have stayed in Dakak for a few more days but it was time to move on.