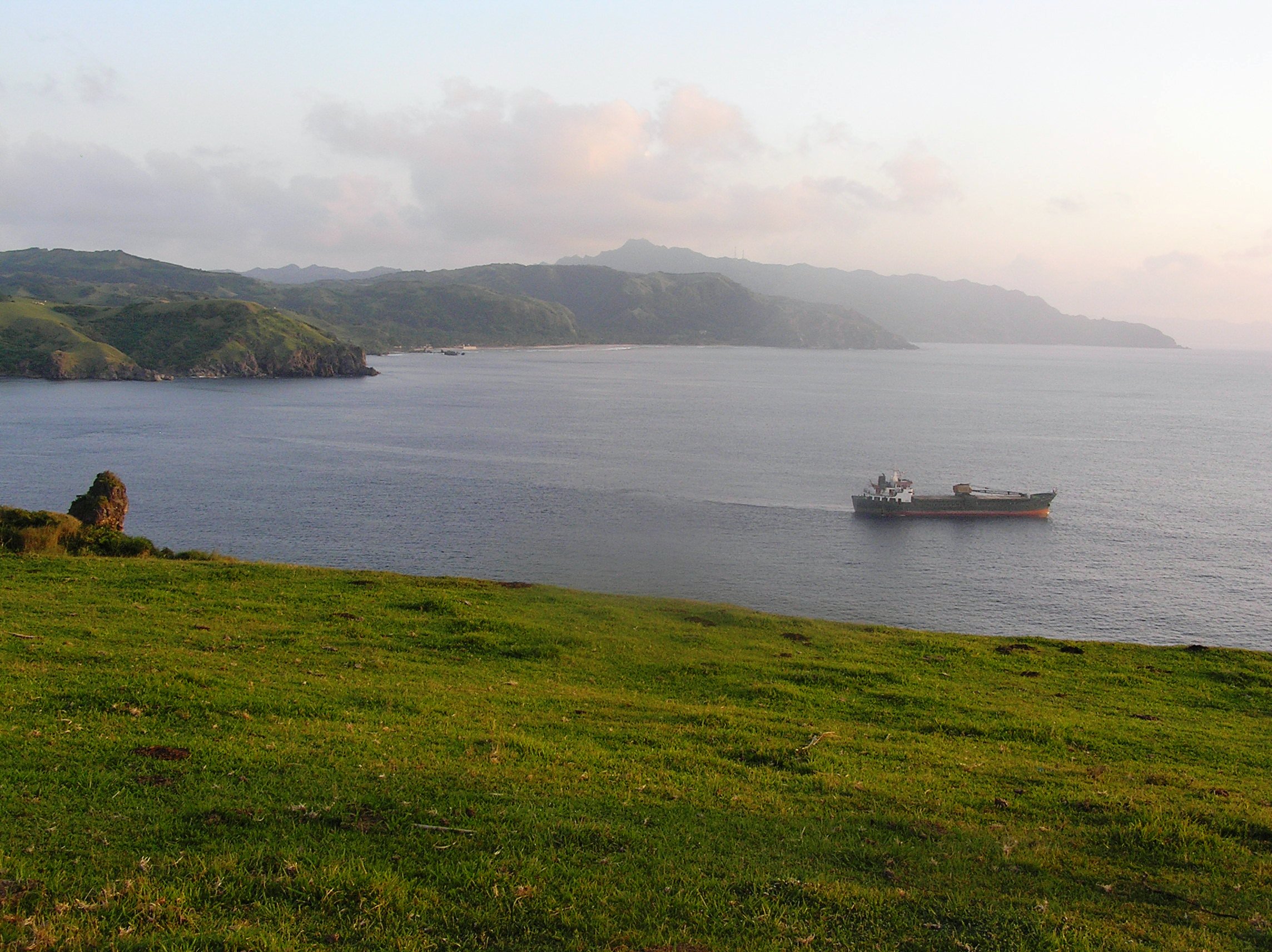 For years, I had my eyes set on the northernmost tip of the Philippines. It was a place that only few has conquered because of its isolation and unpredictable weather conditions. It was the closest place to Taiwan and surrounded by the South China Sea and the Pacific Ocean. This is Batanes.

I could count only with the number of my fingers how many times I haven’t researched about a destination I would be going to. This particular trip is one of them. I thought I’ve heard enough of Batanes that I wouldn’t need to check on the place. As each of us paid for the whole package, I left everything on the hands of our tour guide and the point person in our group.

View from the plane.

The cliffs of Batan Island, Batanes.

Here are some basic facts about Batanes, along with a few I learned during my trip. Its capital is Basco and the entire province has a population of over 17,000 people only. It is composed of 10 islets, including its three major islands—Batan, Sabtang, and Itbayat.

We left for Batanes at early dawn. We were at the airport while Manila was still dark to catch our 32-seater plane. Well, it was a not a trip without any glitch. One of our companions who made it to checking in time was not accepted because her seat was taken by a television crew. Not a good way to start the morning. We took our scheduled plane ride while Lissie got to the next flight, which was three hours later than ours. We assured her that we would meet her at our destination when she arrives.

After more than an hour in the air, I stirred from slumber and woke up with an amazing view of rugged mountain tips peeking through layers of clouds. Later, we touched down at Basco, the capital of the province of Batanes, which was a bit dark and overcast. To our dismay, two of our companions couldn’t find their checked-in baggage, only to be informed that their bags were placed at the next flight.

Resigned to our unlucky turn of fate, we rode our jeepney to proceed to Pension Ivatan where we would take our breakfast. The jeepney drove the driveway and as it exited the gate, it backed into a small alley. Count to five and viola, Pension Ivatan was there. We laughed at such funny scenario and took our hearty breakfast.

Pension Ivatan, just behind the airport.

The best part of our trip started right after we had our breakfast. Everything seemed to go well. Batan Island would be comparable to the islands of Hawaii, or the coast of Scotland, or the hills of New Zealand. Yet, Batanes has a unique soul that even Filipinos, like us, found mersmerizing.

A place of history

Batanes is a place full of history. We traveled south of Basco to visit one of the oldest houses in Ivana. The old lady who lives there, Florestita Estrella, said that she inherited the stone house from her grandparents. Now, she’s 84 years old and has become an icon in Batanes.

The view of the island from the lighthouse.

As we went around the island, we also visited old churches, like the San Jose de Ivana, which was built in 1795. When we visited the church, there was a mass going on and most of the locals were in attendance.

One of the chapels in the island.

Bicycles and motorcycles were parked outside the church. Right after the mass, the residents, men and women of all ages and station, went to their respective two-wheeled vehicles, which they use as their regular means of transport to get from one point to another within their tiny towns.

Not only are the old stone houses and churches reminders of the old Filipino way of life in this province, but there were also remnants of the American and Japanese occupation during World War II.

We entered a tunnel.

One of the places we visited was the Dipnaysupuan Japanese Tunnels. We braved the dark and went inside one of its tunnels which the Japanese used during their three-year stay in Batan Island. The passageways were large enough for people to stand and breathe normally.

The tunnels were too small and were used during WWII.

Traces of American occupation were found at the Naidi Hills where the Basco lighthouse is located and the old telegraph facilities of the Americans that connected the entire province during their time. Now, the Bunker Café serves tourists with food and beverage while they view the beautiful sunset and the whole Basco town.

One of the bunker structures left by the Americans was turned into a cafe.

The hills are alive at the sound of musical waves

Large forceful waves hit the rocky coastal area of Valugan Bay. People come by to feel the strong winds but no one would stay longer to brave the furious display of nature. Yet, the carabaos, cows, and goats, grazing the grassland nearby seem oblivious by the potent combination of water and wind. It was nice to just sit down on one of the rocks and be inspired from the scenic plateaus and the cloud-covered Mt. Iraya. We were fortunate to stay in the Valugan Bay Hometel of Pension Ivatan as we enjoyed this scenic beauty.

The boulder beach near our cottage.

But the Valugan Boulder Beach is just one of the “green” attractions of Batan Island. Our favorite was Rakuh-a-Payaman, or more popularly known as Marlboro Country, which was coined by a foreigner because of the many cows and goats grazing by its grassy hills. I could stay there for hours, just sitting by the hills and staring at the waves splashing at the shore by the horizon. The place was so serene I could sing the “Sound of Music” there.

The serene rolling hills of Batanes with a view of the cliffs and the sea.

The other place to be is the Rolling Hills in Vayang that shows the view of the open sea and the towering Mt. Iraya. But the hills were too steep they are not for the faint-hearted.

Through the zigzag roads, marked with “Blow Your Horn” signs, and around the island we saw hills everywhere. Another Batanes wonder was the Idjang, or the fortress found on top of the hills.

A natural pool found in one of the rocky areas.

Since Batanes is known for the typhoons that frequently visit the province, the Department of Science and Technology has a weather station within Basco.

There is a DOST facility in Batanes.

From the PAG-ASA weather station, we saw the lands divided by hedges, called the hedgerows, like a giant puzzle board. Our guide, Jack, told us that it was a form of farming in Batanes, to identify the boundaries of the land being tilled and also as a means of protection from animals and natural forces. Batanes is so known for its forceful weather conditions that it was no wonder that we experienced both rain and sun, and a lot of wind, during our four-day stay in Batanes.

I got up close the splashing waves when my friends and I went down the viewing deck that led us to large rocks with a natural swimming pool. The plateau was not to be trusted because the waves could easily topple us down.

When one thinks of art, the first person that comes to mind connected with Batanes was the late Pacita Abad. She was the one who painted one of the bridges of Singapore in 2004. But her home and gallery has now been transformed into a high-end hotel, called Fundacion Pacita. Right at the edge of a hill, it has a beautiful view of the ocean and surrounding areas. The hotel was built on large stones, like those found in European mountains, and a colorful display of Pacita’s artwork.

The pension house owned by the Abads.

Of course, the local headdress, called Vukal, is a unique identifier of the Ivatan tribe. They are hay, stacked like long hairs to protect them from the wind and rain.

For food, our host at Pension Ivatan pampered us with the local delicacies, including Durado, or the flying fish, and lobsters. We also enjoyed the local suman and glorified gabi, their delicious desserts. The Batanes vinegar and garlic were also great buys that we brought home to the capital.

And speaking of café, one place that has been gaining prestige in Batan Island is the Honesty Café at the town of Ivana. When we went to the café, there was no one manning the café. All products have price tags and customers had to list down their purchases on a notebook and place their payment in a jar.

Near the Honesty Café was the port of Ivana where boats to and from Sabtang dock. Right at the port I met Didong Labrador who makes the DY Native Ice Cream. He was on his mobile phone when I approached him (for orders, call his number 0939-8622120) and he informed me that he ran out of ice cream. It was a good thing that the next day we bumped into another ice cream vendor in front of the San Carlos Borromeo Church in Mahatao.

It’s not easy to describe our great adventure in Batan Island in just one article. And the experience of being there was nothing compared to the pictures I only saw at the internet. Finally, I could say that I have made it to Batanes, the northernmost point of the Philippines.

The breathtaking sunset in Batanes.