MassKara 2017 and its ASEAN theme 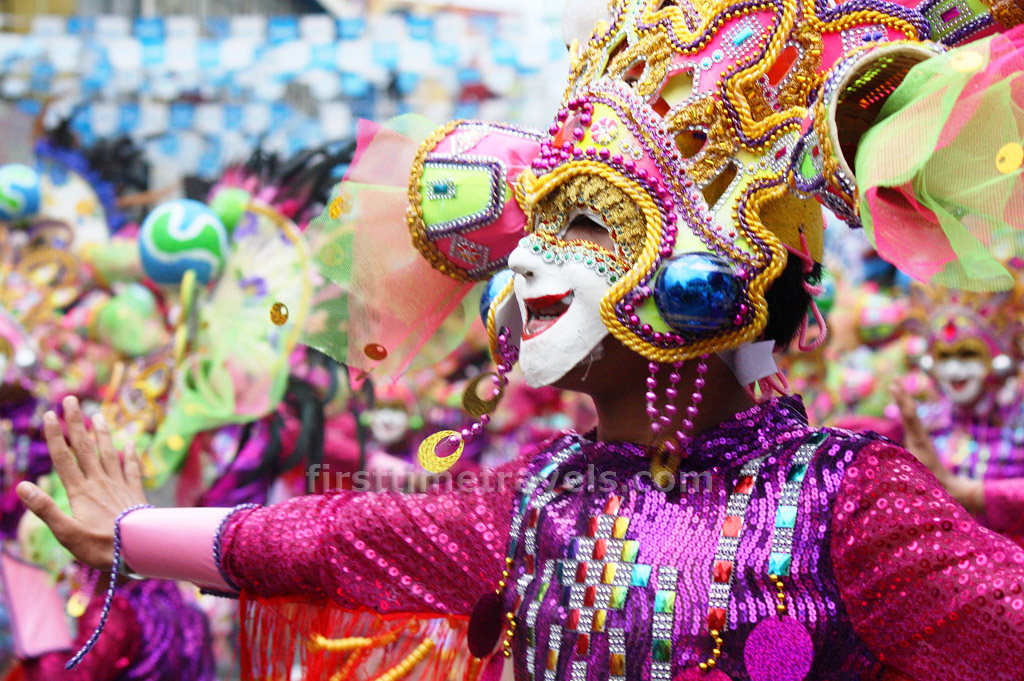 The MassKara Festival of Bacolod: City of Southeast Asia

The MassKara 2017 theme focuses on “Bacolod: City of Southeast Asia,” which highlights the local culture as part of the larger ASEAN heritage as well as a look to the future towards a stronger ASEAN integration. It is understandable why this is the theme for 2017 because this year marks the 50th anniversary of the Association of Southeast Asian Nations (ASEAN), to which the Philippines is part of and one of the founding members. Putting the ASEAN flavor into this local festivity is Bacolod’s move to bridge our roots towards the future, as well as incorporating the regional influence into our local attributes.

Street dancing is a major attraction during the MassKara Festival.

In my post 50 Things to See in ASEAN Countries I have listed down some interesting destinations found in the region, but there’s more to the attractions that meet the eye. It is in immersing ourselves and blending with the locals that we find the connections and similarities among the cultures within the ASEAN. My travels have opened my eyes to the Southeast Asian culture that binds us as an ethnicity. And while traveling has provided me with several answers and ideas, it also afforded me with openings for more questions to arise, particularly on our Filipino cultural identity that seems to be getting overshadowed by modernization and by our tendency to lean towards customs that come from the opposite side of the globe. In the process, I learn to appreciate localities that have retained remnants of their past. As I have roamed within the Philippines and around Asia, the more I see the value of the traditions, heritage and practices that they continue to preserve, maintaining their own identity, despite the shifting times.

Culture evolves, but there are fragments of our heritage that we still need to uphold so that we never lose our distinct Filipino characters with the changing tide. Also, culture drapes various aspects of our life and society – from performing arts to visual arts to gustatory flavors to architecture to literature to clothing to customs and so much more.

This got me thinking lately and MassKara’s focus on the ASEAN fiber of our culture has given me a bright idea ahead. I’m coming up with a series of blog posts called REVERVE — articles that will promote to REVive and presERVE our Filipino heritage.  I have heard of “reverve” before but couldn’t find an exact meaning, except something on Urban Dictionary that mentioned “A reverve is done when walking forward with a full approach, and not running.” Going back to our roots and sifting through the good ones that we need to maintain is something we need to do, not in a rush, but with deliberate consciousness.

As MassKara highlights our ASEAN roots, let us take a look at our Filipino culture and that of our Asian counterparts and how we can connect the dots.

Music plays an important role in shaping and evoking emotions, memories and ideas deep within us. It has been used as a tool in educating society as well as to establish connection with individuals.

I have particularly observed in Indonesia and Thailand, and even in India, which is part of South Asia, how they continue to incorporate elements of their local sounds from olden days to their pop music. I’m no music expert, but by just listening to the songs and dances, I can seem to quickly relate them with the place and the people. There are also Indo-Malay music that at first hearing reminded me of Filipino folk songs, especially those in the Visayas. For instance, gamelan, a traditional musical ensemble which I first heard when I was in college at the University of the Philippines, is widely used in Indonesia, where it came from.

This year’s MassKara music seems to have taken a different turn, unlike the Latin beats and the electric modern sounds from some of the past festival songs.  Roberto “Bob” Aves, a music artist who originates from Bacolod, composed and arranged the MassKara 2017 street dance music. Aves, known as the leading proponent of Philippine jazz, also co-produced this music with Gerry Grey, who did the previous MassKara festival music.

According to Aves, the music for this year’s festival fuses the traditional, modern and ASEAN cultures, in their quest to universalize our culture to create a global impact. The music has three parts. First, the introduction has a mix of ethnic sounds from our indigenous culture with the use of Palawan bamboo and gong counter rhythm, voice ad libs called “Tata” by Panay Bukidnon, Babandir gongs of Maguindanao, Tongatong (bamboo instruments) of Kalinga, and big Taiko drum accents from Japan (Asian). The second part is more for the actual street dance steps and it features our evolution “from tradition to global transformation” using Electronic Dance Music style and incorporating vocal tracks by Tim dela Rama, Jet Estefani, JoAnn Bernal, Christian Morales, and “Tata” from the Panay Bukidnon. “I have to point out that the indigenous styles we incorporated into the piece are true, culturally correct pieces. It was not a shot in the dark. These are the real instruments that they use, the real music that they use – that’s what I applied,” Aves stressed. The last portion has the ASEAN musical elements with the Maguindanao Kulintang excerpts, hip hop by Christian Morales, and Negros “Afro-Cuban” beats, then capping it with the main theme for street dancing.

Listen to this year’s MassKara Festival music through this link.

Music plays an important part in cultural heritage. This ensemble was taken at the Taman Mini Indonesia Indah.

The festival music brings a different vibe to the whole celebration.

The current music has a fusion of traditional, modern and ASEAN beats.

Masks used for performance is also something we share with our Asian brothers. In Indonesia, for example, especially in Javanese and Balinese cultures, they use topengs or masks for dances that portrays tales and myths, with gamelan music as accompaniment. When we visited the Indonesian museum in Taman Mini Indonesia Indah in Jakarta, we have seen walls of traditional masks, depicting gods, demons and characters in mythologies.

Korea and China have traditional masks as well, which I also saw in the museums in their palaces. Although I haven’t been to Japan, yet, kabuki is known for using masks; oftentimes, actors having their faces painted on. I have also witnessed this year in Kerala, India wherein performances are made using colorful make-up with some facial accessories, which overall appear like masks. Other characters wear masks in some folk performances.

The masks of Bacolod’s MassKara festival has a jolly and colorful appeal to it, exuding a positive vibe to counter the events that Bacolod had in the 80’s when it was going through challenging times (READ: Behind MassKara’s Smile). Some of these masks, done by local artists, are put on display during festival period. This year the 21st MassKara Village at the 2nd Level of Robinsons Place showcases 24 wearable masks that are mostly constructed from indigenous and recyclable materials. The MassKara Festival 2017 logo, designed by Bacolodnon and international-caliber digital artist Mark Lester Jarmin, shows this aspect of the festivity as it emphasizes the joyous vibe of our mask.

Twenty-four wearable masks made by local artists are on exhibit at the 21st MassKara Village of ABS-CBN Bacolod at the 2nd Level of Robinsons Place.*/ABS-CBN PHOTOS

A wall of masks at the Indonesian Museum in the Taman Mini Indonesia Indah.

Masks of Bacolod’s MassKara Festival are happy and colorful.

Whenever I visit a new place, I try to taste the local flavor, including their street food. Cuisines are not just products of the indigenous ingredients available in a particular area mixed together. It also signifies the preference of the locals when it comes to taste and culinary practices, many of which are handed down through generations.

Grilled skewers or barbecues are common throughout Asia. Satay is enjoyed in Singapore, Malaysia, Indonesia, Brunei, Thailand and other countries in the region. They may be beef, pork, chicken, fish, sea food or vegetables skewered by bamboo sticks. Recently, we enjoyed grilled shrimps and squid in Tangkil Island in Lampung, Sumatra, Indonesia.

Chicken inasal, or chicken barbecue, is the primary food you will find in most stalls in Bacolod’s public plaza, the Lacson Strip, or the area within the Bacolod City Government Center during the MassKara Festival. It has become a mainstay in the city and quite popular in the festival venues. In fact, Manokan Country is one of the must-go food joints in Bacolod.

Barbecued chicken and other skewered food are popular in Bacolod City.

I can go on and on with regards to our cultural similarities and the various aspects of our traditions that needs to be safeguarded. Definitely, we need to revive and preserve the most significant ones. It’s not just in Southeast Asia where I have seen initiatives and advocacy that long to preserve the local culture. My short visit in New Zealand exposed me to the efforts of its government and the people to protect their indigenous people, their architecture, their natural environment and their heritage.

My recent trip to Indonesia and last year to Brunei showed me how they endeavor to retain qualities of their trademark in terms of their architecture, clothing and food. Even Singapore has made practical use of old buildings, but still retained the integrity of the structures. Thailand actively puts forward its local culture, which has been constantly drawing international attention.

Personally, I feel that I can do my part by sharing the local traditions and cultures I have seen and experienced through my travels, in the hope of supporting ASEAN’s goals in reinforcing our cultural heritage. At some point, I have participated in the heritage mapping project of Wikimedia Foundation Philippines wherein we documented heritage structures and buildings and made Wikipedia entries about them. I have also assisted some local members of the Slow Food Movement in documenting our food products and food processes to help prevent the disappearance of local food cultures and traditions.

I believe one article is not enough. So, for now, I am focusing on the MassKara Festival, especially that the festival has elevated the consciousness of its publics on the ASEAN and how it helps us trace and preserve our own culture as well as identify what is distinctly Filipino. The local government also has a goal in mind, with Bacolod City Mayor Evelio Leonardia expressing confidence that Bacolod will have brighter prospects with the ASEAN integration. “The integration of our country with nine other nations will mean that our horizons will widen, the playing field will be expanded, and we will have a new political and economic order,” he said.

According to the Department of Foreign Affairs, Bacolod was the first local government in the Philippines that made initiatives in raising awareness and implementation of the ASEAN integration.

There’s more to be done. There’s more that we need to know. The possibilities are endless. For now, head over to my hometown, Bacolod City, and enjoy the MassKara Festival. Kari na!