The Grand Palace in Thailand 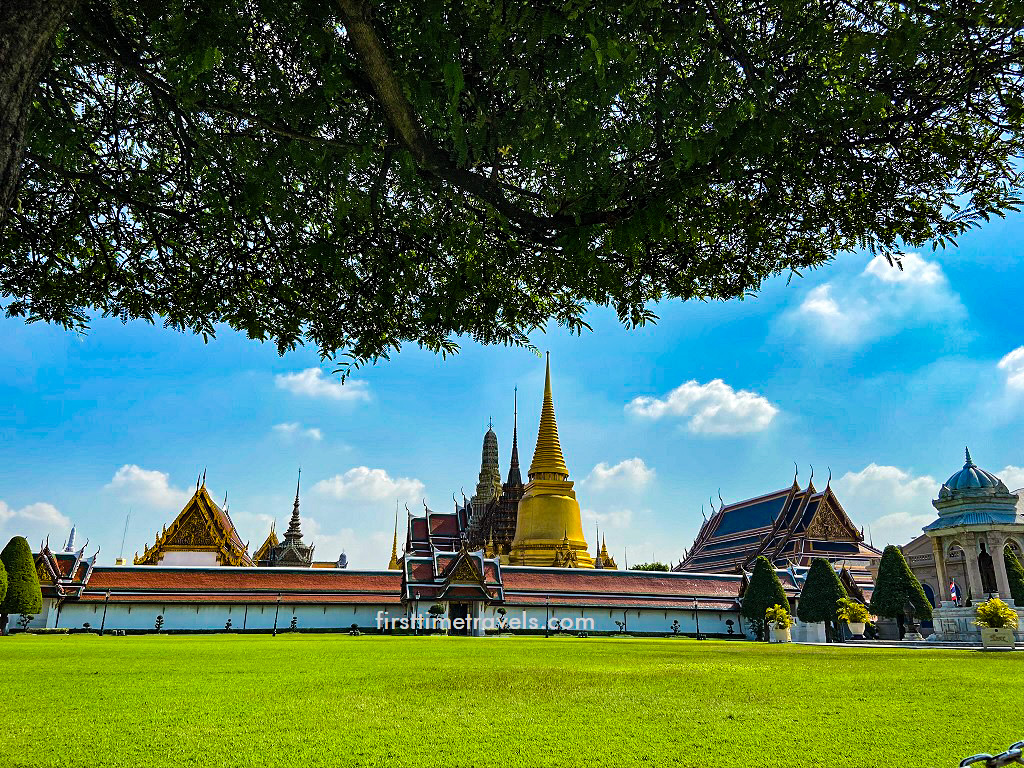 Elegant signature Thai architecture protruding from the long block of white walls greeted us as we approached the Grand Palace complex in Bangkok, Thailand. Memories of my first visit in 2001 flooded my mind, yet I can only vaguely recall the details of every corner of the palace compound. Constructed in 1782 during the reign of King Rama I, the 218,400 square-meter complex houses Temple of the Emerald Buddha or Wat Phra Kaew, major and minor halls, museums, pavilions and offices related to Thai royalty.

Entrance to the Grand Palace

It is easy to get to the Grand Palace. You can take any of the following modes of transport:

Entrance to the Grand Palace costs THB500 (about USD16.50) for foreigners (entrance is free to Thai nationals), which includes access to the Wat Phra Kaew, The Temple of the Emerald Buddha Museum, the Queen Sirikit Museum of Textiles and other open to public areas within the Grand Palace grounds during the day of purchase. The ticket, which can be bought at the Grand Palace ticket booths or online, also gives visitors free access to the Arts of the Kingdom Museum, the masterpieces by artisans of Queen Sirikit at the Ayutthaya province within seven days after the ticket is purchased. It also serves as a free pass within seven days after purchase to a free Khon Thai classical masked dance at the Sala Chalermkrung Royal Theatre. A free shuttle service is provided to visitors from the Grand Palace to the Royal Theatre and back.

The Grand Palace is open daily from 8:30 am to 3:30 pm. However, proper dress code is strictly observed when entering the Grand Palace, especially Wat Phra Kaew. Please note the following attires as not acceptable in places of worship and avoid wearing them — sleeveless shirts, vests or tank top, short top, see-through top, short hot pants or short pants, torn pants, tight pants, bike pants and mini-skirts. Photography is also not allowed inside Wat Phra Kaew. Most of all, observe proper decorum at all times.

It can get too hot during the day, so get your umbrellas and fans ready. If you wear hats, be sure to remove them before entering a sacred place (along with your footwear, except socks.) A water bottle or container can come in handy because there are water fountains in some areas of Wat Phra Kaew. But we decided to make a short stop at the refreshment place beside the ticket booth before entering the Wat Phra Kaew area. It has a grocery store and coffee shop with some tables and chairs in the air-conditioned area and al fresco.

Also known as the Wat Phra Sri Rattana Satsadaram or Temple of the Emerald Buddha, Wat Phra Kaew is a royal temple that houses the Emerald Buddha. It was built in 1782 as well with features similar to a Buddhist temple except that it does not have living quarters for the monks. The most important building in the temple area is the Phra Ubosoth, which is the Chapel of the Emerald Buddha that is used for ordination. It has very detailed mosaics. Behind the Emerald Buddha is a mural depicting the enlightenment of Buddha.

Outside the chapel of the Emerald Buddha are six pairs of giant Demon Guardians at each gate facing the chapel. Beside the chapel on an elevated platform is the Phra Siratana Chedi, a bell-shaped structure where relics of the Buddha are enshrined. Other structures in the temple Wat Phra Kaew area are the Phra Mondop, which is a Buddhist library; model of Angkor Wat, the Khmer temple in Siem Reap, Cambodia; Phra Bussabok, or the four pillars with elephant statues around them; the Royal Pantheon or Prasat Phra Dhepbidorn, which is a pavilion; the gallery of the Ramakien Story, which is the Thai counterpart of the Ramayana epic of India; and other attractive edifices, so keep your eyes open when you walk around Wat Phra Kaew.

When you exit the Wat Phra Kaew at the Belfry Tower and walk a few meters, you will see the attractive and grandiose Chakri Maha Prasat Hall. It is also accessible via the Phimanchaisri Gate behind the ticket counters. It used to be the royal residence built in 1877 during the time of King Rama V or also known as Chulalongkorn. It has a mixture of European style and Thai architecture as the original design was made by British architect John Clunish.

Also near the Chakri Maha Prasat Hall is the Dusit Maha Prasat Hall, which is the grand spired hall used for the annual Consecration Day Ceremony. Its roof is eye-catching because of its many layers with a chedi on top at the center. Other buildings in the area are the Wat Phra Kaew Museum, Snamchand Pavilion, Rajruedi Hall, Dusita Phirom Hall, Hor Sastrakom, Borom Phiman Mansion, Phra Maha Montian Group, Aphorn Phimok Prasat Pavilion and the Queen Sirikit Museum of Textiles, among many others.

We made a short visit at the Wat Phra Kaew Museum where interesting pieces were on display. If you get too tired of walking, a shop and eatery is right next to it where you can enjoy some ice cream to combat the heat.

A tour of the Grand Palace is a great way of knowing the history and culture of Thailand, its leaders and its people. It also made me appreciate the arts, skills and talents of the Thai. Our eyes had a fill of the beauty of this kingdom. As we exited the gate near the Wat Phra Kaew Museum, we were greeted by a staff informing us that a shuttle service is available for the free Khon Dance show at the Royal Theatre. It was 15 minutes to the next show so we took the opportunity to ride the open-air tram and enjoy the surroundings of the Grand Palace to the Sala Chalermkrung Royal Theatre.

One thought on “The Grand Palace in Thailand”

← GrabFood in Bacolod: your fave food at your doorstep ← Sunset at Wat Arun