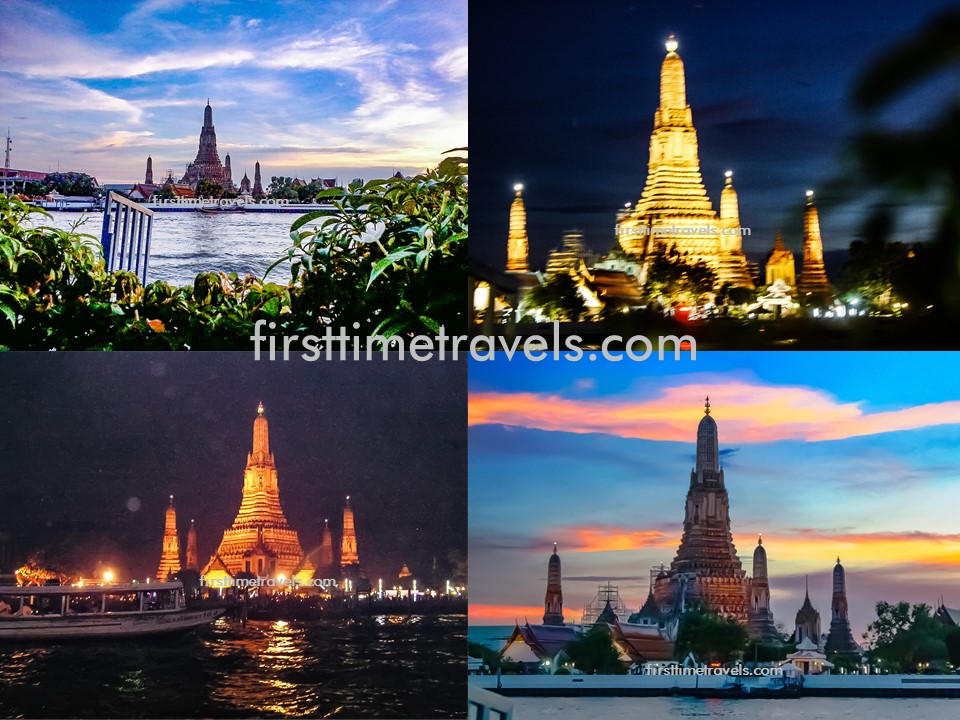 I have always viewed Wat Arun from across the river several times, sometimes waiting for the sunset and watching the lights go up at the temple. This time, I decided to see it up close, a good decision I might say. Before, I thought Wat Arun was plain gray, but when I recently visited Wat Arun, explored its grounds and looked at its towers, there are intricate designs for every layer.

Just across Wat Phra Kaew is the Wat Pho or the Temple of the Reclining Buddha, the largest reclining Buddha in Bangkok and one of the biggest in Thailand. Adjacent to it is the Tha Tian Market where the pier going to Wat Arun is located. When we arrived at the market, the line outside to the pier was already quite long and I was worried that we might not make it to the other temples we wanted to visit. The good thing is that the line moved quite fast and we were able to take a good look at the stalls outside the market and within the pier on our way to the ferry.

For those who do not want to take the ferry, Wat Arun is also accessible by tuktuk, taxi, Grab or private car, although the ferry is still the cheapest and fastest way to get there. If you come from other parts of Bangkok and want to go to Arun fast, the nearest BTS station is the Saphan Taksin station, which is connected to the Chao Phraya Express Boat to Tha Tian pier then cross to Wat Arun’s side of the river. When you visit Wat Arun, make sure that you wear appropriate clothes when visiting this sacred landmark.

It only took a few minutes on boat and THB4 (about USD0.13) per passenger to get across the Chao Phraya River to Wat Arun, often referred to as the Temple of Dawn. Entrance to the temple is at THB50 (about USD1.66) for foreigners. It is open from 8:00 am to 5:30 pm.

Named after the Hindu god Aruna, Wat Arun is the site where Wat Makok, meaning Olive Temple, believed to have existed during the time of the Ayutthaya kingdom. With the fall of Ayutthaya, King Taksin established the Thonburi kingdom and renamed it Wat Chaeng where the image of the Emerald Buddha was enshrined. King Taksin is said to have promised to restore the temple when he passed by it at dawn. It used to be part of the royal palace during the Thonburi kingdom until King Rama I of the Chakri dynasty of Siam (now Thailand) transferred it at the other side of Chao Phraya River. Restoration has been done over the years and improvements were made in its structure and complex.

Wat Arun reminded me of Angkor Wat in Siem Reap. It is because Wat Arun is built in Khmer style where the central prang or tower represents Mount Meru. Visitors can climb the tower up to a certain point and marvel at the view of the Chao Phraya River and the Grand Palace at the other side of the bank.

If before I only watched the sunset on Wat Arun from afar this time I was able to stand on Wat Arun as I see the sun slowly go down on the horizon. The best part is that I was able to see the fine details up close and appreciate more the beauty of Wat Arun.