Visita Iglesia in Bacolod and Bago 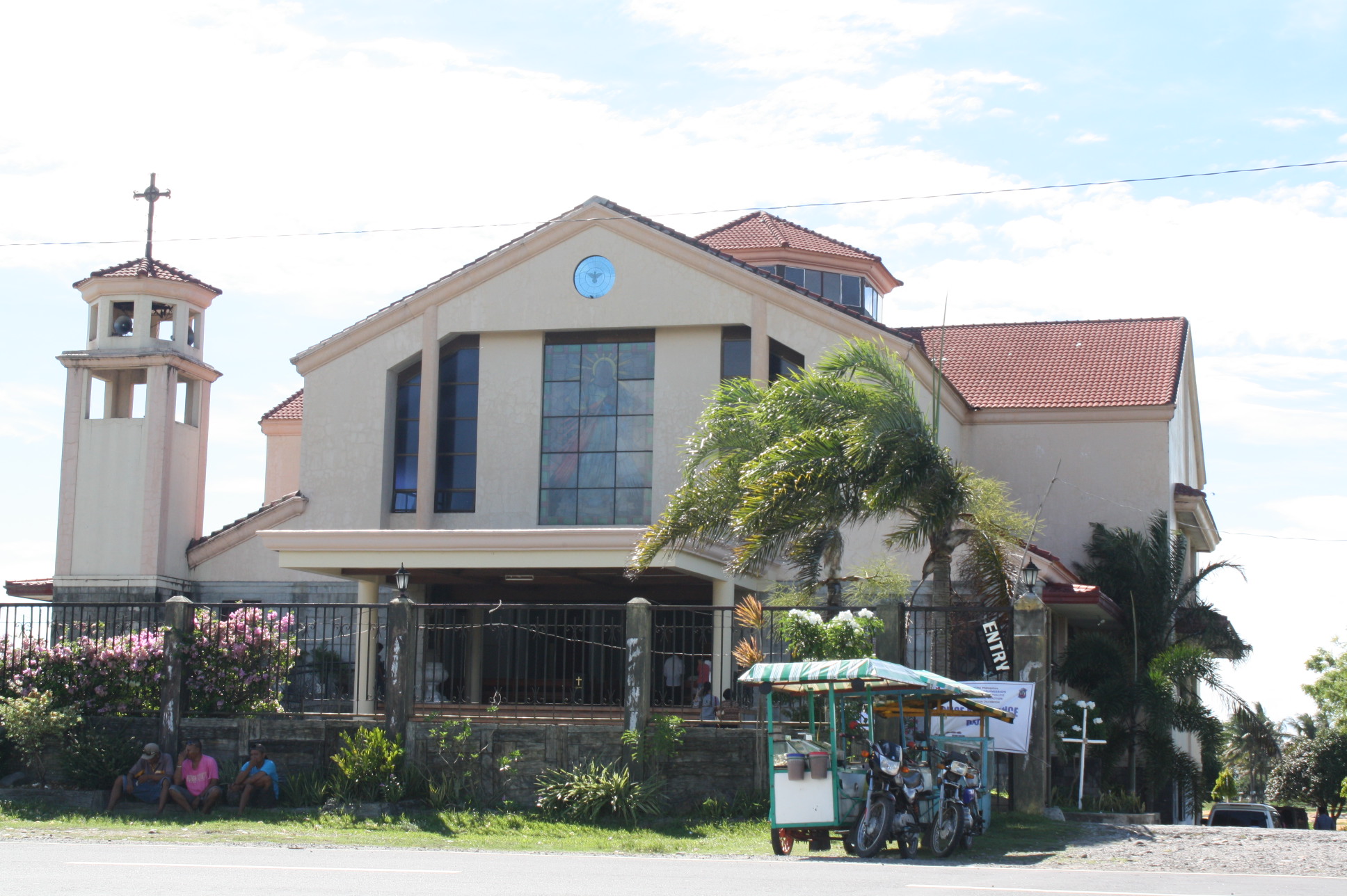 No longer familiar with the city where I grew up, I relied on my sister and Google in plotting our Visita Iglesia, or the traditional church visitation every Holy Week, around Bacolod. Since we have not visited that many churches in our own hometown, we thought of going to churches that were new to us, most of which were in the southern part of Bacolod City bordering towards the next city to its south, Bago. We decided to start from the farthest church, which meant going as far as Bago City.

On a sunny afternoon, my sister and I made our way to the Ceres Bus terminal in Libertad where we took a minibus plying the southern Negros route. Not really sure of the exact location of the first church, we asked the bus attendant to drop us at the Divine Mercy Shrine in Calumangan, Bago City, which was just along the highway.

We passed by some parishioners getting ready for the procession.

The pottery stalls at the side of the road.

Taking the non-air conditioned minibus and seating by the window, I took some snapshots of things I saw along the way, such as the Islamic Mosque beside the bus terminal, the rows of pottery stores in the Tangub area, the rice paddies and marshland, and the small stalls outside the churches. Some parts of the highway were under repair and some construction jobs were being done when we took this trip.

As we entered the border of Bago City, we passed by Distileria Bago, which meant that the church might be nearby. A few kilometers away, we got off at the shrine, which stood at the right side of the highway.

Distileria Bago along the side of the highway.

The Divine Mercy Shrine and Chaplaincy is a modern church that embodies some of the traditional features of old churches, such as the belfry, stained glass windows and front steps. It also has a bird’s eye view dome in the center of the church.

The altar shows three paintings, that of the Divine Mercy image of Jesus Christ, found at the middle, while Jesus appearing before Sister Faustina, and the image of the Lady on both sides. The church has many windows which enable air and light to stream into its interiors.

The facade of the Divine Mercy Shrine, Bago City.

Across the church is a grassland, where we found carabaos, cows, sheep and herons grazing the grasses. A small waiting shed stands at the roadside where commuters and passengers can stay and hail a bus or a jeepney going to Bacolod.

Across the church is a grassland.

2. Our Lady of Lourdes Parish

We rode a jeepney that was going back to Bacolod and told the attendant to drop us at the Taloc Catholic Church. We also passed by a Baptist Church and an Adventist Church along the way before we got to the Our Lady of Lourdes Parish. We again passed Distileria Bago on our way to the next church.

The right side of the Our Lady of Lourdes Parish in Taloc, Bago City.

The altar has a higher ceiling from the rest of the church. It has a blue painting depicting the sky and the clouds. A statue of the risen Christ is in front of a wall of stones while the images of Lady of Lourdes in a grotto and Bernadette are erected at the left side of the image of Jesus by the altar. Miniature lame crutches hang by the grotto at the altar, reminiscent of the miracles at the rock cave of Massabielle, in Lourdes, France.

A closer look at the altar.

From Our Lady of Lourdes, we took a tricycle towards our next church. As we neared Sum-ag, we saw the school at the right side and the parish at the left side of the highway.

Sum-ag is one of the oldest areas of Bacolod.

An arc with the name of San Juan Nepomuceno Parish greeted us at highway as we entered the church compound. Stalls selling food and various items stood outside the compound’s walls.

Stalls outside the church.

An image of San Juan Nepomuceno stands atop a water fountain, with him carrying a crucifix with the crucified Christ. The saint is better known as St. John of Nepomuk or St. John Nepomucene, who is the national saint of the Czech Republic and a patron saint against calumnies. Since he died of drowning after he was thrown into the Vltava River, he became a saint known as a protector from floods.

The entrance of the San Juan Nepomuceno Parish in Sum-ag, Bacolod City.

The church’s interiors have arches on the side, while the altar has three arches with a blue-painted wall at the backdrop and heads of cherubs above the arches. It has a semblance of a loft on the sides of the church. The stations of the cross around the church are relief sculptures while large paintings are also seen in other parts of the church.

Inside the San Juan Nepomuceno Church.

Again, passing the rows of pottery stores, we came next to the San Isidro Labrador Church, still along the Negros South Highway (or Araneta St.)

The San Isidro Labrador Church from the main entrance. It was packed with parishioners during the holy week.

Similar to the San Juan Nepomuceno Parish Church, San Isidro Labrador Church also has a semblance of a loft. It has an intricate altar, with columns that remind me of images I’ve seen of St. Peter’s Basilica in the Vatican. The altar is elevated and behind it is a huge image of the Christ, at this time wrapped in purple cloth, and glass windows in the background that allow light to stream in.

The church’s facade from across the highway.

The church’s interiors have intricate designs while its exterior has bricks, thatched roof, and stained glass. Outside the church, the images were being prepared for the procession.

This image was being readied for the procession.

From Tangub, we took a jeepney going to the Central Market and got off at Alijis Road, across the old Bacolod Airport. From there, we took the Alijis jeep going to Pana-ad. We passed by Aldrtz Pau, Greeno’z Pizzaria, Bong Bong’s Pasalubong Center, Bacolod Memorial Park, and St. Peter’s Chapels before we arrived at the St. Jude Thaddeus Church.

The church’s facade reminds me of some churches I have seen in California, USA, especially in LA because of its touch of Mexican architecture. Inside, the church has a colorful ceiling, while the colorful tiled floors reflect the design of the ceiling. With its yellow lights, the altar glows like gold where there are statues of Mama Mary and of Jesus on either side, as well as paintings of each beside the statues.

A closer look at the facade.

The church is said to have been built within the span of two years and ten months, with only P150,000 as a starting fund. The parishioners themselves pooled their resources and got the support of friends and benefactors to build what today is known as the St. Jude Thaddeus Parish and Shrine.

From Alijis, we made our way to the city’s Central Market to catch the Villamonte jeep. But after waiting for several minutes, we decided to take the Homesite jeep and get off at the B.S. Aquino Drive along Burgos St. From there, we took a pedicab that brought us to our next church.

The Immaculate Conception Shrine and Parish inside a village.

Immaculate Conception Parish and Shrine is located inside a village; in Villamonte, to be exact. It looks like a newly built church with its facade having a grayish finish and its architecture with sharp angles and edges.

Its exteriors have sharp angles and edges.

The interiors are, well, “immaculate”, the best word I can attach to it. The ceiling is white with some beige lines while the walls are painted in plain beige. Colored stained glass windows adorn the sides of the church while the center aisle floor is made of maroon tiles with two strips of white tiles, creating a feeling of a red carpet. The altar is elevated and only the image of the Immaculate Conception is seen behind it.

Inside the Immaculate Conception Shrine and Parish in Villamonte, Bacolod City.

7. Our Lady of Candles Church

Taking the tricycle, we rode to the next village where the Our Lady of Candles Parish is located. It has a modern and simple facade, with two life-size images of angels with trumpets that guard both sides of the main entrance.

The facade of the Our Lady of Candles in Capitol Heights, Bacolod City.

A closer look at the facade.

The church has marble floors and walls. Its elevated altar has something like a loft at the background where the larger-than-life image of Mama Mary carrying the child Jesus looms. At their sides are designs of giant candles.

The altar of the church.

Located inside a village, the church has a serene and warm feel as it is surrounded by homes. It was a reflective journey. It was never easy, commuting under the scorching heat of the sun. But it was all worth the sacrifice as we felt God’s love as we followed the stations of the cross in these churches.

A pine tree outside and residences surrounding the church give it a homey feel.

Note: All photos were taken by the author, Claire Marie Algarme. No part of this blog should be copied unless granted permission by the author.