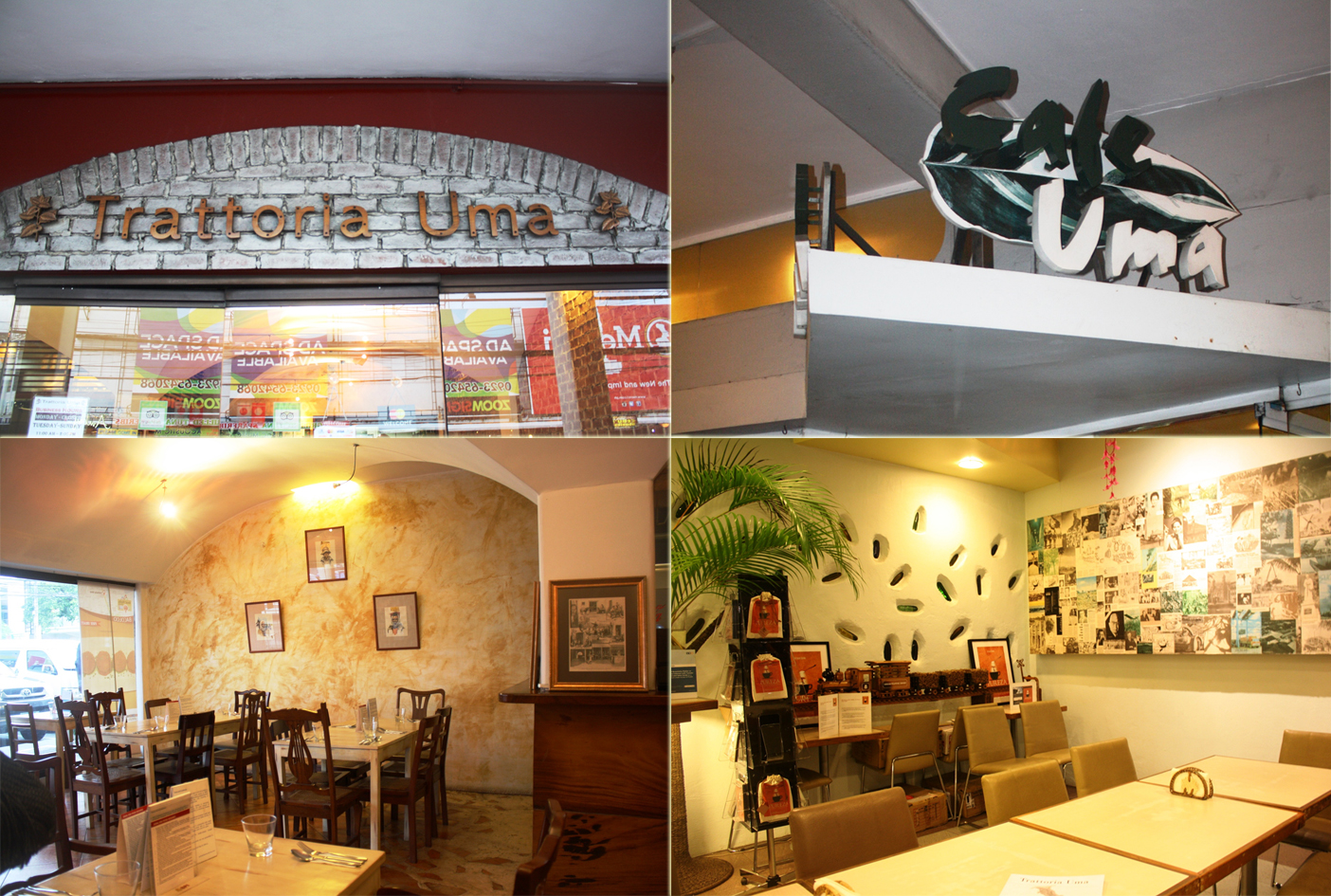 When you’re in Negros Occidental, the “sugar bowl” of the Philippines, where vast sugarcane plantations meet your eyes as you hit the road, you’ll consistently encounter the word “uma” (with stress on the second syllable), which translates to “farm” or those areas that are often called “haciendas” by the locals.

For me, “uma” is a picture of greens and vegetation everywhere, with a house in the middle that has an open-air balcony where you can sit all day and look out at the horizon while the breeze blow on your face. Animals roam freely. The music of the birds chirping and the leaves rustling harmonize with the sound of the wind. It may be the equivalent of a vineyard in Europe or the estates in Southern America.

It is the same relaxing and homey feel that the people behind Cafe Uma and Trattoria Uma in Bacolod City — brothers Chef Juan Miguel Gaston and his brother, Joey — thought of opening these two restaurants in the City of Smiles. Combine that ambiance with the delectable family menu that is often shared on family gatherings.

In 2001, the Gastons first opened Cafe Uma at the little corner of the Negros Showroom where original products from the island are being showcased. As more people frequented the place, they moved to a larger space at the CSI Building located at the corner of 15th and Lacson Streets. The current space has interesting facets, such as the wall display of the pages of Sugarlandia Magazine, published in the 60s, that featured interesting information about Negros Island; the tiny sugarcane trucks made of wood, and the wine bottles used as part of the wall.

Separated by bottles. The upper photo is the Trattoria Uma portion while the lower photo is taken inside Cafe Uma.

History wall from the pages of Sugarlandia Magazine.

Before I go into talking about their food, let’s walk a little bit, round the corner to Lacson St. and three to four doors away, in the same building, is Trattoria Uma. “Trattoria”, in Italian, is an informal restaurant and Trattoria Uma is a simple, rustic food joint that specializes in Italian food. Their menu list shows the map of Italy, shaped like a boot, and Negros Island, shaped like a sock, side by side. On it were the words “dalla nostra cucina per voi”, which literally means, “from our kitchen to you.”

The boot and the sock go together.

The pizzas served to us – (clockwise from upper left) Margherita, Funghi con Pancetta, Salmone, and Asian.

By the way, did I mention that they allowed us into their kitchen? it was so neat and clean and their cooks busied themselves preparing our meals, for us to enjoy. It came as no surprise that the Philippine Tatler has recognized Trattoria Uma as one of the Best Restaurants in 2014.

A stamp of recognition from the Philippine Tatler.

Desserts and warm beverages to cap the night.

Chef Juan Miguel “Jomi” Gaston sure knows how to tickle our palate. He was trained in the Culinary Institute of America in Hyde Park, New York, USA, where he earned his Associate Degree in Culinary Arts. He has worked in several countries abroad before he finally devoted his time and expertise in Gruppo Uma, where he takes care of all the restaurant concepts, with Cafe Uma specializing on Asian and European Cafe Cuisine and Trattoria Uma Restaurant on authentic Italian Cuisine. Though Chef Jomi and Mr Joey Gaston were not present when we dined in their restaurants, we were graciously hosted by Mrs Ina Gaston, who advocates for local products and is active in the Association of Negros Producers. She proudly told us that the things they use in Cafe Uma are made by local producers.

And as we chatted over dessert, sipping our coffees and chocolates, I basked on this moment where we relaxed and enjoyed good food just like how people do in the “uma”.

← My Music Festival 2015 in Malaysia ← First-time in Orange Karenderia