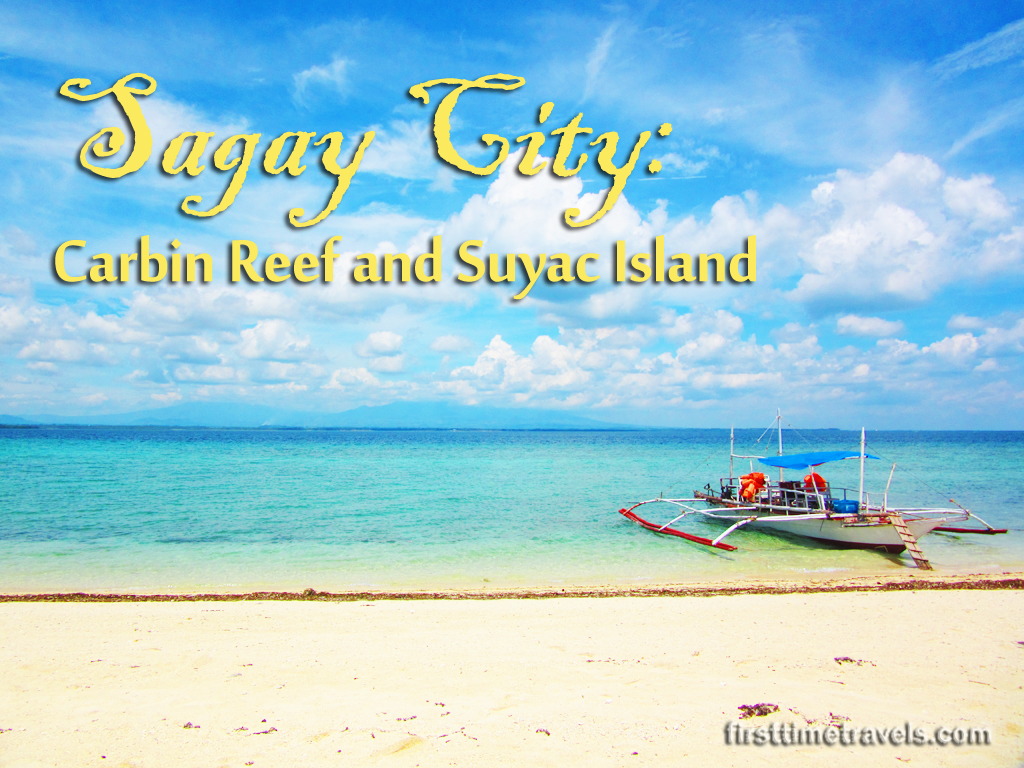 It has been years since I ventured to the northern part of Negros Island, Philippines. The farthest I got last year was until Cadiz City when I went to Lakawon Island (READ: First-time in Lakawon Island). Before that, I have been to Escalante way back in 2001. And with the buses en route to San Carlos City now pass through the town of Don Salvador Benedicto, going to the coastal north of Negros has become a rarer occasion.


Recently, after our Camotes Island Adventure (READ: First-time in Camotes Islands and 10 Things to Enjoy in Camotes Islands) in Cebu, Jojo Vito, Mr. E and I planned to go to Sagay City in Negros Occidental province. Mr. E immediately contacted his friends in the Sagay Tourism office and he arranged for the trip three days after we get home from Camotes. We also invited our fellow Negros Bloggers, Ed Joven and Glady Reyes.

While we drove on private vehicle to Sagay City, those who are commuting can reach it by bus from the Bacolod City North Terminal in Brgy. Bata or from San Carlos City. Bus fares vary, depending if you are in a regular bus or an air-conditioned one and based from where you boarded it. When you arrive in Sagay City, you can take the tricycle to the Old Sagay port.

If you have plans to visit Carbin Reef and Suyac Island Mangrove Eco-park, there is a need to make prior reservations as entry to these islands are being controlled, for environmental purposes.

The port of Sagay is where you will find the Museo sang Bata sang Negros and the information center to the marine reserve.

If you prefer to stay in Sagay City for a night or more, there’s Balay Kauswagan for you. Kauswagan literally means “progress”, thus, the center, which is owned and managed by the city government, symbolize the growing industries in Sagay. It is also a major convention venue in northern Negros, which has hosted various occasions, seminars, trade fairs, and exhibits.

It was our first stop when we arrived in Sagay and we saw that the main hall is being decorated for a special event. There we met Center Manager Dana Gensoli who toured us around the premises, including the pools within the center’s property. Below are the rates for the rooms:

The driveway of Balay Kauswagan.

The main hall was being decorated when we got there. Seems like a special occasion was happening that day.

The small pool is ideal for children.

I have heard of Museo Sang Bata sa Negros only at the Sagay City pavilion inside the Panaad Park and Stadium in Bacolod. It was an amazing experience to finally set foot in the museum. This hands-on and interactive children’s museum is located right at the port of Sagay City, the gateway to the 32,000-hectare Sagay Marine Reserve. It is a must to stop by this museum before you embark on an exploration to Carbin Reef and the Suyac Island Mangrove Eco-park.

The children themselves , or the Museum Junior Guides, told us the underwater story, which was composed of data and information on the marine life in Sagay City, the kind of species we see under the sea, how we destroy our seas, and the ways by which we can take care of them. The museum also features Filipino games, toys, a library, and other attractions. You can lend support by volunteering in the museum or placing a donation.

The Museo sang Bata sa Negros is an interactive museum that educates visitors about caring for our marine life.

These junior guides took us through the story of the sea.

We had to take a photo with this kids. They were really awesome!

At the Museo Sang Bata, we met up with Iris Faith Sumpio of the Sagay Tourism, who accompanied us to the marine reserve.  As stated above, it is mandatory to coordinate with the Sagay Tourism Office for bookings to Carbin Reef because it has a carrying capacity of 70 persons only, in order to  preserve the sand bar as well as to maintain safety for the visitors.

It was about 15 minutes at sea from the Sagay Port when we spotted the gleaming white sand bar from afar. But if you think this is beautiful enough, be ready for more surprises because it is even more beautiful around the sand bar as we snorkeled and marveled at the corals, clams and fishes beneath the water’s surface.

Before you embark on a trip to Carbin Reef, a 200-hectare marine sanctuary, there are a few things you need to bear in mind to make sure that you help protect the area rather than contribute to the destruction of the place.

Do not leave any garbage in the sand bar or the reef. Take with you whatever you bring to the sand bar. Do not throw them to the sea as they will cause harm to fishes and the marine habitat.

Do not touch anything when you snorkel or dive. Only stay within the designated area and only 15 people are allowed to snorkel at a time. Do not feed the fishes.

Cook only on designated areas, such as the grilling place, and not on the sand.

Take note of the rates for visitors who are not residents of Sagay City:

Should you encounter any difficulty or in case of emergency situations, you may also contact:

We spotted the sand bar from afar.

The clear waters were inviting. But we opted to go snorkeling in the middle of the sea, just off the shore, where we saw giant clams and colorful corals.

Sheds are now built on the sand bar but entry to Carbin Reef is being controlled for environmental and safety reasons.

From Carbin Reef, it was about 10-15 minutes to Suyac Island. The mangrove forest fill the fringes of Suyac, a pleasant sight to anyone visiting it. As we docked by its port, members of the local community — the Suyac Island Eco Tourism Association (SIETAS) that manages the island — welcomed us warmly with a briefing about the place, the species found in the forest, the rules and regulations (no smoking in designated areas and no two-piece bathing suits because they’re not used to it), and other information about the island and their community. Before the orientation ended, they also entertained us with a dance and a local song.

The forest is rich with various mangrove species. The oldest is the 300-year old mangrove tree that is situated right next to the bamboo walkway.

You can rent a cottage in the forest (there are only 5 cottages in the eco-park), order food that the community will prepare for you and swim at the edge of the mangrove eco-park or inside the park when it is high tide. Below are rates that you need to take note of:

The Sagay Tourism Office can assist you in coordinating with the SIETAS or you can contact Vangie at +63 907-3962199 or:

Various mangrove tree species are found in this forest.

The cottages at the edge of the eco-park.

The local community manages the eco-park. They also prepare the food for you.

The one in the center is their kinilaw, a must-try.

Don’t you love to feast on this one?

After our snorkeling and swimming escapades in the marine reserve, we made one last stop at the Margaha Beach, just a short distance from the port. The first thing that caught our attention were the art installations in the sea as they stood firm in the midst of the waves. Then, a two-storey structure made of bamboo and native materials came into view; a man was painting the façade with colorful designs.

The Kape Albarako signage was then visible by the beach. The coffee shop is also the art gallery of the Syano Artlink. Seventeen-year old Yqfryd toured us inside their property, telling us the story of their family and the arts displayed in the halls.

He led us to their workshop at the neighboring house where we found trash piled in various parts of the house, some of which were transformed into artworks. At the second floor, we came face to face with Nunelucio Melecoton Alvarado, 67 years old, Yqfryd’s grandfather and the main artist behind Kape Albarako. The man painting outside was his son.  For those who do not know this yet, Kape Albarako is a portmanteau of their last name Alvarado and the local kind of coffee, which is kapeng barako.

We chatted with Nunelucio over a mug of iced coffee — the paints and brushes before us and the paintings surrounding us, while the art installations in the sea visible from the window. More than just the art that they create, it is nice to know that their art projects help save our seas by taking the garbage out of our waters.

You wouldn’t miss the colorful structure of Kape Albarako in Margaha Beach.

These art installations at sea were done after typhoon Yolanda.

From trash to art.

An iced coffee and art discussions to cap our day.

We had a chat with the artist, Nunelucio Alvarado.

Sagay City is truly fast becoming an eco-tourism destination in this part of the province. Its tagline of “Where Love for Nature Begins” is apt for the programs it is implementing. It was such a refreshing experience to commune with nature while preserving its natural habitat.