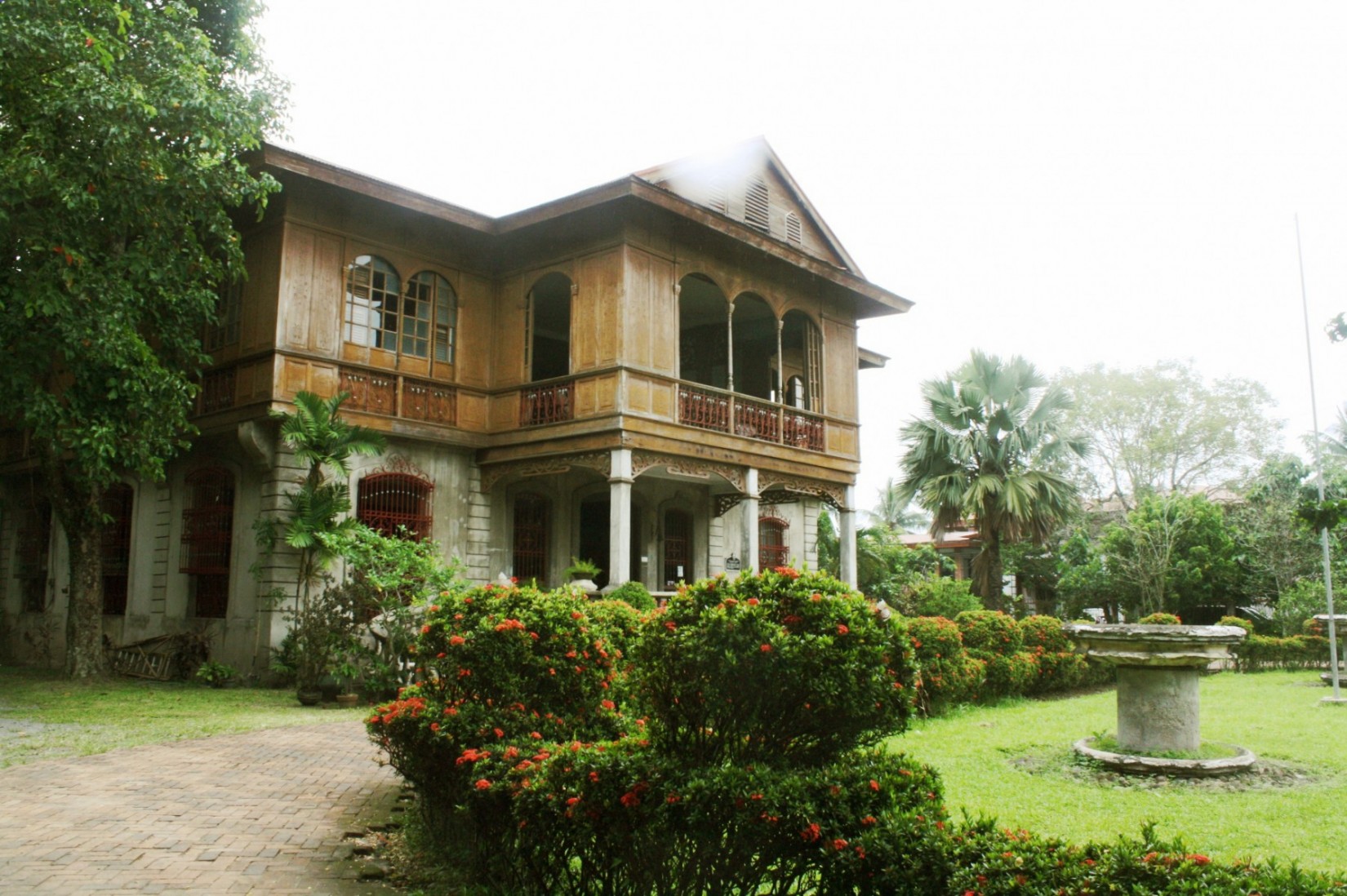 Amid the darkened sky and the impending rain, the heritage homes in Silay City —  the Paris of Negros Occidental, a province in the Philippines — stood proud as they showed off marks of endurance that withstood the ruthlessness of tropical weather and viciousness of conflict and the changing times.

Situated in front of the Leandro dela Rama Locsin Ancestral House along Don Jose “Pitong” Ledesma Street, Café 1925 was a small structure with colored stain glass and a porch on its façade.

The Cafe 1925 signage from the street. That’s in front of the dela Rama Locsin house.

Elaine, our server, graciously welcomed us inside and handed us the menu. Poring over their list of specialties, we settled for bruschetta, marianna, bolognese, and churros con chocolate.

Paintings inside the cafe.

The café was quaint but artsy as the walls were decked with paintings of old houses or of the old Silay. Elaine asked us if we were to visit the heritage houses, to which we answered in the affirmative. At the end of our filling lunch, she handed us a brochure of Silay City and showed us a coffee table magazine of the city that featured most of the heritage attractions.

We wanted to take a peak inside the dela Rama Locsin Ancestral House but Elaine said that the descendants of the owners still lived there and the property is not open to the public.

Along Cinco de Noviembre Street loomed a towering acacia tree with its branches creating a huge canopy over the street. The brown façade of the upper floor of the mansion appeared invitingly as we approached the acacia. It was the Victor Fernandez Gaston Heritage House, or more known as the Balay Negrense.

The huge tree provided a canopy at this part of Cinco de Noviembre Street.

A bell at the porch was the first thing I noticed. It served as a doorbell for visitors to pull and ring when no one is at the front door. A lady approached us at the entrance and informed us that there is a fee of P50 per adult visitor. She then introduced us to Camille, a young tourism student from La Consolacion College-Bacolod who was having her internship at the museum.

Camille led us to the first door on the right. It looked like a small office with a huge desk and a wooden revolving office chair behind it. The tiny room contained the photos of the family of Yves Leopold Germain Gaston from France. He came to the Negros island and helped develop the sugar industry in the province. Married to Prudencia Fernandez of Batangas, Yves’ children were Maria Felicia, Victor, and Fernando.

The roundtable shows the descendants of Yves Leopold Gaston and is updated yearly.

In the adjacent room, a round table was placed at the center with the descendants of Yves Leopold Gaston filled out up to the present generation. Both rooms were small and were once bedrooms. At the other side of the house, the rooms were knocked down, giving way to receiving areas for visitors. At the farther corner at the left side of the ground floor laid a grand piano, a status symbol in olden times.

The left staircase is used by the ladies while the right part is for the men.

At the middle part was the foyer leading to two staircases. According to our guide the steps follow the “oro, plata, mata” way of building stairs with the last step usually falls under “oro” or gold. The purpose for the staircases is that the other side was for the ladies, usually with their long gowns, and the other side was for the gentlemen, so they don’t get to step on the gowns of the ladies.

The view of the street from the second floor balcony.

The upper floor was off-limit to photography but the displays were more about the everyday life of the previous inhabitants of the house. The large area occupying the center was meant for social gatherings, with large windows overlooking the street. The dome of the church could even be seen from the upper floor. Rooms had connecting doors for children to move from room to another when there are social functions, as they are not allowed outside the rooms.

The dining area had one long table for the adults and on both ends of the long dining table are small round tables – one for the boys and one for the girls. The kitchen had ovens and refrigerators, which showed that the Gastons were far advanced when it comes to appliances during their time. The room leads to another kitchen, called the dirty kitchen, where food are cooked manually.

Behind the dining room was a washing area, which could also be used as a balcony. It had a “secret” staircase that leads to the servant’s quarters below. At the opposite end of the kitchen was the bathroom. Outside it was a staircase leading to an upper floor, which the Don Victor would go up so he could view if his imports had arrived.

The motorized bicycle parked at the back of the house.

At the ground floor, behind the foyer, was a driveway for the carriages. Across it was the servant’s quarters and the stockroom. The Gastons also once owned a motorized bicycle. Our guide also showed us the basement, which was built to ventilate the house. It wasn’t used as a place to store goods but just to let air pass below and keep the house cool during the warm season. A space from the earth to the floor could be seen, including the foundation and posts, which are made of balayon, a hard wood that was commonly used in building the ancestral homes in this area.

Our visit at the Manuel Hofileña Heritage House was the most interesting part of our exploration. One of the descendants, Mon Hofileña, who is an octogenarian, not only toured us in his home but also gave us insights that we haven’t known before. The man is a repository of knowledge and it was evident during our interaction with him that he thirsts for it and loves sharing his knowledge to others.

He showed us his collections from his travels, interesting finds, I must say, and from his passion for the art. The second floor, where photograph taking is not allowed, is filled with paintings from maestros and national artists, such as Fernando Amorsolo, Juan Luna, and Felix Hidalgo, including a sketch by a young Jose Rizal. But what is included in the company of these maestros are the artworks of an unknown Silay artist, Conrado Judith, who didn’t have formal education and training when it comes to painting, but had produced superb pieces.

One particular thing that you should anticipate, if ever you visit his home, is the precious stone that even Queen Elizabeth II commissioned to have a necklace out of that stone be made for her.

Our guide, no other than Mr. Mon Hofilena.

The Hofileña family are also artists. His siblings included piano teachers, a ballerina, a dancer, and a theater actor. He is also the uncle of 80’s matinee idol, Rey PJ Abellana, the father of actress Carla Abellana.

Some of his collections.

Mon Hofileña  also conducts tours around Negros Occidental during December. I am already marking my calendar for this one.

The receiving area of the house.

The Don Bernardo Jalandoni Museum was built at a prime spot along the highway. Painted in pink, you will never miss this house when you travel and pass by Silay City. The lower floor of the Jalandonis were intended for the horse carriages and the carabao-driven carrozas.

The pink house along the highway cannot be missed.

Our guide, Rose, led us to the upper floor and allowed me to take photos as long as I do not use flash photography. There we found interesting items, such as the old telephone hanging on the wall, the sewing machine used by women during those times, a stroller, and other household accessories owned by the family.

The carriages parked at the ground floor of the house.

The house, a modern take on the bahay kubo structure, used the hardwood balayon that were imported from Mindoro. The ceiling was imported from Germany, with its intricate designs that made the interior of the house elegant. The Jalandonis also had an ice storage box, given that ice during their time was still being imported from the US.

The four-post bed with canopy.

A porch was found at the back portion of the 2nd floor. An old tamarind tree, that has been around long before the house was constructed, stood at the side of the porch.

The tamarind tree is also a heritage tree.

We passed several other houses in the area, although I still plan to talk to the current occupants so I can also explore the interior of these houses and learn the stories behind them. Only the three houses above are currently open to the public, and the entrance fee for each is P50 for adults, with discounts for senior citizens and children.

This heritage walk is far from over. I would be going back there soon to get more information. I’ll post more about these houses in the near future. Meanwhile, I still have to pay the Silay Tourism Office a visit.

Other ancestral homes along the highway that now house various commercial establishments.