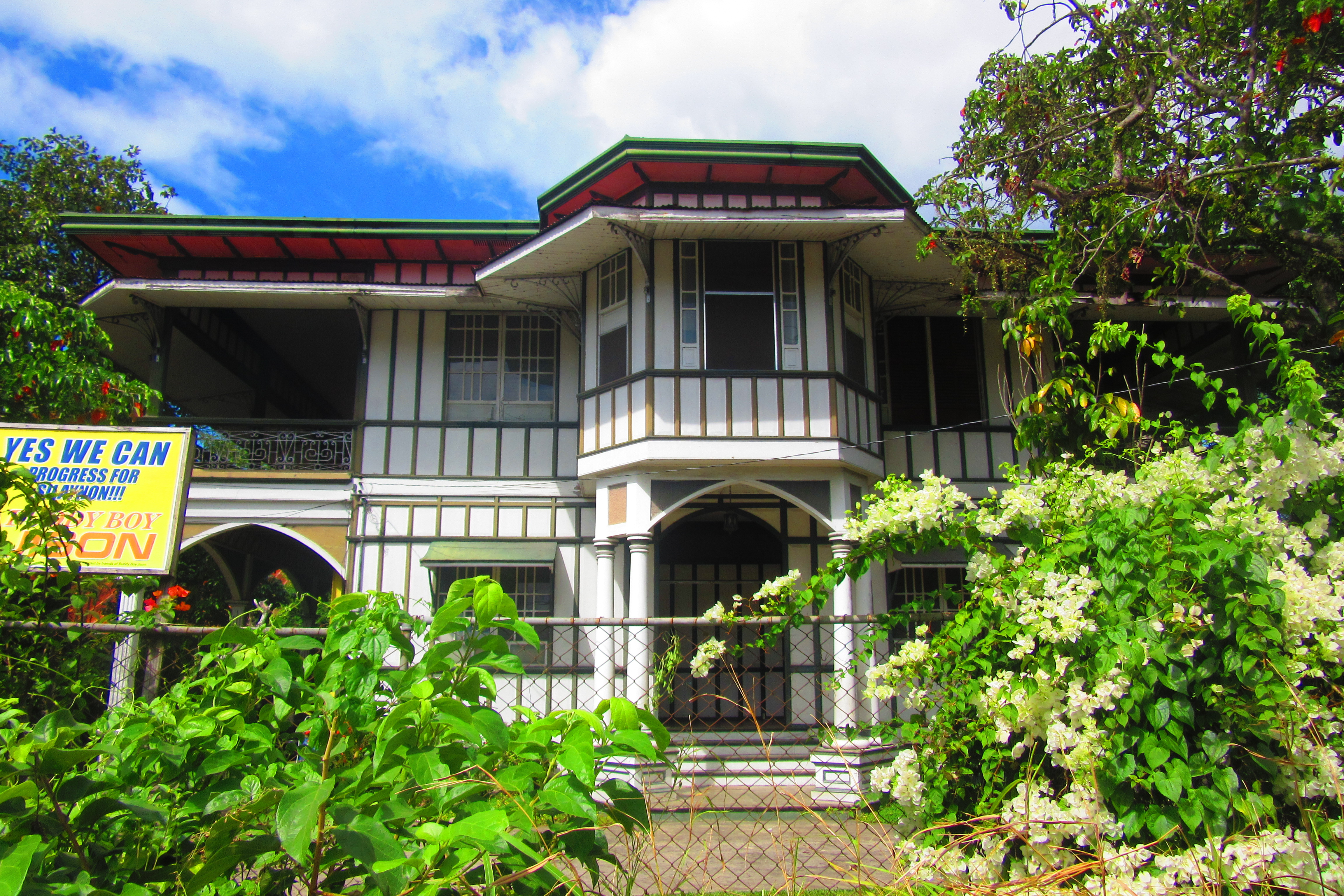 There I was again traversing the streets of Silay City, Negros Occidental, and re-acquainting myself to the old structures that spoke thousands of stories. I have walked Silay City’s heritage district several times since my  move back to the family’s nest last year as a heritage mapping assignment for a Wikimedia Foundation project that I took part as a volunteer. The purpose was to document our historical sites before they are destroyed by nature or by man.

Silay City is known for many historical structures and landmarks.

I already wrote about my own Silay heritage walk wherein it was met with gloomy skies. Even my succeeding visits were always welcomed by a drizzle or dark clouds.

This time was different though. For one, the sun shone so brightly that I got very brilliant colors and wonderful shots using natural light. Two, it was fun to do it in the company of my peers and fellow history enthusiasts in the Negros Blogging Society, Inc. (NBSI or more known as Negros Bloggers). Three, we had no other than a daughter of Silay, Doc Maritel Ledesma, a Negros Blogger herself, who toured us around her city, regaling us with stories we have never heard before or never read in history books. We also got the help of another Negros Blogger, Maricar Dabao, through her Viaje Negrense business, by arranging the tour. Doc Maritel’s relative, Silay City Councilor Solomon Locsin, was kind enough to tour us around The Mansion and, along with Silay City Mayor Jose Montelibano, hosted our lunch at Balaring.

Trucks of harvested sugar cane dot the scenery along the highway.

From the eastern part of Bacolod City, I joined Maricar and two other Negros Bloggers to meet Doc Maritel and the rest of the gang at the San Diego Pro-Cathedral. We traversed the Bacolod-Silay Airport Road and got to our destination in about thirty minutes.

The silver dome of San Diego shone, reflecting the sun’s bright rays. While waiting for the rest, Doc Maritel led us inside the church and showed us the names of those who were buried there. Although the parish was consecrated in the late 18th century, the structure was completed in 1927. It has experienced expansion and renovations and the Catholic Women’s League (CWL) mark dated 1962 is visible in its exteriors. I have created a Wikipedia entry on the San Diego Pro-Cathedral which was improved by other Wikipedians.

The interiors of San Diego Pro-Cathedral.

The ruins behind the church.

What was a surprise to me was that behind the Cathedral was the ruins of the old structure. Within the ruins, the parish constructed a zen-like prayer room. And as we explored, I also found a tiny arch behind the ruins which seemed to be covered by cement with the words Needle’s Eye were engraved.

A wall in the ruins.

Also within the church compound were the old benches that used to be part of the original town square or plaza. These benches still look good and sturdy as they seemed to be made of concrete.

The benches of the old town plaza.

From the church, we turned to the Old Silay Puericulture Center. Doc Maritel said that it used to be a hospital. The structure’s name has been changed several times, depending on who was the sitting government official. There was also a quadrangle behind the building during olden times, which no longer exists at present.

We then proceeded across the street to the Jose Benedicto Gamboa Ancestral House. It was the setting of parties during Silay’s glory days. In fact, the famous movie Oro, Plata, Mata was filmed here. The eaves were very detailed and there were two dormers on top.

The Jose B. Gamboa Ancestral House.

We walked to the end of the block towards what is known as the Green House or the Angel Araneta Ledesma Ancestral House, originally owned by Doc Maritel’s grandfather. I also created a Wikipedia article for this house. This time, we weren’t able to enter because it was under renovation. Doc Maritel brought us back in time through stories of her childhood spent in this house. Too bad they sold this house at P350,000 to another individual, who eventually sold it to the Silay City Government at P1 Million, values that were already large during that time.

Beside it was the Alejandro Amechazura Ancestral House, which has beautiful patterns. I have gone inside this house but since it was devoid of any story, I wasn’t able to write an entry on this one. But Doc Maritel has fond memories of her grandfather’s neighbor.

Right across was the Benita Jara Ancestral House, currently the Sangguniang Panlungsod Building. Since we took this tour on a holiday, the building was closed. Again, I have explored its interiors during my volunteer days and have seen beautiful murals. According to Doc Maritel, changes were made inside and the panels have been moved and re-arranged.

The murals inside the Benita Jara Ancestral House.

We continued on to the Delfin Ledesma Ancestral House. Across the house was the Rural Bank of Silay City and both houses share the same design of their window grills.

The one at the left is the window at the Delfin Ledesma Ancestral House. The one in the right is of the Rural Bank of Silay.

At the adjacent corner of the block was the Teodoro Morada Ancestral House. Diagonally opposite it was the Cinco de Noviembre Monument.

The next block was where the Digna Locsin Consing Ancestral House and the Balay Negrense could be found.

Another amazing landmark are the Generoso Gamboa Ancestral Twin Houses. They look the same yet they are different. They mirror each other, making them doubly interesting.

The twin houses of Generoso Gamboa.

Finally, Doc Maritel brought us to The Mansion or the Leandro dela Rama Locsin Ancestral House. Councilor Solo Locsin was waiting for us there. The two-story mansion looked like it has undergone a major change – it was the second floor that was taken down. There was also a deeper story about the family that owned the house. The Mansion was home to Emilio Ledesma and his wife Rosario Locsin, the daughter of Leandro dela Rama Locsin. Emilio and Rosario has an only child, Adela. The Mansion is also being opened to the public. Items and artworks were being put on display. It could also be used as a venue for gatherings and the like.

The Mansion with the ground floor remaining.

We took a break for a sumptuous lunch at Balaring which deserves a separate blog post. Right after lunch we went back to familiarizing ourselves with Silay’s past as we drove past the remaining houses to take some snapshots. There was the Don Bernardino Jalandoni Museum, or the Pink House, along the highway, which I have already explored before.

This ancestral house is located along the highway, across the city plaza.

The Kapitan Mariano Montelibano Ancestral House, which is more known as the Kapihan, was under renovation, through the help of the government. We took the small street at the Kapihan to visit the houses in that area which I haven’t visited before.

The Kapihan, under renovation.

Our final stop was the Cesar Lacson Locsin Ancestral House, which is more known as El Ideal.  Fourth generation descendant, Mark Sanchez, welcomed us to their family bakery, which started in the 1920s. He prepared before us their buko pie, piaya, lumpia, and senorita. He also gave us a background on how El Ideal started during the time of his great-grandfather.

Before we went home, we dropped by the Manuel Hofilena Ancestral House. We didn’t stay long and never attempted to enter the house. It was fine by me because heritage advocate Mon Hofilena has given me and my sister a tour before. I learned from him that there were plans of widening the highway but he and other heritage advocates blocked the idea and pushed for the preservation of the heritage homes and buildings. Thanks to Mon and his friends, we are still able to visit and view these houses.

Then, we passed by the Soledad & Maria Montelibano Lacson Ancestral House, and went our merry way.  But not without making a quick turn around the Talisay City market before finally heading back to Bacolod City.

It is important that we put value on our historical buildings. We need to inculcate among the young the need to take care of heritage sites and to acknowledge the significance of historical events and learn from them. These historic structures are treasures and we have to do all our best to preserve them and protect them.

49 thoughts on “Negros Bloggers go on a Silay Heritage Walk”