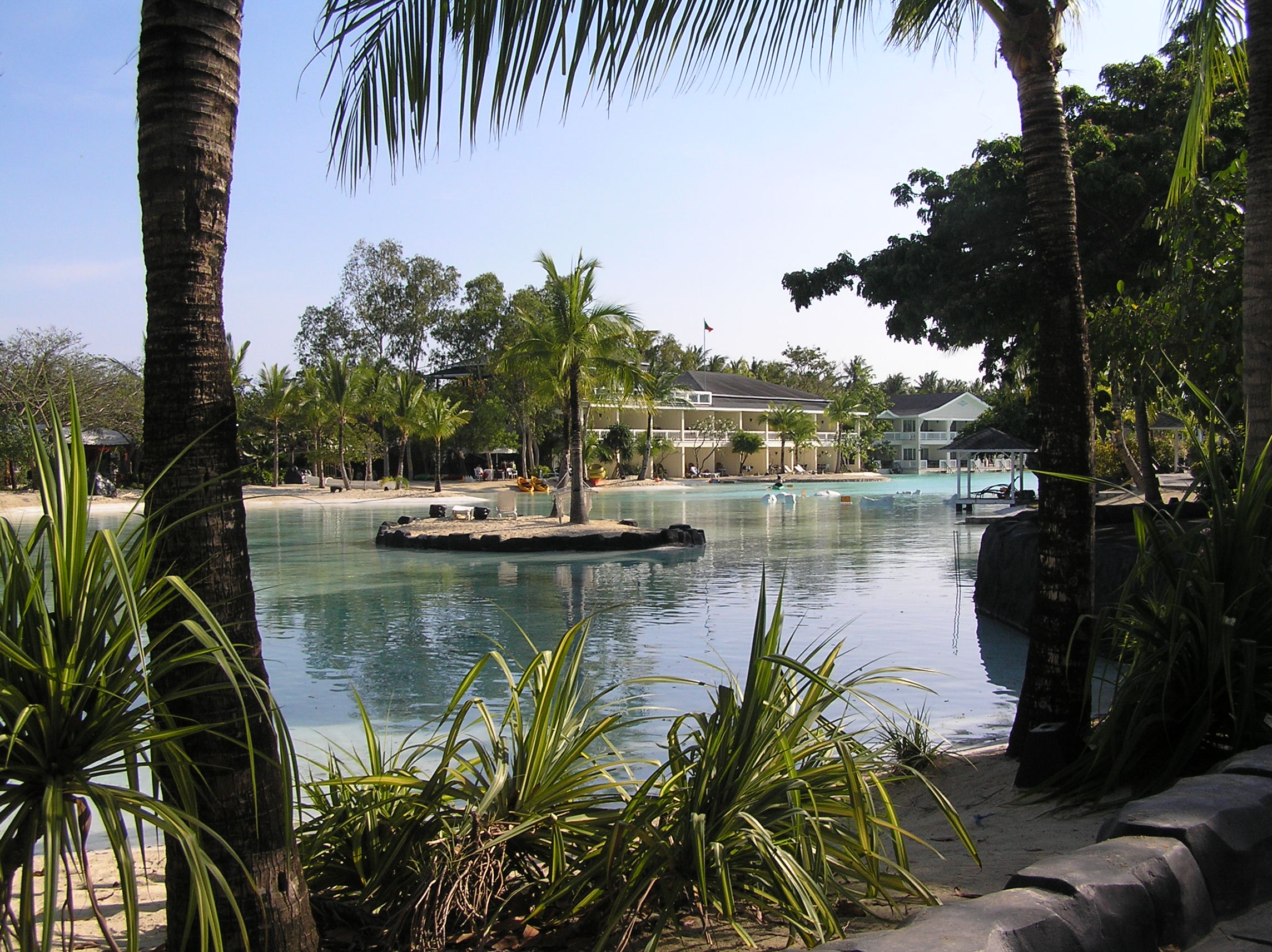 The Plantation Bay Resort and Spa always grace the pages of travel magazines. I’ve seen photos of friends who stayed in this luxurious resort located in Mactan Island, Cebu. I’ve been part of contests that gave out a few nights stay for free in this popular relaxation place.

In 2009, I found out that a cousin of mine was working there. When an opportunity came for me to go to Cebu, I took the opportunity to visit my cousin whom I haven’t seen for a long time.

After I was done with the workshop I had to attend in Cebu, I packed my bags, hopped on a cab and went to Plantation Bay. “Ma’am, it’s a bit far,” the taxi driver warned me. I told him I didn’t mind since I was to catch a flight later that night and the resort was just in the same island as the airport.

But as we left the wide highways and the traffic onto small, narrow roads, I realized how far it was indeed from the city’s center. I informed my cousin that I was on my way but traffic was bad. She said she has a meeting but she’ll ensure that someone will take care of me. She gave a name of a girl I was to look for at the lobby. I realized that my cousin might be holding an important position there.

From the tiny road, the cab turned left to a gate. I didn’t see any buildings but only a lagoon with mangrove trees. At the end of the ride was an imposing open-air reception area. A girl immediately came to me and informed me that my cousin has given her instructions that I be made comfortable while I wait for her to finish her meeting.

The girl took my bag and deposited it at the concierge, led me to a chair and table that looked out to the pools, and gave me soda to drink. I took out my camera and took a few snapshots. Then, I took out a book, along with my iPod. There I was sitting before a scenic spot, sipping Coke, reading a good book, and listening to soothing music. A hotel staff approached me and offered me a cold face towel to ward off the sun’s blazing heat. I glanced up every now and then to see visitors come and go, many of which were foreigners, or watch the horse-driven carriage and the hotel vehicle roll over the bridge.

A Chinese-looking teenager suddenly came to my table. She placed a fruit basket on it, sat down opposite me, and started writing, without offering me a glance. I wasn’t sure if she saw me or what. She also had earphones plugged in her ears and was humming as she scribbled her small note. When she was done, she stood up and folded her note. That’s when she looked onto my face and saw me watching her. We exchanged smiles and she handed her basket to a hotel staff.

After awhile, my cousin arrived. We spent the first few minutes catching up with each other and with family stories. Finally, we stood and my Plantation Bay tour was about to begin.

From the reception area, where the Alcatraz Ballroom is located, we circled the whole area clockwise starting with Zanzibar. At Plantation Bay, names of buildings and facilities were arranged alphabetically counter-clockwise.

We first passed the crab farm where they used to cultivate crabs. Beside it was the gym and gamer room where guests could sweat out and enjoy online games. We headed to a small compound surrounded by rock-like wall. It was the Windward cluster with various rooms and a gazebo and saltwater swimming pool in the center. There were also flat screen monitors scattered in many buildings and cottages where events and announcements were made. My cousin told me that for that day, they would have a Sahara Night dinner event.

We got out of the Windward cluster and proceeded to the Savannah Park where the tennis courts, archery, wall climbing, firing range, children’s playground, golf pitch & putt, and the children’s center were located. We passed by the Savannah Grill and Lounge which served burgers and other food that are attractive to children. There was also a freshwater swimming pool beside the restaurants and a mini-volcano in the middle of the pool that spouted out water.

Next to Savannah Grill was the Ruritania House and Quantum loop. I think the Quantum Villa was the more expensive accommodation. It was surrounded by wooden walls and the gate was closed because occupants here enjoy more privacy than the rest of the clusters. My cousin said that there was also a pool inside.

Since we couldn’t enter the area, we walked straight to Piazza Palermo where there was also a freshwater swimming pool. The pool there was a simple looking, standard size rectangular shape. However this area was close to Palermo Restaurant, which serves Italian cuisine, and has a boutique store and beauty salon.

At the Orion Beach, we saw children and families enjoying the seaside attractions and activities.

The best part of the tour was when we entered the Mogambo Springs Spa. It was like another world inside this compound. The ground was filled with white and black pebbles with a manicured Japanese garden. The floor was made of Japanese materials and the railings had hanging Japanese bamboo sticks that also served as chimes. It was so serene inside.

There was also a pagoda and there were several cottages and indulgence rooms. There was a hot water pool, a saltwater pool, and a freshwater pool with falls that massage the entire body.

Outside the reception area stood a man-made volcano. We went through the tunnel. Atop the volcano was the Mogambo falls where guests could climb and slide down the giant water slides that fall directly to the north saltwater swimming lagoon. I was told that many men have proposed marriage to their partners on top of the Mogambo falls.

Further down the road was the Jamaica Market, the souvenir shop. On the second floor were also rooms, which looked like a tree house. My cousin took me to one of the restaurants she manages, the Kilimanjaro Kafé and showed me the façade of the Mogambo falls. It truly looked magnificent.

Finally, we arrived at the Galapagos Beach, the only natural beach in the entire resort. There was a wharf where guests could do some aqua sports. Others also dive the 40-meter deep diving wall, the underwater cathedral cave. There was also the Fiji Restaurant which served Asian cuisine. Right at the beach front, resort staff members were setting up tents, mats, tables, and pillowcases for the Sahara Night.

We passed several houses more and we were back to the reception hall. My pleasant host informed me that a Daytripper Adventure package would cost a net price of P2000 (around $43.50) which would include a set lunch and access to the pools and other facilities. It’s pretty expensive but, definitely, a luxurious stay especially when you will be pampered like royalty.

No wonder Plantation Bay was named by the prestigious international travel magazine, Condé Nast Traveler, as one of the top Asian resorts in its 21st Annual Readers’ Choice Awards in 2008 and 2009 and its Gold List in 2010.

2 thoughts on “First-time in Plantation Bay”