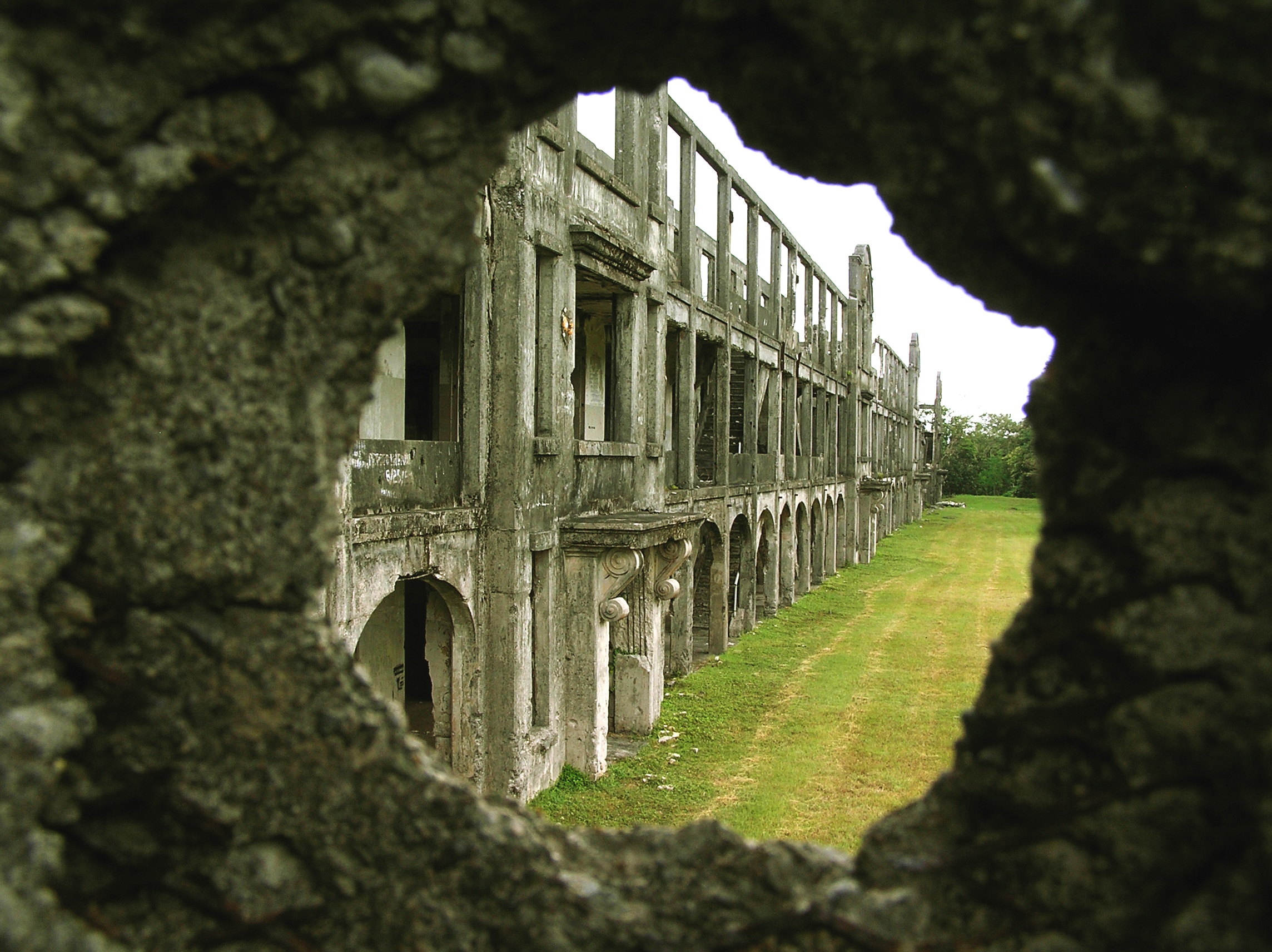 It’s the 4th of July. As much as it is part of American history, it extends to the shores of the Philippine islands. Yesterday, July 4, I went to a place of Filipino-American history, Corregidor Island, where both nations fought side by side.


The first time I embarked on a trip to Corregidor Island, I tagged along my sister and her friends. That time, the Philippine Navy regularly visits the island on Sunday mornings on board one of its naval barges. They extend the service to the public and we grabbed this opportunity for a free trip to Corregidor. Of course, comfort wasn’t an option as we squatted in various parts of the ship.

We weren’t on the tour so we just walked within the port’s vicinity when we landed in this tadpole-shaped island. The highlight of our visit was the lights and sounds show inside the Malinta Tunnel. As first-time visitors, we had no idea what to do or where to go around the island. We were also scrimping so we spent some of our time just hanging out by the beach.

Whenever I’d see photos of Corregidor and its ruins, I’ve always wondered why we never saw those sites. Since then, I had always wanted to go back to the island.

More than a decade after I’ve finally come to revisit this place. My friends and I availed of a 50% discounted gift certificate in the travel expo for a day tour of the island. This time, I’ll explore whatever the tour would offer me. After two cancelled trips, I finally woke on a sunshiny morning.

View of the early morning serene sea from our ferry.

There was a marathon along the way so I had to contend with traffic. So did my other friends. I arrived at the ticketing office where tourists were lined up at the counter window. One particular group failed to make reservations so they were asked to wait awhile. With our gift certificates and official receipt on hand, I confidently asked for our tickets. The lady informed me that my reservation record was marked cancelled!

It was a huge misunderstanding. There I was staring back at the lady thinking of other possible options just to make this trip push through. The other ground crew approached me and asked me if we would be amenable to sit on the non-air conditioned section on our way back because there were many overnight tourists who were scheduled with us on the return trip. As much as I wanted to rant, I gave in just so we would be able to join the tour.

With an hour and quarter at sea, we submitted ourselves to sleep allowing the waves to lull us into slumber. When we were nearing the island, the tour operator started a prelude on the history of the Philippines, highlighting the era when we were under the Spanish rule, the American regime, and the Japanese invasion. All those information play a key role on Corregidor as it was the fortress of the Philippines during World War II.

The guide started by giving the origin of Corregidor, which in Spanish meant “to correct”. It was believed that the island was the “checkpoint” for all ships entering Manila Bay, given its strategic location at the mouth of the bay. It was also where people being punished were sent to serve for community service. Because of this background, the Americans fondly called it “the Rock”.

As we docked on the pier, I noticed how Corregidor has greatly transformed. Tranvias or tram buses picked us up at the north dock. We took bus no. 6 with Momet as our guide and Orly as our driver.

The guide was very sharp. She narrated our history with flair as if she was talking about the history of her very own family. We started by entering the Middleside of the island as we went through the arch that bore the name “War Memorial Zone”.

Our tram passed by the Youth For Peace campsite. Behind the open wide field were the ruins of the old YMCA building. Our first stop was the Ruins of the Middle Side Barracks. Some of the columns were already eaten up by tree roots. But the Corregidor Foundation, the one taking care of the island, had to cut them down to preserve the structures.

The tram then took us to the Battery Way where some of the largest cannons were located. The toilet was bombed during the war that a large chunk of the debris was stuck in a tree trunk. Railroad tracks were still visible which were used during the war period to transport goods and armaments around the island.

The garrison at the island.

We were given ten minutes for each stop. The driver would ring the bell whenever the time was up and we would all load the tram.

We passed by the Ordinance Repair Shop on our way to the Battery Hearn. There was a large cannon that stood in the middle of the ground with a large crater nearby as evidence of the war.

We have arrived at the topside of Corregidor. The structure that greeted us was the Mile-Long Barracks, although it wasn’t exactly a mile long. Still, it was considered as the longest military barracks. Across the barracks were the parade grounds where the American paratroopers landed. There was also a memorial on the Rock Force located near the ground.

The tram took us all the way to the cliff where we were able to see the tail-end of Corregidor. From the there we walked towards the Eternal Flame of Freedom which was a red steel sculpture that symbolized freedom that the soldiers fought during the war.

The eternal flame of freedom.

We walked between the walls of the Pacific War Memorial that led us towards the dome-shaped chapel. The circular altar stood at the middle directly beneath the opening at the mouth of the dome. It was said that when noon strikes, the sun’s rays fall directly towards the altar.

Feeling the heat of the scorching sun, we sought refuge inside the Pacific War Memorial Museum where memorabilia, photographs, miniatures, and remnants of the old Corregidor were on display.

In front of the Museum was the Cine Corregidor ruins where famous movies like “Gone With the Wind” were once played. In between Cine Corregidor and the Bachelor Officers Quarters was the statue of Brothers in Arms where an American soldier was aiding an injured Filipino soldier.

After 30 minutes of exploring the Pacific War Memorial compound we climbed higher towards the old Spanish Lighthouse, considered to be the highest point in the island. Below the lighthouse was the Spanish Museum. Its small plaza was surrounded with souvenir shops and at the middle was a street sign pointing to various cities in the world. At present, there were also structures erected within the vicinity, like the radar and the solar panels.

On our way back to the Bottomside, we passed by the Spanish flagpole from a Spanish Warship that was captured by the Americans led by Admiral George Dewey. More ruins appeared in our route until we reached the area where several monkeys were swinging from one tree to another.

We passed by the San Jose Chapel and the Gift of Trees tree planting site. Across it was MacArthur’s statue at the Lorcha Dock which was his departure point en route to Australia. The Bottomside was where the docks were found. It included the old barrio of San Jose. The office of the Corregidor Foundation was also located here.

With a few minutes to spare, our guide took us to the old Power Plant and the Engineering Dock before we proceeded for lunch.

As part of the package, we were treated to a sumptuous buffet lunch at Corregidor Inn, the grandest hotel in the island (since it’s the only one, anyway). The lunch was part of the package tour. On a regular rate, the day tour, including the ferry ride and lunch, amount to around US$40 to $45.

After our lunch break, we continued to visit other attractions of this island sector. We first passed by Monkey Point where soldiers were once held in prison by the Japanese. Now, it’s a perfect spot for swimming and relaxing under the sun with a beautiful view of the three other islands belonging to the Corregidor island group and the rugged terrain of Cavite province.

Then we went to the Filipino Heroes Memorial where statues of former Presidents Manuel L. Quezon and Sergio Osmeña stood. Other impression of Philippine history was also on display in this memorial. We next stopped at the Japanese Garden of Peace that gave a breathtaking view of the sea. The garden was a memorial of the Japanese soldiers who died in the island.

The Japanese Garden of Peace.

Our last stop was back to the Bottomside via the Malinta Tunnel. It was a lights and sounds show that started at the East Gate of the tunnel. Inside this long stretch was once the seat of the commonwealth government under President Quezon. This is where he and President Osmeña were inaugurated during the beginning of their respective terms. The tunnel was also used as a hospital and various facilities that lay hidden from the eagle eyes of the enemy.

The show demonstrated the life at Corregidor and how the island shaped the history of this country and the whole world during World War II. It ended with the playing of the Philippine National Anthem with the Philippine Flag raised proudly near the East Entrance of the tunnel.

The laterals and sub-laterals of the tunnel could only be explored by tourists staying overnight in the island. However, it’s not for the faint-hearted. Sightings of ghosts and other odd happenings had been reported by various visitors of the island.

Finally, I’ve toured the entire Corregidor island. It’s wonderful to walk back to history and appreciate the fruits of our ancestors. Now, a new dawn has begun in our country.