A Journey to the Shire: The Land of Hobbits 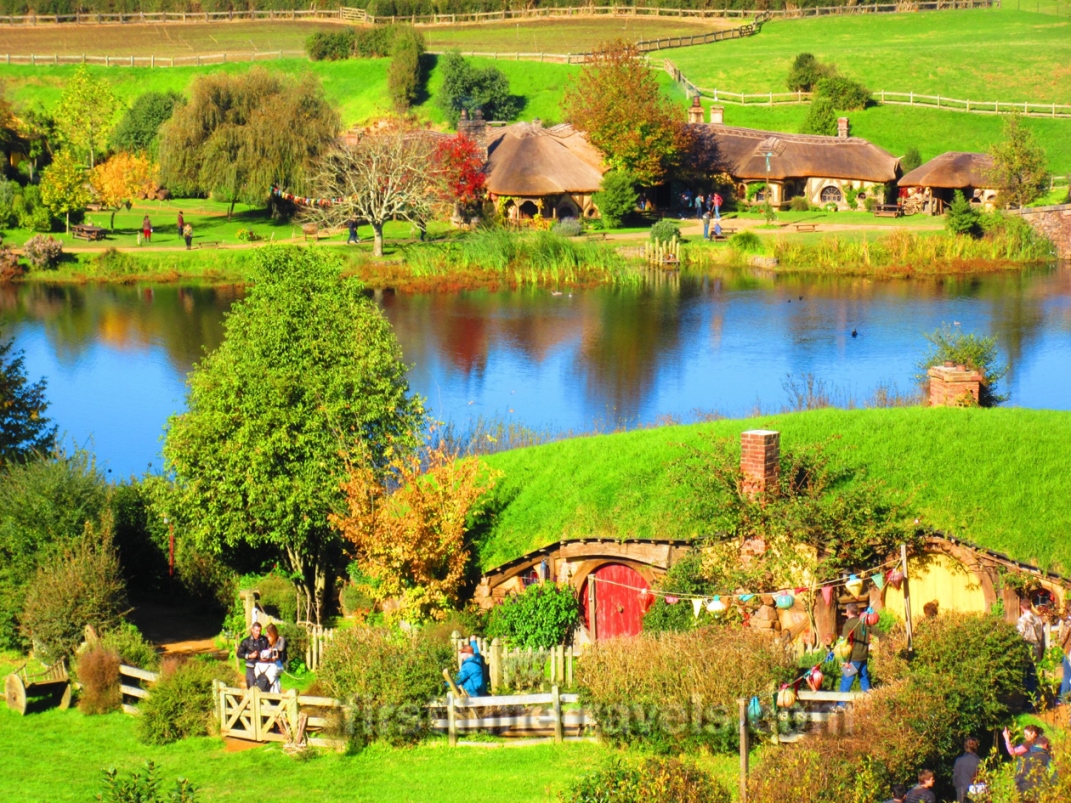 Short as it may be, my five-day New Zealand trip has taken me to Middle Earth (Hobbiton), made popular in the Lord of the Rings and The Hobbit novels and movies; the Living Earth (Rotorua), where geysers abound; and the Under Earth (Waitomo), the magical world beneath the caves. (I’ve only read the reference to these “earths” in a tour brochure.)

It’s no secret that Middle Earth is very real. More and more adventurers are already finding their way to this place. If you’re in New Zealand, it is a must to walk the very soil where Frodo Baggins and his companions once stood. Despite the price (I got a Hobbiton-Waitomo tour at NZD 269.60 or USD 190.00 through Viator.com), I felt I had to go to the land of the Hobbits to make my New Zealand journey complete. And so I did.

On The Way to Hobbiton

The day after we arrived in Auckland, we got up early to wait for our bus to pick us up at 7:15 am in front of our hotel, the Grand Windsor Hotel, along Queen Street. We made a short stop at Sky City to get the other passengers booked in InterCity, the local partner of Viator for this tour. Though one of our companions got separated for us at first as he booked through Great Sights, it was fortunate that he was able to still join our bus. It was also here where we met another Filipino family — Ruby Cruz and her husband and three sons were also in New Zealand for the holiday. I was surprised that Ruby was also from Bacolod and an alumna of the University of the Philippines in Diliman, just like me.

Me with Ruby Cruz (left), whom I only met there at the tour.

We left Auckland at 8:00 am and headed south via the Southern Motorway, passing through Bombay and heading towards the Waikato region, which was covered in fog as we descended from an elevated terrain to a downward slope. When we entered the region, we were inside a blanket of clouds that made us experience winter in the North Island. Every now and then, the scenery would change from clear and sunny to white and hazy.

See the fog? It’s like a blanket covering the meadows.

After a few hours, we entered Matamata and rode through it. The bus turned to Puketutu Road towards Buckland Road where we were dropped at the Shire’s Rest Cafe and Function Centre at around 11:00 am, making it about three hours of travel from Auckland to the entrance of the Hobbiton Movie Set Farm. We had a few minutes for bathroom break, coffee for those who wanted some drink, and souvenir shopping.

Our guide, Kate (which sounded like “kite”), hopped in the bus and started with a few tidbits about the place. The Shire, as it is referred in the movie, is located in a farm owned by the Alexander family. The farm is 1,250 acres or 500 hectares in land area and was personally handpicked by Sir Peter Jackson as the home of the Hobbits for his movies.

Kia Ora! Welcome to the Shire!

Here are some information of the place as stated in its website, Hobbiton Movie Set.

“Site construction started in March 1999 and filming commenced in December that year, continuing for three months. Below is a summary of the major components that were needed to create the Hobbiton™ Movie Set:

The set was rebuilt in 2011 for the feature films “The Hobbit: An Unexpected Journey”, The Hobbit: The Desolation of Smaug, and “The Hobbit: There and Back Again”. It is now a permanent attraction complete with hobbit holes, gardens, bridge, Mill and The Green Dragon™ Inn.”

Yes, it’s still a functioning farm, with cattle and sheep scattered around the hills within the property. Kate went on to point out places where tents were built for the actors, the crew, and the kitchen staff.

The bus stopped at the car park and we got off. We started on foot and this is where the real tour began.

Being there felt so surreal.

“In a hole in the ground there lived a Hobbit. Not a nasty, dirty, wet hole, filled with the ends of worms and an oozy smell, nor yet a dry, bare, sandy hole with nothing in it to sit down on or to eat: it was a Hobbit-hole, and that means comfort.”

― Opening lines of The Hobbit

A sunshiny winter morning at the Shire.

The bridge and the Green Dragon Pub at the other side of The Water.

We trailed after Kate as she kept on sharing information and trivia about the place and their significance in the movie and the J.R.R. Tolkien novels. We paraded along the path to Hobbiton through Gandalf’s Cutting and the whole Shire suddenly came before our very eyes.

I won’t go into details and spoil the whole tour. Who knows, you might just take it someday, too. But everything Kate shared with us were interesting, especially those behind-the-scene facts you’d never find in any other literature.

Bag End, as seen from below.

Remember that scene in LOTR when Bilbo posted this notice on his gate?

I waited for Bilbo or Frodo to come out, but nada. Hobbits are a shy bunch, you know. 😉

We went around from one house to another, through the garden and pond, up the hills, via winding paths, until we reached Bag End, the very home of Bilbo and Frodo Baggins. The green door and the tree on top of the hole looked familiar as I have seen in the movies. Standing by its gate with my back to Bag End and looking at the breathtaking view of the Shire below me was all so surreal.

We continued with our tour stopping by some holes along the way. It was interesting to know the personality or livelihood of the family owning the house just by its front yard. There was a carpenter, an artist, a gardener, a baker, etc.

Preserves just outside the house. Guess what this Hobbit house owner does for a living?

A cheese stand outside this Hobbit hole.

Finally, we got to the party field. The area is the setting during Bilbo Baggins’ birthday party at the Lord of the Rings movie. The Party Tree stood tall in the field of green. The Water, or the small lake was visible from afar. We hiked through what seemed like a marshland and we got to the Watermill, the start of the bridge that leads to the Green Dragon Pub.

Where’s the party? Photo taken by Allandale Antenero from my camera.

I can see where the party is going to be held.

The bridge to the Green Dragon.

Stores near the Green Dragon.

We walked inside the inn and I chose my drink, Sackville™ Cider, an apple cider, which was taken from the barrels inside the inn. Other drinks were Girdley™ Fine Grain, an Amber ale; Oatbarton™ Brew, a Traditional English Ale; and Frogmorton Ginger Beer, a non-alcoholic Ginger Beer. These drinks were specially brewed for the Green Dragon.

There goes my drink.

After warming ourselves by the fireplace and halfway through our drink, we were told to proceed to the party marquee by the side of the Inn where we would have our lunch. The yellow canvas of the tent and the glass tube decorative gas patio heaters were enough to make us feel warm in this winter day.

Lunch is in this party marquee.

Lunch was buffet and as much as I wanted to try all the food, we only had limited time and still had a long way to go to our next stop, the Waitomo Glowworm Cave, which I’ll blog about in our next post.

So, have I spotted some Hobbits in the area? Last time I heard, they are shy of Big Folks, which is why they were nowhere to be found during our tour. But, I am no Big Folk. In fact, I believe I can pass up as a Hobbit myself. ☺

I look tall! Am I a Big Folk? Photo taken by Camille Anne Morales from my camera.

No, I am really a Hobbit. I live in this hole, you see. 😁 Our guide, Kate, took this photo from my camera.

(Check my Facebook page for more photos. All photos are owned by the author and must not be used for other purposes without permission from the blog owner.)

30 thoughts on “A Journey to the Shire: The Land of Hobbits”