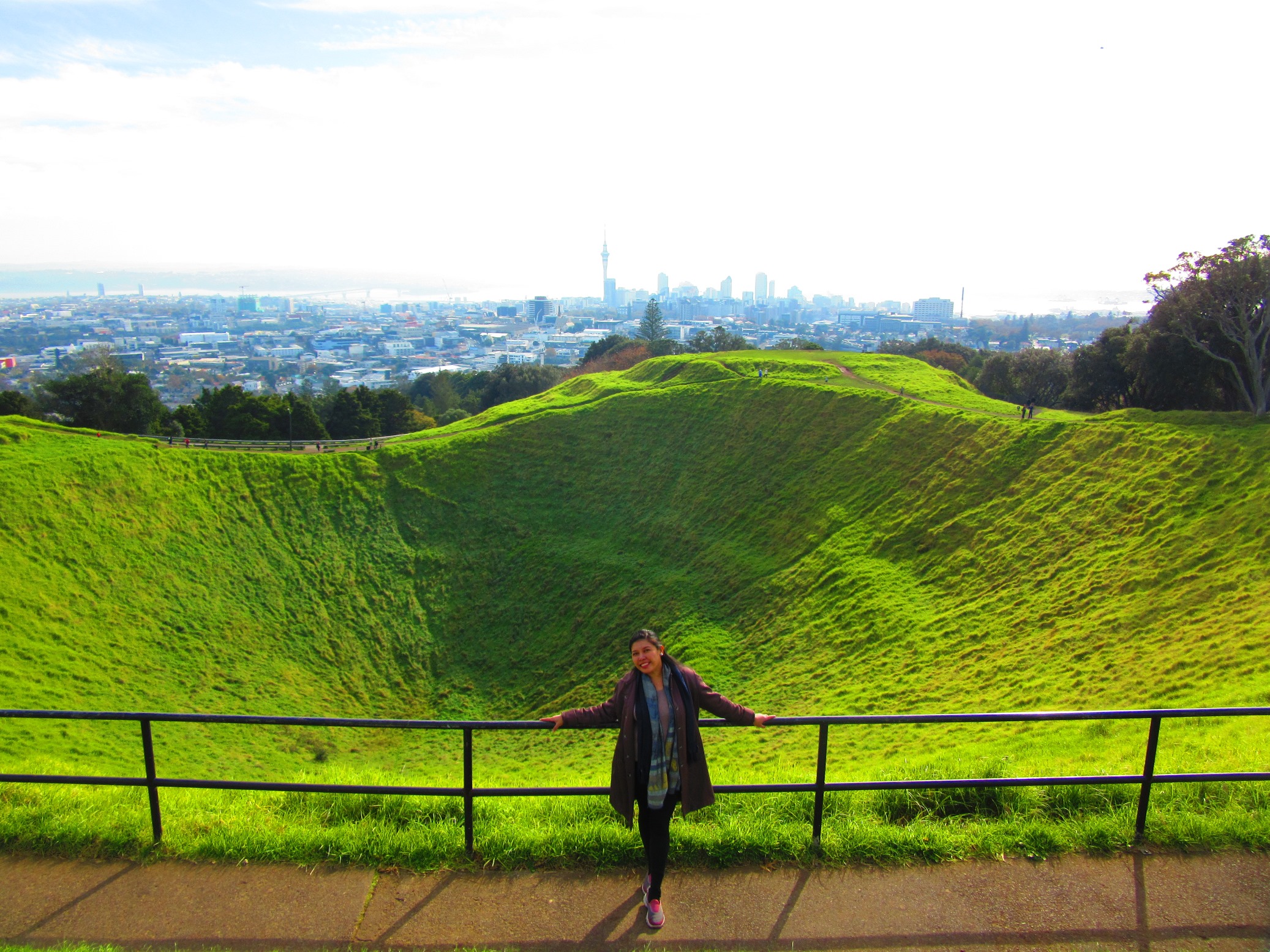 When we listed down the places we wanted to see in Auckland, Mt. Eden was among those that constantly popped out in our chats and the research I made. My former Habitat colleague, Thelma, with whom I had constant communication prior to my actual trip asked me, too, where we were heading during our third day in New Zealand. I instantly blurted out “Mt. Eden”. But she informed me that buses plying in that area only unload passengers at a certain point and we had to hike inside the area to the summit.

I heard her sister, Emmy, tell her at the background that they could bring us there then we could be on our own. I felt some relief knowing that there would be friends who can help us navigate through unfamiliar territories.

After they picked us up from our meeting point, they brought us around certain areas of the city center before we headed to Mt. Eden.

Most of Auckland’s attractions are named from people who made a mark in its history. Mt. Eden, for one, is named after George Eden, the first Earl of Auckland. Apparently, this dormant volcano’s peak is the highest natural elevation in the whole of Auckland. Its last eruption is believed to have occurred 28,000 years ago.

Hiking the summit of Mount Eden.

A marker found at the summit.

Though Mt. Eden also refers to the suburb, the volcano itself is often called as Maungawhau, which is a Maori word that means “Mountain of the whau tree”. They call the crater as Te Ipu-a-Mataaho, or the bowl of Mataaho, a deity believed to reside in the crater.

Friends of Maungawhau work with the Auckland Council in the preservation, protection, and protection of this heritage site and 47 other volcano cones found in the region. Some of their efforts have paid off. For example, tourist buses and cars used to drive all the way to the summit. Now, it is banned, so even us who arrived in a private vehicle had to park at the designated area and hike all the way to the top. We’re not complaining though because it is one way of maintaining the beauty of the place.

What To See and Do at Mt. Eden

When we hiked the paved path to the summit, we met some joggers along the way. There were those who were biking to the top, dragging some weights (40 Kilos!) while ascending Mt. Eden, and relaxing at the tree-lined slope.

The path to the top.

They were enjoying the view while at the Mount Eden summit.

Joggers find Mount Eden a good place to exercise and commune with nature.

A man sitting by the slope of Mount Eden enjoying nature.

The crater was a sight to behold. It was filled with green grass, a bowl empty of any water or sulfur that we often see in a volcano crater. Take note: no one is allowed to enter the crater. You can walk through its rim, where you can enjoy a 360-degree view of Auckland, with the city centre and the harbour visible from afar.

View of the city centre.

A few trees at the rim of the crater.

Descending from the summit. Photo by Andrew Russell Villena.

We stayed only for a while, after taking some snapshots, and went ahead to our next destination. But you can even spend a whole day in Mt. Eden.

1.) Take part in a guided tour

If we had the luxury of time, I would probably joined this guided tour wherein I would be able to learn about the storage pits, occupation terraces, and housing sites that will provide me with an idea of what a former Māori settlement looks like.

2.) Marvel at the flora and fauna

Did you know that there is a 5.5 acre garden on the side of Mount Eden? I didn’t know about it but I learned that it has won some accolades. It has a wide collection of colourful plants, as well as waterfalls, rock formations, and resident native birds, not to mention the fabulous city and harbour views.

Mt. Eden, the suburb, is known as the home of some of Auckland’s most exciting modern art, with a vibrant community of creative artists and writers. There are some art galleries that you can visit at the Mt. Eden Village.

If you are traveling as a family, Mt. Eden has amenities for children. There is a playground located near Normanby Road where kids can play on the slides, swings, push-train (for little kids), towers with bridges, and a flying fox and climbing net that is in the shape of a volcanic cone (for older kids). The whole area is cushioned for safety.

How to get there

By car: from downtown Auckland, go towards Upper Queen Street, turn left at Karangahape Road and right at Symonds Street, then left to Mt Eden Road. If you are coming from another location, get directions using Google Maps.

Vehicles are no longer allowed going to the summit. You can leave your vehicle at the lower car park on Puhi Huia Road and take the walkways at Clive Road, Batger Road, Glenfell Place, Hillside Crescent, Rautangi Road and Owens Road.

Mt. Eden is open to the public from 7am-8:30pm during summer and 7am-7pm during winter.

← Into the Waitomo Glowworm Caves ← Garden Hopping in Auckland