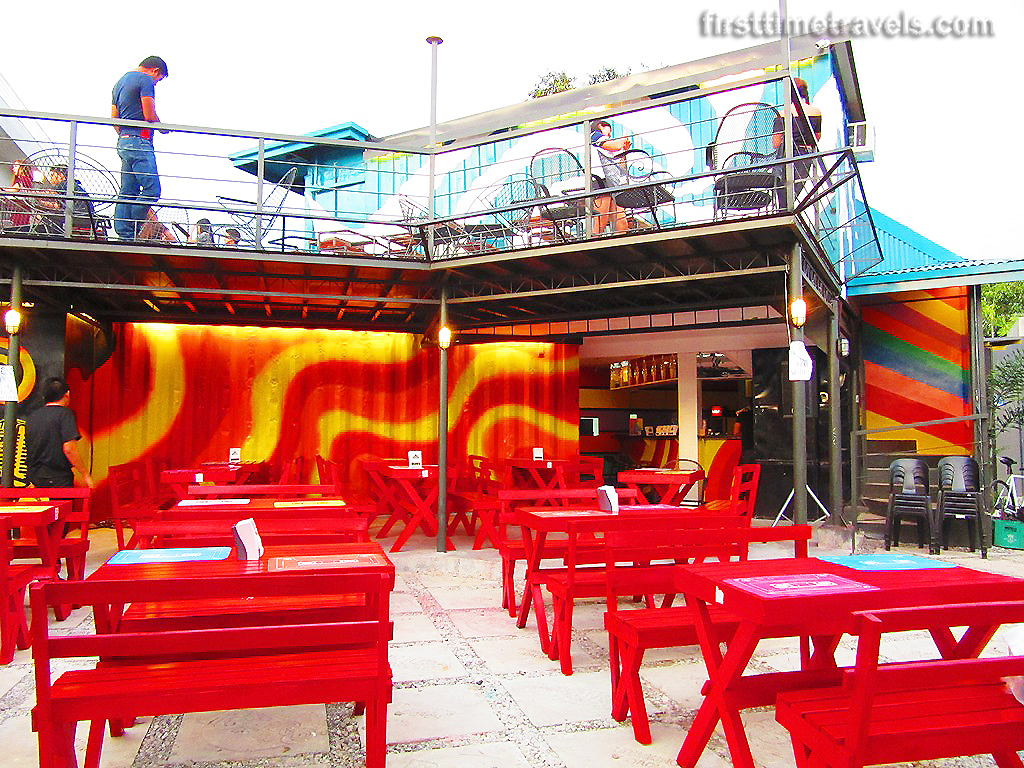 A burst of color painted on container vans fill the backdrop of Retro KTV. Would you believe that these giant containers have videoke rooms in them. This is a new hangout place in Marketplace East, near the Bacolod City Government Center. The commercial compound is a booming location composed of restaurants that offer some of the best in the City of Smiles.

The deck area, overlooking the rest of Marketplace. This is also a great spot for sunset watching.

At the foreground are bright red picnic tables and benches in an open-air space. Right along the foot path is the head of a bright red vintage 1970 Volkswagen Beetle.

That beetle has a cute name: Barbie, short for barbie-cue-han. It’s a grilling corner of the restobar and, at the same time, is an art piece and photo frame. It was restored by Cooper Built solely for the Retro KTV.

Manuel Yulo Barandiaran, the man behind the Retro KTV, had this taken from a scrapyard into his bar. It’s a funky conversation starter that doubles as a culinary equipment.

The menu has interesting names. True to its brand of being a KTV place, the food are also inspired by songs or singers. You have Mariah Curry, Black Eyed Fish,  Imelda Papcorn, Apo Frying Society, Jose Mani Chan, and Bruno Marshrooms, to name a few.

We tried the Justin Beibercue or the barbeque skewers, Jessica Shrimpson or sizzling gambas, Alicia Cheese or mozzarella cheese sticks, Alalalalalong or calamares, and On the Wings of Love or chicken wings.

We also had some cocktail drinks like the Mudslide or frozen chocolate cocktail and the Mojito. There are more to try but it means we can always come back some other time for the other dishes and beverages on their menu.

The Mudslide is really a must-try!

Drink till you get to the bottom part of the bottle. It gets yummier as you drink for more.

The Mojito is sweet, just right for my taste.

I like the ambiance and the rooms at Retro KTV. Apart from the open air grounds, there is also a deck at the second floor. The rooms are beautifully painted with various artworks and each room has a color to represent.

Some of the rooms even have pole for pole dancing. The tables are painted to look like giant cassette tapes. Everything is really well thought of, including the high chairs and tables.

Want to do some pole dancing?

Look at this table! It looks like a giant cassette tape!

Sing it out loud! The colorful area by the stairs.

Because of his number of years in the bar business, Manuel is now dubbed as the Drinking Coach. He had an events company in Manila and worked in a major hotel chain in Shanghai, China. I can consider him as a genius when it comes to branding and marketing, with how he has tied everything together to inject his brand in his bars and restaurants.

The Drinking Coach has also spruced up Bacolod’s already colorful nightlife with his Garaje, Bounce Mobile Bar, Botella, and the most recent is the Retro KTV. He has also other restaurants, such as Mr. Shooli and My Big Fat Shawarma.

The Drinking Coach with Barbie.

A few walk from Retro KTV, still within the Marketplace, is Botella. It’s a bar and one can truly say it’s a place for men. The mural art is eye-catching. The tables, according to Manuel, were made to appear rustic, which is very masculine.

The bar top is filled with bottle caps while the high chairs look like giant versions of those. The lights are placed inside wine bottles while the chandelier are beer bottles. I was really amazed at how he designed everything and have connected everything to bottles.

Are you going to swing on this chandelier?

Colorful effect from the bottles at the bottom of the bar counter.

The same can be said of Retro KTV. So, next time you’re in town and want to have a great night out with friends, head over to the Marketplace and sing your heart out at Retro KTV. Take your pick among the fancy-named food and drinks. Get into the groove and then dance the night away.