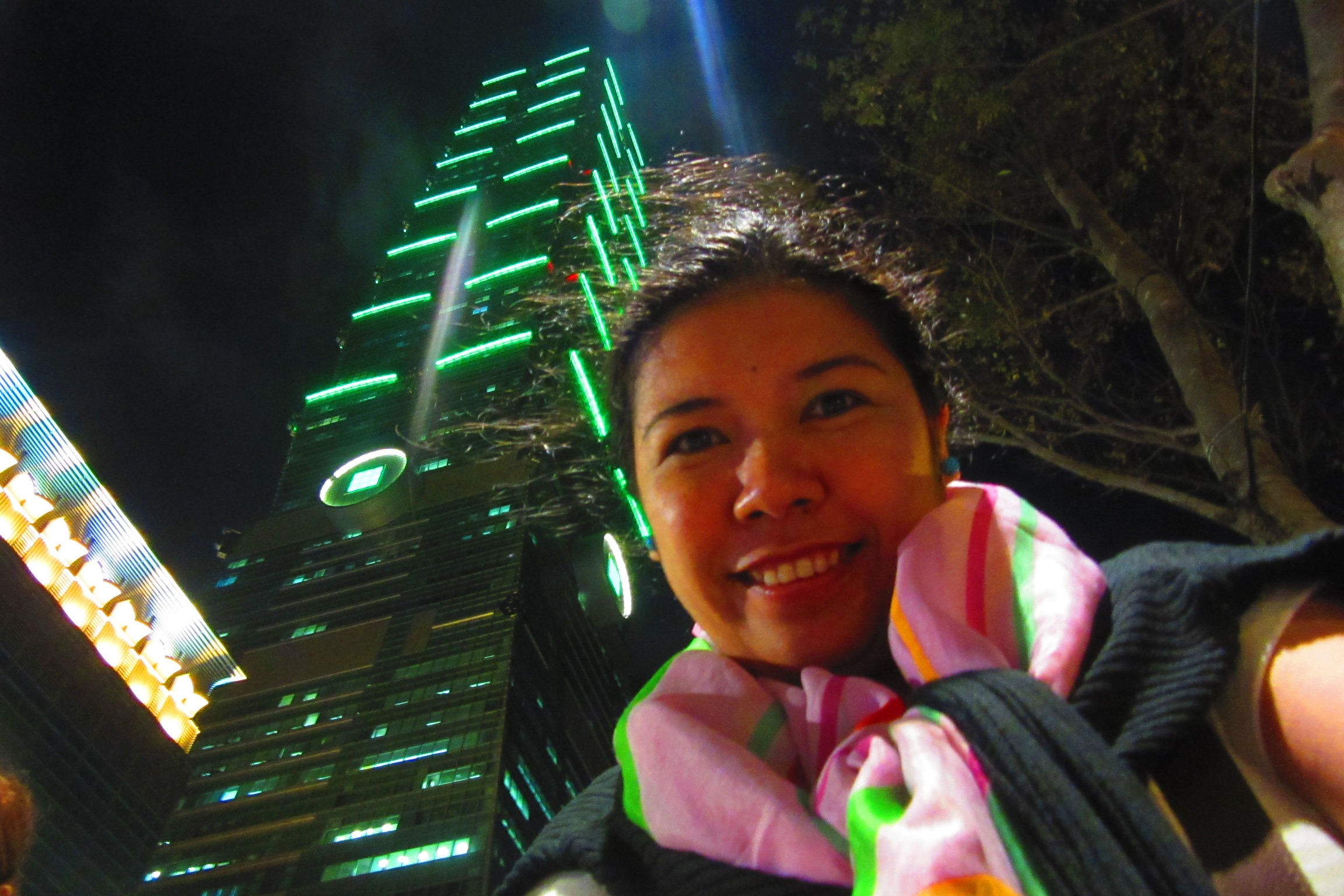 As soon as the sun was about to set, we rushed via MRT to Taipei 101 to see this popular Taiwan landmark transform from daytime to nighttime. The 508-meter, 101-story structure was the tallest in the world when it was inaugurated in 2004. Its reign ended in 2010 when it was surpassed by Burj Khalifa in Dubai, UAE.

The Taipei 101 is an imposing structure in Taiwan.

While in the train, Taipei 101 could already be seen from afar, the bamboo-inspired skyscraper dominating Taipei’s skyline.

Taking the MRT red line (Xin-Yi Line), we got off at the Taipei 101 station which led us to the B1 floor of the building. There, the famous Din Tai Fung Restaurant came to our view.

Taipei 101 extending to the heavens.

Din Tai Fung at the bottom of the towering figure.

We went to the Taipei 101 Observatory counter to inquire and we were instructed to go to the 5th floor where individuals buy tickets to get to the Observatory.

The line to the observatory.

The fee to get to the Observatory costs NT500 per person, a bit pricey for us. Plus, the line outside the elevator was so long and the weather outside was cloudy (which meant we won’t be seeing any view, anyway). We decided to forego climbing the Observatory and settled to having dinner at Din Tai Fung.

We lined up outside the restaurant and was assigned a number. And while waiting, we were given the menu and an order form. It took only a minute before our number was called and we were led inside the restaurant, through rows of tables, going deeper till the end of the expansive eating haven.

The team getting busy preparing the food.

We had seaweed and beancurd in a vinegar dressing. We also had pork xiao long bao (soup dumpling) and chicken xiao long bao. Since there weren’t much meat dishes, we ordered steamed chicken and a rice topping with pork chop. We also had plain white rice and fried rice.

After dinner, darkness has enveloped the sky, save for the lights coming out from Taipei 101. Traces of clouds can be distinguished as reflected by the building lighting. We crossed the street to get a better view of the towering structure.

The view from the ground was more magnificent, and we were content to just watch the modern bamboo stood straight to the heavens. View our photos in my Facebook page albums of Taipei 101 and Din Tai Fung.

Taipei 101 is lovely even from afar.