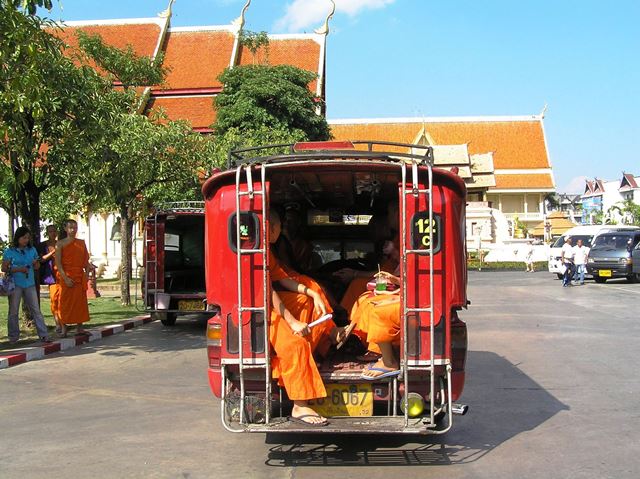 Chiang Mai is home to one of the old Thai cultures, as seen in the many heritage sites in the city. In fact, the old square alone has several ancient temples that reflect the Lanna culture.

My last trip to Chiang Mai was more focused on business travelling and we never had so much opportunity to visit the temples. I didn’t mind because I have visited five temples there during my 2010 trip. But on our last day, as we were the last batch to fly out of the city, our hosts told us that we can roam around the city, visit the umbrella making center and drop by in one of the temples.

I kept my silence hoping that it won’t be a temple I’ve been to before. But I instantly felt guilty as I might be a bit selfish for thinking that way, I thought that if ever it happens, I’d happily show my fellow visitors around.

As we passed by Dhara Dhevi, I heaved a sigh of relief knowing that the temple we would be going to was something I’ve never set foot before.

Wat Buak Krok Luang’s compound was not as large as the previous temple grounds I visited four years back. At the far right of the area, there was what looked like an excavation for a new building that had to be constructed.

The temple itself was of medium size. Yet, do not be deceived by the area because Wat Buak Krok Luang, or what was also known as Wat Muang Kham, is one of the significant temples in northern Thailand.

Old documents have already mentioned the temple since 1822. It has undergone several renovations as it was continuously restored by Lanna royalties. Its design was an interesting example of northern Thailand architecture, depicting details and materials that are characteristic of the indigenous Lanna Style. At the entrance, serpents with bird beaks were found on both sides of the steps. Inside the temple, an interesting mural that tells about the life of Buddha filled the walls.

Mural paintings inside the temple’s walls.

In my familiarization trip in November 2010, I had the good fortune to enter several other temple grounds that also play a part in the history of Thailand. Here are the religious sites that I have visited.

Constructed by King Phayoo of the Mengrai dynasty, Wat Pra Singh, which is also known as Wat Lee Chiang, is an important temple in Chiang Mai for over 700 years. The site of the temple is said to be the very spot where the chariot bearing the Buddha image broke down at the time when King Mahaprom ordered the image to be presented to the Chiang Mai king, King Saen Muang Ma of the Lanna Thai kingdom.

After several reconstruction and restoration processes, the wat was given the status of royal wat in 1941. The temple houses the Buddha images Pra Buddhasihing and Pra Thongtip.

Inside the temple, devotees come to pray.

The chedi at Wat Chedi Luang was the tallest structure in Chiang Mai for over 500 years before it was destroyed in an earthquake. The temple was built by King Saen Muang Ma as a place where he would enshrine his father’s relics. Construction began towards the end of the 14th century but it was King Tilokarat who was able to see its completion.

The chedi still rises behind the temple.

Still, under reconstruction, the remnants of Wat Chedi Luang is still impressive. Elephant structures surround the middle level of the chedi. Inside the temple grounds are also Wat Pan Tao, the city pillar, the assembly hall, the Mahamakut Buddhist University, the Yang tree, and other prayer halls.

Wat Chiang Mun is said to be the first royal temple that was constructed in the vicinity of Chiang Mai’s old city area. The temple compound houses the white quartz image of the Buddha called Phra Setangkamanee or Phra Kaew Khao.

Also found within the temple grounds is a stone inscription that dates back to 1581, detailing the historical records of Wat Chiang Mun and Chiang Mai. The elephant-surrounded stupa called Chang Lom is more than 700 years old and considered to be the oldest and most significant stupa inside the compound.

This is said to be the temple where the 10 monks from Burma who were invited by the sixth Lanna King of the Mengrai dynasty stayed. They were asked to deepen their study of Buddhism in his kingdom. Although it was not indicated when the temple was actually built, historical records first mentioned Wat Lok Molee in 1367. In addition, the chedi was built in 1527 through the orders of Phra Kaew Muang and the main hall was erected in 1545.

The entrance to Wat Lok Molee.

This temple is also significant because this is where the ashes of the Royal Mengrai Dynasty members were kept until the end of the dynasty.

The temple and the stupa behind it.

Wat Lok Molee is distinct because of its intricate design on its façade and the materials are made of wood.

The intricate design on its wooden facade.

Located on the mountain of Doi Suthep, this temple offers a magnificent view of the city of Chiang Mai. Legend has it that Sumanathera, a monk, had a vision where he was instructed to find a relic in Pang Cha. There at the site he found a bone, believed to be of Buddha, and brought it to King Dharmmaraja of Sukhothai. Although the king hosted a ceremony, he asked the monk to keep the relic. As King Nu Naone of the Lanna Kingdom heard of it, he invited the monk to bring it to him to which Sumanathera obliged with King Dharmmaraja’s consent.

Going up to Wat Phra That Doi Suthep.

As the relic divided into two, the king placed the larger piece at the back of a white elephant, which believed to have climbed Doi Suthep when released to the jungle.

The elaborate architectural design on its roofing.

From the entrance of the temple grounds, visitors can either climb the 309 steps to get to the main area or take a tram. Many pilgrims go to the temple, which is regarded to be a sacred site, to say their prayers or bring their offerings.

The golden stupa shines brightly under the sun.

49 thoughts on “Wats in Chiang Mai”