First-time in Beijing Outer Rings and Beyond 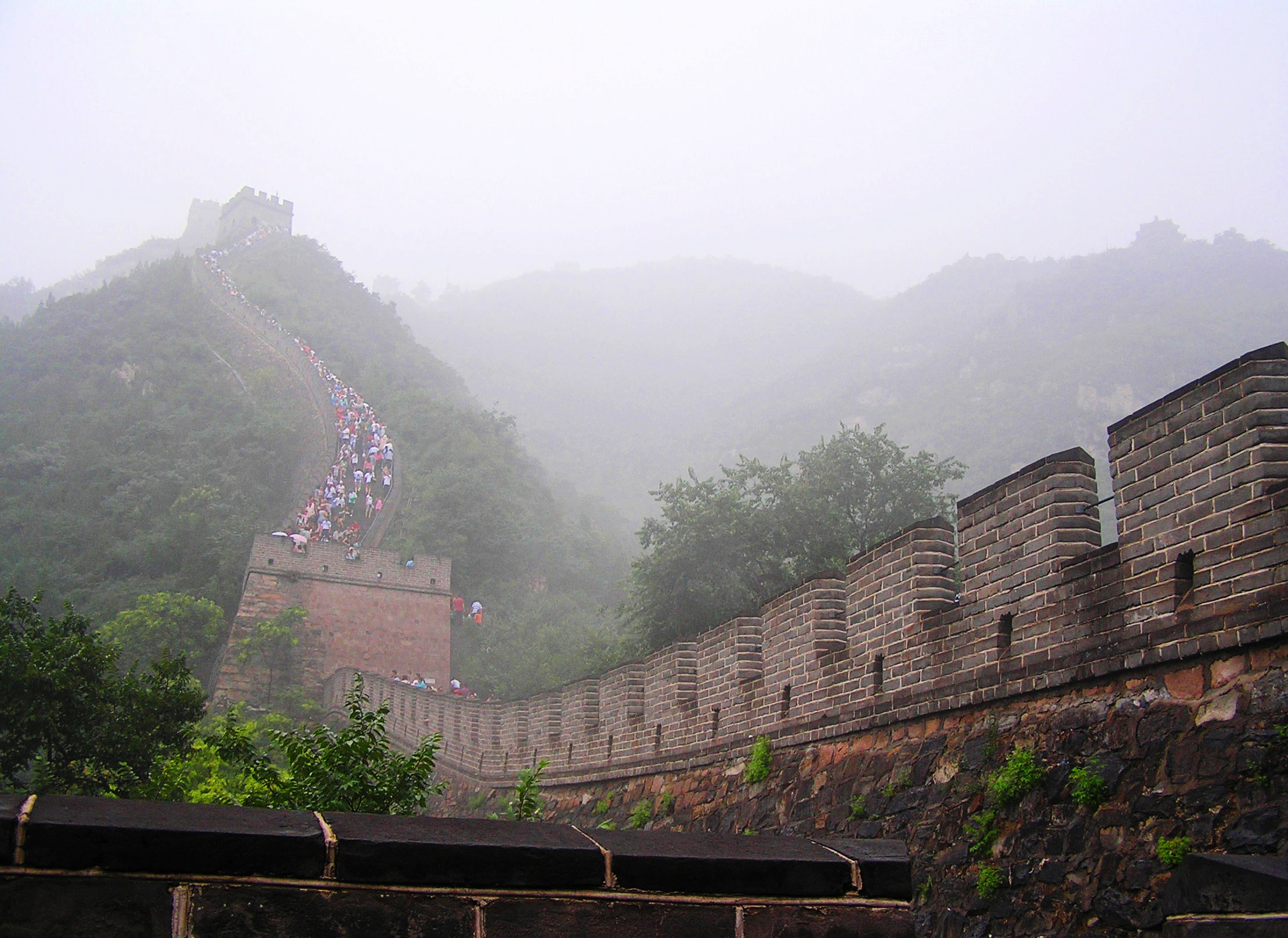 The morning was gray and gloomy with the drizzling rain seem to be stopping our great adventure to the outskirts of Beijing. We were to climb the Great Wall of China and we didn’t allow the weather to be an impediment to this important endeavor.

We were thankful that our hostel provided a cheaper Great Wall tour price compared with the other travel agents we contacted. For non-Chinese speaking tourists like us, we figured, it would save us time and effort to avail of those day tours rather than commute going to the various landmarks.

The Great Wall of China, as seen in the background, is wrapped in fog.

With our guide, Tony, we traveled aboard the private car provided for the tour for about an hour to the north of Beijing. As we left the skyscrapers of the capital behind, mountains emerged along the way. A little farther ahead, our vehicle moved at a slower pace due to the traffic jam. It seemed everyone’s en route to the Great Wall as well. Tony posed a decision-making question for us: to continue towards Badaling or to go directly to Juyongguan Pass, which was nearer. We asked for his advice and he said it would be easier for us if we take the latter. Besides, there were better infrastructures at Juyongguan Pass, according to him. We went with his suggestion and chose the nearer destination.

As we got to Juyongguan, restaurants and souvenir shops greeted us at the gate. When we gazed at the Great Wall, we were shocked by the waves of people that filled the entire length of the wall. Even in rainy weather, people still flocked to this globally renowned landmark.

It was a steep climb.

Juyongguan is said to be a military stronghold and many battles had been fought here. Tony said that because they needed to set up camp here, there were many facilities erected at the site. True enough, there was a village like place by the side of the Great Wall while at the other end was a temple and a bridge spanning a dam that connects to the other side of the river.

The wall extends to beyond what we can only see.

Its location between two mountains made Juyongguan as an ideal pass for various Chinese dynasties. I tend to agree that this has the most scenic spot in the Great Wall even when I haven’t visited the others. The still water and the fog surrounding the mountains were like a picture straight out of a painting. True, it wasn’t the best time for great shots, photography-wise, but it evoked a different sense of serenity notwithstanding the throngs of people going to and from, up and down the stretch of the Great Wall.

The gate where we had access to the Great Wall.

Realizing that the people wouldn’t go and we wouldn’t have better photos of the Great Wall, we opted to proceed to our next stop. We had lunch at a Jade Factory along the way. First, we went on a tour of the factory with the guide showing us the different kinds of jade, how they carve on it, and how to differentiate an original from glass and other imitations. Then, we were brought to the store, where we never purchased any of their products because of the steep prices. Finally, we went up to enjoy our sumptuous meal of Peking Duck and various Chinese delicacies.

It was still raining when we left the factory and another long journey to the Summer Palace. I never appreciated the Summer Palace because of the rain. I would have wanted to see its grandeur while the sun was out.

The lake was all white, except for the boats traversing around it. We learned that it was a man-made lake and the soil excavated from this spot was made into a hill where some of the structures were erected based on the Chinese belief of feng shui.

Tony took us through the palace grounds including the accommodations of the Empress Dowager Cixi who was believed to have wielded power during the term of her son and her nephew as emperors.

We walked the longest corridor located by the lakeside of the Summer Palace. It was truly grand. I hope it retains its grandeur and be well-maintained given its accessibility to the public.

A boat pass beneath a bridge.

Last stop was a silk factory. It was the most interesting as we witnessed and tried how to make comforters and blankets from cocoons. Silk is said to be durable and not prone to dust and lint.

It was a long, wet, and tiring day. But it seemed like we were transported back to ancient China when the emperors still ruled the land. It was wonderful to learn about their lives and to see the evidence of their lifestyle. More so, it is different to actually walk on those walls and those corridors than just reading them straight from the book.