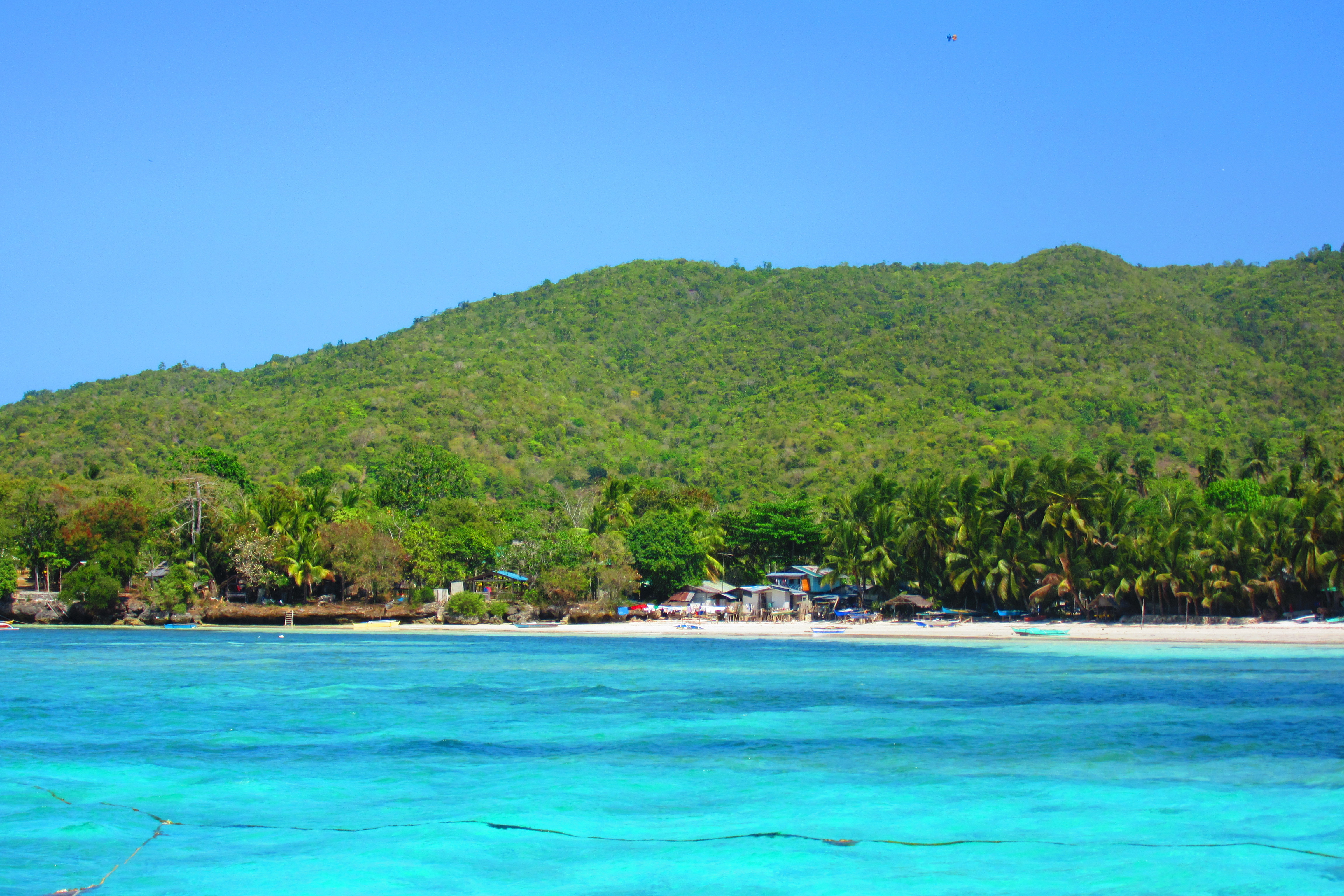 Siquijor is said to be a mystical island in the Philippines because of the presence of healers in this 338-square kilometer area. Even when I was kid I have heard a lot of these stories from our elders.

And while my sister and I were recently in Siquijor Island for the Holy Week, which was in time for the Healing Festival wherein herbalists and healers from various parts of the country converge in the villages of San Antonio and Cantabon for the ritual and the preparation of concoctions used for healing, we weren’t able to witness the said ceremony because our hired driver was not familiar of the mountainous part of the island.

See how welcoming Siquijor is from the port.

Word of mouth has it that the said tradition could be traced back in the 1930s, one of the reasons why Siquijor has earned its reputation of somewhat being a home to the supernatural, often discouraging travelers to visit this part of the country, a place that is said to be not for the faint of heart. But this has not deterred a lot of tourists to visit the island. In fact, many foreigners have already settled here, building resorts, restaurants and other facilities that provide tourist services.

People are finding their way to Siquijor.

This is no surprise though. Even during the time of the Spanish conquerors, Siquijor had attracted Esteban Rodriguez and Juan Aguirre, who were part of the Legaspi Expedition in 1565. At that time, fireflies lit the island as they swarmed around molave trees, thus, earning the name of Isla de Fuego (or “Island of Fire”).

But as we docked at the port of the town of Siquijor, the capital of the island-province of Siquijor, the view of its white sand beaches and the clear blue-green sea greeted us. It is no wonder why people are attracted to the island like moths to a light. Though there is no direct flight to Siquijor Island, travelers from different parts of the world come to this side of the world to enjoy its natural attractions.

Located at the central part of Visayas, Siquijor is that tiny dot at the foot of the sock-shaped island of Negros and the exclamation point of the vertical island of Cebu. It is the third smallest province in the Philippines and is composed of six municipalities.

Coming from Mabinay, we descend the mountains to Bais City, taking the coast to Dumaguete.

But in our case, as we came from Bacolod City in Negros Occidental, we traveled by bus to the other part of Negros Island, towards Dumaguete City, Negros Oriental.

There are three ways to get from Bacolod to Dumaguete: 1.) up north via Don Salvador Benedicto & San Carlos (245 km at app. 7.5 hours) ; 2.) the upper middle portion via Canlaon (271 km at app. 6.5 hours); and, 3.) the lower middle portion via Kabankalan and Mabinay (215 km at app. 6 hours). Unless you want to take the longer routes of going through the coast of Negros Occidental towards the south or through the northern part to the coast of Negros Oriental.

We took the yellow route to Dumaguete and took the red route on our way back.

The Welcome landmark at the port of Dumaguete.

We took the Ceres bus to Dumaguete via Mabinay at 4:30am, which cost about P278.00 (app. USD 6.00 at USD 1.00=P47.00) on De Luxe (non-aircon). Luckily, we were able to get the front seat, which they normally do not fill to avoid accidents. But as we were rule-abiding passengers, we wore our seat belts for the entire trip even when we were not told to.

The bus made a stop at Mabinay for breakfast and then arrived in Dumaguete at 10:30am. Since the bus passed through the Dumguete port, we got off at the bus stop nearest to it and immediately lined up (for almost two hours!) at the Oceanjet ticket booth for the 12:50pm trip to Siquijor. We paid P210.00 (USD 4.47) each for the ticket, plus P15.00 (USD 0.32) for terminal fee. Other ferry schedules with other shipping lines at that time were 3:00pm and 3:30pm.

As we arrived at the Siquijor port, we immediately bought our tickets back to Dumaguete at GL Shipping at P130.00 each to make sure we have assured seats for our return. Multi-cabs (small jeepneys), tricycles, and motorbikes (called habal-habal) lined up the port gate to pick-up passengers arriving at the port. Most of the multi-cabs had already been rented out by groups and we were afraid to take the motorbike with all our luggage behind our back. Our only option was the tricycle, but we were told that the tariff was P250.00 (USD 5.32).

People can take the habal-habal, or motorbike, by riding behind the driver or rent a motorbike.

Famished and still undecided on which option of vehicle to take, we first took our lunch first at the nearest restaurant. Then we got a tricycle from there and was able to haggle at only P200 (USD 4.26) from the Siquijor town to San Juan, where we would be staying. As he was meek and friendly and also agreed to tour us around the island at P1,000.00 (USD 21.28), instead of the usual P1,250.00 (USD 26.60), we got him to take us to our accommodation at the San Juan Community Development Cooperative (more on this in my succeeding posts) and to tour us the next day. We also contracted him to pick us up on the fourth day from our lodging to bring us to the port, also at a P200 rate. (Our driver’s name is Nonoc and he could be contacted through his cousin at 0928-6710277.)

Tricycles (left) and multicabs (right) are some of the mode of transport in Siquijor.

The day after, Nonoc picked us up at our desired time and brought us around the island. These are some of the places we visited, which I will write in detail in my next blog posts:

The San Isidro Labrador Convent is one of the religious and heritage sites in Siquijor.

On our third day, as we wanted to just hang out by the beach, so we didn’t get Nonoc’s services. Instead, we decided to just hail a tricycle along the way.

As we went out of our lodgings to the highway, we saw a tricycle and asked him to take us to the nearest beautiful beach. He agreed to take us to Paliton at P50 (USD 1.06) for the both of us already. We told him to pick us up at noon, but he didn’t arrive, so we had to walk from the beach to the highway and there we hailed a tricycle to a restaurant located halfway to our lodgings. We paid him P40 (USD 0.85). But after our lunch, on our way back to our accommodation, the last tricycle only charged us P20 (USD 0.43).

Our ferry back to Dumaguete. This is a smaller one as this is a motorized boat.

Since it was the holy week, we also participated in the church proceedings during Holy Thursday, visited the churches on Friday (along with other sites), and attended Easter Vigil on Saturday night, then headed home on Sunday morning.

On our way home, we took the coast of Negros Oriental towards San Carlos City, Negros Occidental.

It was a pleasant stay in Siquijor. The four days we allotted were just right, even when most of the travelers I knew stayed there for only two or three days. It was a chill and easy itinerary, enough to relax and recharge for the long land trip that we embarked.

Especially on our way back, as we took the Ceres bus from Dumaguete to San Carlos, then changed bus at the San Carlos terminal for another one that is bound for Bacolod via Don Salvador Benedicto. It was for the change of scenery, despite the longer route. The trip was all worth it, given the beauty of Siquijor, which will always be ingrained in my memory.

The blue waters and white sand of Siquijor will always be in my mind.

16 thoughts on “First-time in Siquijor Island”