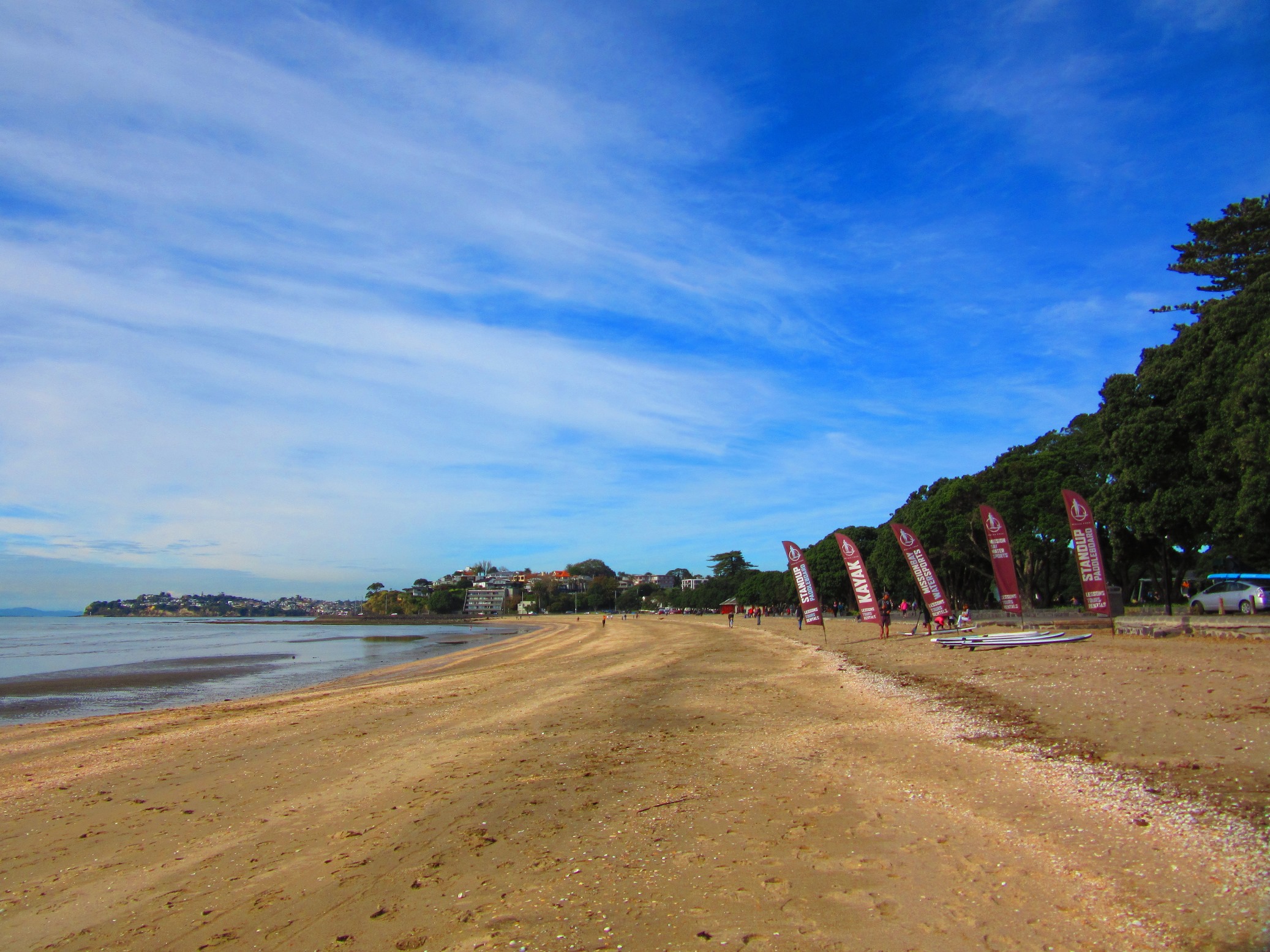 Auckland is known as the City of Sails. Pictures of yachts and boats parked side by side are a common sight in this city. We spent some moment looking at them from the harbor and the wharf. They were lovely to watch from the parks overlooking Waitemoto Harbor, but they were even more relaxing when you are by the beach.

Since it was winter time in New Zealand, the cold chill could be felt in the breeze. Yet, the beaches were not isolated. There were still families spending some bonding time in the sand.

Though there are rows of restaurants along Tamaki Drive in Mission Bay, we opted to spend our lunch at the Mission Bay Reserve or Selwyn Reserve, an open space of green grass, and we chose a table just near the Mission Bay Fountain or Trevor Davis Memorial Fountain, where birds were flocking for a drink and people were enjoying the water. The fountain has been around since 1950 and has been restored to maintain its beauty. There are plenty to see beyond the reserve and one can really spend the whole day just exploring Mission Bay.

Mission Bay is near Michael Joseph Savage Memorial Park. We took Tamaki Drive, passed by Kelly Tarlton’s Sea Life Aquarium (which we never got to visit), and the beach was there. We parked inside an enclosed area so we could walk around.

The green grass by the beach.

The fountain up close.

Emmy and Thelma Cruz, our hosts for that day who graciously offered to take us around, bought some fish and chips for our lunch at the Mecca Stonehouse, which is within the park compound. It was a good thing that they have picnic items stuffed at the back of Emmy’s car. Surprisingly, I really had my fill of fish and chips, along with french fries and fried sweet potatoes. There seems to be some secret formula in their ketchup as well as I couldn’t keep myself from taking a dip for my fries.

Surrounded by the birds. Photo taken by Russel Andrew Villena from my camera.

It was a fun lunch as we were surrounded by birds. When we could no longer finish our food, we fed it to them. (I’m not sure if we should have done that, but they were everywhere so we thought of giving our excess food to them rather than dumping it to the garbage.)

There was a cushioned playground for kids, complete with slides and swings. At the beach, there was an instructor teaching some women how to paddle board. Others were walking their dogs, some were biking, skateboarding and jogging, while moms and kids were playing with the off-white sand. It was a lovely sight. There were others wo were simply walking on the sand. I tried walking, too, as the sea was pushed back and there was plenty of space to walk around. At one point, we sat by the beach and watched the other side of the harbor where Rangitoto Island and Devonport could be seen.

Mom and daughter playing with the sand.

To get to Devonport, we drove through Harbour Bridge to get to the other side of the bay. Devonport is dubbed as “the charming seaside village just minutes from Auckland City” and rightfully so. It is indeed charming. Again, we could have spent one whole day here but with limited time, we compressed everything for just an hour or less.

We drove around, seeing local businesses and homes. It was a peaceful place in Auckland. Then we stopped by the beach near the port. One of our companions, who had to meet a friend at the city centre, took the ferry back, which is just 10 to 12 minutes to the wharf near our hotel, as the rest of us had to go somewhere after.

Waiting for sunset along the beach of Devonport.

We walked the beach, a bit off-white, like the one in Mission bay. There was a family strolling. Two young girls were playing at the public shower located at the seaside. It’s good that they have this because it is useful to those who swim at the public beach. I walked to the small port and enjoyed the view of sails at the harbor.

Watching the sails go by. Photo taken by Camille Anne Morales from my camera.

There were shops and restaurants across the port. The architecture of the buildings are nice, with a touch of history. Thelma told us that the structures that were built had to abide by the contour of the land, so there were homes wherein you have to climb some steps and their gardens are on a slope. I could imagine myself sitting by one of the cafes, sipping coffee while enjoying the view and watching the changing colors of the sky as the sun sets at the horizon.


Seeing these two places in just few hours was really not enough. They both deserve to be explored from sun up to sun down. Of course, it would involve lounging by the beach. But we couldn’t swim though because the water was frigid (it’s winter, remember?), although it would probably be fun to swim there during the summer.

This is the beauty of Auckland. It’s a city but the beaches are just a few minutes away. And they are clean, by the way! These beaches, the natural attractions, and the gardens and parks make me want to live in New Zealand.

The Auckland skyline from the Harbour Bridge as we crossed it from Devonport.