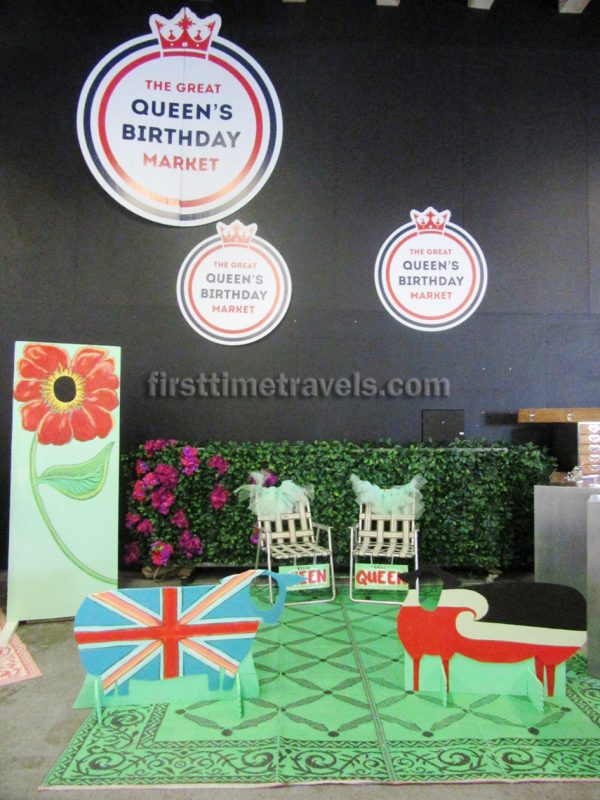 How fortunate are we to witness the Queen’s birthday celebration in Auckland, New Zealand while we were still there. In fact, it was the day we were to fly out, but we still enjoyed the holiday as the rest of the Kiwis.

The night before, my other co-winner Camille and I were watching the ceremonies of Queen Elizabeth II’s birthday in London over the television as we were having our dinner at a convenient store in Cambridge, New Zealand. In case some of you may be wondering, New Zealand is a constitutional monarchy and its head of state is the reigning monarch of the United Kingdom – Queen Elizabeth II.

On June 6, a holiday in New Zealand, we witnessed how people were celebrating Queen’s Day. It wasn’t her exact birthday but New Zealanders mark the first Monday of June of each year for the queen. As we were walking towards the Ferry Building across Quay St., we saw a mini-fair for kids at an open air space within the Queen’s Wharf area. Kids and their parents enjoyed the Ferris Wheel, the laughing clown booth, and other rides and games.

A Ferris Wheel and mini-fair behind the Ferry Building (lower right of the photo), just outside Shed 10.

A modern take on Merry-go-Round.

Father and son play in this Laughing Clown booth.

At a nearby building behind the pier terminal, which is Shed 10, we found a Queen’s birthday market, which featured different items on sale, including food, clothes and home products. There was also a DJ spinning some music by the entrance of the bazaar.

Have your photo taken here.

Interesting finds at the bazaar.

In the modern structure beside it, which they call The Cloud, there were music, interactive activities, games, and exhibits. Little and classic cars, one was similar to what Mr. Bean drives, were also put on display there. It was a fun day. We wanted to partake in one of the games if we weren’t rushing to our next stop.

The Cloud at night.

We wanted to play this, too.

After we shopped at the Countdown store nearby for chocolates and goods to bring home, Camille and I decided to spend our last meal enjoying some of Auckland’s delectable oysters. When I travel, I see to it that I taste the local food. (Sometimes, I spend on this, but you only get to travel every now and then and eating authentic local food must be part of the experience.)

The Viaduct Harbour with the Sky Tower at the backdrop.

An arch that has Maori influence.

From the Queen’s Wharf, we walked towards the Princess Wharf onto Wynyard Quarter, in search of the Seafood Market. But as we took the length of Quay Street towards Viaduct Harbour to Wynyard Quarter, we were amazed by the sights we saw – rows of sails parked at the harbor, mobile libraries, families biking and skateboarding, the beautifully designed Wynyard footbridge, love locks (which seemed pretty new), Maori arch, offices, the ANZ Viaduct Events Centre, parks and open spaces, art installations, and so much more.

The pedestrian foot bridge. It closes when sailboats pass the bridge.

This seems like a mobile library or bookstore that was set up at the Viaduct Harbour.

Love locks. Must be a new thing in this side of the pier because the locks are still few.

Seeing the rows of restaurants at this wharf, Camille and I were excited because we have seen the place from photos in the internet. It was lunch time and most diners were drinking beer there. (We saw a beercycle at Hobson Street near the Viaduct. It looks like a cart and it is Auckland’s original party bike pub crawl where about 16 people cycle together as they bring the pub on wheels to various restaurants around the city.)

Rows of restaurants at the Wynyard Quarter. I’ve seen this in many photos.

Restaurants are housed in this building. The tracks of the tram visible in the lower left of the photo.

A closer look at the restos.

We entered the structure that housed the restaurants and crossed the street behind it and there we finally found the Auckland Fish Market. A dozen of really large oysters cost NZD 19.99 (around USD 14.30 or PhP 670.50). We could have eaten them fresh but since we were to fly out that night and wouldn’t want to risk some indigestion while on the plane, we asked the kitchen to deep fry it for us. They charged NZ 1 a piece, making it NZ 12 cooking charge (about USD 8.60 or PhP 402.50). We didn’t mind, since oysters, especially of good quality, are really expensive back home.

The interiors of the Fish Market. Neat, huh?

We got a table at the open courtyard at the Fish Market. It’s the Restaurant and Courtyard Bar, which has a relaxing open air ambiance. They set the table for us and attended to our needs. We ordered a rice, which was in a small bucket, but were already too much for the two of us. Our deep fried oysters came and it was really delicious! The oysters melt in our mouth! When we got three each, we were already full because they were huge and filling. But, boy, they were the best oysters I have tasted!

The Courtyard Bar at the Fish Market.

These oysters were really the best! We had them deep fried. Don’t miss this when you’re in Auckland!

After our lunch, we still walked farther and saw the Westhaven Marina, which Camille has been wanting to visit and photograph. We also saw the Sounds of Sea, the Daldy Street Park, and the Wind Tree, all beautiful artistic attractions. On the other hand, I looked up and saw the sun with a full halo, a natural phenomenon when there are ice particles in the air. Must be the effect of winter.

Rows of sailboats at the Westhaven Marina. That’s why Auckland is called the City of Sails.

It’s the first time I have seen, and captured, a sun halo.

Our hotel was located in Queen Street so we have been walking around the area for the five days and four nights we were in New Zealand. Since it was a holiday, a basketball court was erected in front of the Britomart, and people were enticed to play.

A basketball goal was set up along Queen Street in front of Britomart.

This old structure is the famous Britomart.

Queen Street traces its history way back since 1840. No wonder the whole street was filled with old buildings – preserved and put to good use by utilizing them as hotels, shops or offices. Until now, this whole avenue is still the main strip in the city centre. It’s a shopper’s delight, although some say the cheapest won’t be found here.

Our hotel is also in a heritage structure. I took this from across the street.

But we’re not complaining. Louis Vuitton, Gucci, Chanel, Tiffany’s, Estee Lauder, Swarovski, and other luxury brands were our neighbors. And just beside some of these high-end shops were souvenir shops, which was a big convenience to us as we were able to manage a 10 minute shopping as we were about to leave for the airport.

Duty Free Shopping at the Galleria, housed in an old building.

A few blocks away are other attractions, like Sky Tower, Sky City, St. Patrick’s Cathedral, and the Civic Theatre. Interestingly, the CBD reminded me of downtown San Francisco because of its terrain. There are a lot to see in Auckland’s city centre. Queen Street deserve an entire day just to explore it.

The Q’s of Auckland

Queen Street. Queen’s Wharf. Quay Street. Wynyard Quarter. So many Q’s and it gave me more questions in the head that can only be satisfied with an answer if I explore Auckland more. But time was not on my side. I’m glad though that the calendar was aligned on Queen’s Day.

Note: All photos are taken and owned by this author. No reproduction or use of such photos are allowed. Contact firsttimetravel@hotmail.com for inquiries.